As a Venmo user, Margaret Keane has just one gripe: “It’s mostly money going out,” she says, laughing. “I rarely get any money coming into my account.” She had been using the app ever since her son introduced her to it, primarily as a way to send money to younger relatives.

So when she learned that Venmo wanted to launch a credit card, she knew she wanted to go all-out to win the deal.

Synchrony, which split off from GE Capital in 2014, powers branded credit cards for the likes of Amazon, Google, Lowe’s, Banana Republic, T.J. Maxx, and PayPal (which, by the way, owns Venmo). But Keane understood this partnership required a unique pitch. “When you’re striking partnerships, you can’t get too comfortable and just rest on your laurels,” she says. Indeed, earlier in the year, Walmart had announced that, after a 20-year partnership with Synchrony, Capital One would become its new credit card issuer.

Keane organized a task force of millennial employees who worked across Synchrony’s technology groups to create “vignettes,” or potential scenarios (think: a ski trip with friends splitting costs), that best describe how the Venmo credit card experience should feel.

The credit card would have an in-app experience, a personalized touch, and a mechanism for rewards. Synchrony won the deal and, in 2020, will roll out the new offering to Venmo’s 40 million customers.

Keane’s fast-twitch sales muscles are part of what has powered Synchrony’s stellar results. Its stock delivered a total return to shareholders of 62% year to date, and it is outpacing rivals handily when it comes to both return on capital and return on equity. 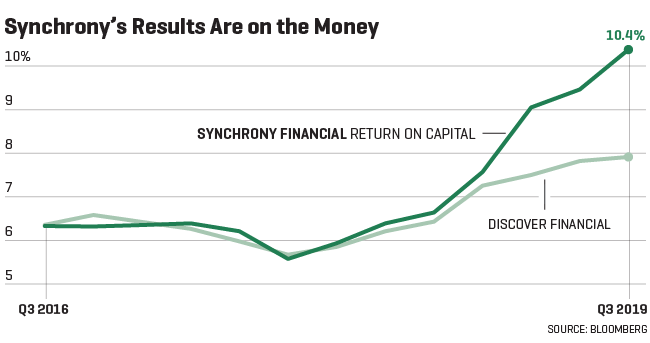 Keane admits she isn’t sure Synchrony would have won the Venmo deal prior to 2014. That’s when Synchrony started making huge tech investments, including in cloud data centers, machine learning, predictive analytics, and robotics process automation to help drive speed and personalization. Synchrony has hired more than 170 data scientists, and its tech teams are among the fastest-growing groups within the firm, now numbering approximately 1,000 people. “The big investment we’ve made in technology has definitely paid off,” says Keane.

In the end, she notes, you can’t be complacent in any partnership. The word she likes to use for such long-term unions? They are, she says, “marriages.”