Elizabeth Gaines knows how to get off to a fast start. Since she took over as CEO of Perth-based Fortescue Metals Group in February 2018, the stock of the world’s fourth-largest iron ore miner has delivered a total return of 90% vs. 5% for Australia’s S&P/ASX 200 benchmark index, pushing the company’s market value to around $20 billion. And for Fortescue’s financial year ending in June, Gaines’s first full reporting period in charge, revenues jumped 45% (to a record $9.97 billion) and profits rocketed up 263% (to a record $3.2 billion).

Some of that spectacular performance can be attributed simply to market forces. Supply disruptions in the global iron ore market this year—including a dam disaster at a mine run by Brazilian giant Vale— combined with stronger than expected demand from China caused prices to spike from $75 per ton in January to as high as $122 in July, before plunging back closer to $80. To reduce costs, Chinese steel mills shifted to Fortescue’s products—which are of a lower grade, and thus cheaper, than the ore sold by Vale and Anglo-Australian rivals Rio Tinto and BHP.

But Gaines is quick to tick off reasons for Fortescue’s success that go beyond the price spike. “Stretch targets,” she says over the phone, with a soft laugh, “have always been a hallmark at Fortescue.”

She points out that the miner doubled the number of products it offers in 2019, from three to six, including its first-ever ore with a grade of higher than 60% purity. Greater efficiency boosted Fortescue’s average revenue per ton of ore produced by 48%. And some of those cost savings came from Fortescue’s fast-growing use of autonomous trucks to haul ore. The autonomous fleet travels more than 750,000 miles every month inside its mines, or more than twice the distance around Australia per day.

Though Gaines, 56, grew up in commodities-heavy Western Australia, she didn’t start her career in mining. She worked in private equity and served as the CEO of travel company Helloworld before joining the board of Fortescue in 2013. Gaines became CFO in 2017 and, later that same year, Fortescue’s billionaire founder, Andrew “Twiggy” Forrest, announced she would soon become the miner’s third chief executive. Her deputy CEO is also a woman, as are 26% of executives at the company overall and half of the board. Women, says Gaines, “are key to helping us reach our stretch targets. 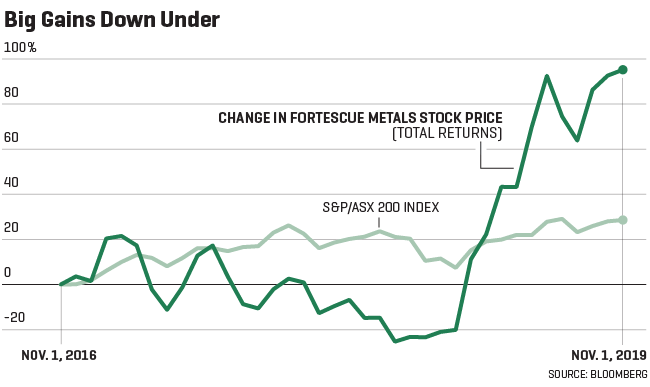 Since Gaines joined Fortescue, the company has radically reduced its net debt—from $10.5 billion in 2013 to just $500 million last quarter. With the balance sheet under control, Gaines is in investment mode: plowing nearly $4 billion into a pair of new mine projects—one set to begin production next year, the other in 2022—that will allow Fortescue to sell more high-quality ore. That should keep Fortescue out front, even if prices retreat.