That may seem like an odd choice, given that he’s spent his career reimagining fast food for the masses, first at Procter & Gamble—where he helped develop niche Pringles flavors—and then at Yum Brands, where he worked on Pizza Hut and helped turn around Taco Bell. And now, Niccol runs Chipotle Mexican Grill, the once beleaguered chain that has, under his watch, again become a Wall Street darling.

But growing up in a “big Italian family,” spaghetti was a beloved staple—and a classic example of how good getting the basics right can be. “When it’s done well, it’s one of those dishes you talk about for a while,” he says. 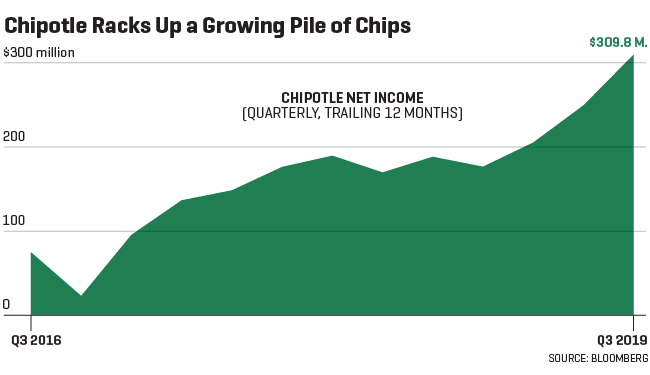 It’s an appreciation that has served Niccol well since joining Chipotle in March 2018. He was tasked with turning the chain around after a spate of E. coli food scares beginning in 2015. A raft of executives departed, and the stock sank some 66%.

The company had become defensive, Niccol says, rather than embracing the innovative approach to ethical eating that made it such a sensation in the first place. Oh, and customers told him the food had gotten, well, bland.

“We had to get better at making the food,” he says. Niccol began by shoring up the essentials, for instance, making sure employees were retrained in making guacamole the “culinary” way, tasting it to make sure the flavors were in balance. He then debuted some classic fast-food strategies Chipotle had long eschewed: launching ad campaigns and introducing new menu items, a rewards program, drive-thru windows, and additional assembly lines to meet delivery-only orders.

The changes have driven revenue growth of 13.1% to $5.4 billion over the past 12 months, and the chain quickly became one of 2019’s best-performing stocks, hitting a record high in July and again in October. Meanwhile, the company has delivered an impressive run of 12 consecutive quarters of revenue growth through the third quarter of 2019. In 2019, it expects to open 140 to 155 stores and, in 2020, up to 165— from just over 2,500 stores at the end of the third quarter of 2019. But even as the chain grows, says Niccol, “we can never go backwards on the things people already love about the business: the guacamole, the chips, the chicken, or—as my 8-year-old daughter would point out to me—the white rice,” he says.

And his job isn’t done. He admits he’s not quite happy with the queso— yet.