“Cool” is how one Belgian shopper sums up the vibe. Yet just a few years ago, “cool” and “Puma” were seldom uttered in the same sentence. In 2013, Puma was losing everywhere. Sales were tanking. Market share was slipping. More ominously, the brand had little street or performance cred. Ballers wanted Nike. Skateboarders wanted Vans. Nobody wanted Pumas. 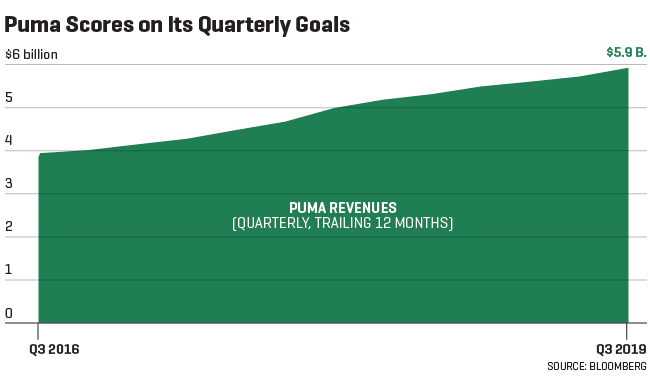 To regain the allegiance of athletes, Puma turned to one: Bjørn Gulden.

In his youth, Gulden was a footballer. He played soccer professionally in the 1980s in his native Norway and for two seasons in Germany for FC Nuremberg, just down the road from Puma headquarters. A midfielder, he wasn’t much of a goal-scorer. His talent lay in a kind of supercharged field vision that’s stuck with him all these years. After his career ended, he went on to earn his MBA and later to manage divisions at Adidas and Helly Hansen and to run Danish jeweler Pandora. When he took the helm at Puma in July 2013, Gulden zeroed in on the “Forever faster” brand mantra, which came to embody the entire business strategy. “Puma is about fast products, fast athletes, fast designs, and fast decision-making,” Gulden told the markets when introducing his turnaround strategy.

It’s working. Six years on, Puma is on pace to nearly double sales to an estimated $6 billion in 2019 and more than double operating margins. Those collaborations with Rihanna and Jay-Z as well as hits like the Clyde shoe (originally made famous by the Knicks’ Walt “Clyde” Frazier in the 1970s) have propelled Puma to nearly 20% year-overyear sales growth in its left-for-dead U.S. business. The brand is as cool in Brooklyn as it is in Beijing. Says Berenberg analyst Graham Renwick: “At the rate they’re growing, they should be closing in on No. 3 globally” behind Nike and Adidas. Over three years, the stock has returned 232%.