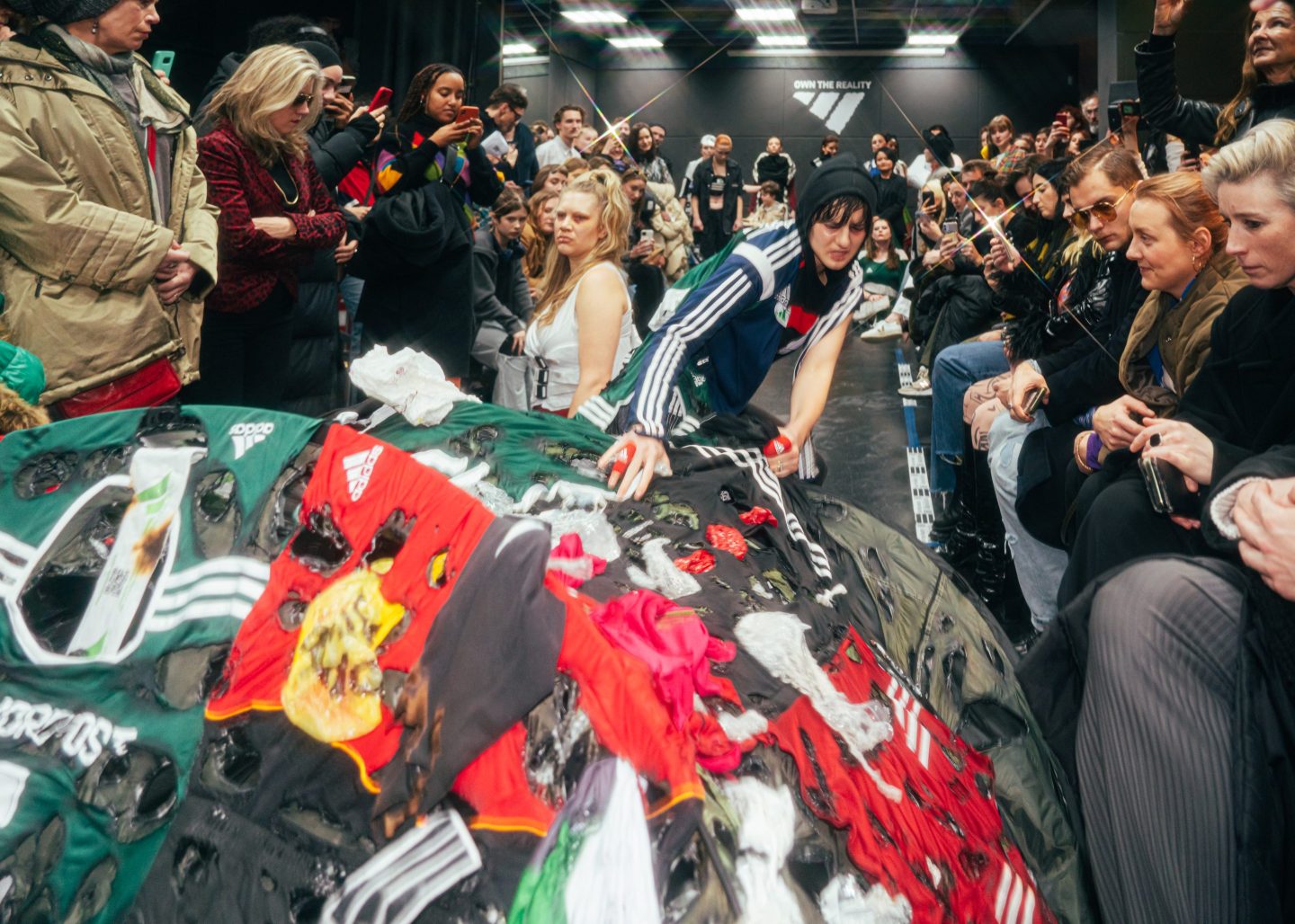 Viewers were "moved" by the show at Berlin Fashion Week on Monday.
JELLY LUISE

Global sportswear brand Adidas shocked the fashion world this week by seemingly appointing a former factory worker as co-CEO, as well as revealing that it was launching a “pre-worn” collection at Berlin Fashion Week.

However the “utopian announcement” was later revealed to be the work of fair pay campaigners, piling pressure on the athleisure wear giant to make promises about laborers’ pay and union rights.

The first of the releases — sent to fashion influencers from a fake Adidas email — claimed former Cambodian factory worker and union leader, Van Ya Nak Phoan, had been appointed co-CEO of the brand to “assure consumers that Adidas products are the most ethical brand they can buy”.

A spokeswoman for Adidas said: “This was a hoax email, a fake press release, and a fake website. This was not issued by Adidas.”

At 4 p.m. on Monday droves of fashionistas and influencers then descended on an invite-only show for the supposed REALITYWEAR brand. They were greeted by Van Ya Nak Phoan, who shook everyone’s hands and thanked them for being there. Visitors then witnessed models stumbling and crawling down the runway — even sometimes clinging onto onlookers to get by — in shredded garments.

Adidas declined to comment on the event. It was later revealed to be the work of campaigners The Yes Men, who worked alongside the Clean Clothes Campaign to set up the heist.

Mike Bonanno, who founded the group more than 20 years ago alongside friend Andy Bichlbaum, told Fortune the event provoked an emotional reaction from viewers. “The people [who] came didn’t know it wasn’t Adidas,” he explained. “It was amazing to see people moved by it and taking it seriously, they really felt excited that Adidas was doing this new thing and was making a promise.

“Some of them were really ecstatic — they were almost brought to tears. The show was surprisingly moving, the models were in these really well-designed but decrepit and soiled clothes. The people who were there were there to see Adidas, they want to buy Adidas stuff, they may have come wearing it. And they’d rather have clothes that were made without workers suffering.”

Adidas has vehemently denied the allegations regarding working conditions in its supply chain. “For more than 25 years, Adidas has taken a variety of measures to ensure fair and safe working conditions for workers in its supply chain,” the company said in a statement to Fortune. “The Adidas Workplace Standards commit our suppliers to progressively increase worker compensation and living standards through continuous development of compensation systems, benefits, social programs and other services. The disposable income of workers in our supplier factories is generally significantly higher than the respective statutory minimum wage.

Adidas says that a team of some 50 experts works in supplier countries to ensure workplace standards are applied and met. In 2021, Adidas conducted more than 1,200 factory audits of suppliers, it says, adding that when standards are breached, it has a sanction mechanism that can lead to the termination of business relationships.

Van Ya Nak Phoan is actually journalist Len Leng, who began her career by covering a factory fire in Cambodia. “I got goosebumps,” she said of the hoax show. “I grew up in rural Cambodia with little access to education and healthcare so with my work I really wanted to give the voice to the voiceless.

“What we want to achieve is for Adidas to start a conversation and stop ignoring these issues. It’s about time they start talking and engaging with campaigners and NGOs.”

Ilana Winterstein of the Clean Clothes Campaign has urged the fashion behemoth to sign its legally-binding Pay Your Workers pledge. She said if Adidas made the move, then others in the market would follow its lead.

“It’s hard to top what happened yesterday but we’ve been campaigning to on Adidas to sign the Pay Your Workers agreement for quite some time — from global weeks of action to being in dialogue with them. They haven’t yet come to the negotiating table to talk with the unions who are behind the agreement and that is the key.

“This is a systemic issue across the industry. It comes down to what happens next and how Adidas responds to this hoax,” she added.

The headlines mark a bumpy start for Bjørn Gulden, who has only served as CEO of Adidas for a matter of weeks. Before his arrival, Adidas had been embroiled in controversy over its relationship with Kanye West, now known as Ye, which it ended late last year following his anti-Semitic comments. Adidas was one of the few brands that held onto its partnership with West following his online outbursts against Jews. As those went viral and garnered support from extreme groups, though, the company terminated the relationship, ending production on all Yeezy branded products, saying “Adidas will stop the Adidas Yeezy business with immediate effect.”

Adidas has been accused of labor issues in Cambodia since 2015. At the time, pressure group Human Rights Watch claimed to have found evidence of discrimination and anti-union practices.