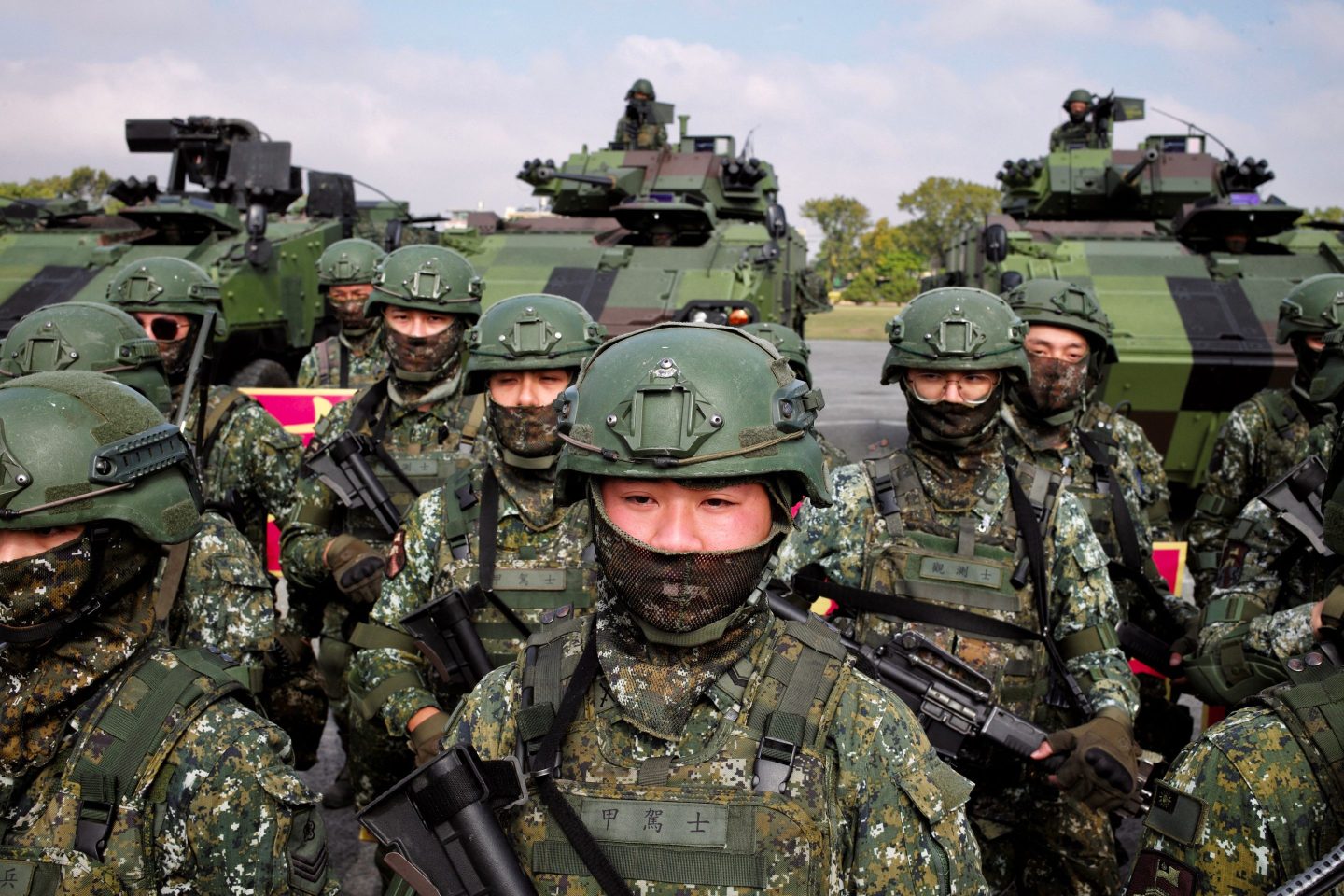 If China invaded, Taiwanese soldiers could make good use of a system like Starlink, which was provided to Ukraine by Elon Musk's SpaceX.
SAM YEH—AFP via Getty Images

For years before Russia invaded Ukraine, there was another scenario that worried foreign policy wonks even more: China and Taiwan. Despite having never governed it, China considers Taiwan its territory and has vowed to “reunify” it with the Chinese mainland—by force if necessary. White House National Security Adviser Jake Sullivan said today that preventing war with China over Taiwan will be “hard work” and require “coordination with allies.”

China might be having second thoughts about invading Taiwan after watching Russia’s disastrous war in Ukraine, though, and a big reason for Ukraine’s success has been the stable internet connections provided by the Starlink satellite system from Elon Musk’s SpaceX, which has allowed Kyiv to say in contact with troops despite Russian attacks on communications infrastructure. Now Taiwan, having watched the conflict in Ukraine, plans to build its own version of Starlink, the Financial Times reported, citing three people familiar with the situation.

Taiwan’s space agency, TASA, is in early talks with domestic and international investors to raise money for the project. “We are going to spin our low-Earth orbit satellite communications project off into a company,” a senior TASA official told the British paper.

In Ukraine, Russian forces disrupted internet services upon invading in February of last year. But later that month, Musk activated Starlink across Ukraine, after a request from Mykhaylo Fedorov, the nation’s deputy prime minister.

Ukraine has so far received about 22,000 antennas, with 10,000 more slated to arrive in the months ahead, Fedorov told Bloomberg last month.

The antennas, which can be powered by generators if the electricity grid is incapacitated, have helped Ukrainian forces and civilians in numerous ways. Troops have used Starlink-connected drones, for instance, to drop anti-tank munitions on Russian positions.

Not that Starlink was designed with such activities in mind. The main idea was to provide satellite internet connectivity to places lacking telecommunications infrastructure. But a country under invasion is often just that, thanks to attacks on infrastructure.

In October, Musk griped that SpaceX—recently valued at $137 billion—could not “indefinitely” provide the Starlink service to Ukraine, but he quickly backed down after backlash. That followed him provoking an uproar by proposing that Russia be allowed to keep the Crimea Peninsula, which it seized in 2014.

“The hell with it,” he tweeted. “Even though Starlink is still losing money & other companies are getting billions of taxpayer $, we’ll just keep funding Ukraine govt for free.” In response to a comment that “no good deed goes unpunished,” he added, “Even so, we should still do good deeds.”

But such “good deeds” are not guaranteed, of course. Musk’s Tesla also has major operations in China, where intense competition from local industry leader BYD (backed by Warren Buffett) prompted it to slash prices on certain models this week. Taiwan, by building its own Starlink-like system, aims to have more resilience than if it relied on one company.

“Our primary concern…is facilitating the societal resilience, to make sure for example that journalists can send videos to…international viewers even during a large-scale disaster,” Audrey Tang, Taiwan’s digital affairs minister, told the FT.

“The vision [is] not to tie ourselves to any particular satellite provider,” she added. “We want to work with as many of them concurrently—that’s resilience.”