Southwest again cancels most of its flights on Tuesday, marking it as an outlier in the airline industry 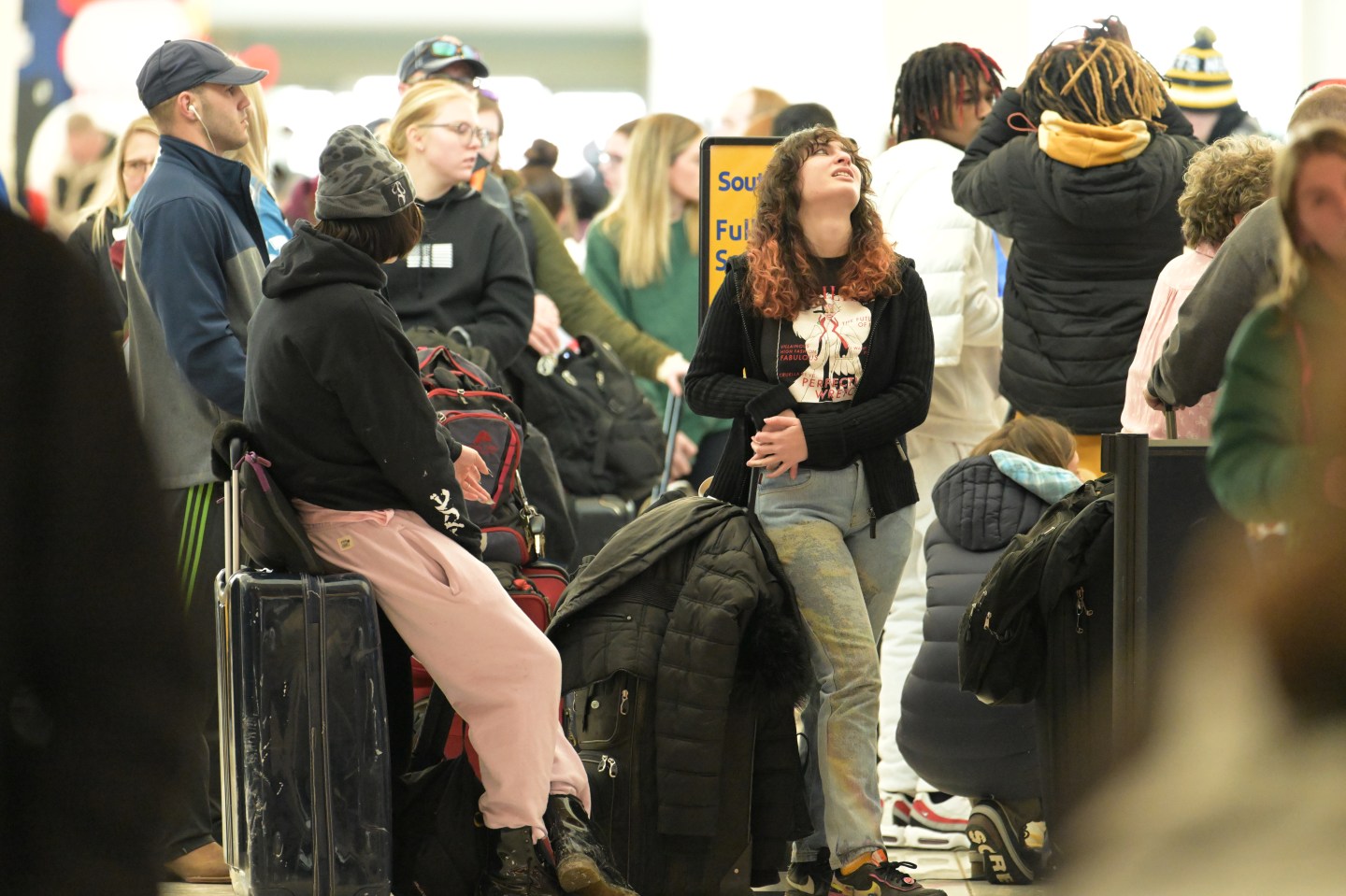 Ella Silverstein looks up during her waiting in the line to book a flight in front of the Southwest Airlines ticket counter at Denver International Airport in on Thursday, December 22, 2022—it was canceled.
Hyoung Chang/The Denver Post

Southwest Airlines Co. canceled almost two-thirds of its flights Tuesday, still hobbled by a massive winter storm that most major rivals were able to recover from with greater ease.

The chaos will prove costly to the airline, with Citi analysts estimating it could shave 3% to 5% from Southwest’s fourth-quarter earnings. There’s a reputational cost as well, with angry travelers stranded over the holiday season and the airline having to apologize, much as it did in a similar collapse after storms in October 2021.

The performance left Southwest as an outlier in the industry, with United Airlines Holdings Inc., Delta Air Lines Inc., American Airlines Group Inc. and JetBlue Airways Corp. all reporting no more than 2% of their flights canceled on Tuesday. The US Department of Transportation said it was concerned by Southwest’s “unacceptable” rate of cancellations and will investigate reports of a lack of prompt customer service.

“We expect Southwest to call out the impact as it was worse than the industry and likely hurt earnings more than a ‘normal’ storm,” Cowen Inc. analysts led by Helane Becker said in a research note Tuesday. “Southwest had the worst performance in the group.” Rivals had manageable cancellations and “appear to have recovered” in time to get travelers home, the note said.

Dallas-based Southwest’s shares declined as much as 6.8% Tuesday, while United, American and Delta fell less than 2%.

Southwest offered its “heartfelt apologies” Tuesday afternoon and said the widespread disruptions were “unacceptable.” The company plans to operate about one-third of its schedule for the next several days to allow crews to get into the right positions.

There’s little relief in sight, with 62% of Southwest’s schedule canceled for Wednesday and at least 20% for Thursday — making it difficult to rebook stranded travelers.

The Department of Transportation said it would examine whether the cancellations were controllable and if the company is complying with its customer service plan.

US President Joe Biden weighed in with a tweet as well on Tuesday, noting the thousands of airline cancellations over the holidays without singling out Southwest by name. “Our administration is working to ensure airlines are held accountable,” Biden wrote, referring passengers to a DOT dashboard to see whether they’re entitled to compensation.

Southwest said that although the airline was fully staffed for the holiday, 23 out of its 25 top airports were affected by the storm that pummeled much of the US Northeast and left record snow totals in the Midwest. The airline is the biggest carrier serving Buffalo, New York, the hardest-hit urban area in the storm’s path.

“With consecutive days of extreme winter weather across our network behind us, continuing challenges are impacting our customers and employees in a significant way that is unacceptable,” the airline said in a statement. The storm “forced daily changes to our flight schedule at a volume and magnitude that still has the tools our teams use to recover the airline operating at capacity.”

Online, travelers vented about the turmoil, whose arrival in the midst of a busy holiday punctuated a dismal year for the US airline industry. With Southwest’s stock down 16% this year through Dec. 23, the stock is headed toward a third straight annual decline, the worst such run since a similar stretch that ended in 2008.

Unlike competitors that use a so-called hub-and-spoke system to funnel passengers to large airports, Southwest is focused on point-to-point service, flying the same aircraft — Boeing Co. 737s — on trips that may hopscotch around the US.

While that accounted for part of Monday’s upheaval, FlightAware data showed struggles in cities where Southwest has major operations, including Dallas, Phoenix and Las Vegas.

Ryan Green, Southwest’s chief commercial officer, told the Wall Street Journal that the airline is taking steps like covering customers’ reasonable travel costs — including hotels, rental cars and tickets on other airlines, and will be communicating the process for customers to have expenses reimbursed.

People whose flights have been canceled are entitled to refunds if they opt not to travel, Green was quoted as saying.

The tumult evoked memories of tie-ups at Southwest and other airlines. Southwest blamed a worker shortage, an air-traffic control interruption and bad weather for a four-day disruption that erased 3,100 flights in late 2021. In 2007, JetBlue cut 1,102 flights over six days — almost a third of its schedule — after a Valentine’s Day ice storm.