Southwest Airlines will fly one-third of its scheduled flights this week, and customers are furious 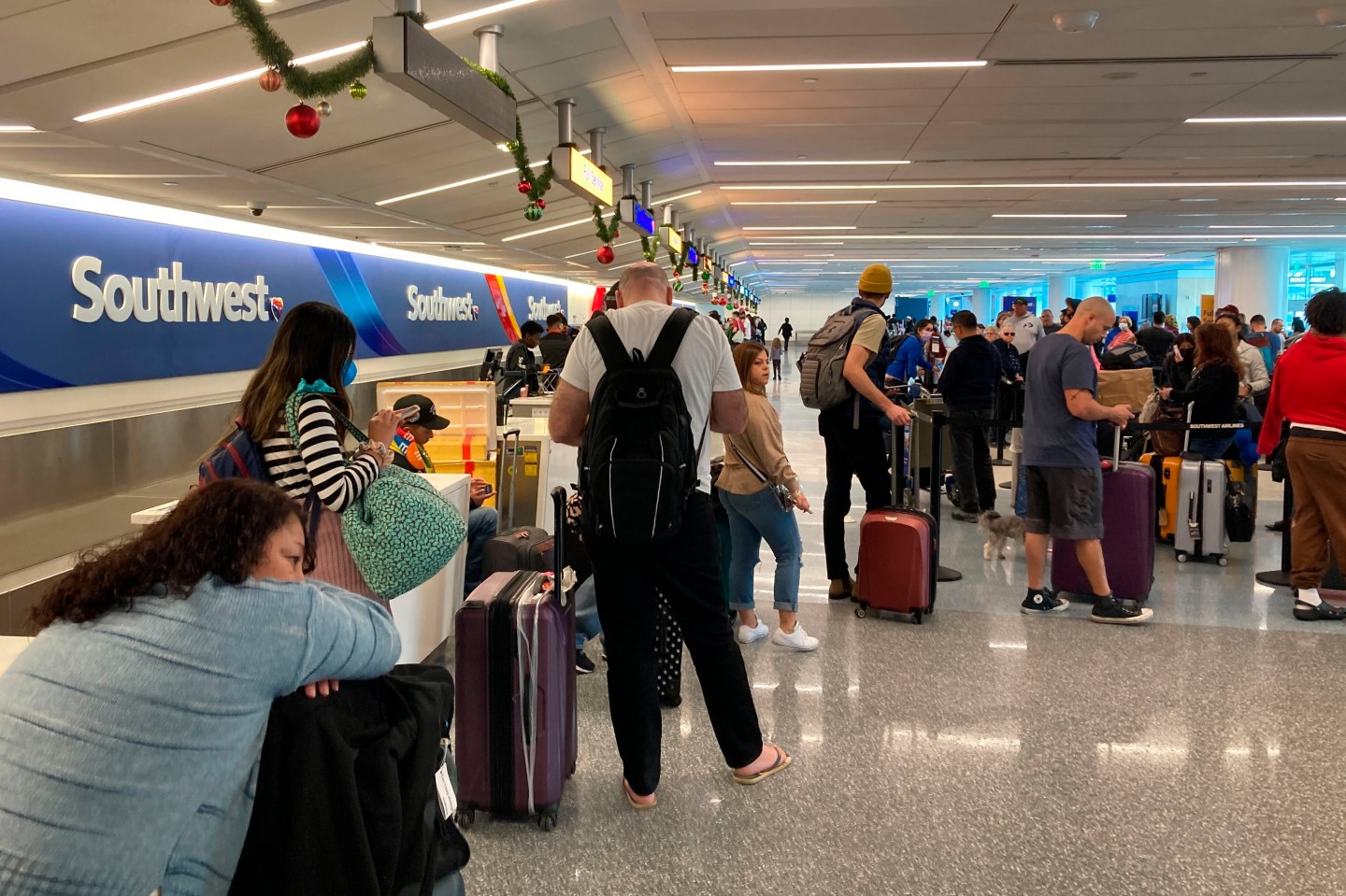 While flight cancelations and delays due to winter storms affected all the major American airlines over Christmas weekend, the misery continued for one group of passengers in particular on Monday and Tuesday. More than 3,000 flights across the U.S. had been canceled Tuesday afternoon and most—some 85 percent—of those scrubbed flights were those of Southwest Airlines.

The low-cost airline had posted 2,613 cancellations as of 5pm, nearly two-thirds of its carrier flights, according to FlightAware, a website that tracks flights, delays, and cancelations. This was a dramatically worse showing than its rivals American Airlines, United, Delta and JetBlue, which had cancellation rates of 2 percent or less on Tuesday. Spirit Airlines had canceled 11 percent of its flights.

Southwest apologized Tuesday and provided a travel disruption website where customers could rebook their flight or request a refund. In a statement on its website, it said the airline had been fully staffed and prepared for the holiday weekend when severe weather swept across the continent. This impacted 23 of the 25 travel markets where it was the largest carrier. These operational conditions forced “daily changes to our flight schedule at a volume and magnitude that still has the tools our teams use to recover the airline operating at capacity,” Southwest said.

The airline said it would operate a reduced schedule, planning to fly just a third of its schedule for the next several days. “With consecutive days of extreme winter weather across our network behind us, continuing challenges are impacting our Customers and Employees in a significant way that is unacceptable,” Southwest said in the statement.

Meanwhile, Southwest employees and union groups criticized the airline for refusing to update its software and leaving pilots and attendants stranded during the chaos, magnifying the challenges already posed by the storm, as Fortune has reported.

The Department of Transportation said in an email from a spokesperson Tuesday that the rate of cancellations and delays on Southwest Airlines was unacceptable and pointed out that it was dramatically higher than other U.S. carriers. Pete Buttigieg, the U.S. Secretary of Transportation, spoke with Bob Jordan, CEO of Southwest Airlines, Tuesday afternoon, as well as union leaders that represent Southwest flight attendants and pilots, the spokesperson said. Secretary Buttigieg told Jordan that he expects Southwest to provide meal vouchers, refunds, and hotel accommodations for those that experienced significant delays or cancelations due to Southwest’s decisions and actions. Like all airlines, Southwest must also provide a cash refund for passengers whose flights were canceled and decided not to travel, the DOT spokesperson said.

Secretary Buttigieg also expects Southwest to do right by their pilots and flight attendants, as well as their other workers, the spokesperson said, adding: “The Department will take action to hold Southwest accountable if it fails to fulfill its obligations and we will stay engaged with Southwest Airlines to make sure the airline does not allow a situation like this to happen again.”

Consumers took to Twitter to vent about the Southwest cancelations, the long lines to customer service, or their lost baggage. Many complained that Southwest wouldn’t reply to their calls. Mike Bolen, who identifies himself on Twitter as a real estate investor, posted a video of dozens of airline customers waiting in baggage claim:

Another video from Monica Benavidez, who blogs about home decor, showed hundreds of airline customers stranded Monday afternoon at William P. Hobby Airport in Houston as they waited for their flights. Benavidez said in a tweet that it took her more than 26 hours to make it to Corpus Christi, Texas from Las Vegas, after her flight home was canceled. “Do not fly @SouthwestAir anytime within the next 1-2 weeks,” Benavidez tweeted. “The stuff they’re doing to customers is beyond wrong- I saw elderly passengers sitting alone in wheelchairs for HOURS at LAS yesterday after being told we would ‘board soon.’”

Jared Seehafer, who identifies himself as the CEO of a healthcare tech company, tweeted that the co-founder of Southwest Air, Herb Kelleher, must be spinning in his grave. Seehafer linked to a now-deleted post on Reddit that detailed an employee’s claim that Southwest had cancelled “5 days of flights because the crew scheduling software crashed.”

This post has been updated with a statement from the Department of Transportation.