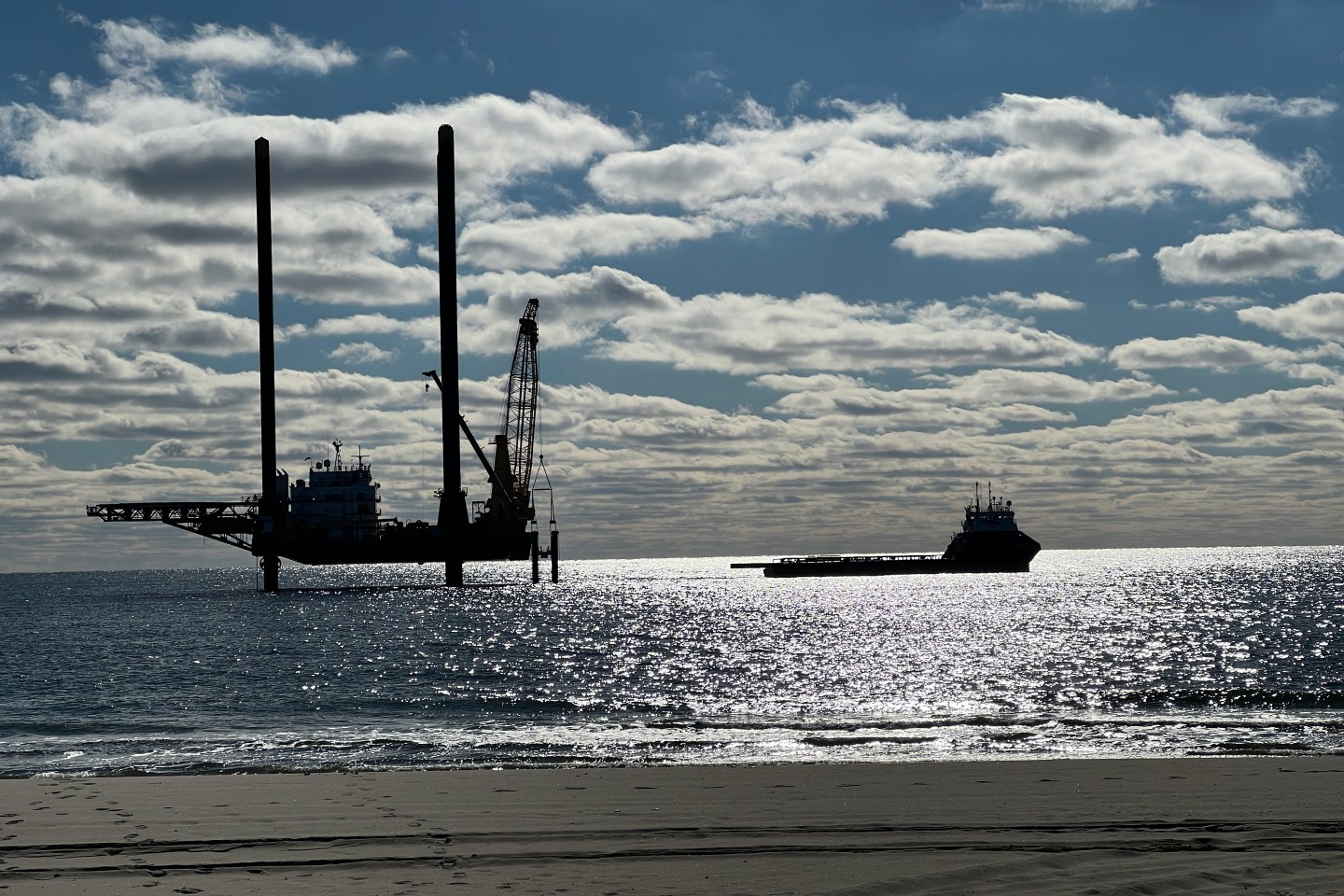 Beneath an East Hampton beach a few miles from Long Island’s fabled Montauk Point, the future of U.S. wind energy is taking shape. From a barge parked about one-third of a mile offshore, workers late last year began drilling horizontally beneath the seabed to make room for a new power transmission cable that will connect on land to a power company substation. If all goes as planned, by next year it will carry power generated by the 12-turbine South Fork Wind farm 35 miles east of Montauk Point into Long Island’s power grid. It will be New York’s first offshore wind farm.

That an offshore project is actually under construction in the U.S. is remarkable, given the permitting and litigation challenges that tend to drag plans out. But the South Fork Wind project—backed by Danish renewable energy giant Orsted and the utility Eversource Energy, and slated to begin operations in late 2023—is also notable for being built almost entirely with union labor, following the terms of a first-of-its-kind National Offshore Wind Agreement signed in May 2022 by Orsted and North America’s Building Trades Unions (NABTU).

That project labor agreement, along with passage this year of the federal Inflation Reduction Act (IRA), has buoyed hopes that a long-sought “just transition” for workers impacted by the shift to clean energy may finally be taking shape. For years, labor unions and allied environmental organizations have been arguing that high-quality jobs can and should power the shift away from fossil fuels—and that communities that have been economically reliant on those fuels shouldn’t be left behind. But the reality is that while wind- and solar-related jobs have grown in recent years, they often don’t pay as well as, say, a coal-fired power plant job. That has implications for America’s already-shrinking middle class.

The IRA isn’t perfect, but it’s a historic step toward a just transition, says Jason Walsh, executive director of the BlueGreen Alliance, a coalition of labor and environmental groups. The legislation plows an unprecedented $369 billion into climate-related investments and for the first time ties federal clean energy tax credits to union-level (a.k.a. “prevailing”) wage standards. This in effect sets a wage floor that ensures workers on qualifying renewable projects are paid well. Another crucial component of the IRA Walsh points to: its requirement that registered apprentices are employed on renewable energy projects above a certain size. That may sound arcane. But in essence, it may ensure that a national network of high-quality career-oriented training programs—many run by building trades unions—is built into the future of the country’s renewable energy sectors.

Taken together, the IRA’s wage and apprenticeship provisions mean that renewable-sector jobs of the future are more likely to offer a path into the middle class. “We shouldn’t have to choose between good jobs and a clean environment—that’s always been a false choice,” Walsh says. The IRA “will create high-quality jobs; it will reduce pollution; it will create benefits for workers and communities. That’s a really big deal.”

In a few different ways, the South Fork Wind project is in tune with the Biden administration’s energy transition vision. Orsted’s approach may preview what’s to come as policies and investments made by the IRA reshape the country’s renewable energy landscape.

Orsted’s agreement with NABTU covers contractors and subcontractors, and the full onshore and offshore scope of the project—everything from transmission and substation work to offshore turbine construction work. The agreement sets forth training provisions and terms for NABTU members to build all Orsted offshore farms on the East Coast going forward. It also creates apprenticeship opportunities and sets workforce diversity targets, among other initiatives.

We shouldn’t have to choose between good jobs and a clean environment.

Orsted had practical reasons for negotiating all this with NABTU. It gives the company “steady access to a pool of skilled labor,” says Allison Ziogas, U.S. labor relations manager at Orsted, helping to ensure safety, quality, and on-time project completion. Although organized labor is generally more expensive than a nonunion workforce, she says, it ultimately makes projects “more economical.” But the company also had broader goals in mind with the agreement.

All these goals dovetail with the climate transition and workforce approach of the Biden administration, which wants to see 30 gigawatts of offshore wind energy being generated by 2030. (South Fork, one of the country’s first commercial-scale farms, will produce 132 megawatts.) The administration wants to create “union jobs in America in this clean energy economy,” U.S. Energy Secretary Jennifer Granholm said last year while visiting an Orsted facility in New London, Conn. Labor agreements should support all dimensions of the energy transition now underway, she said, drawing cheers from union workers.

The reality, however, is that most commercial wind and solar farms across the country are not constructed or operated by union workers. About 10% of solar and wind generation workers are union members, according to the 2021 U.S. Energy & Employment Report. That’s above the national private-sector unionization rate, but well below the rates seen in natural gas, coal, and nuclear power plants across the country. Solar farm development companies in many states rely on temp staffing agencies to construct facilities; much of the work, such as putting solar panels onto racks, doesn’t require highly skilled workers. And the companies, which compete to win contracts with utilities, see low labor costs as a path to profits.

Orsted’s commitment to creating high-quality union jobs is a notable development, but offshore wind farms won’t create that many jobs in the big picture of the U.S. economy, says Lara Skinner of Cornell University’s School of Industrial and Labor Relations. “The majority of [wind-related] jobs are going to be in the manufacturing supply chain,” she says, so the country needs to prioritize the development of domestic renewable supply chains. The IRA tries to spur domestic manufacturing by offering an additional tax credit for renewable projects using American-made equipment, she notes.

The South Fork Wind project points to what a domestic supply chain for the emerging industry can look like: It will feature the first-ever U.S.-made offshore wind substation. But right now, there’s a big disparity in total U.S. employment across energy sectors. Wind, solar, and hydropower power generation (including construction and manufacturing) employs about 500,000 people. Natural gas, oil, and coal? About 1.4 million people.

The wind sector’s growth has been slowed down by significant permitting challenges, which the IRA only partly addresses. Most of Orsted’s projects, for example, remain in the permitting phase. Even assuming the benefits of the IRA are maximized, it will take years before the country sees “a massive buildout of projects” inspired by the legislation, Skinner says. As more coal-fired power plants are retired this decade, that wait could leave workers contemplating what comes next in the lurch.

But state governments can play a key role in accelerating the creation of clean-energy-related jobs with solid pay and benefits, Skinner argues. “State-level labor standards are really important,” she says, noting that a lot of federal dollars flow through cities and states, and most renewable energy projects are approved at the local level.

New York, Maine, Illinois, and Connecticut have all passed laws that aim to raise the quality of clean-energy-related jobs. For example, Connecticut now requires that prevailing wages be paid to all construction and operation and maintenance workers for projects two megawatts or above.

Some states, such as Illinois, are making targeted investments in job training and economic development to aid historically disadvantaged communities, as well as communities and workers specifically impacted by the transition away from fossil fuels.

Building bridges to the future

Jim Harrison has seen what happens when communities hard-hit by the energy transition can’t reinvent themselves. A former coal plant worker, Harrison is now director of renewable energy at the Utility Workers Union of America (UWUA). Its membership, spread across 22 states and all energy sectors, has fallen during the past 10 years as coal-fired power plants have closed.

“We’ve seen the effects of a transition, and it hasn’t necessarily been a just transition,” says Harrison, who sits on the state of Michigan’s Council on Climate Solutions. When a power plant closes, for example, it leaves big economic holes.

The IRA tries to address this challenge by offering additional financial incentives to companies that site clean-energy projects in communities where a coal-fired power plant has closed since 2010. The legislation is “remarkable,” Harrison says, but it also has limitations. For example, the IRA’s prevailing wage incentives don’t extend to the operations roles, such as solar and wind technicians, that ultimately maintain clean energy infrastructure. The UWUA counts 40 wind technicians among its members, and they make about $15 per hour more than nonunion counterparts, on average—around $45 per hour.

Derek Mellema, a renewable specialist technician and UWUA member in Michigan, says a family-sustaining wage is great—but it’s the job security and high safety standards enabled by his union that he most appreciates. Mellema also works as an instructor in UWUA’s renewable energy apprenticeship program, teaching people—including workers transitioning from traditional energy sectors—how to maintain commercial-scale solar and wind facilities. The two-and-a-half-year program, he says, “helps create a pipeline of highly trained workers” who can earn while they learn.

Orsted is currently developing an apprenticeship program for the wind technicians who will take care of its wind farms after construction wraps up. That program, along with its ongoing agreement with NABTU, will ensure that work gets done the right way the first time, Ziogas says. Both the business and workers stand to benefit.

“Large economic shifts in our society haven’t always fared well for working people,” she says. “But we think that offshore wind can help usher in a just transition. The economic benefits that our projects can deliver to communities where we’re operating are just as important as the green electrons we’re delivering.”