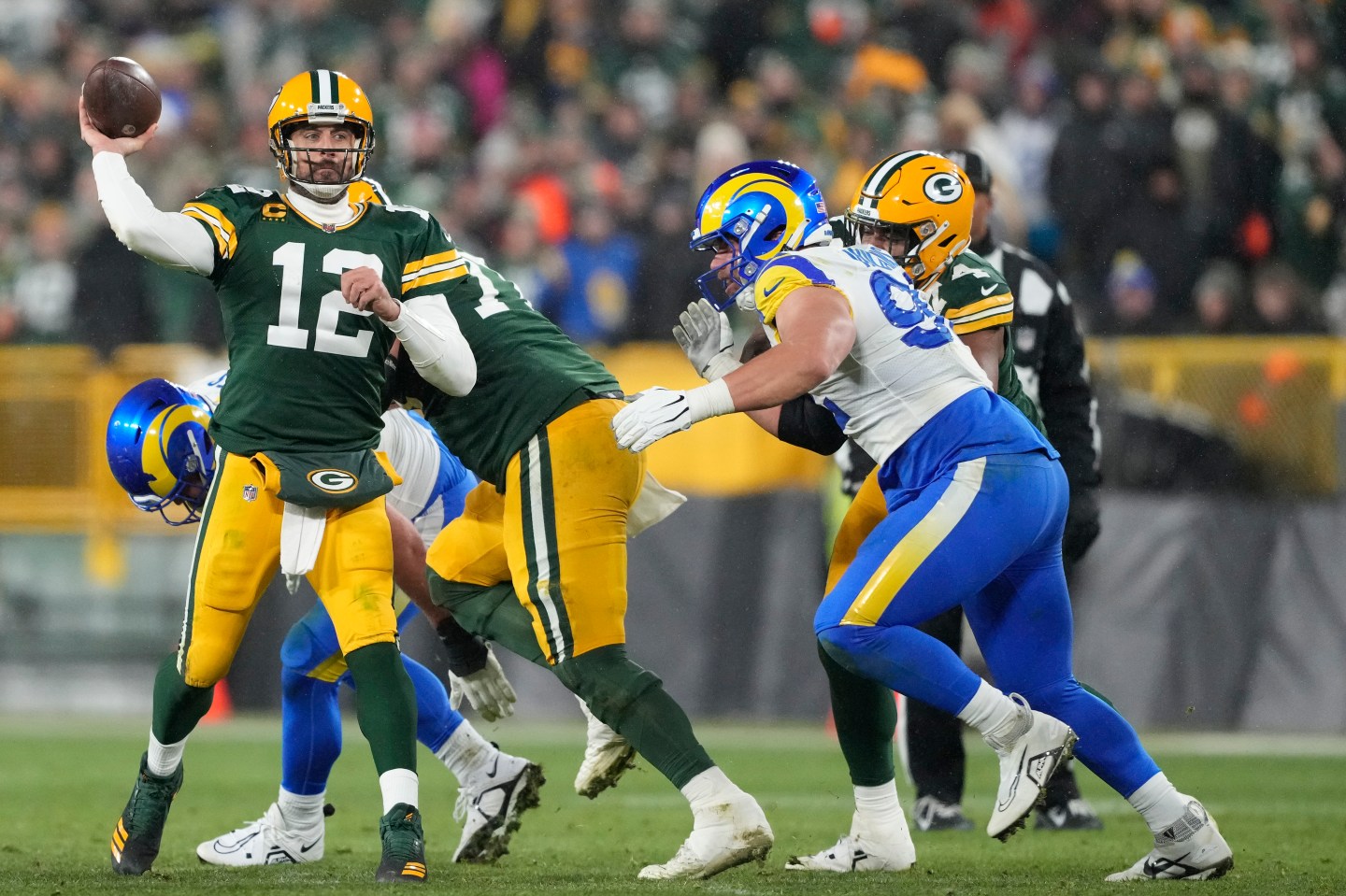 Aaron Rodgers #12 of the Green Bay Packers looks to throw a pass against the Los Angeles Rams during the second half at Lambeau Field on December 19, 2022 in Green Bay, Wisconsin.
Patrick McDermott/Getty Images

The deal is valued at more than $2 billion per year over seven years, according to a person familiar with the negotiations.

NFL Sunday Ticket gives viewers access to games not otherwise airing in their local TV markets. The service will be offered as both an add-on and as a standalone a la carte package, the league said Thursday.

It will be available on both YouTube TV — an online, cable-TV alternative service — and YouTube Primetime Channels, a way to subscribe directly to pay-TV channels like Showtime and Starz. The deal will likely provide YouTube TV, which costs $65 a month, with a significant subscriber boost, analysts say.

NFL Sunday Ticket is available through the end of this season from satellite-TV provider DirecTV, which charges about $300 for the package. YouTube’s pricing plans weren’t disclosed.

The NFL retained the commercial rights to show Sunday Ticket games to bars and restaurants and could sell that to another company, the person added.

YouTube TV, which has more than 100 channels, is the largest online pay-TV service, with about 5 million subscribers, according to Bloomberg Intelligence.

It will face a steep challenge in making Sunday Ticket profitable. DirecTV, which has about 2 million Sunday Ticket subscribers, has been losing money on the package for years due to its $1.5 billion annual-rights fee.

Sunday Ticket was the only NFL rights package still up for grabs. The league, which regularly delivers the most-watched events on television, signed new long-term distribution deals with its major broadcast partners last year worth more than $100 billion over a decade. Some networks, including NBC and CBS, also got the right to air games on Peacock, Paramount+ or other streaming platforms.

For the NFL, signing with YouTube is a “massive win,” said Daniel Cohen, executive vice president of media rights consulting at Octagon.

The league got a good price and built another relationship with a deep-pocketed tech company that could bid on future NFL broadcast rights, Cohen added. In addition to selling Thursday night NFL games to Amazon.com Inc., the league reached a deal with Apple Inc. this fall to sponsor its Super Bowl halftime show.

Executives at DirecTV, which has offered Sunday Ticket for nearly three decades, have been hoping that whoever wins the rights will cut a side deal with them. The company is losing TV customers at a rapid clip as more people cancel their pay-TV subscriptions, and has been looking for ways to stem the bleeding. Under such an agreement, DirecTV could help YouTube move Sunday Ticket subscribers to its service, while the satellite-TV service would benefit by maintaining a relationship with that customer.

DirecTV is also interested in reselling Sunday Ticket to rural customers who don’t have strong enough internet to stream the games, Thun said. Additionally, the company is hoping to keep airing games in bars and restaurants. It recently made a similar arrangement with Amazon for Thursday Night Football.

The NFL and YouTube are looking at additional ways to distribute NFL Sunday Ticket in commercial establishments such as bars and restaurants.

“It makes a heck of a lot of sense for us to be a partner on the commercial front, given that those relationships have taken years to establish and cultivate,” Thun said.