Farmers use $60 billion of pesticides each year. 2 MIT scientists have developed a new technology that could cut that number in half 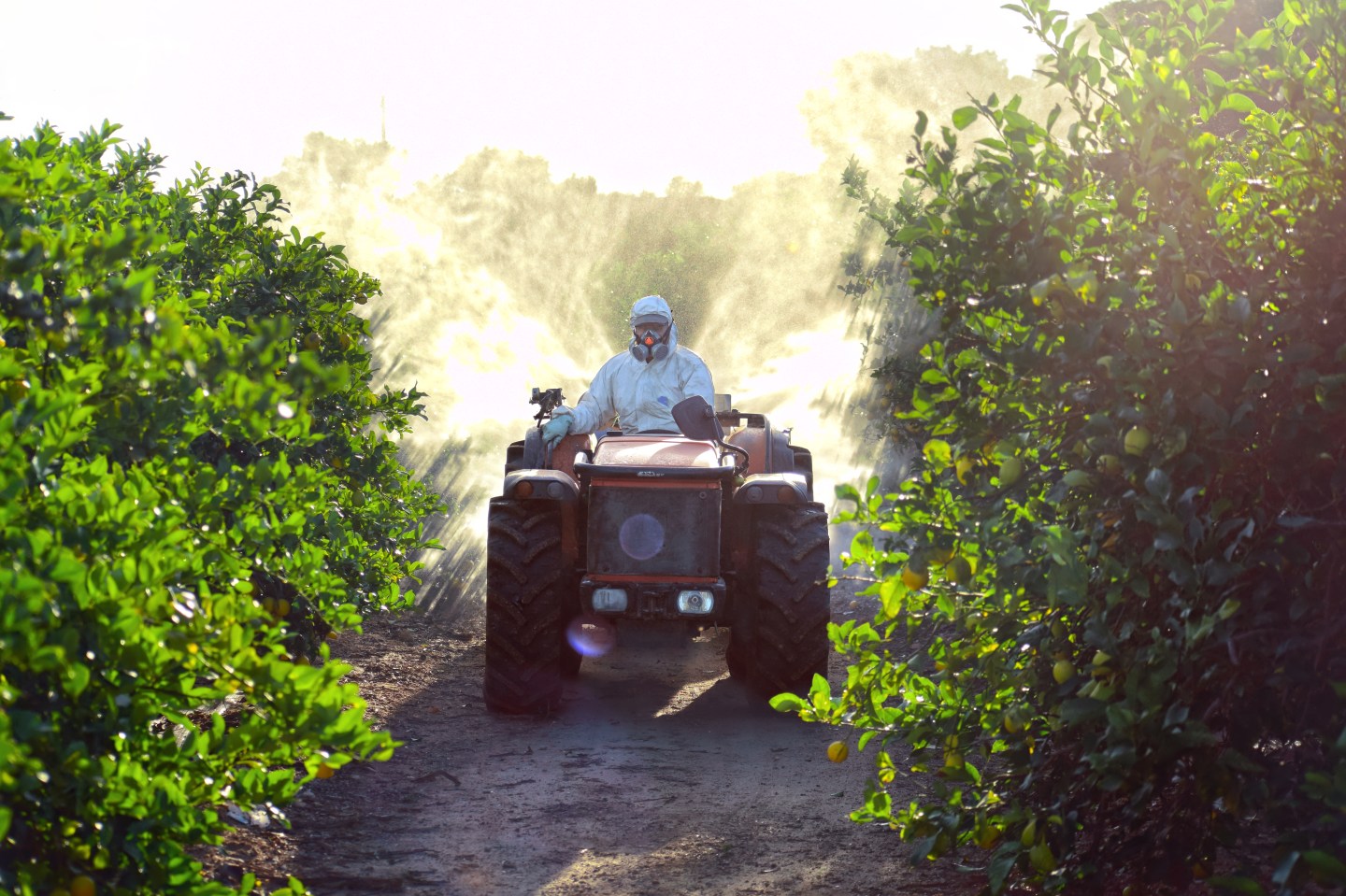 A farmer driving a tractor spraying pesticide and insecticide on a lemon plantation in Spain.
Courtesy AgZen

Kripa Varanasi had just started his first year as an assistant professor of mechanical engineering at the Massachusetts Institute of Technology in 2009 when he went to Washington, D.C., to give a talk at the U.S. Department of Agriculture. His academic focus was on the bottlenecks that occur between states of matter—where liquids and solids meet, for example—and he was studying how to make droplets stick to, or bounce off, solids in various applications. Varanasi had just come off a stint in industry, at GE, where he was inculcated in the entrepreneur’s habit of looking for problems to solve, so he asked the USDA representatives for their top gripe. They didn’t hesitate to answer: “Pesticide runoff is a big problem.”

Now, 13 years later, Varanasi and one of his since graduated Ph.D. students—Vishnu Jayaprakash—have launched AgZen, which uses additives developed in the lab to make more pesticide spray droplets stick to the plants they hit. In early lab tests and field trials, the additives replicated farmers’ prior results but with up to 50% less pesticide, cutting costs and reducing pollution from runoff and wind-carried chemicals.

“Globally, farms are spending about $60 billion a year on these pesticides, and our goal is to try to get them to cut that down while still not compromising on pest control,” says Jayaprakash, AgZen’s CEO.

The company, which officially launched in 2020, has raised $3 million in seed funding (Material Impact is an investor) and won about $600,000 in prizes such as runner-up awards at the MIT $100K and Rice Business Plan competitions.

Market research firm Fortune Business Insights says the worldwide pesticide market will grow from $59.4 billion in 2021 to $81.7 billion in 2028—but a lot of that value is wasted. A majority of pesticide sprayed doesn’t reach its target; it either blows away in the wind or falls off leaves onto the ground. According to the U.S. Geological Survey, pesticides carried long distances by wind—known as “long-range transport”—can spread pesticide chemicals a thousand kilometers or more.

“We don’t have a whole lot of control over weather conditions. And if it’s a windy day, then you’re going to get a lot of overspray,” says Daniel Snow, a research professor at the University of Nebraska—Lincoln’s Water Sciences Lab.

The pesticide industry produces additives called adjuvants, which help pesticides mix with water or stick or spread on the plants better, but their performance is uneven, Snow says, and some can be as toxic as the active ingredients in pesticides.

Besides squandering money for farmers, pesticide waste is damaging the environment and human health. According to a 2020 study published in BMC Public Health, about 385 million cases of unintentional, acute pesticide poisoning (UAPP), including around 11,000 fatalities, occur globally every year, concentrated in the developing world. The UN, for its part, points to research showing that pesticides are responsible for 200,000 acute poisoning deaths globally each year.

“This stuff is ending up everywhere and we are all ingesting this, and it doesn’t have to be that way. That’s the crazy thing about this; with some small changes, you can have a big impact,” says Varanasi, AgZen’s chairman.

Of course, farmers don’t spray pesticides for fun. A 2021 study found that if farmers didn’t use pesticides, they would lose 78% of fruit production, 54% of vegetable production, and 32% of cereal production. The challenge for Varanasi and Jayaprakash, then, was to offer the same effects with less spraying.

The problem is that many plants—especially waxy ones like cabbage and rice—are hydrophobic, meaning they naturally repel water. In the early investigations, Varanasi and his colleagues discovered that if you sprayed two liquids at a plant—one positively charged, the other negative—droplets would almost instantly form a complex similar to a salt that pins the droplet to the leaf instead of pancaking and bouncing up again. Even better, the droplets would then capture and hold any other droplets that touched them.

As they were testing the two-liquid solution, they stumbled upon a second innovation. Jayaprakash, whose family runs a 10-acre farm near Chennai, India that grows mangoes, rice, and other vegetables and fruits, thought, “You know, oils don’t bounce on very water-repellent things. Can we figure out a way to use a plant-based oil to achieve the same thing?”

It turned out they could. By including a small amount (about 0.1% of total volume) of soybean, cottonseed, grapeseed, or canola oil (less refined than cooking oils) and using a spray nozzle designed for the task, they cloaked the droplets with plant-based oil that would make the droplets stick much like using charged liquids did.

Both of these innovations were aimed at one goal—to make more pesticide spray adhere to plant surfaces quickly—and in lab tests they found they could achieve similar coverage with a third of the spray time.

There was an added benefit: Most farmers sprayed mist-like droplets because they were less likely to bounce off crops, but these droplets were more likely to be carried by the wind. Because AgZen’s oil-covered, charged droplets were stickier, farmers could, in theory, spray bigger drops that were less vulnerable to a passing breeze.

AgZen has been testing its compounds at several locations, including a Prosecco vineyard near Venice, Italy, a large vineyard in California, and Ward’s Berry Farm in Sharon, Mass. The most agronomically rigorous field trial, however, was conducted at the University of Massachusetts at Amherst’s vegetable extension program.

There, the program team, led by director Susan Scheufele, did a series of A/B tests comparing the performance of regular and AgZen-treated pesticides under various conditions—different tractor speeds, pesticide concentration, and droplet size.

The UMass group sprayed rows of acorn squash with a pesticide meant to stop powdery mildew, and assessed the results.

With a regular speed and concentration, the spread of the disease with the AgZen additive was about 33% less than with a regular treatment. At a high tractor speed (which saves the farmer time and used 33% less pesticide), disease spread was still about 10% lower—statistically a dead heat. When they cut the amount of pesticide by 50% and included the AgZen additive, the disease spread was also comparable to when the regular concentration of pesticide was used. And perhaps most interesting, when they used larger droplets—which are carried less by wind—spread dropped by some 50%, suggesting that the additive might help farmers increase protection and reduce drift at the same time.

It was only one study, but it provided independent verification that adding plant-derived oils or charging droplets could work. AgZen sells its additives and associated sprayer hardware; it declined to reveal current or projected revenues.

“For farmers, it takes a lot of time to go out and do these sprays. Often they need to do it once a week. And the materials are expensive. So if the product isn’t making it to the plant, that’s a waste of time and money. If he can use less and go faster, it saves both of those things,” says Scheufele.