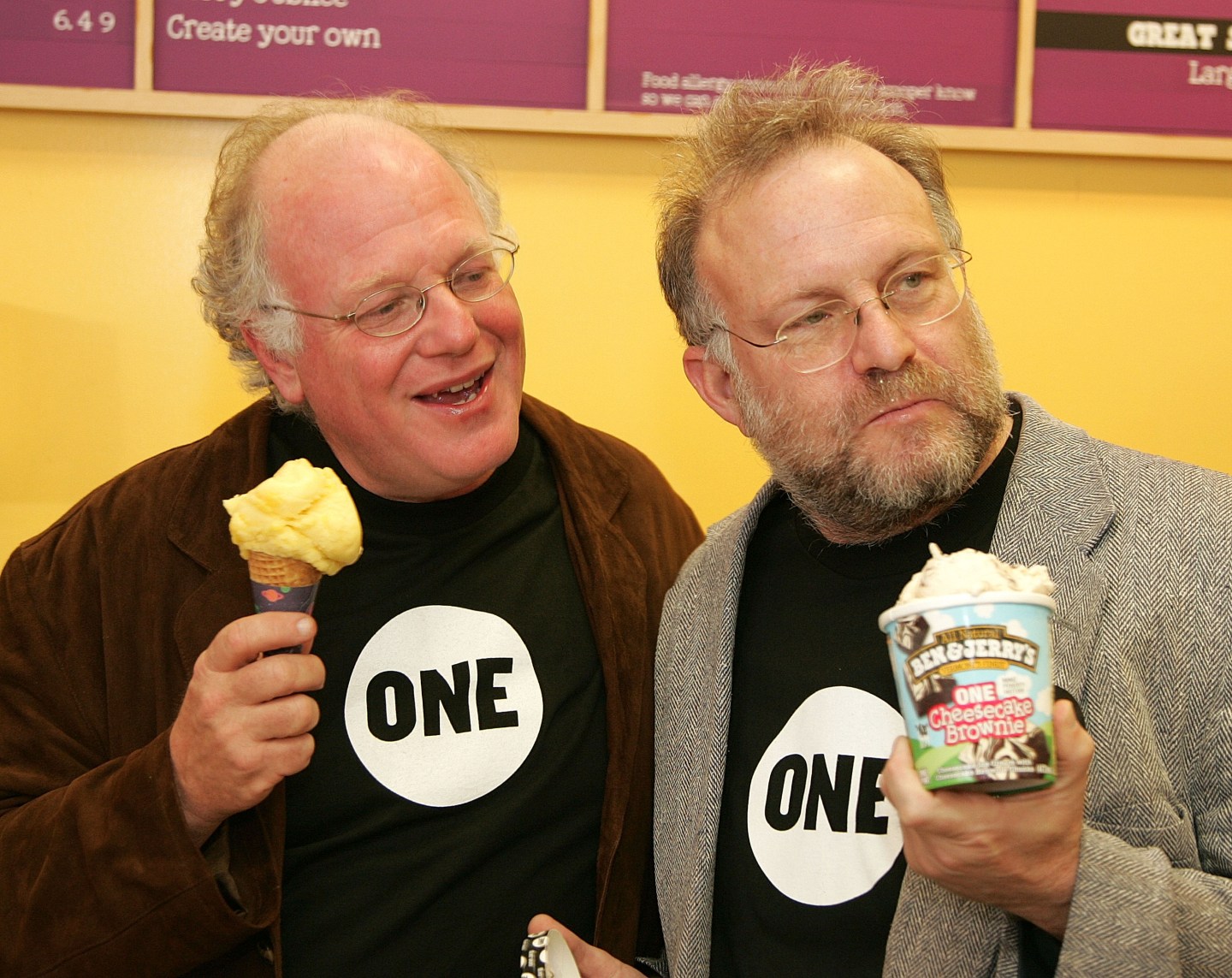 Ben & Jerry’s is known for the progressive views of its founders Ben Cohen (L) and Jerry Greenfield (R). Facing opprobrium for pulling out of the West Bank, Cohen and Greenfield declared publicly they were “proud Jews” and “supporters of the State of Israel,” who nonetheless rejected the legality of the settlements, where more than 600,000 Jews live.
Jason LaVeris—FilmMagic/Getty Images

It’s not often that selling ice cream turns into a heated international legal battle. But the fractious dispute between consumer giant Unilever and one of its own subsidiaries, Ben & Jerry’s—finally settled this week after 18 months—shows the perils faced by a companies wrestling political crosswinds in an age of intense brand sensitivity. And as another U.S. company, Airbnb, learned recently, coming to a good resolution in such situations can be especially difficult when the politics involve one tiny market: Israel.

The argument between Unilever and Ben & Jerry’s exploded in acrimony in July 2021, during Israel’s blistering summer, when Ben & Jerry’s—the Burlington, Vt., company renowned for the progressive views of its founders Ben Cohen and Jerry Greenfield—said it would no longer sell its ice cream in Jewish settlements on the West Bank and Golan Heights, which the U.N. and the European Union have declared illegal under international law; the U.S. held a similar stance but reversed it in 2019.

Ben & Jerry’s said its decision to pull out of the settlements aligned with its commitment to “human rights and dignity,” one of the 44-year-old brand’s founding principles. “We will stay in Israel through a different arrangement,” the statement said, leaving the details vague.

That was the opening shot in a series of legal battles between the ice-cream manufacturer and its parent Unilever, as well as Ben & Jerry’s Israeli licensee. The dispute has involved a fight over two parallel business issues: How much autonomy can a subsidiary have from its parent company? And how do global companies doing business in Israel avoid antagonizing either big Middle East markets or defenders of Israel—and by extension, how do they navigate markets that violate their other social commitments, like support for gay rights or action on climate change?

Cohen and Greenfield predicted such problems back in 2000, when Unilever bought Ben & Jerry’s for $326 million. Fearing their activism might someday collide with Unilever’s business interests, they wrangled highly unusual terms in the deal, keeping control of Ben & Jerry’s “social mission and brand integrity,” under an independent board and safeguarding their “critical global economic and social missions.”

The company’s progressive image came under threat last year when a group in Vermont campaigning for businesses to boycott Israeli settlements began publicizing Ben & Jerry’s sales there and chanted “shame!” outside the company’s headquarters—a discomforting sight for a brand associated with liberal politics.

For Unilever, too, the issue carried severe risk, not to mention a raft of lawsuits. Headquartered in London and selling in more than 190 countries, it, like Ben & Jerry’s, has declared itself a “purpose-led” company, focused on ethical and environmental commitments.

Ben & Jerry’s’ July decision to end sales in the settlements was taken without coordinating with Unilever, which sells its well-known products, like Dove soap and Lipton’s tea, in Israel and manufactures some items in the country. Yet the move erupted into full-blown fury against Unilever from pro-Israel groups, who declared the multinational anti-Semitic and anti-Israel.

New York, Colorado, and Illinois pulled hundreds of millions of dollars’ worth of Unilever stock from their public pension funds as accusations mounted that the consumer giant supported “BDS”—the boycott, divestment and sanctions movement against Israel.

Meanwhile, the ice-cream company’s partner in Israel, Avi Zinger, owner of American Quality Products, Ltd., sued Unilever in a New York court, arguing that the attempt to block West Bank sales violated the terms of his exclusive license, signed in 1988, and claiming he had no way under Israeli law to separate out West Bank sales even if he wanted to.

After months of feuding, Unilever had clearly had enough. Without consulting Ben & Jerry’s, it sold its ice cream operations in Israel to Zinger in June, leading Zinger’s New York attorney Alyza Lewin to warn, “Other corporations should take heed: BDS is bad for business.”

Unilever’s sale of the business to Zinger rendered his lawsuit moot. In fact, Zinger cast the deal as Unilever taking a stand against those boycotting Israel, calling it a “significant victory…and a resounding defeat for those who advocate discrimination and extortion.”

But Unilever’s legal headaches did not end there.

Ben & Jerry’s sued Unilever in the U.S. District Court in New York in September for secretly transferring its trademarks to Zinger, and thereby risking its progressive brand image, which it said would be “tarnished forever” unless Unilever abided by its independence.

After months of an apparent stalemate, Unilever finally announced on Thursday that the lawsuit “has been resolved,” while keeping the details confidential. Zinger said in a statement he was looking forward to selling Ben & Jerry’s ice cream year “under the Hebrew and Arabic trademarks throughout Israel and the West Bank long into the future.”

Zinger now has free rein to market the ice cream as he wants—he even suggested renaming the Chunky Money flavor “Judea and Samaria,” the Biblical name for the disputed West Bank region, which some religious pro-settlement groups use.

Unilever’s woes are over, but experts in corporate mergers and acquisitions caution that companies should make sure they are closely aligned with counterparts before inking M&A deals. “You don’t want to end up finding yourself acquired or acquiring some company where you are politically or socially on different ends of the spectrum,” Josh Margolin, a partner at Selendy Gay Elsberg, told Bloomberg News in August, referring to Ben & Jerry’s.

As the legal battle wound to its conclusion, Ben & Jerry’s publicly renounced their Israel-made ice cream last month, making it clear the goods were produced by “a completely separate and distinct entity,” despite being called Ben & Jerry’s. “Ben & Jerry’s position is clear,” it said in November. “Such sales are inconsistent with international law, fundamental human rights, and Ben & Jerry’s social mission.”

Ben & Jerry’s declined to talk to Fortune about the case. Unilever did not respond to requests for comment.

Human-rights and pro-Palestinian groups that track investments in Israel say the saga has highlighted the complexity inherent in doing business in Israel while steering clear of the country’s settlement policy.

“The point in going after Ben & Jerry’s was to have—no pun intended—a chilling effect on other companies that want to distinguish between Israel and the settlements,” says Lara Friedman, president of the Foundation for Middle East Peace, a Washington group advocating for Palestinian rights. She says she has watched increasingly vociferous action by Israeli officials and lawmakers against companies that question doing business on the West Bank.

From Israel’s standpoint, however, boycotting Israeli settlements is akin to questioning the very legality of Israel itself. Israeli President Isaac Herzog called Ben & Jerry’s decision “economic terrorism” and said the BDS movement was “seeking to undermine the State of Israel’s existence.”

That was Israel’s response to another iconic U.S. company—Airbnb.

In November 2018, after years of protests by pro-Palestinian groups, at its San Francisco, Portland, London and Paris offices, Airbnb announced it was delisting 200 properties on West Bank settlements, saying the occupation was “at the core of the dispute” between Israelis and Palestinians. The number of rentals was minuscule, compared with more than 20,000 Airbnbs in Israel, and the company said it would maintain listings in the Golan Heights and East Jerusalem, the Palestinian side of that city. “We know that people will disagree with this decision,” Airbnb said.

Nati Rom, the founder of Israel’s Lev Haolam organization which is active against the Palestnian-led boycott movement, walks next to an Airbnb apartment located in the Esh Kodesh outpost near the Jewish settlment of Shilo in the occupied West Bank on Nov. 20, 2018.
Menahem Kahana—AFP/Getty Images

That was an understatement. Like Unilever and Ben & Jerry’s, Airbnb faced immediate fury and legal action. Eighteen Jewish American property owners sued the company in a Delaware court, claiming it was discriminating against Jewish homeowners, while allowing Muslim and Christian Palestinian property owners to continue renting out their homes on Airbnb; they also demanded compensation for potential lost income from Airbnbs slated for removal from the platform. An Israeli property owner filed a similar lawsuit in a Jerusalem court, and Israel’s tourism minister Yariv Levin said he would seek to restrict Airbnb’s operations throughout the country in response.

Just five months later, Airbnb reversed its decision, saying it would keep the West Bank settlement listings on its platform, but donate all the revenues from them to “organizations dedicated to humanitarian aid.”

Just like Unilever, Airbnb found the anger sparked by its decision too great to withstand.

“From the Israeli government’s point of view this is all about precedence,” Mitchell Plitnick, a pro-Palestinian advocate in New York, tells Fortune. “They have been working for years to erase the 1948 armistice line,” which demarcated Israel’s borders when the country was established. “Anything that strengthens the distinction could set a precedent that they do not want set.”

Israel and its supporters reject that view. The American Jewish Committee, the major U.S. pro-Israel organization, based in New York, calls the BDS campaign “a simplistic, wrong-headed response to a complex situation, which singles out Israel for condemnation.”

And so, for Christmas week, you can still rent an Airbnb on the West Bank settlement of Ma’ale Adumim for $85 a night—a fraction of what it might cost in Jerusalem, just a few miles away.