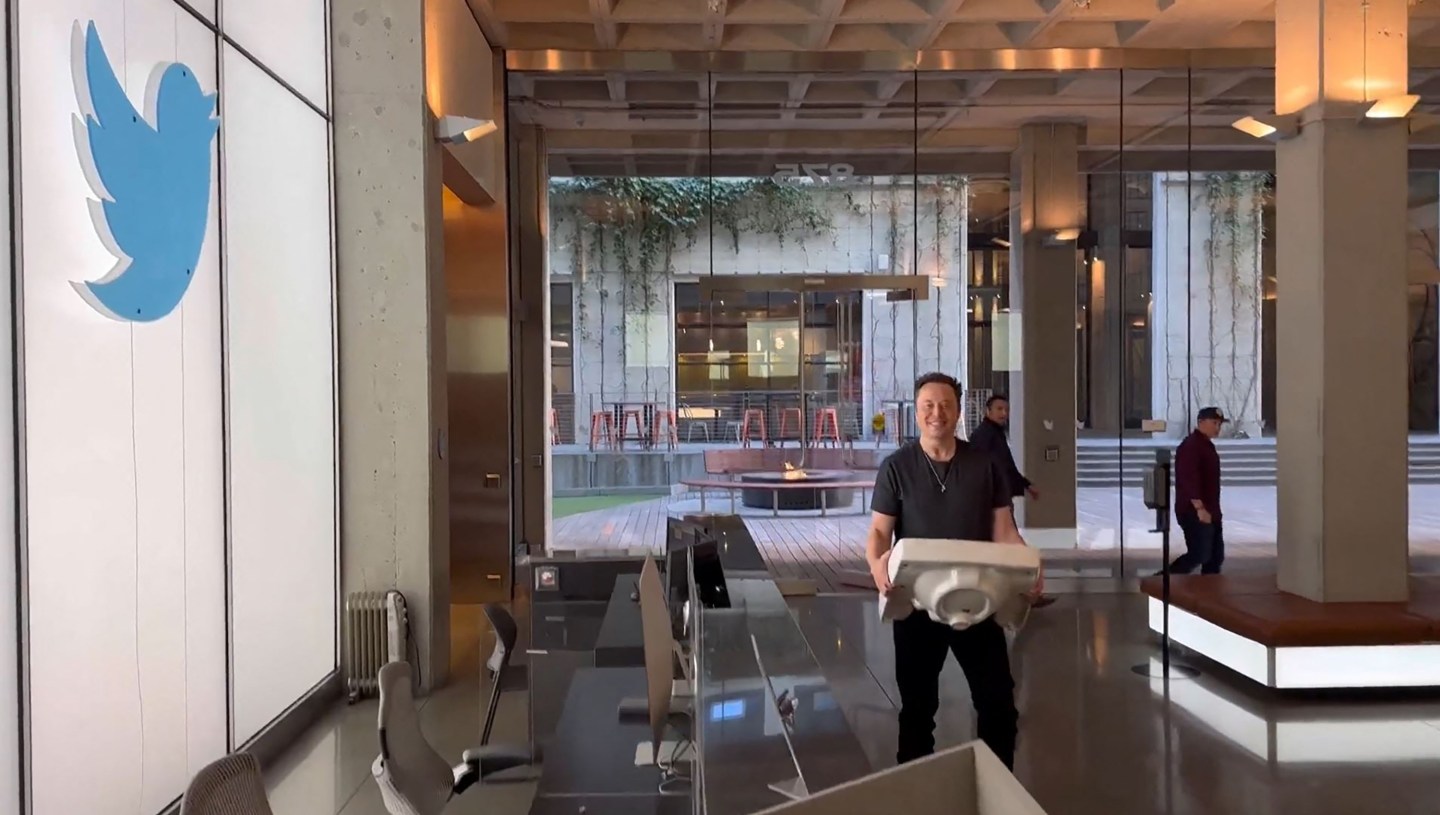 New Twitter CEO Elon Musk triumphantly enters the company's HQ. Items from the space are being auctioned off.
Twitter account of Elon Musk/AFP via Getty Images

If you’ve ever secretly wanted a six-foot-high sculpture of an @ sign that doubles as a planter, now is your chance.

The sculpture is one of hundreds of items from Twitter’s San Francisco headquarters going on the auction block, including a blue Twitter bird statue, a handful of Eames chairs, giant flat-panel TVs, and a variety of kitchen equipment ranging from a vegetable dryer to more than a dozen espresso machines.

The items were listed on the online site BidSpotter under the heading “Online Auction Sale Featuring Surplus Corporate Office Assets of Twitter,” with most items showing opening bid prices set at $25 and $50.

The auction follows Elon Musk’s $44 billion acquisition of Twitter in October. Musk has been racing to cut costs since he took over the social media company, a deal he tried unsuccessfully to back out of and for which he acknowledged he overpaid. Musk laid off half of the company’s 6,000 workers in November, and told those that remained to be prepared for a “hardcore” work life or to resign.

Musk has also told employees that there is “a good chance Twitter will not survive the upcoming economic downturn,” according to the AP, and tweeted in November that the company has seen a “massive drop in revenue,” as a result of advertisers pulling ads due to Musk’s hands-off approach to content moderation.

Nick Dove, a representative for Heritage Global Partners, which is handling the auction, told Fortune that “this auction has nothing to do with their financial position.”

“They’ve sold for $44 billion, and we’re selling a couple of chairs and desks and computers. So if anyone genuinely thinks that the revenue from selling a couple computers and chairs will pay for the mountain there, then they’re a moron,” he said. He cited auctions the company has for clients such as  Pfizer, Honeywell, Harley-Davidson, and Adidas. In a follow-up email, he pointed to a link to an auction that Twitter’s U.K. office held in January.

The San Francisco auction of Twitter’s gear will begin on Jan. 17, 2023, and end the following day.

The items in the auction are a testament to the perk-filled office life for Silicon Valley tech workers, where companies like Google, Meta, and Twitter have long competed to outdo each other amid a costly battle to lure tech talent. While the pandemic has upended many office life norms, many large tech companies and startups once served employees breakfast, lunch, and dinner at an assortment of on campus restaurants and cafes, as well as providing services like on-site massages and dry cleaning.

According to the online listings, payments can be made by wire transfer only: “Money is Due 48 Hours After Sale Closes.”