The office of the future will be intentional about in-person work, cater to employees, and driven by performance metrics 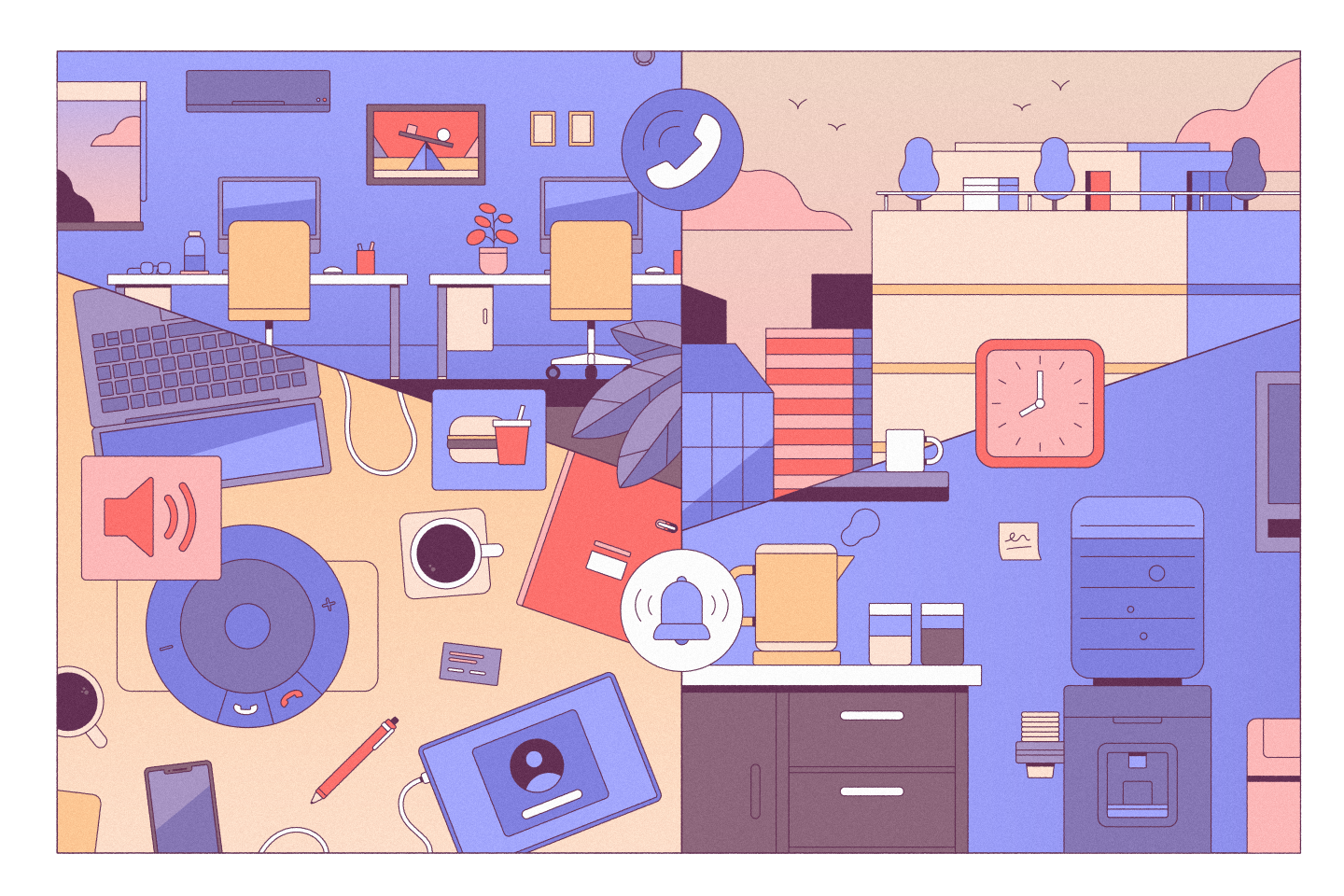 The office of the future will prioritize deliberate in-person interactions.
Illustrations by Studio Muti

Imagine you’re walking down a hallway. To your left, a garden is in full bloom. To your right, a small stream flows over rocks. Farther down the hall is a library and even farther still is a common area where people are gathered. No, you’re not at a spiritual retreat. You’re in the office of the future.

Preparing for the future of work is proving to be a struggle for senior executives, namely because of the clear divide between employee and leadership wants and needs. But the most successful companies—those who view talent as a direct revenue driver and treat it as such—are becoming increasingly pragmatic and realizing that the quintessential workplace has long been a bleak experience.

“Companies need to ask themselves why there’s been this de facto rebellion against the office, and that’s because it’s kind of sucked,” says Nick Lovegrove, a professor at Georgetown University’s McDonough School of Business, where he teaches courses on management, strategic problem-solving, and principled leadership.

Think about the typical pre-pandemic workday. Employees battled traffic to schlep into the office, where they were packed into small, tight spaces and sat in front of a screen for much of the day. The drudgery of the standard office life isn’t lost on leaders either, including those who seem to champion a total return to office. Even among the banking sect, which has been the most vigorous in its pro-office messaging, there’s been substantial nodding and winking between managers and employees, resulting in few workers actually showing up five days a week.

“Employees are pushing back and saying, ‘Well, if you want us back full-time, we’re out of here,’” says Lovegrove. “The current pattern seems to be a kind of desultory drift back to the office—but without much conviction or enthusiasm.”

As companies head into 2023, one would reasonably expect the return-to-office matter to be resolved by now, he notes. That hasn’t been the case. But one truth has emerged amid the terse return-or-not-return exchange: Remote work in some capacity is here to stay, and companies that push for some in-person work must be intentional in choreographing what office life entails.

Anna Tavis, a clinical professor and academic director of the human capital management department at the NYU School of Professional Studies, says companies will have to create an “ambiance” designed with workers in mind, much like they already do for customers. That means structuring the workplace—from air quality to spatial formatting—around how people behave and congregate.

“Companies will have to be more hospitality-minded, with employers acting like hosts in the office,” Tavis says. “We’ve long thought of creating companies that are hospitable to consumers and have now arrived at doing it for employees: How do we market to talent? What do they need? How do they react to certain things?”

Simply put, Tavis says, employers will have to make the workplace experience “attractive, dynamic, and magical” to compete with workers’ homes—akin to a hotel experience.

This more sophisticated evolution of work is of particular importance as companies rush to hit the diversity goals they published in 2020. Today’s employees consider a portfolio of options in determining what will benefit their careers long term. For many women and employees of color, a high salary isn’t enough; they want location flexibility. “There are going to be nuances around how companies attract certain populations, how those demographics want to work, and where they want to live,” Tavis says.

This shift in primary focus from the consumer experience to the employee experience has become deeply entrenched in business strategy, says Stephan Meier,  a professor and chair of the management division at Columbia Business School. “Employees are the new customers.”

As such, employers will have to kowtow to workers to an extent. Take Elon Musk. After scrapping Twitter’s work-from-home policy and ordering staffers back to the office, employees left the social media platform in droves, prompting an about-face from Musk. Similarly, JPMorgan CEO Jamie Dimon, who has long been a return-to-office diehard, seemingly bowed to employee pressure for remote work earlier this year.

Instances like these aren’t entirely surprising, Meier says, and moving forward, companies will have to pivot from dictating how many days employees should step foot into the office to making those office days meaningful for workers.

“Obviously, there are certain things we can do better at home,” he says. “But if employers want those so-called watercooler moments, managers have to be intentional and deliberate about organizing those days so they can exploit the times workers are together in person.”

Lovegrove echoes this sentiment. “There’s this myth of the incidental interaction as a driver of business performance,” he says. While he acknowledges that it’s not completely untrue, it’s also not a robust, provable phenomenon. “What companies need to prioritize is having people in the office in a substantive way to create that watercooler effect, which they’re much more likely to do with a retreat or an offsite.”

Such social gatherings, he says, create a greater and more effectual sense of belonging and shared commitment.

Many return-to-office crusaders cite the role fortuitous interactions play in building and strengthening corporate culture and fostering spirited debate and innovative thinking. But Meier notes that historically, companies have been phoning it in and leaving said watercooler moments to chance. “When I talk to executives who want employees back five days a week…I ask, ‘What did you do to make those watercooler moments happen?’ And they say, ‘Well, it just happened.’ And it does happen—sometimes. And sometimes not. So they have to be much more deliberate about organizing the workplace, so employees are only required to be there when those moments happen.”

That will require leaders to ask: What tasks should we do in the office? What should we do at home? How is the workplace actually structured, and how do we reconfigure the physical office to optimize for those watercooler moments?

A number of companies seem to settle for hybrid work as a compromise between two extremes—fully remote or fully in office. But such thinking does their employees a disservice, Meier says. “The most successful organizations will be the ones who figure out how to make the best out of remote days and the best out of in-office days. But it’ll require a shift in thinking from having the undertone of, ‘Oh, we have to do hybrid because that’s what the new generation wants, but it’s not as good as in-person.’”

Kaleem Clarkson, COO at the remote work consultancy firm Blend Me, ostensibly believes that fully remote work is the inevitable destination, particularly for startups that don’t have the same financial resources to woo top talent as their sprawling public counterparts. He says companies that want to remain competitive in the talent market will soon have to soften their inflexible stance on where employees work.

“Now that employees have experienced the freedom and autonomy of remote work, it will be close to impossible to bottle it back up,” Clarkson says. “There’s this change in societal thinking where people realize they don’t have to choose between family and finances.”

As small companies increasingly employ remote work to entice top talent, the downstream effect will be that larger corporations have to become more location agnostic and less dictatorial in their office return requirements.

“Bigger companies need to remember that, now, even family businesses and local companies are competing for talent globally in your industry in countries like China and Sweden, not to talk of inter-U.S. So they’re no longer just a local competitor, they’re a global competitor, and that will move larger companies’ hands.” Still, large companies have far more runway to be forceful about returning to the office.

Regardless of which end leaders fall on the in-office to fully remote spectrum, most agree that a lack of in-person collaboration and related social networks has some downsides and a psychological impact. “That [social] bonding is so important, and it benefits everyone, including people who are more tenured, more mature, and have more resources,” Tavis says. “But in terms of career agility for younger people, it can be detrimental to work only from home, especially from the mental health perspective.”

Clarkson accepts that companies can’t replace or replicate the energy symptomatic of in-person work, though he points to promising but still-nascent technological advancements like the metaverse as augmentative, but not substitutive, for face-to-face interactions. “If we hold on to the office, then we need to recognize this idea of it as a clubhouse and a place for connection because some employees want hybrid because they’re lonely and isolated. And where do you meet your people? You meet your people at work.”

But not just any kind of work, Meier notes. Work that’s collaborative, intentional, and opposed to the new hybrid standard that sees employees come to the office twice a week, sit in their cubicles, plop in headphones, and work in silos. “Here’s the thing: People aren’t all shirkers. They actually want to work, but they want to do interesting work.”

What companies are slowly recognizing, he says, is that people are motivated by more than money; they’re also motivated by having autonomy, discretion, meaning and purpose, belonging and identity at work, and tasks that are an optimal utilization of their skills.

“Many executives are so focused on having people in seats that they’re missing the point that even when employees are in the office, they can still be checked out and not tapping their full human potential,” Meier says. “The successful organizations will figure out that if the performance metrics are there, they shouldn’t care if employees are doing their work in downward facing dog.”