Scientists are partnering with Nissan, GM, and Toyota to break up those annoying ‘phantom’ traffic jams using A.I. and cruise control 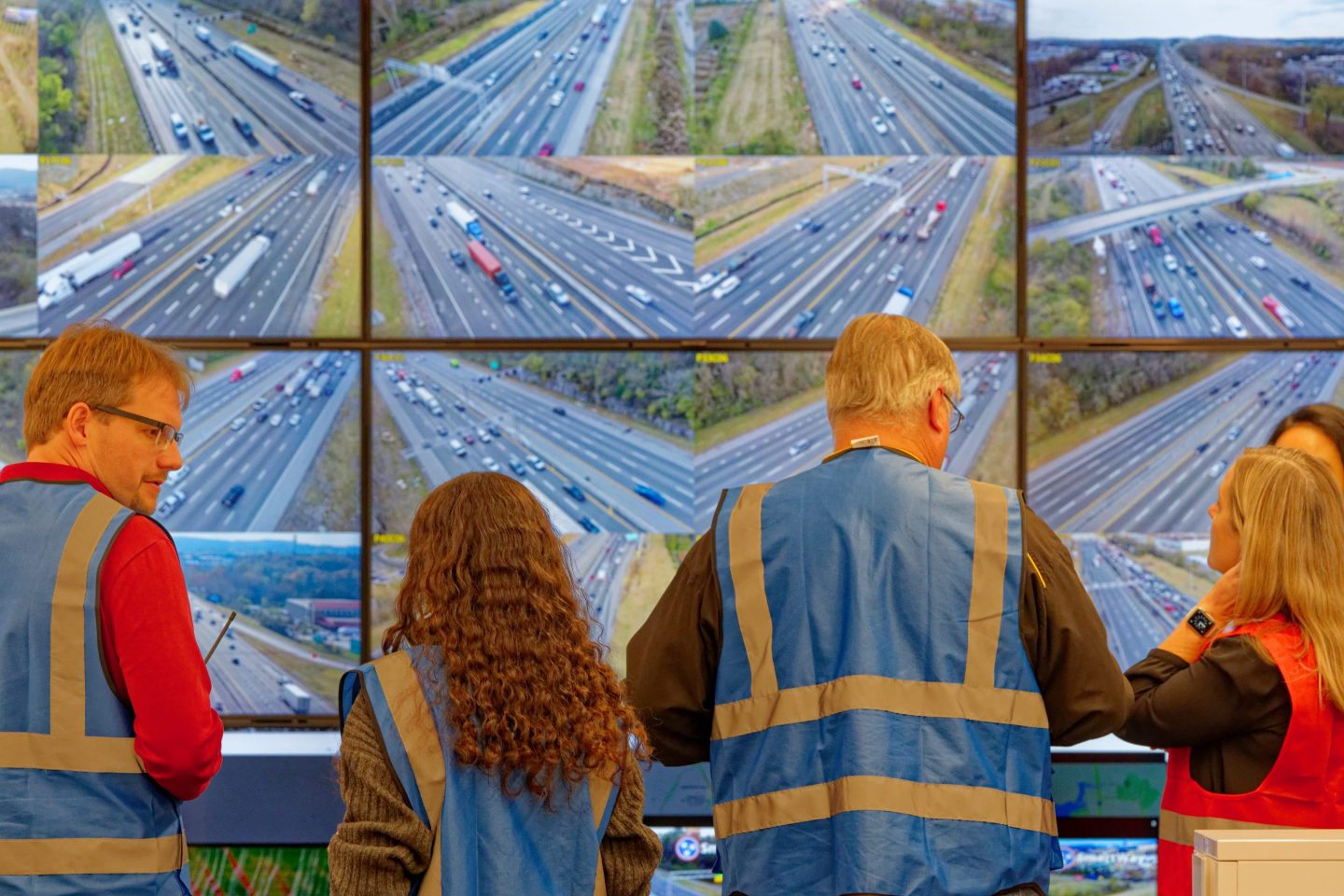 On first glance, the mid-November traffic on Nashville’s Interstate 24 looked like any other morning rush hour—too many cars packed onto a roadway at one time. But if you could access data inside every car, you’d notice that some weren’t speeding up and slowing down as aggressively as the rest. They were driving at a consistent speed instead of rushing to close the gap with the car in front of them. By doing so, they were avoiding much of the aggressive breaking and acceleration common in congested traffic. Under even closer examination, the calmer cars seemed to influence those behind them, turning the staccato rhythm of rush hour into a more constant flow.

The 100 “influencer” vehicles on the interstate were part of a test by CIRCLES, a consortium of universities, government and automakers like Nissan, GM and Toyota aiming to pair existing cruise control technology with A.I. and auto data connections to reduce the instabilities in traffic flow, known as “phantom jams,” that cause all sorts of problems on the road.

Specially-equipped cars sit in a parking lot in Nashville on Nov. 17, 2022. In a study, the cars’ cruise control was modified to react to the overall flow of traffic using artificial intelligence.
Mark Humphrey—AP

According to New York State’s Department of Transportation, so-called ‘Jack-rabbit’ starts and breaking can increase fuel consumption by 40%—but such aggressive driving only cuts travel time by 4%. Research in Belgium in the 1990s found that during rush hour each car’s fuel consumption and CO2 emissions increased by 20% to 45%. And a meta-analysis of accident data published in 2021 found that there was a 36% increase in crash injury risk during the morning commute.

Once the Tennessee data is crunched over the coming months, Alexandre Bayen, the UC Berkeley professor of electrical engineering and computer science who is leading the effort, expects it to show that introducing even a small number of connected, A.I.-powered vehicles—less than 5% of the total—to the traffic flow will cut energy consumption by 10%.

Why are there so many bad drivers?

Researchers in traffic studies point to a seminal Japanese experiment published in 2008 that showed, in controlled circumstances, how human habit forms “phantom jam” congestion. In the experiment, researchers put 22 vehicles on a 230-meter circular track and had them all start by driving clockwise at 30 km/h with uniform spacing. Within moments, the smooth flow breaks down, and some vehicles are forced to stop until the traffic jam clears.

The upshot is clear: Humans habit makes us inherently bad at driving in crowds.

Human reactions naturally suffer a slight delay, Bayen says. When we see we’re approaching the car in front of us, we break a hair too late. If traffic is sufficiently dense, the driver behind us must break even harder, and the chain reaction continues backward. When the car in front speeds up, our instinct is to rush forward to fill the gap, which starts the process again.

It would be far better, CIRCLES researchers suggest, if instead of speeding up and then hitting the breaks, we find an ideal speed based on the number of vehicles on the road and stick to it.

And so, with a $3.5 million grant from the U.S. Department of Energy and several others from the National Science Foundation, CIRCLES set out in March 2020 to deploy technology to break human’s bad driving habits.

The mathematic principle behind traffic jams

Around the same time as the Japan ring road experiment, fluid dynamics experts and mathematicians at MIT discovered that the same equations that govern an explosion’s detonation waves apply to the spreading effect of stop-and-go driving. They called the waves set off by sudden breaking events “jamitons.”

“Small perturbations grow into these nonlinear traveling waves that travel backwards along the highway,” says Benjamin Seibold, one of the experts who’s now a mathematics professor at Temple University and part of the CIRCLES group. “Cars run into them—a sudden drop in velocity in the car ahead—and you have to brake as well. And then you slowly speed up out of them again.”

Informed by these mathematical models, Seibold and his colleagues posited that inserting a driver immune to sudden acceleration and deceleration could avoid or eliminate the waves.

To test their theory, the researchers repeated the Japanese experiment, only this time, they waited until phantom jams began to develop and then activated a control car inside the loop. By making it travel at the desired velocity when it was safe and slowing down when necessary, the control vehicle dampened slow-and-speed waves among more than 20 other cars.

With the control car in place, fuel consumption dropped 39.8%, excessive braking events fell from 8.58 per vehicle per kilometer to 0.12, and with a higher average speed—cars are not stuck in jams—the number of cars that passed around the circle increased 14.1%.

“The only question that was left—which is a big one—is yes, you demonstrated this in a parking lot, where you had a single lane, you’ve isolated dynamics on the flow, you don’t have on ramps, you don’t have multiple lanes or lane switching, you don’t have trucks intermixed with other vehicles,” Seibold says. “So will it actually work on the highway?”

Perhaps what most excites traffic engineers about the system tested by CIRCLES is that it uses existing technology and doesn’t require the much-heralded and as yet undelivered fully autonomous driving known as “Level 5.” Many cars produced over the last decade already come equipped with adaptive cruise control, the system whereby the driver sets a target speed and then the car slows automatically when it senses it’s getting too close to the car in front.

The innovation of the CIRCLES system is that it sends real-time traffic data to an A.I. controller added to the adaptive cruise control system. The cars receive an overall speed plan from the cloud and then use A.I. to determine which actions to take in their local traffic conditions.

The A.I. can modify the target speed itself based on traffic conditions ahead. Under the system, even with a gap in front, your car may decide to stay at a gentle 40 mph instead of speeding to 50 mph—especially if there is a phantom jam a quarter mile down the road. Your car’s actions would slow the aggressive behavior of drivers behind you, avoiding further waves of phantom jams. In theory, you would arrive in the same time, just without the stress, wasted gas, and extra emissions of herky-jerky driving.

“It could mean that your vehicle sometimes might choose a little bit of a bigger gap than you would do as a human driver,” says Seibold, “You still get generally to your destination at the same time.”

With the 100 “influencer” car experiment in Nashville complete, CIRCLES researchers will now crunch the video data from 300 pole-mounted ultra-HD cameras on the six-mile stretch of I-24 that Bayen calls the “best instrumented freeway in the world.” The analysis will determine how much fuel use and emissions fell during the experiment, with the aim of finding the regulatory and automaker support to apply the pilot to the real world.

A researcher prepares a vehicle for the CIRCLES experiment, outfitting it with A.I. and communication-enabled adaptive cruise control tech.
Michael Todd—Vanderbilt University

There is of course still much to be perfected in designing the controls for this new take on semi-automated driving. Set the speed too slow with big gaps between cars and drivers will pass you, making the exercise pointless. Set it too high and too-small gaps invite accidents.

Sharon Hornstein, a senior researcher in the global control and learning systems group at GM, which took part in the experiment, says there are lingering questions about how the experiment will work with different locations, road structures, and traffic conditions, and whether automobiles’ existing connectivity is enough to scale up CIRCLES’ solution. Still, she says, “It’s encouraging to see that a smart extension of adaptive cruise control system seems to be able to improve traffic behavior and energy consumption.”