The British royal family correctly responds to a charge of racism, thanks to Harry and Megan 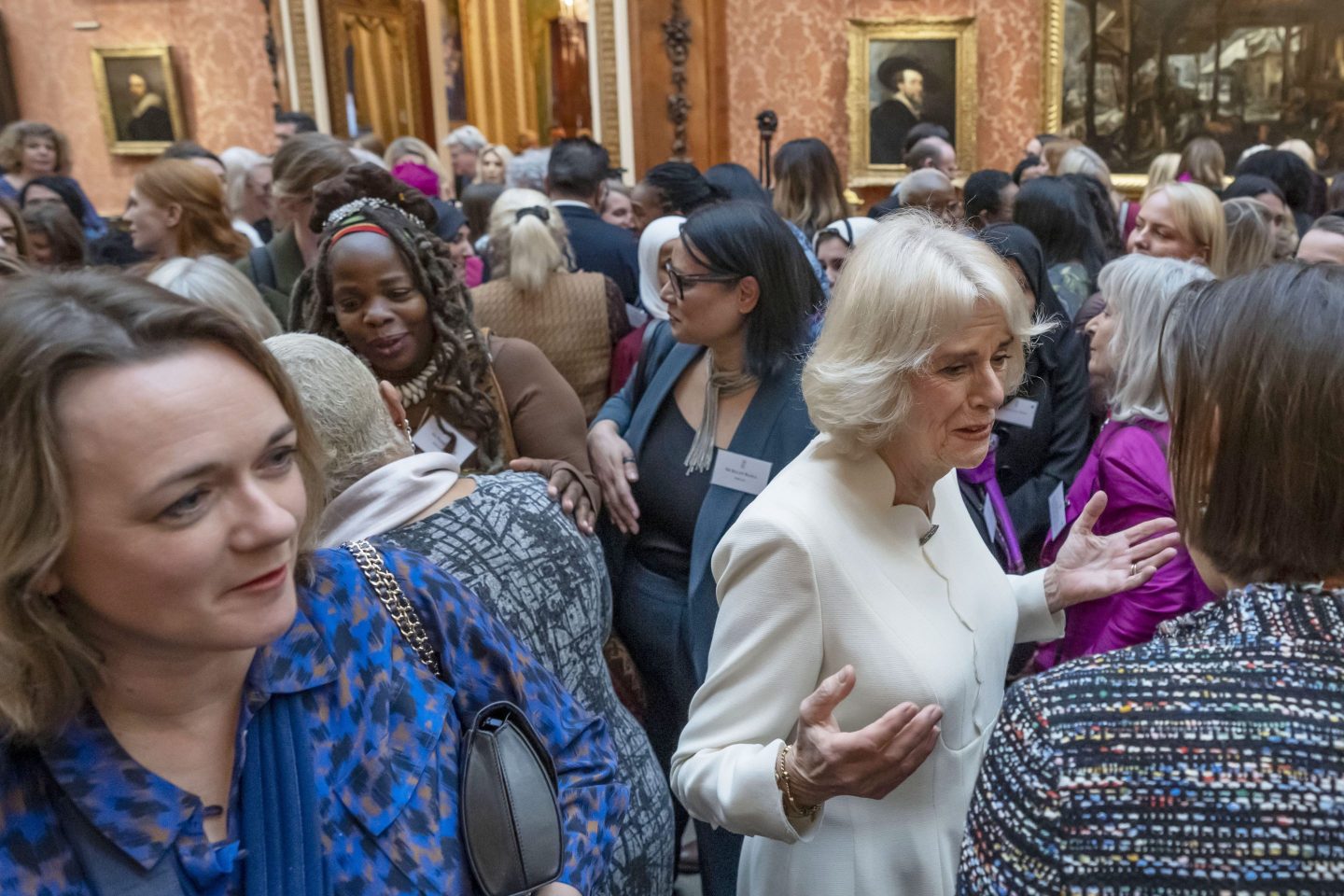 Camilla, Queen Consort hosts a reception attended by Ngozi Fulani (back left), chief executive of the charity Sistah Space, to raise awareness of violence against women and girls as part of the UN 16 days of Activism against Gender-Based Violence, in Buckingham Palace on Nov. 29, 2022 in London, England.
Kin Cheung—WPA Pool/Getty Images

A new monarch, a familiar scandal.

The British royal institution has found itself in yet another racism-themed scandal. This time, it was a longtime aide who insulted a Black nonprofit leader at an event at Buckingham Palace by moving her hair, studying her nametag, and repeatedly asking “where she was really from.”

“It was like an interrogation,” Ngozi Fulani, who runs the domestic violence charity Sistah Space, told the BBC. “Although it’s not physical violence—it is an abuse.” Sistah Space is the only U.K. organization that focuses on the gender violence issues facing girls and women of African and Caribbean descent. “And that felt like violence to me, and when you put your hand in my hair like I’m not even a person—you can just do what you want and say what you want—I don’t want to be in your presence.”

The aide in question was Lady Susan Hussey, a longtime lady-in-waiting to the late Queen Elizabeth and Prince William’s godmother. The event was a reception for advocates and policymakers at Buckingham Palace as part of the United Nations’s “16 Days of Activism Against Gender-Based Violence.” The event was hosted by the Queen Consort and guests included Sophie, Countess of Wessex, Queen Rania of Jordan, Queen Mathilde of Belgium, Crown Princess Mary of Denmark, and First Lady of Ukraine Olena Zelenska.

So, you see where this would be a problem.

That this ugly microaggression has now been heard around the world is some form of progress, an affirmation that the current royal hierarchy better understands what is at stake. Hussey resigned from her duties immediately after the incident went public, and a spokesperson for Prince William said, “Racism has no place in our society.”

And others say this affirms the many painful allegations leveled by the Duke and Duchess of Sussex.

“Meghan Markle talked about this, and she got roundly abused—and she’s still the target of negativity in the British press,” Diane Abbott, a Labour MP who was the first Black woman elected to the House of Commons in 1987 and whose constituency includes Fulani, told CNN. “I think this incident shows that what Meghan Markle was trying to indicate is true.”

Meghan and Harry risked their lives, livelihoods, and legacies to make the private assaults they experienced public, a risk that all advocates, allies, truthtellers, and whistleblowers share. Because of their work, we are all a bit closer to a shared understanding of what it means to question a person’s legitimacy publicly, as Fulani experienced.

And because we are navigating the conversation that they started, we can now turn our focus to why a charity like Sistah Space is still necessary.

In an interview with Sky News, Fulani shared details of her life growing up as the victim of racist abuse and systemic neglect as the child of immigrants. “There are so many things that women like us have to consider before we access mainstream services,” she said, identifying specific biases that Black victims must navigate to get help.

“We are often met by people who see Black women as not in need of protection, we often get things like ‘Strong woman like you, I can’t believe anybody would do anything to you.’ So this tendency to brush off domestic abuse and sexual abuse is so inherent that most Black women don’t see the point in reporting domestic abuse to a system that doesn’t see them and doesn’t listen.”

Wishing you a powerful weekend.

Fortune's newest newsletter, the Impact Report, is launching this Sunday, Dec. 4. Written weekly by CEO Daily contributor and Fortune Connect executive editor Peter Vanham, the newsletter will help business leaders navigate the rules, challenges, and expectations of ESG with insights on the latest trends and perspectives from executives and insiders across industries. It’s going to be a must-read.
Sign up here.

California is poised to pass meaningful reparations reforms. A nine-person Reparations Task Force has been traveling the state rooting out the long-term impacts of racist policies and actions and is preparing a comprehensive set of recommendations to be published in 2023. While no details are yet available, the panel has focused on five areas for potential compensation: housing discrimination, mass incarceration, unjust property seizures, devaluation of Black businesses, and health care. “We are looking at reparations on a scale that is the largest since Reconstruction,” says task force member Jovan Scott Lewis, a professor at the University of California, Berkeley. In the case of housing discrimination, the task force estimates compensation of around $569 billion, with $223,200 per person.
New York Times

A new alliance between the Justice Department and the Bureau of Indian Affairs is the first update to the working relationship in more than 30 years. Plans include new cooperation and information-sharing arrangements between the two agencies and a special unit designed to investigate the cases of missing and murdered Indigenous women, which often go unsolved. The new arrangement was announced by Attorney General Merrick Garland at the 2022 White House Tribal Nations Summit on a panel featuring Interior Secretary Deb Haaland, the nation’s first Native American cabinet secretary.
The Hill

How “good deaths” became a billion-dollar business. Is there no good left in the world? You’ll be tempted to say no after reading this story about hospice services being sold to people who were not, in fact, dying but who did need health care for chronic conditions like emphysema and diabetes. “We’d find run-down places where people were more on the poverty line,” one sales rep for national chain AseraCare, tells the New Yorker. “You’re looking for uneducated people, if you will, because you’re able to provide something to them and meet a need.”
New Yorker

“I can trace eight generations of my Lakota ancestors being removed from the land of their lifeblood to the reservation, just as I can trace seven generations of Norwegian and English ancestors taking that land…When we acknowledge the Boise Valley ancestors and their land, we make room for that story of removal that was genocidal in purpose. When we tell those stories honestly and fully, we heal, and our ancestors heal with us.”

—A “land acknowledgment” convocation speech written by Boise State University doctoral student Melanie Fillmore. After submitting her speech for review, the university canceled it amid fears the state legislature would pull school funding.