With Bret Taylor’s departure from Salesforce, just 7 companies in the Fortune 500 have a co-CEO 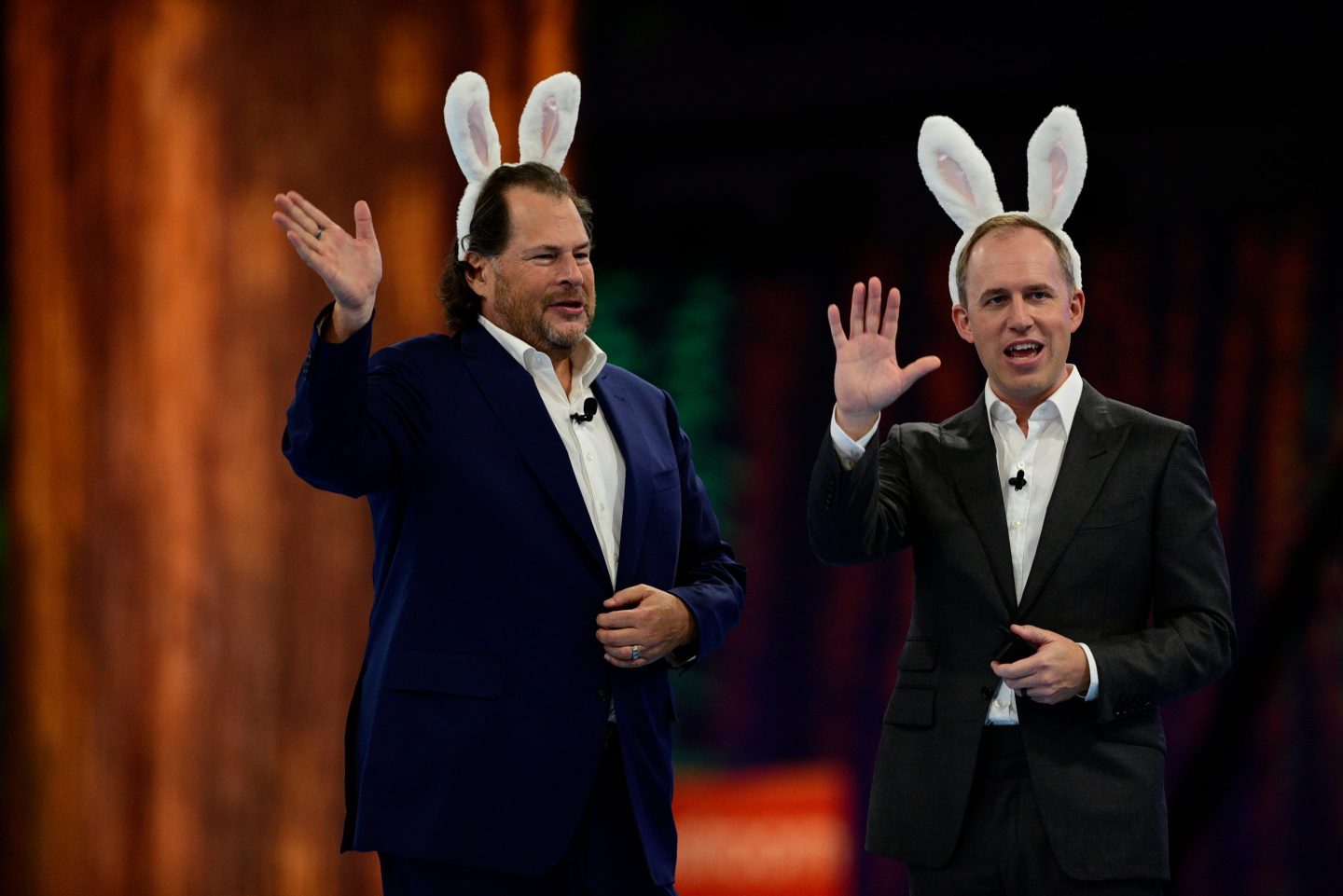 In a statement from Salesforce, Bret Taylor (at right, with founder Marc Benioff) said he planned to return to his “entrepreneurial roots.”
Marlena Sloss—Bloomberg/Getty Images

Bret Taylor, perhaps best known as Twitter’s board chair before Elon Musk took that company private, surprised everyone when he resigned from his day job as co-CEO of Salesforce this week.

His departure raised questions, once again, about the wisdom of demanding that two executives share the top job. Intuitively, it seems like an impossible ask of the types of executives who rise to the C-suite with sights set on the corner office.

Governance experts hold mixed opinions about the structure, one that’s more common in family-owned and private firms than in listed companies. The dual-leader system is a tradition in private equity, but only about 4% of public companies have two chiefs, according to Dinesh Hasija, assistant professor of management at Augusta University’s James M. Hull College of Business.

– Markel, though the insurer will have only one CEO again in 2023

Hasija calls the co-CEO model a double-edged sword. He says that two leaders might create confusion or lose trust in each other, and decision-making might consequently suffer.

But when the arrangement works, there are several benefits. CEOs co-running a company can positively impact its corporate social responsibility record, according to research led by Hasija. That finding makes sense, he says. “[CSR] is not really about performance. It’s not about profitability. It’s about addressing the needs of multiple stakeholders, and when you have two people doing that, they are reaching out to different stakeholders.”

For the same reason, he expects to see more companies experiment with co-chiefs. “The demands on the CEO are increasing over time, and it’s creating issues for one CEO to handle all of these issues internally and externally,” he argues.

Read more about what Hasija and other experts view as the right business conditions for co-CEOs; why a two-person team may outperform its solo counterpart; and the role boards should play in supporting co-leaders, here.

“The real answer is that my boss at the time, who hired me, and Connie Chung and Bernie Shaw, was totally 100% committed to affirmative action. He was not going to let us fail. And the commitment of the boss is so vital for anything to succeed.”

👓 Read: If you can’t explain the difference between an “executive” chair and a regular chair of the board, you’re not alone. Thankfully, three business school professors scoured the data and analyzed press releases from companies like Amazon, Google, and Ford to determine how companies use and benefit from adding the fancier title.

📖 Bookmark: In a new report, the Global Unions Committee on Workers’ Capital examines how organized employees can protect investors from human rights risks, support diversity goals, improve productivity, and more. The key message: Unions and investors are working toward the same goals.

Ingersoll-Rand tapped Jennifer Hartsock, chief information and digital officer at Cargill, to join its board. The carbon-credit financier Invert appointed three new board members, including Stacy Kauk, head of sustainability at Shopify. Abid Rizvi, CEO of AriZona Beverages, joined the board at Ollie’s Bargain Outlet. Pipeline giant Enbridge appointed Pamela Carter, former president of Cummins and onetime Indiana attorney general, to its board. Earlier this month, Verizon called on Vittorio Colao, former CEO of Vodafone, to become a director.

- Silicon Valley VC firm Andreessen Horowitz is continuing to diversify, but will market conditions force it to curb its ambitions of becoming a financial behemoth?

- This Guardian essay on the neurology of power and why the powerful have blind spots isn’t about boardrooms or C-suites, but the same fascinating findings apply.

- It isn’t only social media companies that need moderation experts. The proliferation of misinformation is a “Fortune 500 problem,” one expert told the New York Times.

- As Twitter loses advertisers and users flee for safer sites, LinkedIn, the business social media site, stands to benefit. It could even become a Twitter-like watering hole.

Leaders have struggled to find a coherent approach to politics in the workplace. Some have gone with the scorched-earth route, banning political discussions altogether. Others have picked causes that made sense to them or hired consultants to determine how and when to respond to polarizing topics and events. Eitan Hersh, a political scientist researching the role of politics in the workplace, has a take that may resonate with people who feel uneasy about what they see playing out in many white-collar companies.

Here’s a snippet from his essay in The Atlantic:

“Some forms of political engagement at the office have distinct and understandable goals. Workers want to have a say in how the firm does business; employers want to show that they care about the demands of customers and staff. But some of today’s political office culture does not even pretend to be strategic. Workers might gather around a TV screen to commiserate during major news events or fish for approval by sharing news articles in the employee Slack channel. Such activity functions as group therapy during political ups and downs. It does not change election results. It is pure political hobbyism—a performative form of civic engagement that has become the white-collar set’s preferred approach to public affairs.”