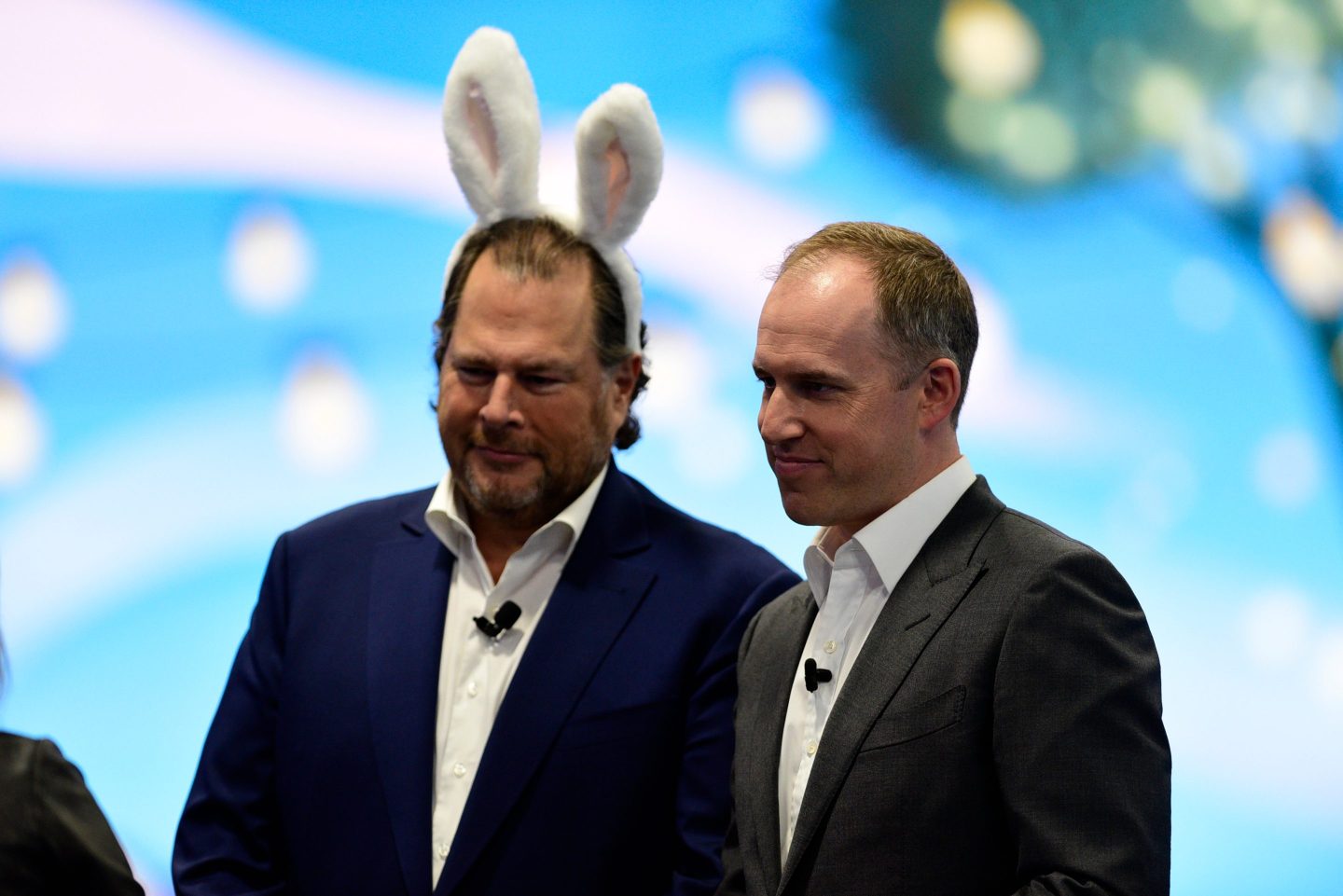 “Even though they are two CEOs, in reality, we all know that a cofounder is much more powerful than the incoming CEO,” says Dinesh Hasija, assistant professor of management at Augusta University.
Getty Images—Marlena Sloss/Bloomberg

Bret Taylor’s resignation as co-CEO of Salesforce surprised those inside and outside the company on Wednesday. Taylor shared the top position with the cloud-software maker’s founder Marc Benioff for one year, quickly moving up the ranks in his six years at the firm.

Salesforce is selling the story that Taylor experienced a change of heart and wanted to return to his “entrepreneurial roots.” Others speculate that Taylor has been tapped as CEO of Twitter, where he was chair of the board during the company’s monthslong, famously fraught sale to Elon Musk. But it’s also possible that Taylor was dissatisfied with the role and unwilling to sink another year into it—he’s the second co-CEO to leave a business marriage to Benioff.

Whatever prompted the breakup, Taylor’s departure is unlikely to change anyone’s mind about whether co-CEOs work, a question that more boards may need to consider as the arrangement becomes more common. Those who doubt the efficacy of power-sharing will see Taylor’s resignation as confirmation that, as Charles Elson, director of the Weinberg Center for Corporate Governance at the University of Delaware, once told the Wall Street Journal, “Two heads are not better than one.” However, those who champion the model—especially as companies move to flatter, more democratic management structures—will point to the power imbalance between Benioff and Taylor as a fatal flaw. “Even though they are two CEOs, in reality, we all know that a cofounder is much more powerful than the incoming CEO,” says Dinesh Hasija, assistant professor of management at Augusta University’s James M. Hull College of Business. Co-CEOs need equal footing to be sustainable, he explains. At Salesforce, Benioff had the final say by design, according to The Information.

When co-CEO arrangements work well, the benefits are substantial. Having two leaders divide and conquer the long list of chief executive duties can help cut the risk of burnout at the top. “They can be in two places at once—literally. They can form a left-brain/right-brain partnership,” Marc Feigen, a.k.a the CEO whisperer and head of Feigen Advisors, wrote in a recent Harvard Business Review story, coauthored by Michael Jenkins, a partner at the consulting firm Kearney, and Anton Warendh, a director at Feigen Advisors. Their analysis found that co-CEOs even outperform solo CEOs.

“One CEO can focus on technology-driven transformation while the other attends to more traditional aspects of the business, such as marketing, finance, and operations,” the trio wrote, adding that the co-CEO arrangement doubles the opportunities for diversity in the C-suite.

Despite Benioff’s proclamations about gender parity and diversity, Salesforce has notably failed twice to use co-CEO jobs to bring racial or gender diversity to the chief station.

CEOs co-running a company can also positively impact a business’s corporate social responsibility record, according to research led by Hasija. “[CSR] is not really about performance. It’s not about profitability. It’s about addressing the needs of multiple stakeholders, and when you have two people doing that, they are reaching out to different stakeholders,” he says. As CEO demands increase, he expects more public companies to adopt the model that’s currently more common among private, family-owned firms and even encourages more experimentation with it.

Still, Hasija says that splitting the job works best when a company has a complex structure and many divisions, enough for the CEOs to have clear spheres of influence. Salesforce, in his mind, is not the right candidate for a dual CEO post.

Generally speaking, the co-CEO role is “a double-edged sword” because many things can go wrong, he says. Co-CEOs might contradict each other or leave their direct reports confused about who is making a decision. Friction can develop, as is natural in any close relationship, and trust can become an issue. Companies like Chipotle, SAP, and Carlyle Group have all abandoned the structure in the past. And in 2020, SAP said it gave up on co-CEOs because the COVID crisis called for “unambiguous steering.”

Executive coaching may be necessary to blunt the threat of discord between co-CEOs, according to Manfred Kets de Vries, a Dutch management scholar and professor at INSEAD. He argues in an essay that “constant monitoring can ensure that the co-leadership runs smoothly. Left to their own devices, the two leaders may devolve into separate worlds.”

But boards also have a role to play in supporting co-CEOs by refraining from meddling in their relationship, cozying up to one executive over the other and thus inciting division, and becoming the “court of appeals” during conflicts.  “Disagreements should be brought to the board only if the two CEOs do so together,” Feigen and company warn.

Moreover, boards should have a contingency plan so they’re not blindsided should the relationship sour, says Augusta University’s Hasija. Sometimes, the co-CEO role is set up as part of a succession scheme, which seems to be the idea at Netflix. That can work, too, and even create more stability at the top. But in most cases, if the board is doing its job, it will see what’s percolating between co-CEOs and have a good sense of when one leader is preparing to move on.