Three weeks ago Sam Bankman-Fried and Anthony Scaramucci were fundraising together in the Middle East. Now the ‘Mooch’ faces losing SBF’s 30% stake in his SkyBridge hedge fund which is frozen in bankruptcy 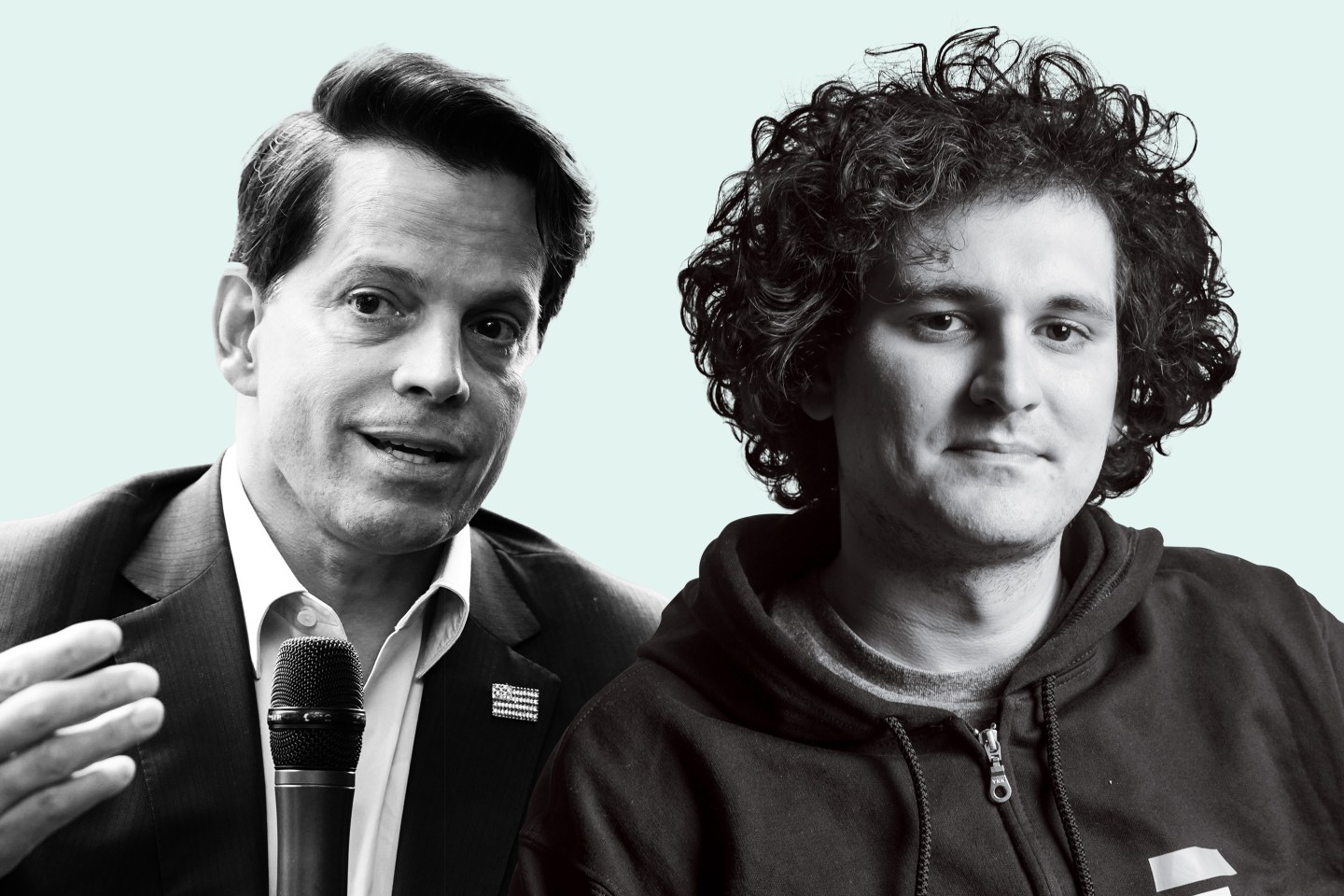 A mere three weeks ago, Sam Bankman-Fried and Anthony Scaramucci were on top of the world—the crypto world at least, traipsing through the Middle East on a grand fundraising tour. “We embarked upon a Middle East trip to Riyadh, Dubai, and Abu Dhabi,” Scaramucci recently said during the 2022 Bloomberg New Economy Forum in Singapore on Nov. 15. Scaramucci explained he was there for the Future Investment Initiative Conference in Saudi Arabia that took place on October 25, but he then hosted SBF on a fundraising tour to help him raise money for FTX.

Friendly alliances can fall apart for many reasons: time, distance, petty arguments. In the case of SBF and fund manager Anthony Scaramucci, their troubles came down to the oldest reason in the book: money. In early September, FTX agreed to buy 30% of SkyBridge Capital for $45 million as SkyBridge’s fund struggled during crypto winter. But Scaramucci’s white knight turned out to be a dark force: that 30% stake has now been seized in a messy bankruptcy proceeding.

At the first reports of FTX’s unraveling last week, Scaramucci rushed down to the Bahamas to offer SBF assistance, he told CNBC, but says he found the situation in FTX’s headquarters “distressing.” “When I got to the Bahamas, it became clear, at least from some of the people that worked on the legal team and the compliance team that perhaps there was more going on than it being a rescue situation,” he said. He described SBF’s mood as “contrite” as Scaramucci tried to gauge how dire the situation was. As for FTX’s team, Scaramucci said many seemed to also be searching for answers: “I think there was another group of people that were perhaps outside the inner circle that had had a level of shock on their faces in terms of what of what they saw,” he explained.

But the backstory of how Scaramucci and SBF got into business together in the first place is fascinating case study because it opens a window into the flow of money and high-level introductions that powered not only FTX’s growth, but the growth of countless other funds, charities and organizations that rode the coattails of the charismatic, rumpled then-billionaire Bankman-Fried.

Many know Scaramucci best for his notorious 11 day stint as the Trump Administration’s communications director in 2017. Yet prior to his brief foray into politics, Scaramucci spent decades on Wall Street, working at Goldman Sachs and Lehman Brothers in investment banking and equities before founding alternative asset hedge fund SkyBridge Capital in 2005. The firm was originally created as an alternative asset management fund that invested primarily in other hedge funds. “These investment strategies allow Investment Managers the flexibility to use leveraged or short-sale positions to take advantage of perceived inefficiencies across the global capital markets and are referred to as “alternative” strategies in contrast to the long-only, limited-leverage investment programs of conventional registered investment companies such as mutual funds,” according to a 2020 prospectus describing SkyBridge’s investment strategy.

Scaramucci explained that he first became interested in cryptocurrency during his time at the White House and heard Treasury officials discussing digitization of money. “When I got fired from the White House, returned to SkyBridge, I bought the URL SkyBridgeBitcoin.com,” he said in an interview with Bloomberg in the spring 2022. Yet his fund didn’t begin to officially shift towards digital asset investment until the pandemic, when Scaramucci decided to restructure his firm’s investments. “There’s a pre-pandemic world and a post-pandemic world, and a post-pandemic world has a lot more government deficits—it has a lot more uncertainty related to growth,” he said. SkyBridge first invested $270 million in Bitcoin in late 2020, and in 2022 began transitioning the majority its assets under management to digital assets.

SBF was integral to Scaramucci’s pivot, and he affirmed Scaramucci’s belief that the sector would see huge growth comparable to the internet in the 1990s. Scaramucci told the audience on the Nov. 15 event that he met SBF through a mutual friend, but his first business dealing with SBF was during SBF’s acquisitions of crypto exchange LedgerX in October 2021, a company that Scaramucci said he was a seed investor in. Scaramucci said that the relationship they built during the LedgerX acquisition led to an agreement in which SBF became the lead sponsor of Scaramucci’s SkyBridge Alternatives Conference (SALT) for three years, including a conference located at FTX Headquarters in the Bahamas. In April, SBF took the stage at the SALT Crypto Bahamas conference with socialite fixer Lauren Remington Platt and Gisele Bündchen to unveil an ad campaign for FTX featuring SBF and Bündchen.

As the crypto winter continued into the spring of 2022, Scaramucci may have started to see the wisdom in adding a deep-pocketed partner. According to news site Puck, Scaramucci denies that Skybridge was desperate for SBF’s investment—yet amid falling crypto prices SkyBridge was receiving redemption requests from the firm’s flagship fund and investors were reportedly seeking to withdraw as much as $890 million in July. Scaramucci didn’t return requests for comment.

The pair reportedly had lunch in the Bahamas (where FTX’s headquarters are located) this August when Scaramucci stopped by during a four-day Disney cruise, according to Puck. On the agenda? SkyBridge Capital’s move into crypto and FTX’s move into trading equities.

The final touches of the deal were worked out after the August lunch, and on September 7, 2022, FTX Ventures, through a shell company called Island Bay Ventures according to SEC filings, made a $45 million purchase of the 30% stake in Scaramucci’s SkyBridge. “He wired us the money, he did ask me to put $10 million of the proceeds into the FTT token, which I thought was in the spirit of the comity of the partnership. I didn’t think that was a big deal at the time,” Scaramucci said at the Nov. 15 event.

The sale of the SkyBridge stake was touted as a success in September, with Scaramucci promising the firm was in far better financial shape thanks to FTX’s investment. As part of the deal, SBF would have in three years bought another 55% of SkyBridge, which would have made him the majority owner of the firm.

Ironically, Scaramucci thinks that FTX’s implosion may have been triggered by conversations had during the fundraising trip across the Middle East that Scaramucci took SBF on in early November. Scaramucci told the audience at the Nov. 15 event that in meetings with potential investors, SBF made unflattering comments about Binance founder CZ that apparently got back to him, which started their Twitter argument that eventually devolved into FTX’s implosion. “Weirdly, the association with us and the trips at the Middle East, sort of tipped the first domino a lot earlier,” Scaramucci said.

Now, Scaramucci says that SkyBridge does not have assets in FTX and that the SkyBridge stake cannot be transferred to another entity even in liquidation. “The good news for SkyBridge investors, we had no assets there,” Scaramucci said to CNBC on Friday. “We thought that was a potential conflict of interest, so we were saved that way.”

According to filings with the SEC, SkyBridge has had what appears to be a small special purpose vehicle to invest in FTX. However, according to filings the investment was only $2 million. “Certain vehicles seek direct or indirect exposure to individual private companies,” the firm’s September 2022 disclosure brochure explains. According to the brochure, each ‘SkyBridge Venture fund’ is a privately placed Delaware limited partnership managed by SkyBridge.

So what will happen to the 30% stake in SkyBridge? Scaramucci said he thinks he can cut a deal to buy back the stake during the bankruptcy proceedings because he is the majority owner of SkyBridge. “The good news for me, maybe it’s a product of having good lawyers, is that the piece that Sam owns can’t be transferred to anybody without my permission, including in a liquidation event,” Scaramucci said at the Nov. 15 event.

“I was doing a lot of due diligence on [SBF], but clearly not enough,” he added.