‘Once-in-a-lifetime opportunity’: How a mass lockdown at the world’s biggest iPhone factory is India’s big chance to beat out China as Apple’s favorite supplier 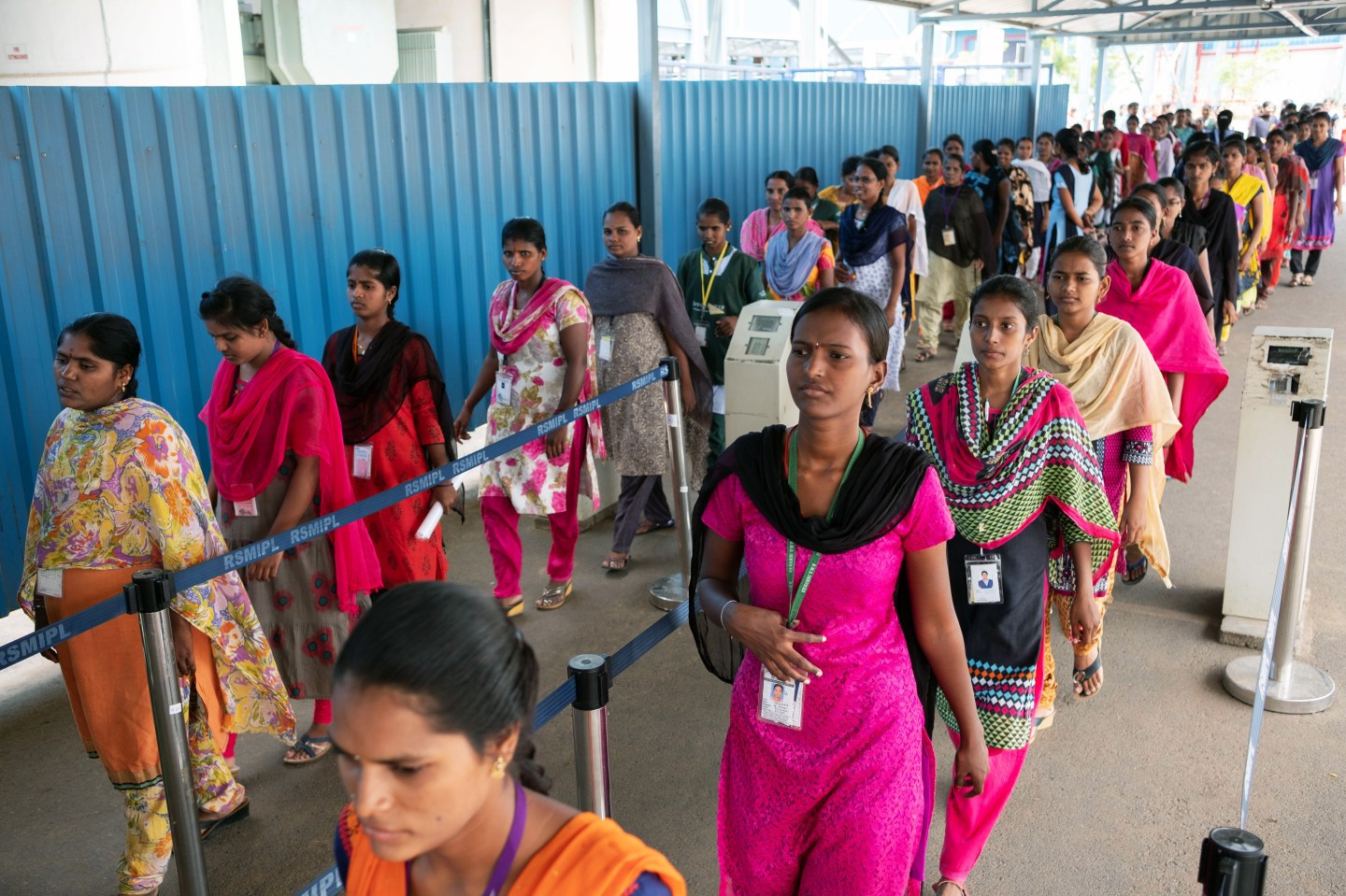 Employees, who have arrived by bus for the afternoon shift, check in at the mobile phone plant of Rising Stars Mobile India, a unit of Foxconn Technology, in Sri City, India, July 11, 2019.
Karen Dias—Bloomberg/Getty Images

Late last month, videos began circulating on the internet that showed thousands of people hauling suitcases along the city streets and highways of Zhengzhou, China.

They were workers from Foxconn Technology Group—the world’s biggest electronics manufacturer—who were fleeing the company compound. Some scaled barbed-wire fences to escape; others walked 25 miles to get home.

A few days after the mass exodus, China locked down the industrial park where Foxconn’s Zhengzhou facilities are located, known as “iPhone City.” That further isolated the facilities’ 200,000 workers, who were previously asked to work within a “closed loop” system because of a COVID outbreak, in which they sleep, live, and work within a designated area isolated from the outside world. The closed loop system left Foxconn’s workers exposed to the virus and lacking basic necessities, which drove them to flee.

This isn’t the first lockdown at a Foxconn factory. Foxconn facilities across China suffered production hits several times this year owing to government-enforced lockdowns and closed-loop systems. As a result of the recent disruptions in Zhengzhou, including both the lockdown itself and earlier worker escapes, production at Apple’s favorite iPhone factory has slipped to “significantly reduced capacity,” the Cupertino-based company acknowledged in a note last week.

For nearly three years, companies like Apple have operated with the uncertainty of not knowing when and where the next lockdown will strike—and for how long—owing to Beijing’s strict zero-COVID playbook, underscoring the risks of being overdependent on Chinese factories.

Those lockdown uncertainties, combined with growing Sino-U.S. trade tensions, has led Apple to accelerate its search for new manufacturing hubs. And India has emerged as one clear winner, with some analysts betting that the world’s third-largest economy is on a fast track to becoming one of Apple’s favored suppliers.

Beijing’s dogged pursuit of zero-COVID has locked people in shopping malls and office buildings, on factory floors, and even in Disneyland. China’s virus containment measures, some of the harshest in the world, have fueled anxiety, depression, and psychological trauma.

For global businesses operating in China, the government’s virus containment strategy has translated into major production and sales disruptions.

Shanghai’s grueling 60-day spring lockdown prompted Starbucks’ China sales to plunge 40% in that quarter; Tesla delivered 18% fewer cars in the same period, compared with the previous quarter. Over the spring and summer, Apple lost $4 billion in anticipated iPad and Mac sales alone. As a result of China’s virus containment measures—which show no end in sight—business sentiment has tanked. Only 55% of companies surveyed by Shanghai’s American Chamber of Commerce in October said they were optimistic about their five-year business outlook in China. It was the lowest reading in the survey’s 23-year history.

China’s adherence to zero-COVID, alongside growing Sino-U.S. trade tensions, has made it increasingly difficult for businesses to “solely rely on Chinese suppliers for product,” Patrick Penfield, professor of supply-chain practice at Syracuse University, told Fortune.

“Many multinationals in China are struggling to maintain production, receive supplies, and meet demand,” he said.

The consequences of China’s zero-COVID policy is an “absolute gut punch for Apple in its most important holiday quarter,” Dan Ives, managing director at investment firm Wedbush Securities, tweeted last week. “We estimate this negatively impacting roughly 3% of iPhone sales this quarter based on…China production [and] supply issues. The albatross continues in China,” he said.

Zhengzhou is a crucial site for Apple’s iPhone production, particularly its newest models. iPhone production could slow as much as 30% because of the recent events—unwelcome news for the electronics giant ahead of the holiday season. Apple said on Sunday that it will make fewer iPhones and shipments will be delayed. Unpredictability in Chinese supply chains has created glaring uncertainties for firms like Apple that “rely on a stable supply of goods from China,” Chris Tang, distinguished professor in business administration at UCLA, told Fortune.

“For this reason, Apple now has no choice [but] to diversify its supply base.”

And that base, he added, is moving to emerging markets like India and Southeast Asian countries.

In recent years, India has courted multinationals with the goal of becoming the world’s top electronics and smartphone manufacturing hub. In June 2020, it announced a $6.6 billion incentive scheme to attract global firms to produce their electronics in India.

The Modi government has recognized the current moment as a “once-in-a-lifetime opportunity” to sway global companies as China’s zero-COVID strategy rattles their supply chains, Mukesh Aghi, president and CEO at business advocacy group U.S.-India Strategic Partnership Forum, told Fortune. “India has limited time—and [Narendra Modi] realizes that. The government is fast-tracking policies that will give India an advantage as companies increasingly diversify their supply chains,” he said.

India’s strong state support for smartphone manufacturing, coupled with its large labor force of skilled and young professionals, is incentivizing the world’s mobile-phone makers to ramp up production in the country, Tarun Pathak, research director at smartphone-focused consultancy Counterpoint Research, told Fortune. And one key selling point that differentiates India from other emerging markets is its vast market size.

“Foxconn moving production to India from China is also about getting closer to a high-growth market, rather than, say, following U.S. policy signaling to contain China,” Terry said. Apple also wants to dominate India’s fast-growing high-end smartphone market, which is expected to hit 10% next year from 7%, Pathak said.

In September of this year, Apple began manufacturing iPhone 14s at a factory outside the city of Chennai—the first time ever that the Cupertino-based company has based production of its newest smartphones in India, marking a major shift in its manufacturing strategy.

After the latest Zhengzhou lockdown, Apple asked a second supplier—Taiwan’s Pegatron—to start cranking out its latest iPhone model in Tamil Nadu, according to a Bloomberg report. Foxconn now plans to quadruple its India workforce in the next two years to 70,000, says a Reuters report.

Analysts now expect a bigger and quicker-than-expected iPhone production shift to India. In September, JPMorgan analysts predicted that India could produce 5% of Apple’s iPhone 14 inventory and 25% in three years. Ming-Chi Kuo, an Apple-focused tech analyst at Hong Kong–based TF International Securities, said last week that the Zhengzhou lockdown prompted Foxconn and Apple to accelerate iPhone production in India. Kuo expects iPhones made in India—still by Foxconn—to grow by at least 150% next year.

“Foxconn’s medium- to long-term goal is to ship 40% to 45% of iPhones from India, versus the current 2% to 4%, meaning Foxconn’s iPhone production capacity in India will increase rapidly in the next few years,” Kuo suggests.

Pathak believes that Apple “can scale in India” with iPhone production in the country likely to double next year. But he argues that India contributing half of all iPhone assembly worldwide is an “ambitious” goal owing to China’s still-outsize role in the iPhone supply chain and stiff competition from other emerging markets.

Still, India needs to build out the infrastructure and talent that these companies need. China still offers efficient and high-value manufacturing networks that Apple—and other multinationals—will find difficult to replace in India, Paul Hong, distinguished professor of global supply-chain management at the University of Toledo, told Fortune. India imports the bulk of iPhone components from China. “For Apple, completely decoupling from China [is] not realistic in the short run,” Hong said. Rather, companies are now pursuing a “China plus one” strategy that sees them retaining operations in China, but diversifying supply chains to India and competing economies like Vietnam and Mexico, Bagla said.

The Chinese authorities have now lifted the lockdown in Zhengzhou, but the Foxconn compound remains under a strict closed-loop system, with company and government officials providing no indication of when it will end.

And India will continue in its mission to take advantage of China’s zero-COVID pain, Aghi argues.

“India is only getting started.”