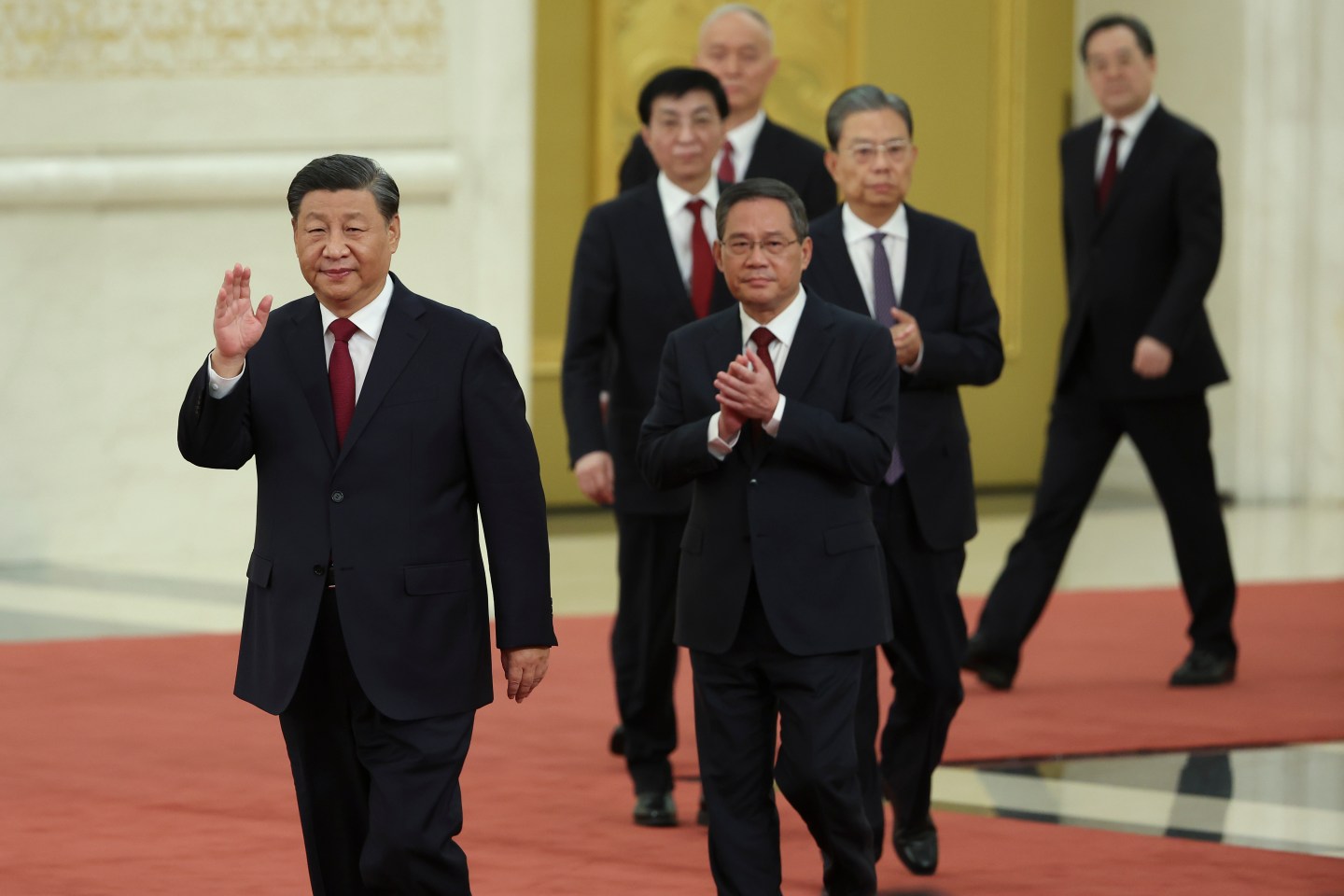 China’s top leaders reinforced the need to stick with the contentious Covid Zero policy, while urging officials to be more targeted with their restrictions so as to avoid damage to the economy.

In a meeting of the new Politburo Standing Committee chaired by President Xi Jinping, the members — appointed to the supreme leadership body at last month’s Communist Party congress — called for “more decisive” measures to curb the spread of the virus so as to resume normal life and production as soon as possible, according to the Xinhua News Agency. The Covid situation “remains severe” as cases keep emerging, they said.

While it’s not the first time Xi and senior leaders in China have urged cadres to be mindful of the economy in their containment measures, it’s the first public comments on the virus by the new Standing Committee. Investors have been watching for clues as to the outlook for Covid Zero, which is dragging on the world’s second-largest economy with its ongoing reliance on lockdowns, mass testing and border restrictions.

The statement could further damp speculation around a potential Covid Zero exit, however, with unverified rumors of plans to ease the tough regime fueling a huge rally for the nation’s financial markets last week.

“I think Chinese stocks and CNY will rise following the news that senior leaders in Beijing had a discussion on the Covid-fighting measures, ” said Hong Hao, a prominent Hong Kong-based economist at GROW Investment Group. “The fact itself shows that the very top is considering an exit from Covid Zero and that warrants being bullish.”

While there are some signs Beijing may be looking into how it may approach easing border curbs, the situation internally is yet to really shift. Restrictions such as district lockdowns and school suspensions were imposed this week in some of the nation’s biggest cities, as Beijing, Guangzhou and Chongqing confronted their worst outbreaks in at least several months.

“It shows China will eventually reopen as no one benefits from the current policy and the economic pressure is kicking in, especially as the fiscal cost is increasingly high with the new virus variants,” said Gary Ng, senior economist at Natixis SA. “Even though the policy jargon of ‘dynamic zero-Covid’ is here to stay, there is room to maneuver for economic growth.”

“There is no question that China will reopen eventually, and the unknown part is the pace,” he said. “The progress is likely to be cautious with a piecemeal approach.”

The top leaders urged greater efforts to “optimize” control measures and use more precise measures in Covid tests, vaccine shots and the transfer of patients. They also called for more efforts to speed up research of vaccines and improve their effectiveness.

“Influenced by virus mutation and winter and spring climate factors, the scope of the spread and scale of the epidemic are likely to further expand,” Xinhua cited the Standing Committee as saying. “The situation of prevention and control is still serious. We must maintain strategic determination and do a good job in prevention and control of the epidemic scientifically and accurately.”

“It’s clear that policymakers realize the heavy tolls from zero-Covid on the economy,” wrote Larry Hu, head of China economics at Macquarie Group Ltd. in a report. “That said, they could not abruptly declare the end of zero-Covid, given they have invested so much political capital in it. Moreover, they have to buy more time for a shift in propaganda.”

Macquarie expects China to use the next 6-9 months as the transition period for a potential reopening, according to the economists.

Southern manufacturing powerhouse Guangzhou seems to already be trying to walk the fine line between deploying more targeted restrictions, while still reining in a growing outbreak. Despite surging cases, the city has only locked down three of its 11 districts, and held off for some days before suspending in-person classes for most schools in the city.

Whether the approach will be successful remains to be seen, with eliminating the more contagious omicron a tougher task than with the original virus. The roots of Covid Zero lie in China’s successful containment of the first coronavirus outbreak in Wuhan. After wiping out cases there in early 2020, the country went for a long period without any recorded infections.

Xi touts China’s very low death toll as proof of Covid Zero’s rectitude, saying the “herd immunity” approach of the West would lead to devastation in a country of China’s size. Less effective vaccines and an under-inoculated elderly population provide barriers to China opening up without a marked increase in fatalities, putting Xi and his new leadership cabal in a quandary.

Most experts don’t see China moving away from Covid Zero before next spring, at the earliest.