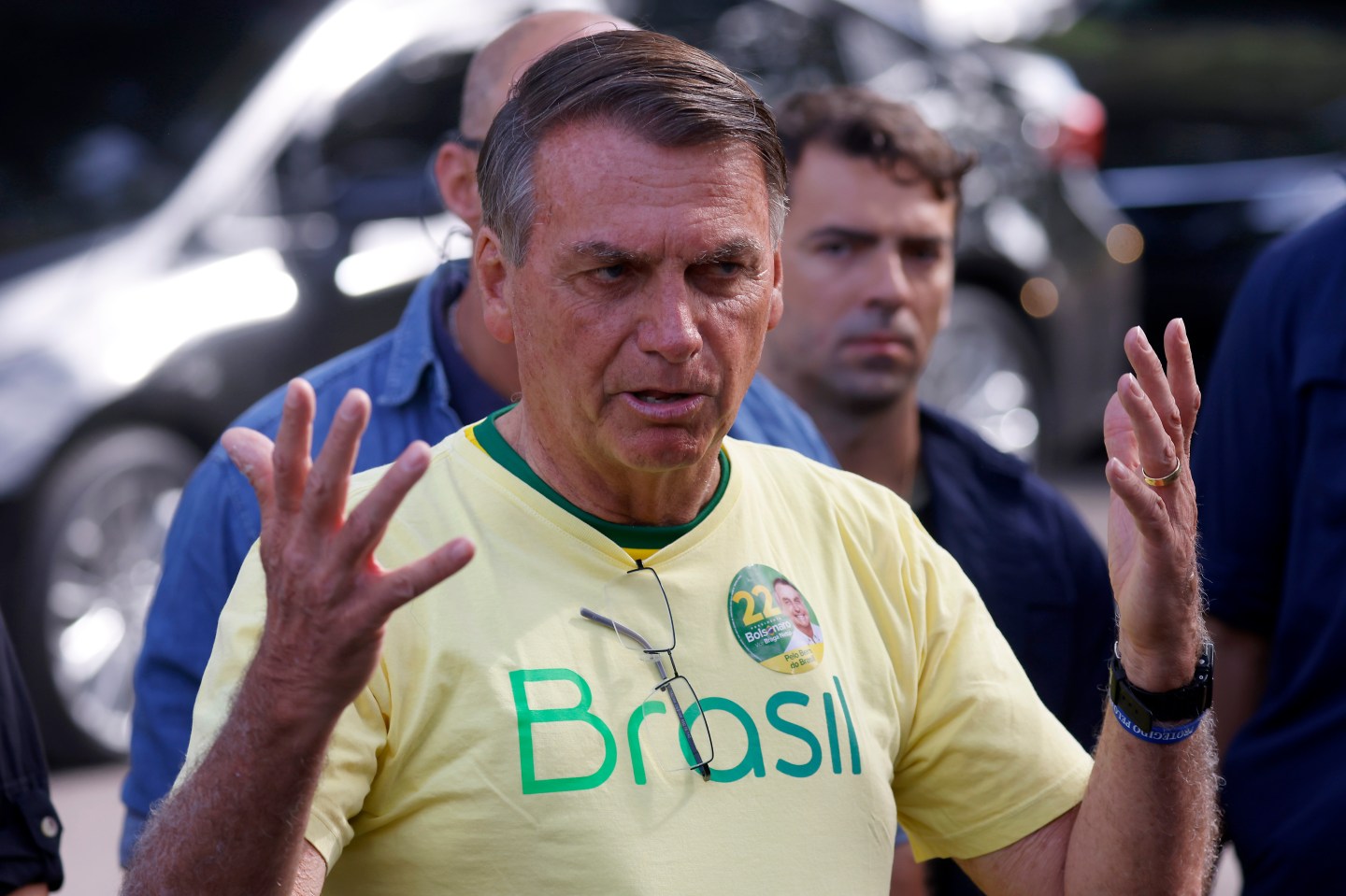 Incumbent Jair Bolsonaro of Liberal Party (PL), who is running for another term, talks to press as he leaves Vila Militar after casting his vote on October 30, 2022 in Rio de Janeiro, Brazil.
Wagner Meier/Getty Images

Nearly 24 hours after his defeat in Brazil’s runoff election, President Jair Bolsonaro has yet to be seen or heard from, keeping voters guessing on whether he will concede defeat to his old foe Luiz Inacio Lula da Silva.

Bolsonaro didn’t make any public comments Sunday night after Brazil’s electoral court said he lost the election to Lula by less than two percentage points, the smallest margin for a presidential election in the country’s modern history. Local press reported that the president went to sleep past 10 p.m. and on Monday morning was taken via motorcade from the official residence to the government palace in Brasilia.

Speculation is growing in Brazil’s capital about the president’s next moves and television networks have arranged cameras around different government buildings in case Bolsonaro decides to break his silence. The president in recent hours has met with his Chief of Staff Ciro Nogueira and some other ministers and advisers as well as his oldest son, Senator Flavio Bolsonaro.

In a tweet on Monday afternoon, Flavio Bolsonaro thanked his father’s supporters and said they wouldn’t give up on Brazil, without specifically referring to the outcome.

While his decision to not immediately recognize the result isn’t a complete surprise given his long history of attacks against Brazil’s electoral system, it’s hardly a sign that the institutional framework of the country is about to be derailed. The heads of the country’s senate and lower house quickly accepted the election results on Sunday night along with the supreme court justices and some of Bolsonaro’s closest allies.

“He’s going to keep working normally through the end of his mandate,” said Tarcisio de Freitas, a former infrastructure minister under Bolsonaro who was elected governor of Sao Paulo state.

Yet the president’s silence can hurt the transition process. By law, Brazil’s government needs to organize a formal handover process right after the vote, with the president-elect allowed to nominate 50 people to meet officials and exchange government information. The outgoing administration typically coordinates with the team of the next president during the following two months so there is a smooth transition when the new government takes over Jan. 1.

If Bolsonaro decides not to accept the results, it would halt “the traditional government transition process that starts right after the election,” Rio de Janeiro-based political analyst Thomas Traumann wrote in a note Monday. “Bolsonaro will use the next two months to handicap Lula’s administration from the beginning.”

Meanwhile, Brazilian assets have largely shrugged off initial concerns, with stocks of companies expected to benefit from Lula’s presidency rallying on Monday after the election while the real reversed earlier losses to post the biggest gain among the world’s major currencies.

Pro-Bolsonaro truck drivers have blocked some highways in about a dozen states in protest of Lula’s election win, according to local media.

While a strategy to try to discredit the election “is unlikely to yield a favorable result for Bolsonaro, that can be a tactic to keep his base mobilized to oppose a Lula administration,” Eurasia Group analysts wrote in a report.