‘I’m an additional paid family member’: The life of a 27-year-old house manager who makes $45K a year 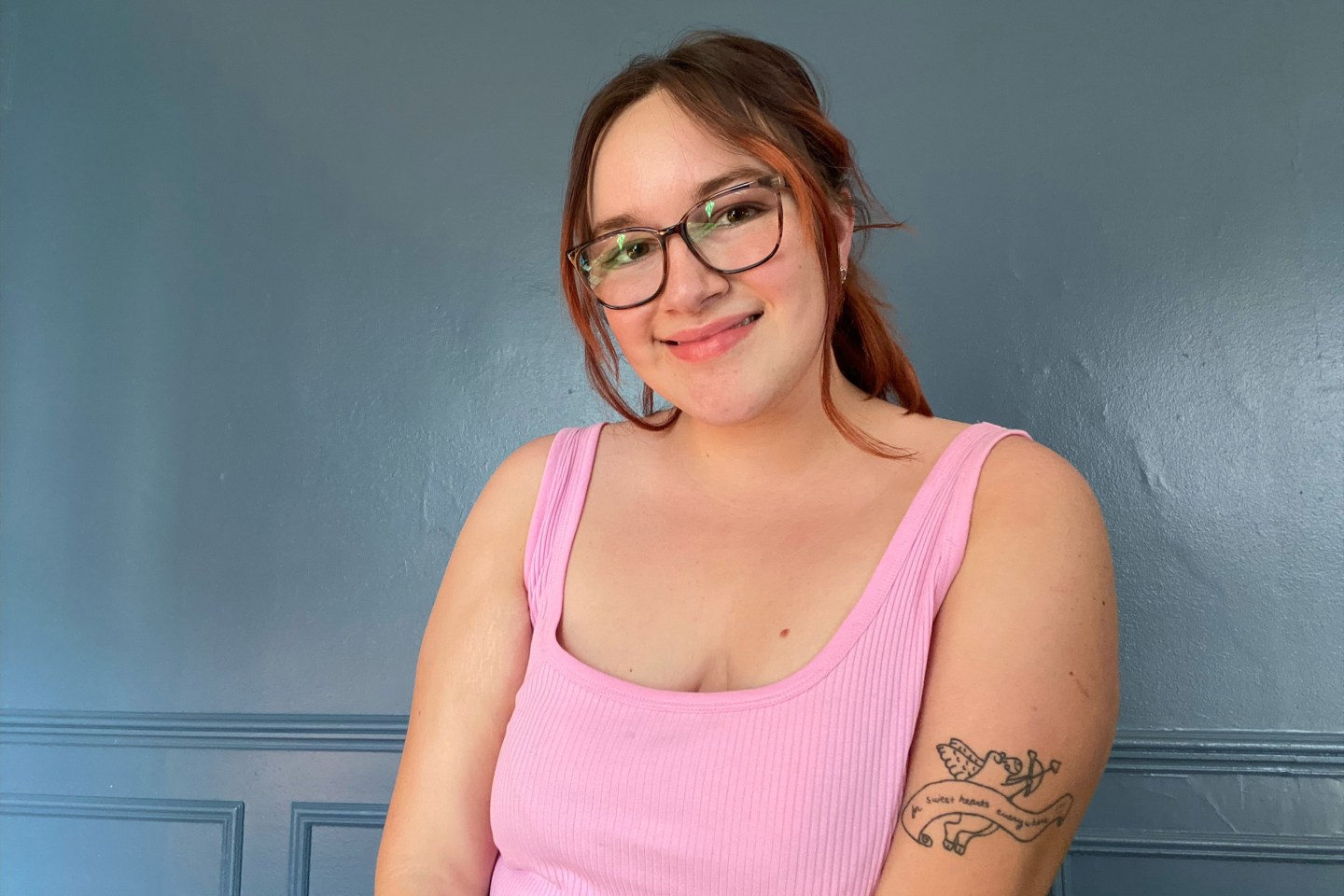 Tessa Reed wakes up before sunrise on weekdays, long before most people even hit the snooze button for the first time. She leaves the one-bedroom apartment she shares with her boyfriend and their cat, and drives roughly two miles from Midtown Kansas City, Mo., to a five-bedroom house in the more affluent South Plaza neighborhood. Forget a nine-to-five; she arrives at her job before 6 a.m.

The house is, for all intents and purposes, her second home. It’s also kind of her office. Reed, 27, is a house manager, though she half jokingly refers to herself as an estate manager because of the breadth of her responsibilities. She, along with a small support staff, cooks, cleans, books appointments, handles home repairs, and manages the lives of a family of four that includes two small children and their parents, both doctors with very demanding schedules.

Before anyone in the house is up, Reed has let herself in, packed lunches, puttered around getting everything in order, and double-checked schedules for the day. Then it’s time to wake the kids, 5 and 7, for school before starting her routine of making sure everyone’s day runs like clockwork. Well, to the extent that it’s in her control—and she controls quite a lot.

“I’m an additional paid family member,” Reed says. She thinks of herself as a third parent, collaborating with her bosses on almost everything related to their home and family, so they can focus on their careers.

There’s an age-old question: Is it possible to have it all? And what are you willing to sacrifice? Is it possible for anyone to balance family life with a high-powered career? It’s no secret this is often not a problem for men in positions of power, while women are too frequently forced to choose between the two. But those who manage to reach the top know the truth: Nobody gets to have it all without a lot of paid help. That’s where Reed comes in.

Reed has worked as a house manager, if not entirely in title, for eight years. She started as a nanny for kids in the foster home of a family friend. After a while, she realized the kids were thriving on their schedules and didn’t really need all of her attention, so she threw herself into other aspects of maintaining the home.

“I had to learn on the job what it takes to run a household and how to anticipate the needs for a family, how to cook and grocery shop and budget and make a schedule and follow through with multitasking,” says Reed.

After three years learning what it takes to be a full-time house manager, she was ready for a change. Reed’s sister, a physician in Kansas City, dropped her info in a local Facebook group for doctors and medical professionals. Demand was high.

She interviewed with six families over the phone. The process required her to be deliberate.

“This is such a personal job. It probably took me about a month, a month and a half, to figure out which family I wanted to go with,” Reed says. She talked with families about parenting styles, schedules, religious background, and their expectations for the role.

It was important for Reed to understand the delineation of tasks—which responsibilities she owned, and where she could collaborate with the parents. She wanted to be on the same page but avoid micromanaging. She was looking for trust.

“I was mostly just trying to find a family that had parents who weren’t high-strung,” Reed says. “Parents who were able to release tasks to me and trust me. That also comes with time. It took a while for my boss to fully trust me with as much as they do now.”

The family she’s working with now is the only family she decided to meet with in person during her job search.

A paid member of the family

Both of her bosses work long hours, sometimes around the clock. Once, the mother worked 14 consecutive overnight shifts at the hospital. Reed is there for the kids in the morning and often at night. She cares for them like they were her own, she says. She’s been with them most of their lives.

“I love those kids like they’re my own,” Reed says. “I’m another trusted adult in their lives. I think they’re very fortunate to have a good team of people around them that love them.”

Once the kids are at school, Reed’s day turns into the busy errand- and task-filled mundanity most people might see as burdensome. Every day is a little different as she sketches out time to grocery shop, take cars to be serviced, field emails from teachers, and handle home repairs. There’s always something else to learn, she says. Most of the household stuff she’s had to Google at one point or another. The house has flooded three times—and she swears the garage door is always broken.

“I kind of feel like a garage door mechanic now. I can tinker around and fix lots of stuff,” she says. “But 24/7 repair people have saved the day too many times to count.”

When she first started, Reed was supporting the mother and her two kids, while the father was completing a fellowship more than an 11-hour drive away. They were in a two-bedroom apartment in the Union Hill neighborhood in Kansas City. It was during that time that Reed established a close relationship with the family, living with them at least once a month as the mother juggled an intense work schedule.

As her bosses’ careers have taken off and the children have grown up, Reed has taken on more responsibility.

Reed earns roughly $45,000 a year as the family’s house manager. Her bosses also provide her with a car—a necessity for ushering kids to and from school, speech therapy, doctor appointments, piano lessons, and karate—car insurance, and private health insurance. As an added bonus, Reed says, since she’s cooking the meals and buying the groceries, she’s often eating for free too.

Her employers gave her a credit card that she uses mostly for groceries or to pay for after-school classes and activities.

“I love decorating the house for holidays and helping host parties,” she says. “I am really involved in the enrichment for the family. I’m passionate about that.”

She makes her own schedule for the most part, as long as she’s back to pick up the kids from school, shuttle them around to their extracurriculars, and be there to make dinner and do the nightly bedtime routines. As much as her bosses work and the nature of their jobs require her to be flexible and available if there’s a sick kid, a day off, or any number of eventualities.

For the first three years with the family, Reed was doing everything herself: cooking, cleaning, laundry, caring for the kids, household tasks—everything.

“It was very hard when the pandemic came, and the kids were doing school online at home. I was there all day, and there just was not enough time to do anything,” she says. “I definitely had to request more help. I was drowning in too much stuff to do.”

Since then, the couple have hired additional house cleaners who come once a week, and Reed also has a partner who comes a few times a week to help with tasks like laundry and keeping the house in order. The family also has a live-in au pair from France who also helps with childcare.

“It’s great having a team there to collaborate with, or just having the possibility to take a sick day without the whole family structure breaking down,” Reed says.

The family is looking to move into a new home soon. It’s bigger and has some of the features they’ve been wanting to install in their current house. There’s even three working garage doors. The top floor has multiple bedrooms, bathrooms, and an additional kitchen that will serve as an apartment for the au pairs.

It’s a bigger estate, Reed says, and it will be “a whole new ball game.” She’ll have to add “hiring and managing a landscaper” to her to-do list.

Moves like this one and changes to the scope of Reed’s responsibilities are recorded and evaluated every year. She and her bosses do an audit of the house operations and what it takes to keep the family and home humming along. They look into what’s working, what’s not, what needs to change, and she makes sure to always ask for a cost-of-living raise.

There’s no tension in these conversations, Reed says. She’s become an integral part of their lives. She considers them friends.

“We enjoy spending time together,” she says. “Does that mean I go to their house on the weekends? No. But will I invite them to a Halloween party? Yeah.”

The relationship far exceeds the bounds of the kind of friendship it’s become. In each other they have found not only valuable collaboration and trust but also a sense of family. She also recognizes the value she brings to their lives.

“It’s very hard for people to find consistent childcare, let alone household care, that is up to a high standard with lots of transparency,” she continues. “It’s a lot of responsibility to have someone work in your house, and to work with your kids…I really envision myself living life and being involved with their family for a long time whether it’s working with them or not. They don’t have any family in town, so this is our family. They feel like my second family.”