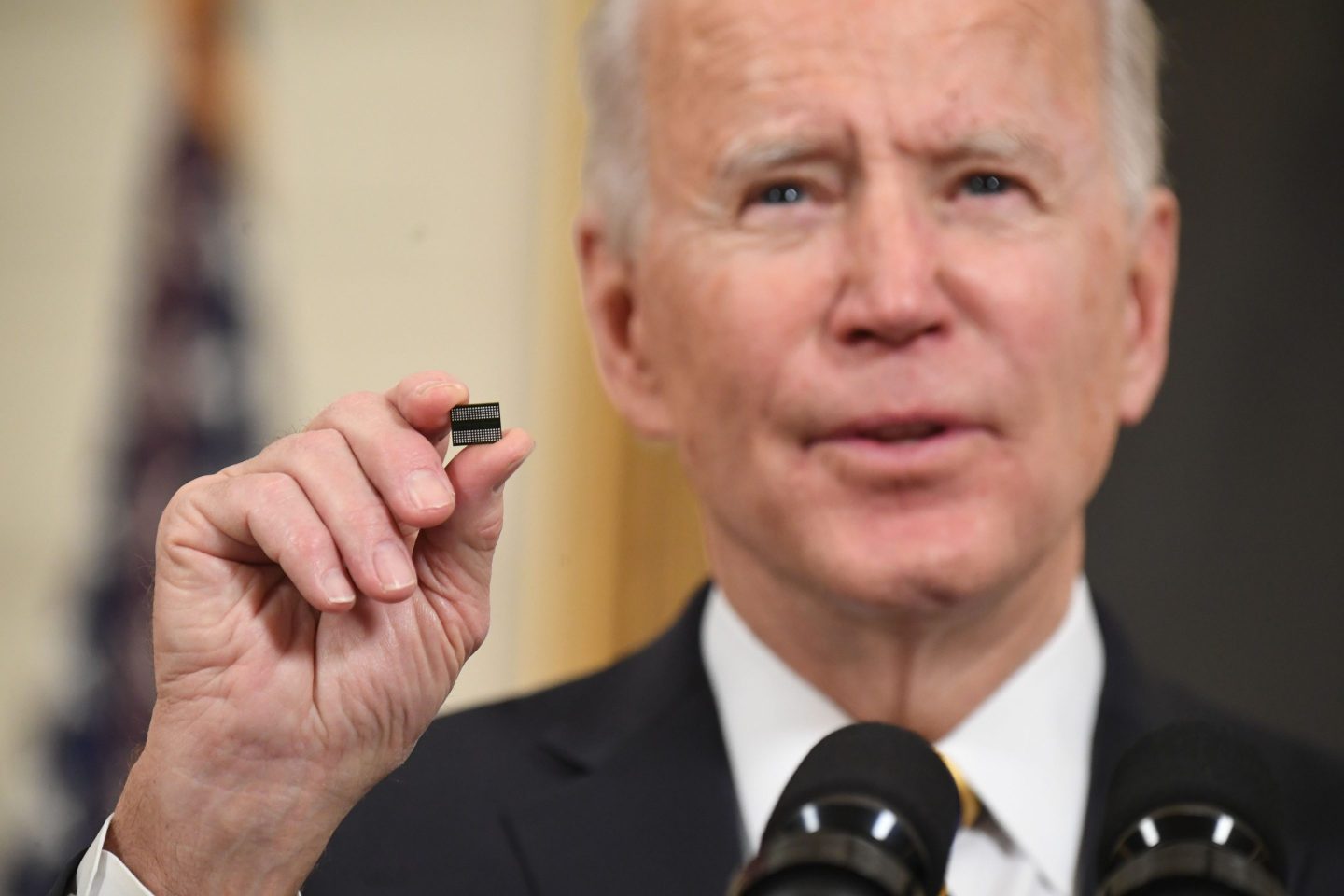 President Joe Biden holds a microchip as he speaks before signing an executive order on securing critical supply chains in Feb. 2021. The Biden administration has since taken several steps to encourage chipmakers to move production back to the U.S.
Saul Loeb–AFP/Getty Images

Can we mitigate our overreliance on Asia when it comes to the microprocessors used in everything from appliances in our homes to the laptops we use and the cars we drive?

In early September, The Department of Commerce unveiled its implementation plan for dispersing $50 billion from the CHIPS Act for subsidies to build chip plants in the U.S. and support U.S. chip research and development. Just this month, new restrictions were placed on China’s ability to purchase and manufacture certain high-end chips used in military applications. The export controls also impact U.S. companies exporting any semiconductor manufacturing equipment to China.

Already, companies are announcing investments to lessen U.S. reliance on Asia for semiconductors. Intel Corp. plans to spend $20 billion on a new fabrication plant in New Albany, Ohio, which is expected to be operational by 2025 and one of the world’s largest silicon-manufacturing sites. Taiwan Semiconductor (TSMC) and Samsung (which already announced plans for a $17 billion chip plant in Texas to open in 2024) are also committed to bringing chip manufacturing back to U.S. shores.

At the same time, artificial intelligence (A.I.) and machine learning (M.L.) investment in the semiconductor industry is surging to increase efficiencies in ways we never imagined. In today’s era of extreme automation, A.I., along with digital twin technology, has the capacity to speed up the chip design and manufacturing process and, in turn, help us more quickly bridge the gap between demand and supply.

Digital twins–virtual representations that serve as real-time digital counterparts of physical objects or processes–have greatly evolved since their first practical application at NASA in 2010 to improve the physical model simulation of spacecraft.

Today’s digital twin technology allows chip makers to improve performance while operating at full capacity, without any disruption. Companies such as LAM Research, Bosch (which uses a digital twin in one of its German semiconductor factories), and Applied Materials (a leader in materials engineering solutions used to produce virtually every new chip and advanced display in the world) are already using surrogate machine learning models that are more accurate and up to a million times faster than traditional physics-based simulations.

Technology startups such as Tignis (one of our portfolio companies), AspenTech and Ansys are now pioneering advances, leveraging digital twins to optimize industrial operations and make A.I. and M.L. available to almost any application.

With A.I. ready to play a key role in process control and process modeling and available for use in any field of engineering simulation, there will be a massive opportunity for disruption in the manufacturing industry through the delivery of significant improvements in yield, quality, and throughput.

Still, while some chip manufacturers are already using digital twins to create development models, the technology has not been used widely to optimize production. This is surprising when you consider that by using data already available, digital twins have the capacity to help chip manufacturers better determine if production targets are adequate and, if not, what even a modest increase in production could mean.

By recreating what a physical system looks like in the cloud, manufacturers can identify key learnings and achieve an even greater increase in capacity–all without the risks associated with traditional methods.

With private and public funds at stake, digital twins could be a game-changer for chipmakers, manufacturers, and consumers.

Chris Rust is the founder and general partner of Clear Ventures.