Housing market activity is crashing—and it threatens to push the U.S. into recession just like it did in 1981 and 2008 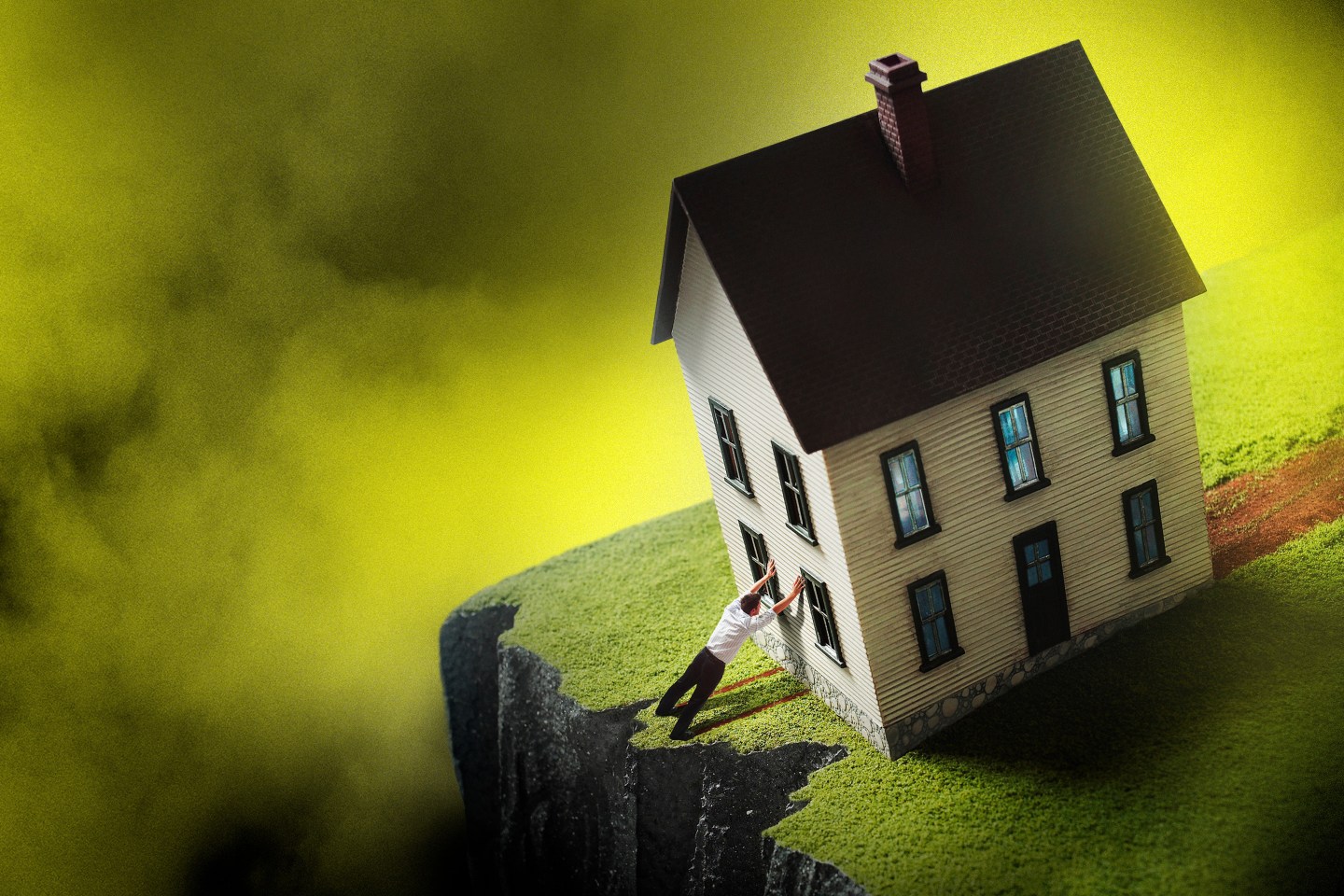 The go-to line this year from analysts and economists alike is that “the Fed will push until something breaks.” Increasingly, it’s looking like that “something” might be the weakening U.S. housing market.

“Las Vegas is one of the leading indicators for [home] price action in the housing market, like we saw in 2008 and the recent frenzy. We are absolutely feeling the heat here. The buyer pool has, for the most part, dried up,” Kristen Riffle, a real estate agent in Las Vegas, tells Fortune.

But it’s not just bubbly markets like Las Vegas and Boise that are feeling the pain: This housing downturn is picking up steam nationwide. In fact, as of last week, mortgage purchase applications are down 38% on a year-over-year basis. That marks the lowest reading since 2014.

Let's be clear, though: This "crash" in housing activity—or as Fed Chair Jerome Powell calls it a "difficult correction"—didn't appear out of thin air. It's by design. The Federal Reserve flipped into inflation-fighting mode this spring with hopes that elevated interest rates would cause activity to slump in rate-sensitive sectors like housing.

The Fed's reasoning for slowing the housing market boils down to two words: demand destruction. Historically speaking, mortgage rates spike as soon as central banks go into inflation-fighting mode. That mortgage rate shock causes sales for both existing and new homes to fall. As builders cut back, demand for both commodities (like lumber) and durable goods (like refrigerators) then declines. It also causes real estate and construction layoffs. Those economic contractions then quickly spread throughout the rest of the economy and, in theory, help to weaken the labor market and tame high inflation.

“The most frequent way we enter into recession is the Fed raises rates to fight inflation. The leading indicator for this type of recession is housing,” Bill McBride, author of the economics blog Calculated Risk, told Fortune this summer. “It [housing] is not the target, but it [housing] is essentially the target.”

Of course, we're already seeing these housing-spurred economic contractions. Homebuilders are cutting back. Real estate firms are trimming head counts. And some regional housing markets, like Boise and Seattle, have already slipped into a home price correction.

"Realtors are feeling it big-time, as well. I put in a call to the Greater Las Vegas Association of Realtors, and the employee I spoke with said that they were averaging about 300 new members every month. This month she had estimated 120; however, she has been processing about 30 realtor withdrawals a day," Riffle says. That means every day around 30 real estate agents in Las Vegas alone are calling it quits.

Now let's rewind back to the intro of this article. When analysts say "the Fed will push until something breaks," they're implying the Fed's inflation campaign is going to continue until either inflation abates or something pushes the economy into a recession. That "something" could be distress in the bond market, or perhaps liquidity issues at major financial firms. But there's also growing concern that the "something" could be the housing market.

There's nothing unusual about a housing downturn helping to trigger a recession. Look no further than economist Edward Leamer’s 2007 paper titled “Housing Is the Business Cycle.” Leamer found that 80% of post–World War II recessions came after a “substantial” housing slowdown.

But when analysts talk about housing being what "breaks," they're talking about a housing downturn not just helping to cause the recession but being the underlying cause. The most notorious historical examples of this are 1981 and 2008.

Back in the early 1980s, Fed Chair Paul Volcker famously tackled the inflationary run that had started in the ’70s. The central bank achieved its goal but only after spiking mortgage rates—which climbed to 18% in 1981—created a housing downturn so sharp that it drove the entire economy into recession. While home sales and building levels both cratered, home prices actually remained fairly stable throughout the 1981 housing downturn.

The 2008 housing crash, of course, was a different story. Unlike 1981, the 2000s housing downturn was brought on by a housing bubble. That slowdown started in 2005 after a series of Fed rate hikes. Over the subsequent years, it would escalate into a full-blown housing bust that brought on the Great Recession. Unlike 1981, the 2000s housing crash was underpinned by a perfect storm of rampant overbuilding, deteriorating household finances, historic levels of overvaluation, and toxic subprime mortgages.

A historic affordability shock. That's the best way to describe why the housing market might be the "something" that breaks.

The Pandemic Housing Boom—which saw U.S. home prices climb 43% in just over two years—coupled with 7% mortgage rates has simply pushed affordability beyond what many would-be borrowers can afford. Relative to incomes, it's actually more expensive to buy now than it was at the height of the housing bubble.

Anytime the Fed moves into inflation-fighting mode, mortgage rates will rise. However, the size of this mortgage rate spike—which has seen mortgage rates jump from 3% to 7% this year—has caught the industry off guard. Historically speaking, mortgage rates trade around 2 percentage points above the 10-year Treasury yield (which is currently trading at 4%). That spread is around 3 percentage points right now. The reason? As the Fed back off buying MBS securities, investors—who assumed 2022 mortgage borrowers will refinance in the future and thus reduce their returns—weren't eager to pick up the MBS securities.

This divergence between Treasury yields and mortgage rates has some industry insiders calling the "MBS market broken." Ironically, the broken "MBS market" has put the U.S. housing market at higher risk of also "breaking.''

There's no doubt about it: The housing market entered into a downturn back in the summer. That said, the economic contractions aren't yet at the level you'd expect to see before a Fed-induced recession.

Something stands in the way: homebuilding.

On one hand, single-family housing starts are down 18.5% on a year-over-year basis. On the other hand, homebuilders remain busy. A combination of supply-chain constraints and an eagerness to cash in on the Pandemic Housing Boom led homebuilders to massively ramp up production over the past two years. That backlog is so big, they are still working through it. And as long as builders and contractors remain busy, it will slow down the spike in construction job cuts that normally come before a Fed-induced recession.

If Wells Fargo's forecast—which also predicts a 5.5% decline in U.S. home prices in 2023—comes to fruition, it would mean that the housing market downturn reaches a level that historically occurs only during recession.

While the housing downturn appears to be on a trajectory that could push the U.S. economy into recession, nothing is certain. If inflation eases, the Fed could pivot policy before a recession becomes locked in. There's also the theory that a significant drop in residential investment—which makes up 4.6% of GDP—wouldn't be as impactful on today's less housing-dependent economy. While it's true that private investment topped out at a much higher share of GDP in 2005 (6.7%), we're actually slightly above the share seen in 1981 (4.4%). In other words, don't underestimate housing.

But "recession" or "no recession," the housing industry is clearly feeling the pinch of the tightening cycle. It's hard to see that changing anytime soon.

"I have literally nothing under contract. I'm a long-hauler, but I'd be lying if I said I wasn't nervous," Kira Mason, a real estate agent in Philadelphia, tells Fortune.