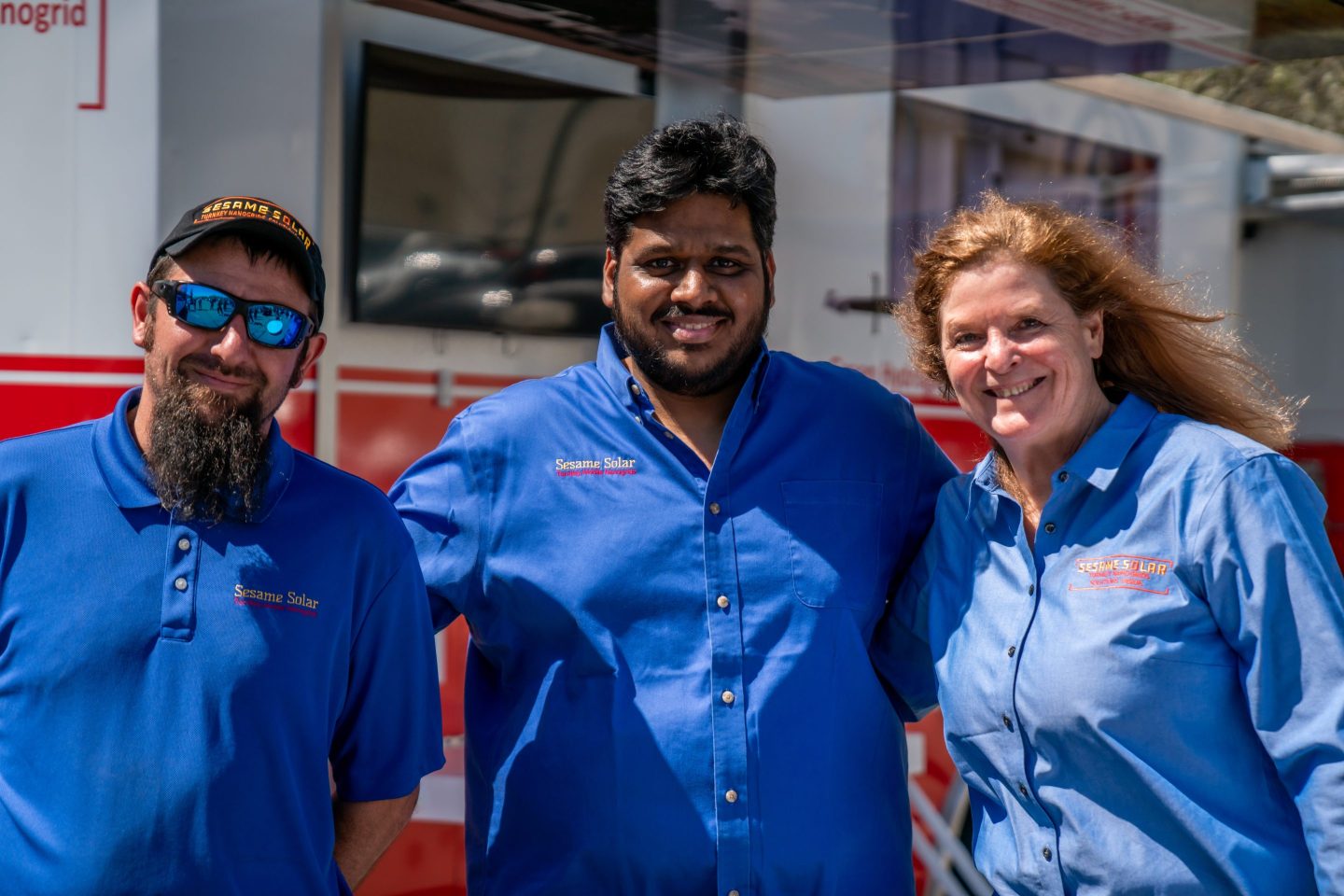 Lauren Flanagan had the epiphany while watching TV broadcasts of whole families sprawled on the floor of the New Orleans Superdome in August 2005 after losing everything in the flooding that followed Hurricane Katrina.

Flanagan, a technology entrepreneur and angel investor, was already putting money into startups that were trying to address climate change, but she wanted to find a better way to a deal with the increasing number of extreme weather events. She understood why FEMA’s first response to a natural disaster was to send in diesel generators. Victims and emergency personnel need power for housing, medical facilities, and communications. But it seemed silly to pump out greenhouse gases to address disasters arguably made worse by greenhouse gases.

“I realized we had to get better at responding to disasters and do it in a way that’s not compounding the problems and increasing climate change,” says Flanagan.

Fast-forward 17 years to the disaster recovery base camp set up after Hurricane Ian outside a Comcast building in Ft. Meyers, Fla. It looks like many others: two 60-foot tractor trailers full of toilets, showers, and laundry facilities, powered by two other trailers that housed offices, all in a parking lot surrounded by downed trees and power lines. But the usual hum of diesel generators didn’t accompany the 300 or so local residents and Comcast employees and contractors who used the facilities; instead, the base camp was powered by battery-stored solar energy.

Sesame Solar, the Jackson, Mich.–based company Flanagan launched five years ago with COO Namit Jhanwar and product manufacturing head Adam Kasefang, sells mobile solar- and green-hydrogen-powered nanogrids—the first mobile, renewable systems of their kind that can be mounted on an RV chassis or inside shipping containers. Since deploying its first two nanogrids to provide power after Hurricane Maria in 2017, Sesame Solar, which Flanagan says is profitable, has raised $2 million in funding and sold more the 50 nanogrids for between $100,000 and $300,000 each, to government and corporate clients.

“I wanted to figure out how could I make a company that could make mobile renewable power that was completely fossil-fuel-free that we could bring to address to these emergencies,” says Flanagan. “And that would be rapidly deployable and easy to use, because that’s the barrier right now—using renewable energy is just too complex.”

Natural disasters have cost $170 billion per year over the last decade, according to a recent UN disaster risk report. (Hurricane Ian is expected to cost insurers $75 billion, making it the second costliest natural disaster ever after Katrina.) That cumulative economic toll is expected to climb as disasters become more frequent. Between 350 and 500 disasters have occurred every year for the last two decades, but the UN predicts the tally will reach 560 annually, or 1.5 per day, by 2030.

As disasters have become more commonplace, so too has the use of diesel generators that power recovery and cleanup. A recent study by the economic and public policy consulting group M.Cubed found that in California, the number of backup diesel generators in the Bay Area region jumped by 34% to 8,722 between 2018 and 2021. In the district around Southern Los Angeles, they jumped 22% to 14,785 between 2020 and 2021. Such generators are dirty. According to a recent study by Facilities Engineering Associates, an engineering firm, a typical diesel generator emits 2.15 times as much CO2 as the U.S. power grid to produce a megawatt-hour of energy.

“I am excited about the prospect of broadening consumer choices, building redundancy in emergency power generation options, [and] offering a low carbon footprint solution to what is often the dirty business of post-storm recovery,” Dennis Smith, planner-in-residence in the Department of Urban and Regional Planning at Florida State University, says about renewable systems like Sesame’s. “What kind of systems do we want in the future? We want these clean solutions.”

Another upside of small, renewable-energy grids like Sesame’s is they don’t need to be refueled once set in place, says Masood Parvania, director of the Energy and Power Innovation Center at the University of Utah.

“The point is sometimes like in Florida a few weeks ago, the extent of the damage is so big you don’t have access. You can’t bring in fuel, the gas stations don’t have fuel, and transportation is also a challenge,” Parvania says. “You really need something that could potentially work there for a long period of time. And at the end of the day the thing you have is solar because there is sun is there all the time.”

Hurricane Maria hit the Caribbean in 2017 just as Sesame was launching, and Flanagan wanted to debut Sesame’s prototypes in Puerto Rico. But a conversation with Richard Branson’s nonprofit, Virgin Unite, sent her team in a different direction. “He’s like, ‘Everybody’s in Puerto Rico. Nobody’s helping Dominica. Do something there,’” Flanagan recalls.

Working with the island nation’s ministry of public health and the nonprofit Direct Relief, Sesame Solar installed one container-based prototype in the capital of Roseau and another in the remote village of Grand Fond, which required a trip over a winding, potholed mountain.

People waiting at the Sesame Solar nanogrid operating as part of a medical clinic in Grand Fond, Dominica.
Courtesy of Sesame Solar

“We put in solar nanogrids that backed up hospitals and provided wi-fi and clean water. And they’re still being used,” Flanagan says.

In the years since, Sesame has fine-tuned its mobile disaster response nanogrid to fit onto shipping containers or two- or three-axle trailers pulled by pickup trucks. The grids’ power comes from solar panels on the roof and on retractable wings that swing up and out (hence “Sesame,” as in “open sesame”), lithium ferro-phosphate batteries, and now a hydrogen fuel cell.

The batteries on a Sesame nanogrid hold between 15 and 150 kilowatt hours depending on size, Flanagan says; a typical U.S. household uses about 24 kWh in a day. The units, which can be deployed by one person in about 15 minutes, contain a 5G mesh network, water filtration systems, and workspaces for offices and medical clinics.

Since launching alongside government and nonprofit disaster relief in Dominica, Sesame has largely worked with corporate and government clients that need to get up and running after disasters, such as telecom providers like Comcast and Cox, and the U.S. Air Force.

“It’s tough conditions; you know nothing, you have to bring in all your own water. And it’s the only way to get the network back up and running,” says John Hewitt, VP of broadband communications at EnerSys, the industrial power firm that provided the Sesame mobile nanogrids to Comcast in Ft. Meyers.

Power as a service

An entrepreneur and investor for over 25 years, Flanagan worked with Steve Jobs as an independent software developer; her company, GS Publishing, wrote the publishing software and high-end printer drivers for NeXT, the influential computer workstation company Jobs founded after being forced out of Apple. In 1996, she launched WebWare, a digital asset management company and Software as a Service or SaaS pioneer. In recent years, she founded SCIO, Phenomenelle Angels Fund, and BELLE Capital, funds and advisory firms through which she has invested in more than 40 companies, mostly women-led.

Next year, Flanagan plans to raise a $10 million round of funding for Sesame. Further down the line, she expects to raise another $100 million to build enough mobile renewable nanogrids to return to the “as-a-Service” industry and allow companies that want emergency backup power to subscribe to Sesame instead of buying the nanograids outright.

For Vijay Chattha, general partner at VSC Ventures, which contributed $400,000 toward Sesame’s funding round, such nanogrids will expand far beyond emergencies in the future.

“The idea of mobile, renewable energy is going to become mainstream in five years,” he says. “I think there’s going to be a lot of benefit of these things outside of disaster response. Think about things like live entertainment concerts, and for organizations to thrive in places did not connect into the grid.”