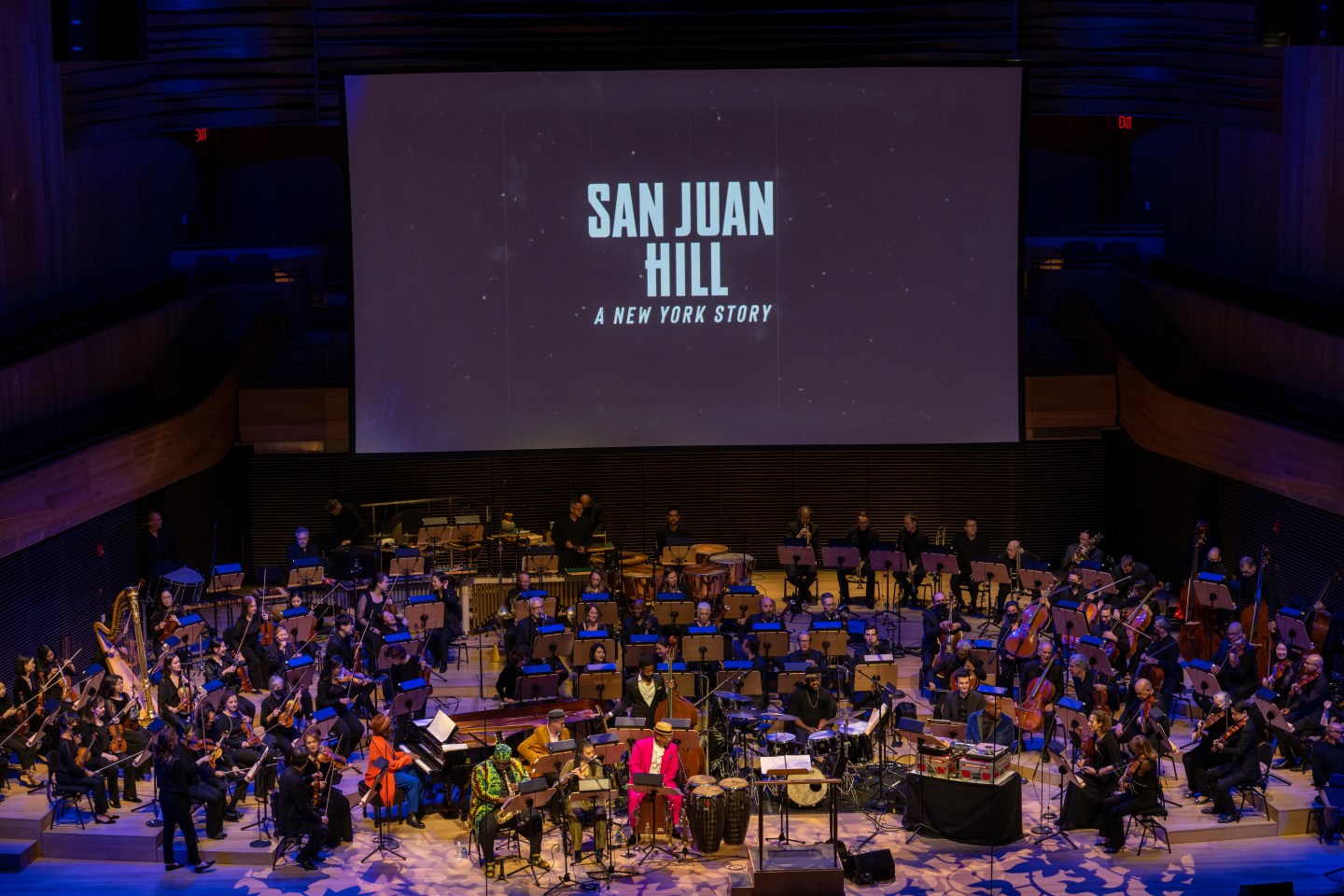 The opening night of "San Juan Hill" at the newly renovated David Geffen Hall at Lincoln Center is emblematic of the venue's—as well as the institution's—transformation of inclusion and diversity.
Alexi Rosenfeld—Getty Imagese

Lincoln Center’s David Geffen Hall—formerly known as Philharmonic Hall, then Avery Fisher Hall—reopened on Oct. 8 after a massive interior redesign. “It’s not a renovation,” said Deborah Borda, president and CEO of the New York Philharmonic. “It’s a transformation. It’s an entirely new hall. We stripped to the bones.”

Lincoln Center’s initial promise was to be a central celebration point for the highest of the (Eurocentric) performing arts—opera, dance, orchestra—a jewel for the world located in New York City. Performance venues were defined by soaring architecture and set upon a contemplative plaza for public enjoyment.

But at launch, Philharmonic Hall was an acoustic atrocity according to musicians, and interior overhauls were required twice between the year it first opened in 1962. Now, Architectural Digest proclaims the orchestra’s home is a triumph of experience and inclusion. “[T]ransformed once more—though its façade, windows, and beloved sculpture terrace remain, Diamond Schmitt Architects and Tod Williams Billie Tsien Architects have designed a new David Geffen Hall, where sonic quality trumps all and neighbors are welcome.” It’s a hit. “A mighty improvement,” says the New York Times.

But of all the improvements, “all neighbors welcome,” might be the most significant of all.

Lincoln Center’s original sin is that it sits on land that was once the home of a low-income Black and Hispanic neighborhood called San Juan Hill, razed to the ground to accommodate then New York Parks Commissioner Robert Moses’s racist urban renewal schemes. To make way for Lincoln Center, the focal point of the plan, some 7,000 poor and vulnerable Black and Hispanic families were displaced.

So, it was a pretty big deal that the opening performance at the newly minted David Geffen Hall was a tribute to the neighborhood where the Charleston was born, where jazz legend Thelonious Monk lived and played with his peers, and the vibrant people who once lived there.

Jazz trumpeter and composer Etienne Charles pitched an idea to create an original work for the building’s reopening that would evoke the community, in particular, the cultural vibrancy that had been part of its unique appeal.

He found an eager set of ears.

“It had already been in conversation, here,” Shanta Thake, Lincoln Center’s chief artistic officer, told the New York Times, saying the team had been “starting to really think about: What was our history? How do we talk about our history?”

Voices of the past came to life during the reopening with the premiere of Charles’s composition “San Juan Hill,” a 75-minute multimedia work, in which he and his group, Creole Soul, joined the New York Philharmonic for two extraordinary performances. And in lieu of the usual black tie okey-doke opening gala, Geffen reopened with a choose-what-you-pay concert, along with a limited number of free tickets.

I caught up with Lincoln Center’s inclusion-minded president and CEO, Henry Timms, yesterday by phone. “We finished [the Geffen renovation] two years early, during a pandemic,” he said, sounding both pleased and spent. But the real music was in the details, he told me.

The team used the renovation as an opportunity to consider community impact and set a goal of 30% of construction contracts going to minority and women-owned businesses. “We reached 42%,” he said. Workforce inclusion goals specific to the project were 40%. “We reached 52% easily,” he said. They also enacted a robust workforce construction training program for underrepresented individuals helping some three dozen new construction workers to get their union cards.

And to support the new emphasis on breakthrough programming like the Charles commission—they call it a reimagined American songbook—they’ve developed inclusive audience strategies that are working. The choose-what-you-pay pilot program they instituted as Lincoln Center reopened has filled seats with new fans. Some 70% of attendees had never purchased a ticket to a Lincoln Center program, 43% of them identified as BIPOC, and 70% came from households with annual incomes of $75,000 or less.

Timms credits his team for the engagement numbers and the Geffen launch but in a very specific way.

“This is a diversity success story,” he says, a counterargument to familiar “talent pipeline” excuses and a case study in expertise, team autonomy, and shared power. He ticks through some stats from the majority-white organization he inherited in 2019:

In addition to outpacing most corporate diversity initiatives, they’ve also launched a two-year program designed to prepare a pipeline of board members for Lincoln Center organizations. “Our very first class has 81% of people of color, and half are women,” he says. “That’s the future we’re building.”

In the coming weeks, I’ll be sitting down with Timms and the team for a deeper look at their inclusion success. (Let me know what you’re curious about—subject line: Lincoln Center). “Everything we’ve been able to do is because of who has been included,” he said. “The business case for diversity? It’s actually transformation.”

Wishing you a transformational weekend.

A black village was razed to make way for Central Park. It was called Seneca Village, and it grew to span the blocks between 82nd and 89th streets on what is now the western edge of the park. It was founded in 1825 and became a refuge for the nominally free men and women who lived and worked there; half of the residents owned their own homes. Three churches, a school, and dozens of homes were demolished, lost in a court battle that didn’t last long. Researchers from Columbia, CUNY, and the New York Historical Society have been pushing to excavate, with some efforts beginning in earnest in 2011. Understanding more about the Black experience up North in the 1800s would be a gift to history. It can’t have been easy. Said Mordecai Noah, founder of The New York Enquirer, “the free negroes of this city are a nuisance incomparably greater than a million slaves.”
Bushman blog

How Italians became white. New York Times editorial writer Brent Staples contributes to the historical record with this opinion piece which highlights the deliberate steps Congress took in 1790 to ensure the racial purity of the young country. But immigration quickly changed the calculus. “[T]he surge of newcomers engendered a national panic and led Americans to adopt a more restrictive, politicized view of how whiteness was to be allocated,” he notes. Some immigrant groups were whiter than others. The story of how Italian immigrants went from racialized pariah status in the 19th century to white Americans in good standing in the 20th offers a window into the alchemy through which race is constructed in the United States and how racial hierarchies can sometimes change.”
New York Times

Welcome to the glass floor. Now, please step aside. Here’s a book thesis: In addition to not being able to afford tickets to the opera, the poor and middle class are increasingly unable to rise up the income ranks. Instead, the undeserving rich are increasingly taking up space that they haven’t earned and for which they are wholly unqualified. “There’s a lot of talent being wasted because it’s not able to rise, but there’s also a lot of relatively untalented people who aren’t falling and end up occupying positions they shouldn’t,” said Richard Reeves, a Brookings Institution researcher and the author of this barnburner of a book, Dream Hoarders: How the American Upper Middle Class Is Leaving Everyone Else in the Dust, Why That Is a Problem, and What to Do About It.  “Over the last 30 years, nearly every institution of social mobility, from education to work to government spending, has been systematically tilted toward the wealthy,” reports Michael Hobbes.
Huffington Post

“I don’t like to think of my music as bebop but as modern music. I don’t dig the word.”

—Thelonious Monk, who lost access to performance stages in New York City when the police confiscated his cabaret card during the height of his career.