‘Cultured’ meat could help solve the climate crisis. Here’s what it will take to move it from the lab to the dinner table 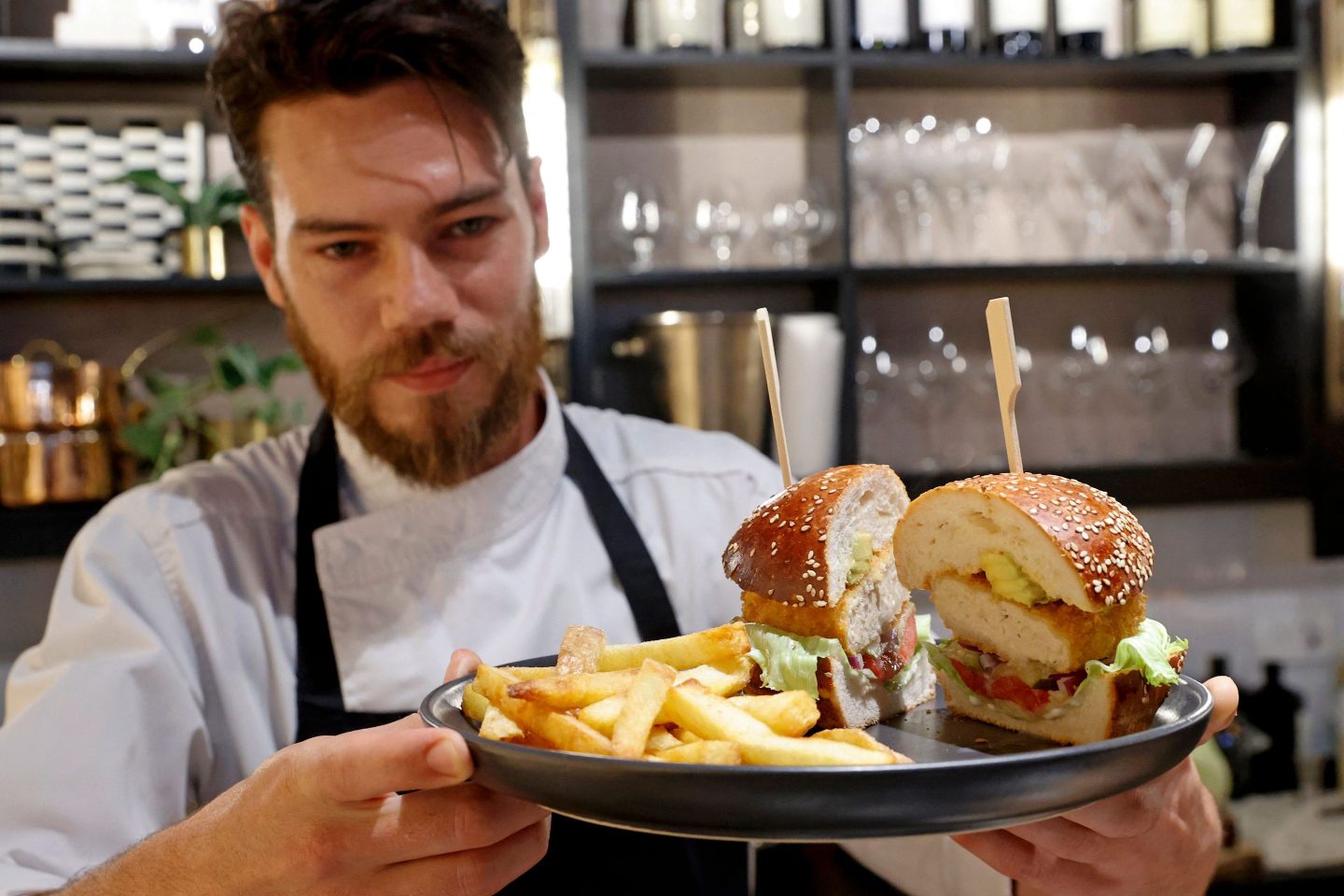 Chef Shachar Yogev serves a burger made with "cultured chicken" at a restaurant in the central Israeli town of Ness Ziona.
JACK GUEZ—AFP via Getty Images

At around 7 p.m. on Dec. 19, 2020, three young adults and their teacher gathered for dinner at the restaurant of the swank 1880 club in Singapore. They ordered chicken and waffles and, on the side, chicken baos. “History Made,” proclaimed the menus, because those diners had eaten the world’s first portions of chicken meat manufactured from cells, rather than slain birds.

The location was unlikely, but no accident. After a California-based start-up, Eat Just, succeeded in cultivating chicken meat from cells, it chose Esco Aster, a Singapore-based synthetic biology (syn-bio) contract manufacturing company, to manufacture cultivated chicken nuggets and breasts as well as shredded chicken. Then the Singapore Food Authority (SFA) gave Eat Just permission to produce small batches of cultured cells in Esco Aster’s food-safe bioreactors, and to sell the products locally once they had met its stringent food safety criteria. Thus, the SFA became the world’s first regulatory authority to approve the sale of cultured chicken meat.

Unlike other nations, Singapore is wooing syn-bio start-ups across the world to make the city their home base. In addition to cell-based meats, the government is catalyzing the manufacture of proteins from plants, algae, and fungi. It has set up a Future Ready Food Safety Hub to help companies navigate its approvals process, and to speed up the launch of bio-engineered products.

Over two dozen syn-bio food companies—such as Shiok Meats, which recently launched the world’s first lab-grown crab and shrimp meats—have set up shop in Singapore. Thus, the city-state, which has hardly any farmland or livestock, plans to scale new technologies to meet its goal of producing 30% of its food locally by 2030, and boost economic growth by turning into one of the world’s first—and biggest—cultivated meat exporters.

Singapore may be showing the way, but most countries, unaware of the potential of syn-bio, haven’t put the emergent industry at the top of their policy agendas. As a result, the syn-bio industry’s growth may be getting stymied. For instance, several forecasts in 2020 suggested that cultivated meat was likely to grow into a $150 billion segment by the end of this decade, and account for around 10% of the global meat market. Two years later, that seems unlikely, not because the technology’s development has slowed but because governments have been slow to legislate, regulate, and foster the industry.

It’s shocking because syn-bio products have several advantages over conventional ones. They’re sustainable, using little, or no, water, land, or carbon-emitting materials—and much less that most traditional livestock. They promise to make human health better, with new syn-bio therapies likely to vanquish many diseases. And novel products, such as soil-nourishing bacteria, will help boost agricultural production manifold. In fact, the technology offers governments the ability to decouple economies from global supply chains, and reduce their dependence on raw material imports.

Syn-bio is clearly the next growth frontier, so developing suitable policies will be critical to unlock its benefits. According to a BCG study, syn-bio technologies could reshape industries that will account for nearly a third of global GDP by 2030 if governments develop the appropriate regulations and rules. Moreover, as Singapore has shown, creating the conditions in which syn-bio start-ups will flourish isn’t solely the prerogative of large, industrialized countries.

Three keys to a syn-bio future

Although each nation’s starting point will differ, every government must tackle challenges on three fronts to benefit from syn-bio.

Governments must, first and foremost, invest in advancing nations’ and companies’ knowledge of synthetic biology, much of which is still uncharted territory. As the U.S. recently did, countries can orchestrate syn-bio research by announcing formal policies, creating budgets, and setting up national agencies to spearhead the process.

Policymakers should focus on gathering and synthesizing scientific and technical knowledge by funding basic research programs; creating R&D facilities; and catalyzing the creation of graduate and post-graduate education programs in universities and colleges. One key objective should be to create talent for applied areas—such as bioreactor builders and fermentation specialists—so that they develop efficient microorganisms that use second-generation feedstock, such as organic waste, rather than processed sugars. Another priority should be to create computing resources, in terms of people and processing power, because the amount of biological data available is fast outpacing countries’ processing capabilities.

Apart from creating national repositories of scientific knowledge that any individual or institution can access, governments must push for the development of open standards and protocols to facilitate knowledge dissemination. They must create trusted data-sharing platforms and partner with institutions such as iGEM and BioBricks, which have developed the Get & Give philosophy and established standards for syn-bio parts to ensure their interoperability. For instance, Google’s DeepMind and its A.I., Alpha Fold, in tandem with a European intergovernmental organization, recently made public the structures of nearly all the proteins known to science.

Nations that are starting out on syn-bio quests must harness international forums and open platforms to move up the learning curve. Syn-bio research is becoming global; in 2022, iGEM’s well-known syn-bio competition saw 46 countries participating, 50% of which were developing countries—twice as many as a decade ago.

Second, policymakers must support business’ scaling of syn-bio applications, stipulating design-to-cost milestones to ensure that the efforts develop applications that will make an impact. A recent BCG study, for instance, projected when different industries are likely to be affected by syn-bio technologies. Governments must monitor the maturity of these emerging technologies by tracking cost and scale tipping points, and develop funding roadmaps that will help grow them to commercial scale.

Co-ordination can maintain the design-to-cost focus from the get-go, and help overcome the hurdles in the way of the commercialization of syn-bio technologies. Don’t forget, only a few microbes such as E. coli and common yeast have been produced at scale. Others, such as mammalian cells, haven’t reached that stage—yet.

Because syn-bio technologies don’t scale linearly, engineering and development will be crucial to make it possible. Governments must use multilateral forums to forge connections between local and global stakeholders, and use technical collaborations to reduce knowledge gaps.

Countries trying to catch up should nurture the capabilities to develop applications that have commercial precedents, such as bio-catalysts and bio-chemicals. They best ways of doing that are to both orchestrate cross-border joint ventures and technology transfers, and intensify research efforts at home. Governments would be wise to attract global investments in late-stage startups, so the latter can scale and won’t need to be acquired by multinational giants.

In most countries, incubators and accelerators that have seed funds and innovative financing models will help translate research into commercial ventures, and plant the financial foundations of healthy syn-bio ecosystems. For instance, in 2014, Singapore piloted intellectual property valuations, which raised awareness about IP’s use as collateral and helped create an effective syn-bio ecosystem in the city.

Finally, governments must balance the need to create a friendly regulatory environment for syn-bio ventures with the need to win a social license. People have deep suspicions about syn-bio applications, just as they have about organisms whose genetic makeup has been modified in a laboratory using genetic engineering or transgenic technology (GMOs). Policy-makers must keep educating society about syn-bio technology’s potential and risks, and gauge perceptions and acceptance of its applications, so they can make course corrections.

Stakeholders must be involved at every stage of the value chain, from lab to market, to ensure that consumers buy syn-bio products. It’s smart to proactively discuss the intent of the new technology. For instance, DARPA quietly launched Insect Allies, a $45 million project to test the ability of engineered virus-carrying insects to protect crops from pestilence, in 2016. After many U.S. scientists criticized the project’s intent, DARPA was forced to defend itself by highlighting its benefits and describing the safeguards it had deployed.

Syn-bio ventures must ensure the equitable use of shared resources, such as water, if they are to retain the social license from stakeholders such as farmers and indigenous populations. When Amyris set up a fermentation facility in Brazil recently, for example, it sourced feedstock from local sugarcane farms that didn’t contribute to deforestation; required minimal irrigation; and didn’t suck up drinking water. Local regulators must ensure syn-bio firms adhere to rules and laws even as they engage with local communities to identify all their concerns.

Finally, governments must keep in mind that the same syn-bio products can be created in different ways, and so, the regulatory regimes will need to vary. For instance, startups such as Impossible Foods, Mosa Meat, and Meati all compete in the cultured meats market, but, because they use microbes, cells, and fungi, respectively, to develop products, they must be subject to different legal frameworks. That could create entry barriers if policy-makers don’t streamline the regulatory landscape.

Just as the 1990s belonged to the Internet, the 2020s mark syn-bio’s coming of age. As the world’s knowledge and use of syn-bio technologies grow, governments have no choice but to develop policies that will allow the industry to flourish. Because the technology creates novel and sustainable offerings, policy-makers must come to grips with syn-bio if they wish to boost economic growth even as they safeguard the environment. Only policy-makers that seize this dual opportunity by enacting supportive policies will be able to build their nations’ competitive advantage for the Bio Age.

Vinit Patel is a project leader at BCG and ambassador at the BCG Henderson Institute.