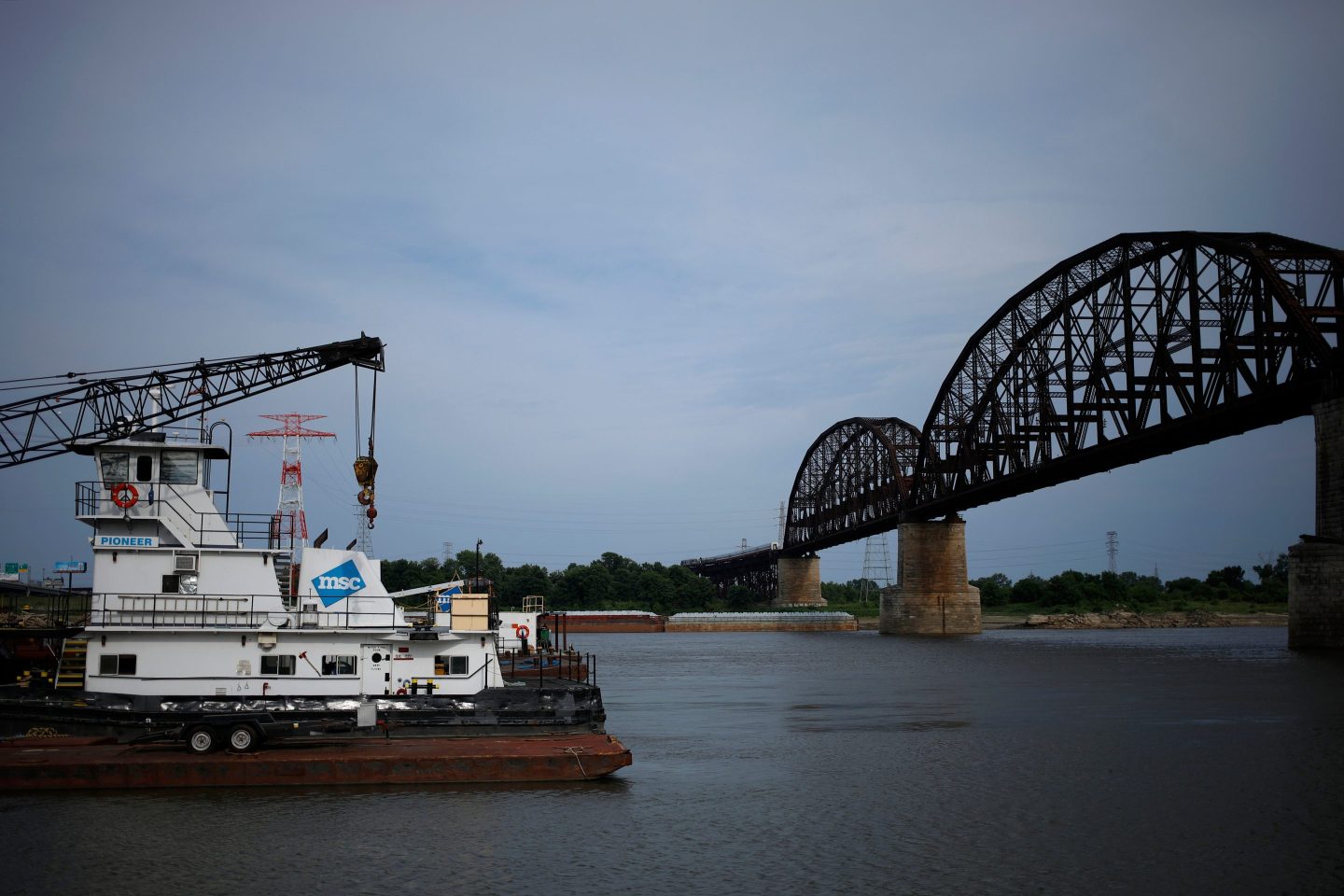 A barge on the Mississippi River in St. Louis, Missouri.
Luke Sharrett—Bloomberg/Getty Images

The Mississippi River is a vital U.S. waterway that ferries key commodities between the heart of America and the Gulf Coast—and drought is putting waterborne trade in jeopardy.

Drought depleted river levels so much that in some spots vessels are getting stuck. One shipping company said low water levels are causing severe impacts to navigation not seen since 1988. It’s a key concern for transporting goods from a river basin that produces 92% of the nation’s agricultural exports, especially during harvest season.

The Mississippi River is the main artery for U.S. crop exports, with covered barges full of grain floating to terminals along the Gulf of Mexico. Petroleum and imported steel also transit through sections of the waterway as does fertilizer traveling from New Orleans. The dryness—and the low water levels it brings—imperils such commerce. In 2012, for instance, the Great Plains drought led to $35 billion in losses for the US, including closing the river at least three times.

The Mississippi River is currently closed near Stack Island, Mississippi, causing a backup of 117 vessels and 2,048 barges in the area as of midday Thursday, while a shutdown near Memphis, Tennessee has caused a smaller logjam, according to the Coast Guard. The U.S. Army Corps of Engineers is dredging near Stack Island and the Coast Guard intends to reopen the waterway with restrictions at some point Friday.

“Chronic low water conditions throughout the inland river system have had a negative effect on many who rely on the river,” said John Roberts, chief executive officer of Ingram Barge Co., the top U.S. barge operator. Low water levels are affecting part of the company’s operations below Baton Rouge, Louisiana, he said Thursday in an emailed statement.

Major barge lines on the river are turning away spot business as they struggle to meet demand for grains, metals and other raw materials already contracted well in advance. Shipping prices are soaring.

The reason for low river levels is simple: lack of rain.

Minneapolis received about a quarter-inch of rain in the past 30 days, below the average of almost 3 inches for this time of year, according to meteorologist Steve Silver of Maxar Technologies Inc. St. Louis received 0.86 inches, less than a third of average, and Memphis has seen a half-inch instead of more than 3 inches.

Many parts of the Midwest and Plains states are experiencing drought, which affects water flowing into tributaries that normally feed into the Mississippi, Silver said.

Things are unlikely to improve anytime soon. There’s less than an inch of rain expected across the region through the end of next week, according to Accuweather meteorologist Brandon Buckingham.

Here are the biggest market impacts:

Some 60% of all grain exported from the US is shipped along the river through New Orleans and the Port of South Louisiana, according to the National Park Service. The jam comes as farmers are in the middle of harvest, when they’ll need to transport a lot of crops on the waterway. The stoppage could cause exports to drop. The threat is already hitting soybean futures, which fell to a two-month low Thursday.

“It’s extremely serious because of the time of year—this is exactly when the seasonal move of soybeans is happening,” said Alan Barrett, director of consulting and research at Higby Barrett in Memphis.

Volume on the waterway is effectively 45% lower than usual because each boat is pushing fewer barges, and each barge is carrying less than it normally would, he said.

Farmers in the U.S. apply fertilizer in November and a slowdown in river traffic could delay those crop inputs from reaching the Corn Belt in time, said Alexis Maxwell, an analyst at Bloomberg Intelligence. Nitrogen fertilizer, which corn farmers must apply every year, travels by river up from New Orleans to the Midwest.

About one third of U.S. consumption of the common nitrogen fertilizer urea moves on the Mississippi, Maxwell said.

Still, about 5.4 million barrels of crude and refined products move by tanker and barge between the Midwest and Gulf Coast each month, according to the EIA. Valero’s Memphis refinery sends products by barge north and east on the river, while Phillips 66’s Wood River refinery in Illinois also moves product by barge.

The river is a major thoroughfare for thermal coal—the type that’s burned in power plants to run turbines and generate electricity—that is shipped around the world. Any snags threaten to disrupt trade at a time when coal demand is soaring as Europe weathers an energy crisis exacerbated by Russia’s war in Ukraine.

About 35% of U.S. thermal coal for export travels on the Mississippi, so this will significantly affect the market, said Ernie Thrasher, CEO of Xcoal Energy & Resources LLC, a major U.S. exporter.

“It will be a big disruption to supply,” he said.