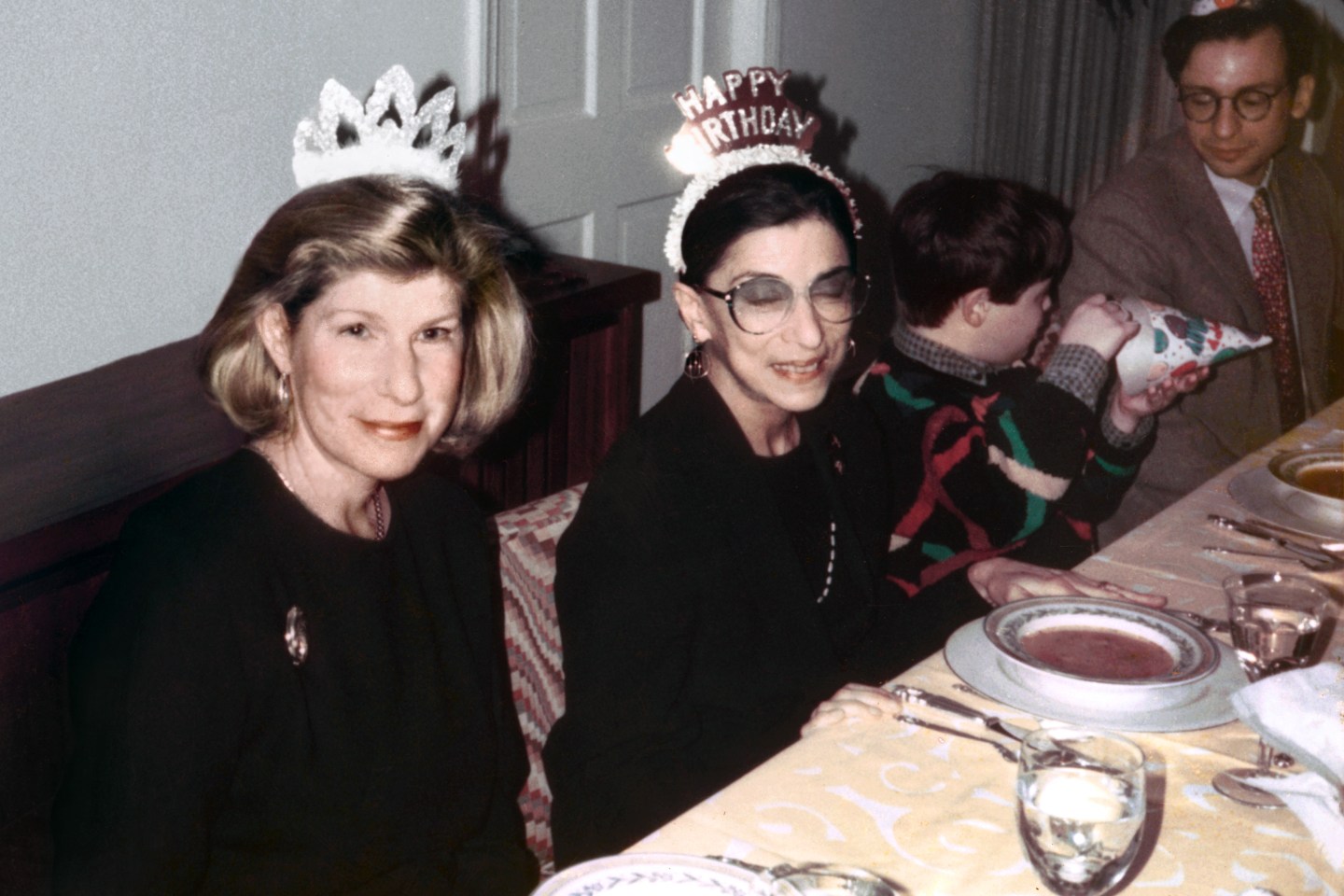 Longtime NPR correspondent Nina Totenberg is known for her authoritative coverage of the Supreme Court—and for her decades-long friendship with late Justice Ruth Bader Ginsburg. In a new book, “Dinners With Ruth: A Memoir on the Power of Friendships,” Totenberg reflects on their relationship. The friendship between Totenberg, a journalist, and Ginsburg, a justice who was part of the institution Totenberg covered, isn’t without controversy—and discussion of the perceived conflict of interest has resurfaced with the memoir’s publication. In this excerpt, Totenberg reflects on the importance of friendship in tough times.

– Dinners with Ruth. With Ruth, I always thought that there would be a next time. For more than 20 years, she had defied not one but three bouts of cancer, not to mention other medical complications from bowel obstructions to shingles. And after each hospital stay, she had always come home. Her endurance, her will to live, even her plain old-fashioned grit, were unmatched. After one surgery, when most of us would be pushing the nursing station call button, she drafted a major speech. She even participated in Supreme Court oral arguments from her hospital bed.

But it was so much more than her repeated resurgence in the face of illness. For nearly 50 years, Ruth and I had knit ourselves ever more tightly into the fabric of each other’s lives. Aside from my two sisters and my National Public Radio sisters, she was my longest-serving friend. She was loyal, clear-eyed, and deadpan funny. Although she enjoyed becoming an icon in her eighties, she enjoyed far more watching other people perform.

Still, she and I performed well together; I’ve lost count of all the times that I interviewed her onstage. It helped that we were personal friends long before our professional lives propelled us into the spotlight. We first met over the phone in 1971. Ruth was a law professor in New Jersey; I was a print reporter. NPR was in my future, but I would not be hired there for another four years, and nearly 22 years would pass before Ruth was appointed to serve on the U.S. Supreme Court.

Through everything, we could—and did—keep our boundaries. The irony is that while work introduced us, and work has defined each of us, in her own way, our friendship was never about work. I can recall only one time when Ruth pleaded with me not to ask her a question on a particular topic. In reply, I told her, “I’m sorry. I have to. It’s my job.” And, conversely, only one time when I said in frustration, “But, Ruth, why didn’t you tell me that when I asked? It’s news.” Instead, our friendship worked because we held each other in the highest regard. From the start, we sensed just how hard the other had fought to climb the ladder to get to where she was. We shared a passion for music, opera, shopping (I more than she), and food, especially food prepared by far better cooks than we were. And a steady stream of good stories, jokes, and bits of gossip. We were both eager questioners, although with slightly different ends: I like asking questions to get information; Ruth liked asking questions to place an answer in a different light.

These traits were the easy parts. The bedrock of true, solid friendship is being there for the hard things. And there, our foundational rocks were sure and strong. Each of us saw the other through great personal joys and also deep personal sadness, through illness, loss, and widowhood.

During the long and devastating illness and eventual death of my first husband, Ruth was there to draw me out of my isolation and grief; 12 years later, I would, sadly, be able to reciprocate her kindness when her beloved husband, Marty, died. When I remarried, she was the one who officiated at my second wedding to my husband, David, overseeing a joyous ceremony that she scripted down to the “spontaneous” jokes. She never let on until the end of dinner that she had been in the hospital the day before; she had “forbidden” Marty to tell me.

Throughout her final years, David and I were able to wine and dine her to keep her spirits up, particularly after Covid-19 struck. We shared so many small dinners together that Saturdays became “reserved for Ruth.” Bouillabaisse, the light French fish stew, was her favorite, and David made it magnificently, adapting his version from Julia Child’s recipe. The last time I saw Ruth, it was for supper.

Ruth and I never indulged in gossipy conversations about her colleagues on the Court. I never got a scoop from her, and she never volunteered any top-secret anything. Nor did we endlessly dissect cases or attorneys or debate what might become of Roe v. Wade. Mercifully, in fact, we did not have to talk shop when we were together in private. And Ruth, if you knew her, was perfectly willing to say in public what she was thinking, or as much as she would ever share with me. That same ethos applies to me.

We aren’t from a particularly confessional generation. What we shared was the special warmth and closeness of longtime friendship. We were present in each other’s lives, especially when it mattered most.

- Going solo. MacKenzie Scott has filed for divorce from her second husband, Dan Jewett. Jewett was quietly removed from past mentions of their joint philanthropic endeavors, including the Giving Pledge's website and Scott’s Medium posts announcing her philanthropic donations. New York Times

- Best places to live. More middle-aged Americans are joining the “sandwich generation,” providing caregiving for multigenerational households. In many cases, where they live will determine how adeptly they can navigate their caregiver roles. Fortune released its inaugural Best Places to Live for Families list on Wednesday, which ranks the top 25 cities across the U.S. based on education, medical care, and aging support systems. Fortune

- Candid about health. Journalist Katie Couric shared Wednesday that she underwent treatment for breast cancer over the summer and ended her radiation treatment on Tuesday. Couric, who lost her first husband and multiple family members to cancer, says she hopes that going public with her experience will encourage others to get annual screenings. CNN

- Clearing the air. Laurene Powell Jobs, the widow of Steve Jobs and founder of Emerson Collective, opened up about her corporation, which combines for-profit investing and philanthropy. Powell says there are misconceptions about Emerson Collective because donations are anonymous and its focus is broad. “Money is the fuel for our work. I really don’t want it to be used as leverage,” she says. Wall Street Journal

- Eyeing an exit. Treasury Secretary Janet Yellen may exit her role after the midterm elections. Sources say the decision comes down to multiple factors, including the outcome of November’s elections and which party controls the Senate. Axios

“We want to show them that we don’t care about their standards, their definition of beauty, or what they think that we should look like. It is to show that we are angry.”

—Faezeh Afshan, an Iranian chemical engineer living in Bologna, Italy. She is one of many women to publicly cut her hair in protest of Iran’s beauty standards.