Gavin Newsom signs 2 new laws to tackle ‘the original sin of the state of California, and that’s the issue of housing and affordability’ 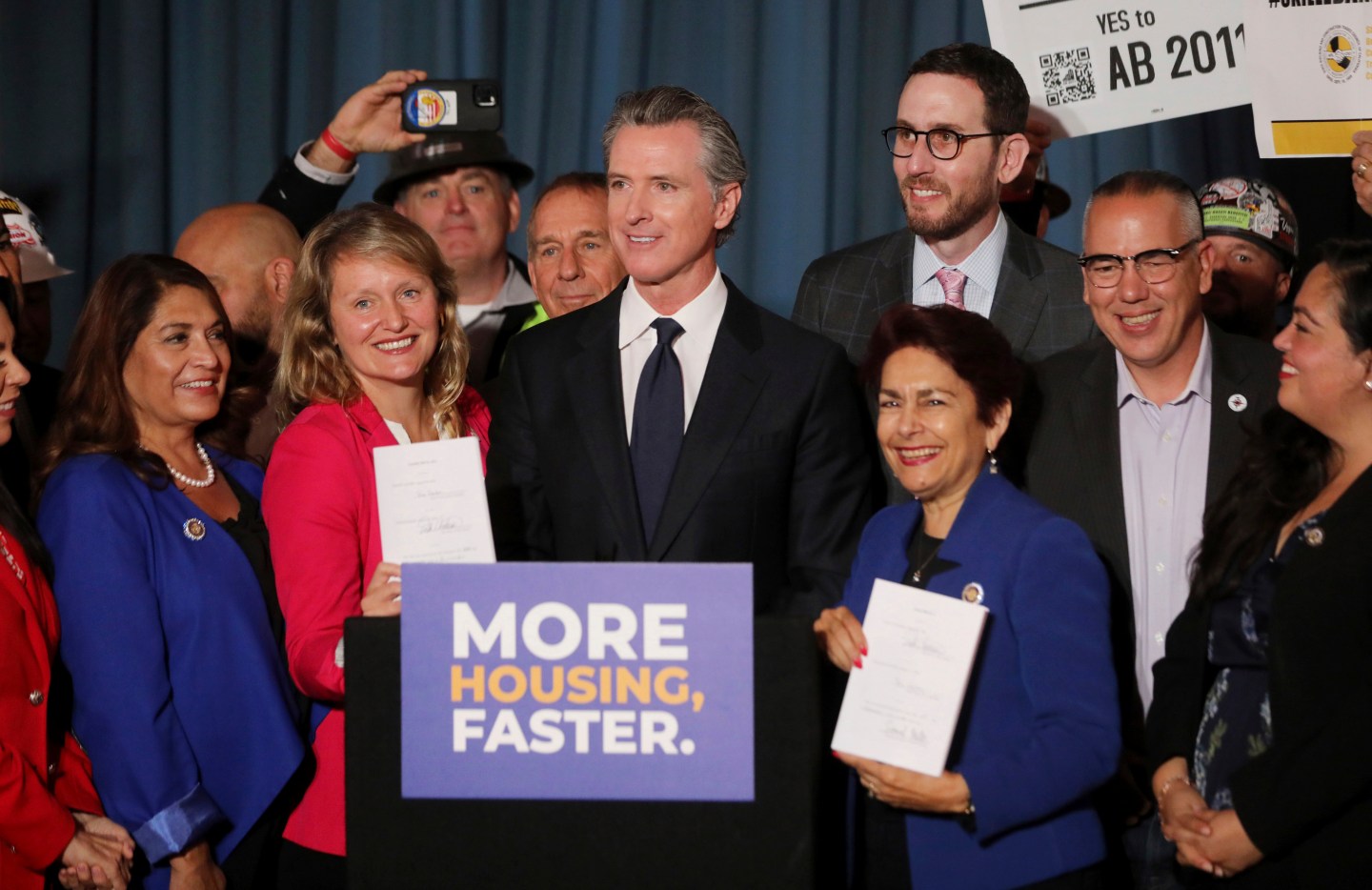 SACRAMENTO, Calif. (AP) — They’ve become a familiar sight along the wide commercial corridors of America — empty buildings once filled by big retailers who have closed their doors, in part because many of their customers shop online.

Now, two new laws in California would let developers build housing on that land and largely prevent revenue-hungry local governments from stopping them.

Gov. Gavin Newsom signed two laws Wednesday that would open up much of the state’s commercial land for residential development. It’s a long-sought victory for affordable housing advocates, who say such sites are ready-made for apartments because they are often near populated areas and come with ample parking.

“This is a moment on a journey to reconcile the original sin of the state of California, and that’s the issue of housing and affordability,” Newsom said in San Francisco before signing the bills into law. “We need to all be a little bit more accountable to this crisis of affordability.”

Local government officials say the laws undermine their authority and upend years of careful planning that reflect community preferences. But there’s also a financial consequence, they say, because stores generate more property taxes for local governments than homes do.

“It’s a concern when state law is going to override these local decisions, particularly when these local decisions are made in a public process with the community as part of a larger housing plan,” said Jason Rhine, assistant director of legislative affairs for the League of California Cities.

California, the nation’s most populous state with just over 39 million residents, has a housing shortage that has driven up home prices and contributed to a homelessness crisis. State officials say California needs to build about 310,000 new housing units each year over the next eight years, more than 2 1/2 times the number the state normally builds each year.

Lawmakers in the Democratic-controlled state Legislature introduce dozens of bills each year to try to increase housing production, but many of their boldest ideas often fail in the face of opposition from local governments, labor unions and neighborhood groups.

One popular idea in recent years has been to override local laws about where housing can be built. Housing advocates complain that local governments are often content to let commercial buildings sit vacant for years — sometimes for decades — hoping for a replacement that will generate more property taxes, rather than change the law to allow housing there.

Previous efforts to do so have failed to pass the Legislature, but this year, lawmakers passed two bills, both of which Newsom signed Wednesday.

One law will let developers build housing on some commercial land without having to ask permission from local governments, as long as a certain percentage of the housing is affordable. Another law will let developers build all market-rate housing on some commercial land — which would be more lucrative — but the projects would still have to go through an environmental review process.

“Stores are leaving permanently, the Sears, the Toys R Us, the JC Penneys, the Kmarts — they are closing,” said Democratic Sen. Anna Caballero, author of one of the laws. “There is not a thing that is going to take the place here commercially, and so the ability to actually transform the property and to do it in an expedited way … is invaluable.”

When he was running for governor in 2017, Newsom pledged to develop 3.5 million new housing units by 2025 — a number the state is likely to fall far short of meeting. Newsom said Wednesday that he’s now shooting for 2.5 million new housing units by 2030, saying his original number “was always a stretch goal” that “in the process of trying to achieve it will allow us to see what’s possible.”

“We intend to continue to have audacious goals because Californians deserve them,” Newsom said.

The new laws reflect a compromise between labor unions and housing developers. Some labor unions, including the powerful State Building and Construction Trades Council of California, had insisted that legislation should require a “skilled and trained” workforce to build the housing. That means a certain percentage of workers would have participated in a state-approved apprenticeship program.

But housing developers argue there aren’t enough workers available to meet that standard, which would make some projects difficult to complete.

“Doing anything that is big or consequential in the Legislature isn’t easy. And it can be messy. But at the end of the day, all sides came together,” state Senate Democratic Leader Mike McGuire said.