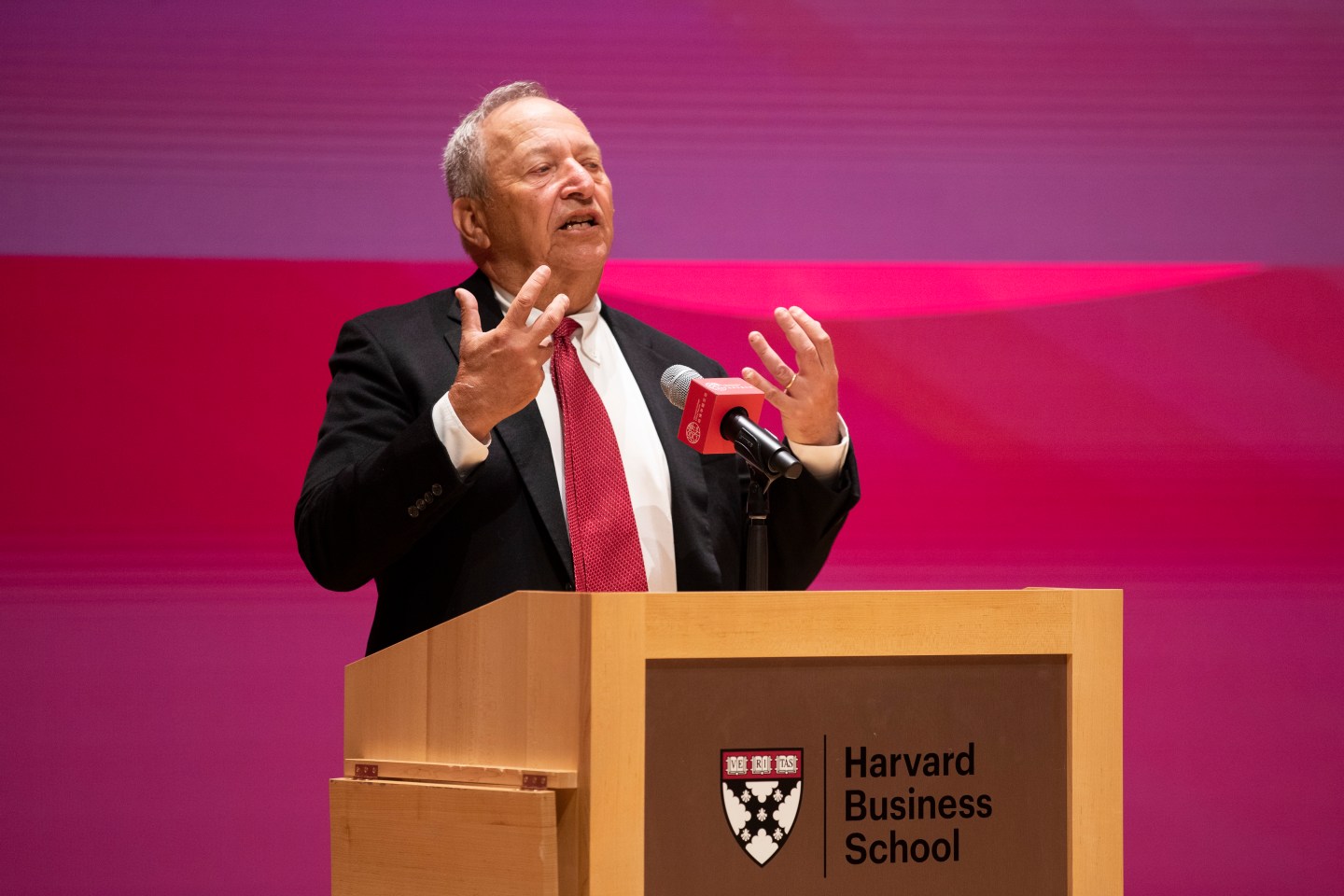 In attempts to get inflation under control, the latest interest rate increase by the U.S. central bank is 0.75%—for the third consecutive time. But some experts, like Harvard economics professor Larry Summers, warn the Fed’s actions are too little and possibly too late.

My Fortune colleague Shawn Tully’s new feature article recalls his day with Summers, the former treasury secretary under Bill Clinton, and former chief economic adviser to Barack Obama. Sitting in his living room in Brookline, Mass., in August, Summers confirmed, he was a key player in the home stretch of the passing of the Inflation Reduction Act that’s set to fund green energy investments among other forms of domestic spending. “I was quite involved in the politics in the late stages,” he told Tully. “I had the credibility to say that [this bill] would not be inflationary. Several senators encouraged me to deploy that credibility, and I did.”

But went it comes to Summers’ thoughts on how the Fed can get the U.S. economy out of its current unstable state: “He is, to say the least, not very upbeat,” Tully writes. “If we’re going to bring down inflation, you likely need a policy more restrictive than the policy that’s contemplated by the markets or the Fed,” Summers told Tully. “The Fed continues to be excessively optimistic.”

Tully writes: “As inflation remains worryingly high—clocking in at 8.3% in the latest August reading—a growing number of people in both camps [progressives and conservatives] now share Summers’ view that things are not, exactly, cool. For Summers, the greatest worry is that the Fed won’t have the resolve to raise rates high enough, and that the eventual cure will be far more costly than shouldering what could be a shorter, shallower downturn in the months ahead.”

Summers never believed inflation was transitory—just caused by COVID-related shutdowns and the supply-chain crunch. “For Summers, the chief source of today’s heavy inflation is over-the-top demand caused by too much money chasing too few goods,” Tully writes. “So to throttle a runaway consumer price index, the Fed must keep tightening monetary policy to the point where demand falls—sharply.”

Jerome Powell, chair of the Federal Reserve, said on Sept. 21 of the latest rate hike: “With today’s action, we have raised interest rates by 3 percentage points this year. At some point, as the stance of monetary policy tightens further, it will become appropriate to slow the pace of increases, while we assess how our cumulative policy adjustments are affecting the economy and inflation.”

But Summers thinks rates must go far higher than that to get the job done. How high? To find out, you can read more here in Tully’s complete article.

After posting record-high figures in Q1 of 2022, early-stage funding in information technology companies in the  U.S. and Canada slowed down in the second quarter, an S&P Global Market Intelligence report found. In the sector, the number of early funding transactions by private equity firms decreased to 384 in Q2, compared with 516 in the previous quarter. The sector raised $2.45 billion in Q1. "However, the number plummeted by 52% to $1.19 billion in the second quarter," according to the report. The research on early-stage funding includes pre-seed funding, seed funding, accelerator funding, crowdfunding, and angel investments.

"How Investors Value Firms’ Political or NGO Ties," an article in Wharton's business journal, analyzes research co-authored by Wharton’s Aline Gatignon, which captured investors’ immediate responses to “institutional transitions” such as anti-corruption investigations, as they show up in stock prices and in media reports. "Essentially, the study found that before the police raids, investors had favorable perceptions of companies with strong political connections. But after the raids, investors viewed those ties as unfavorable," according to the report.

Paul Carbone has resigned from his position of CFO at YETI Holdings, Inc. (NYSE: YETI), a global retailer of premium outdoor products, effective Oct. 28. Carbone will be returning to Boston to pursue a business opportunity that will allow him to be closer to family, according to the company. YETI and its board of directors have begun a search for a new CFO. Carbone will be supporting the transition before his departure.

Lara Stell was named CFO at mPulse Mobile, an A.I., and digital engagement solutions company serving the healthcare industry. Stell will be responsible for all financial and fiscal management aspects of company operations, providing leadership and coordination in strategic planning, accounting, finance, and administrative efforts of mPulse Mobile. Most recently, she served as CFO for GlobalTranz, which was acquired by a consortium led by CVC Capital Partners and concurrently combined with Worldwide Express. During her seven-year tenure at GlobalTranz, the company experienced significant growth in revenue and profitability, through both organic and acquisition strategies.

"I talk to business leaders and people in communities across the southeast. They are concerned, but they do still feel that there's a way to get to 2% in terms of inflation that will still leave them in a good place."

—Raphael Bostic, the president of the Federal Reserve Bank of Atlanta, said on CBS’ “Face The Nation” on Sunday.