‘An admission that his invasion is failing’: Why Putin’s nuclear threat and escalation in Ukraine are actually signs of weakness 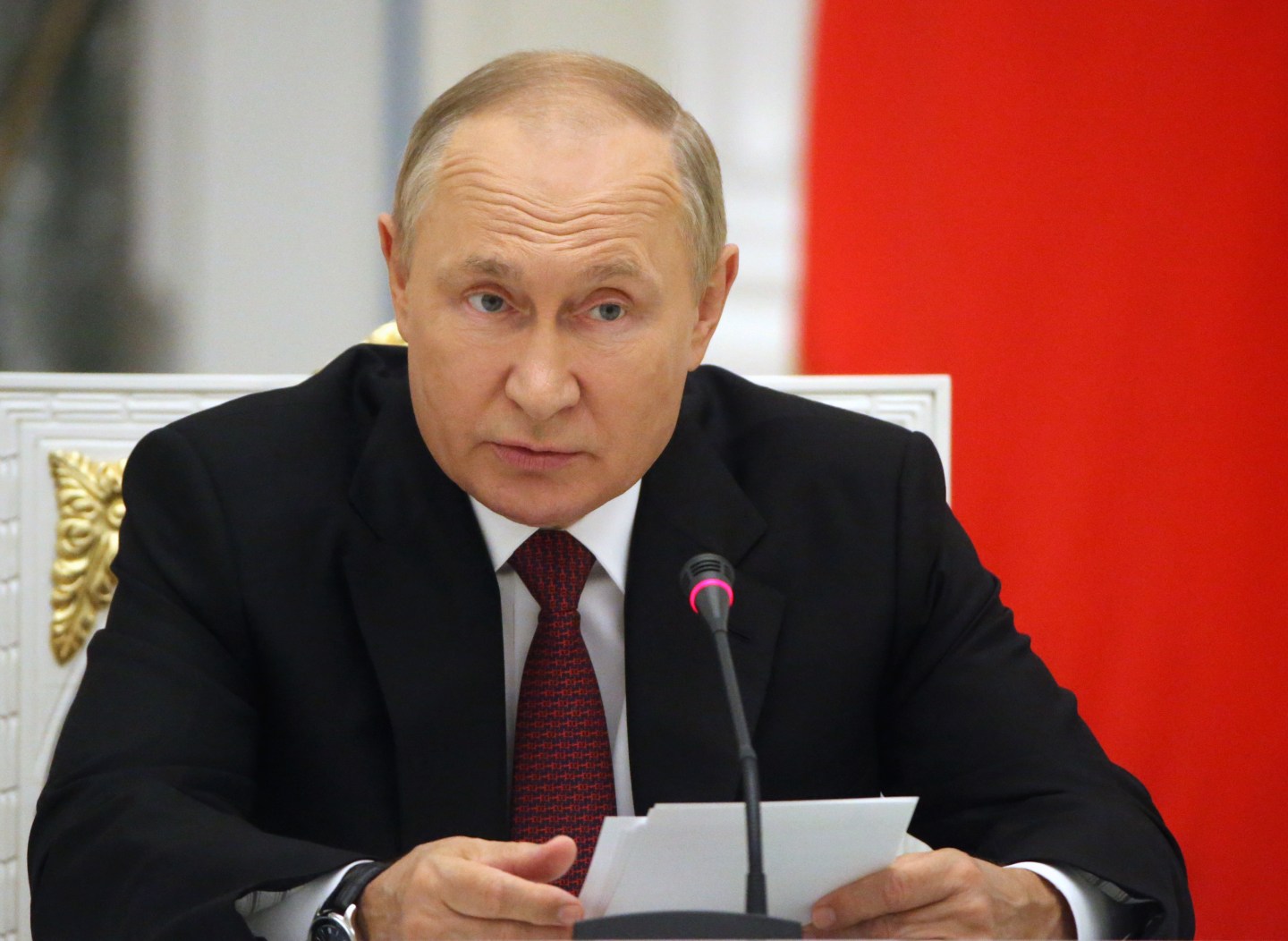 Russian President Vladimir Putin speaks during a meeting on the military-industrial complex at the Kremlin on Sept. 20, 2022.
Getty Images

Western governments have responded to Vladimir Putin’s partial mobilization of Russian troops with a mix of scorn and concern.

The Russian autocrat, whose future is looking shakier than ever following a surprisingly successful counteroffensive by Ukrainian forces, on Wednesday announced the drafting of up to 300,000 reservists. This falls short of a full wartime mobilization of the Russian population, but nonetheless marks both a major escalation and a significant U-turn from the Kremlin, which just a week ago denied planning any kind of mobilization.

The move comes days before a series of hurriedly planned referendums over Russian annexation in Ukrainian territories that have been seized by Russia, including Donetsk and Luhansk in the east, and Kherson and Zaporizhzhia in the south.

Putin also claimed Russia is “at war not only with Ukraine and the Ukrainian army, but with the collective West,” and raised the specter of nuclear war by warning NATO—which he alleged was contemplating nuclear strikes on Russia—that his country also has “many types of weapons of destruction.”

“President Putin’s breaking of his own promises not to mobilize parts of his population, and the illegal annexation of parts of Ukraine, are an admission that his invasion is failing,” said U.K. Defense Secretary Ben Wallace. “No amount of threats and propaganda can hide the fact that Ukraine is winning this war, the international community are united, and Russia is becoming a global pariah.”

The markets, adding fears of a prolonged Ukrainian war to preexisting jitters over Wednesday’s Federal Reserve decision on interest rates, fell in Asia—and briefly in Europe, too, before recovering losses. Both the pound and the euro slipped, sending the dollar to a two-decade high. Oil prices jumped 2%.

It is becoming ever clearer that this is a pivotal moment for Putin.

The success of the Ukrainian counteroffensive has triggered open discontent back home, notably from hawks who argue that Russia needs to go all in, if it is to have any chance of victory.

Russia has lost (by Western estimates) as many as 80,000 troops to death or injury in Ukraine. Moscow was forced to scrap the upper age limit of 40 for contractual service in the army, and its newly-assembled 3rd Army Corps reportedly had an inauspicious start this month in the Kharkiv region, which Ukraine has now fully liberated.

On top of that, the notorious Russian paramilitary company known as the Wagner Group has been actively recruiting convicts in an attempt to shore up manpower in Ukraine. It is not clear how successful that recruitment drive has been, but it betrays Russian desperation.

On the other hand, mobilization risks shattering the complacency with which much of the Russian population appears to be treating the war—it’s a lot easier to treat the conflict as something that’s happening far away if your own sons are not being pressed into fighting there.

“The tyrant finally launched the processes that will bury him in his country,” said Kyiv Mayor Vitali Klitschko.

Russia’s potential annexation of eastern and southern Ukrainian territories—which would go unrecognized by most of the world—could yet lead to full mobilization. The implicit threat is that if and when Kyiv tries to retake these regions, that would constitute an attack on Russian soil, which might in turn trigger an escalated response that could be sold to Russians as defensive in nature.

Domestic concerns aside, Putin also faces growing pressure from countries that have acted as tentative allies during the war—not quite backing his invasion of Ukraine, but not speaking out against it either.

Last week, at a regional summit in the ancient Uzbek city of Samarkand, Indian Prime Minister Narendra Modi openly upbraided his Russian counterpart. “I know that today’s era is not an era of war, and I have spoken to you on the phone about this,” Modi told Putin on live TV, prompting Putin to insist he was doing everything he could to put an end to the conflict.

Putin also acknowledged at the summit that China’s President Xi Jinping had raised “questions and concern” about the situation.

Meanwhile, there are multiple signs that Russia’s influence over its weaker neighbors is also dissipating.

Kazakhstan this week began cracking down on Russian and Belarusian freight shippers who were using Kazakh trucks to sneak their loads into the EU, in contravention of sanctions.

Days before, in Samarkand, President Xi gave what appeared to be a lightly coded warning to Putin, saying that China will “resolutely support Kazakhstan in the defense of its independence, sovereignty and territorial integrity…[and] categorically come out against interference by any forces in the internal affairs of your country.”

And in the South Caucasus, experts have attributed the recent flare-up of a decades-old conflict between Armenia and Azerbaijan to Moscow’s current weakness. That situation centers on a disputed territory called Nagorno-Karabakh, which is part of Azerbaijan but is occupied by ethnic Armenian forces.

Azerbaijan, which has strong relations with NATO member Turkey, attacked Armenia a couple of weeks ago. That prompted the latter country to appeal to the Moscow-dominated Collective Security Treaty Organization, of which Armenia is a member, for help. But Putin merely called on both sides to “exercise restraint.”

There is now a growing debate in Armenia about whether it’s worth being a Russian ally.