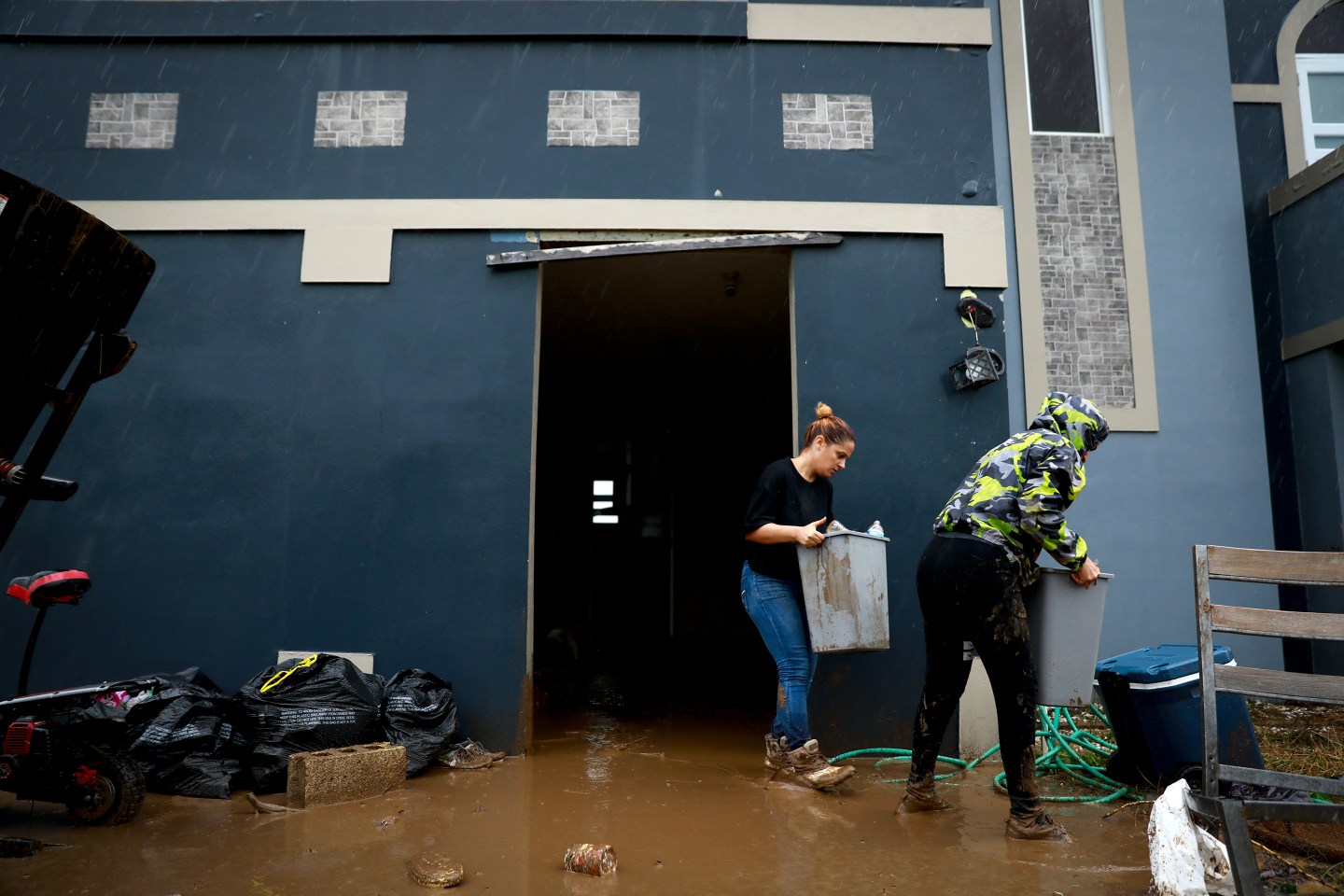 Members of the Nevares remove the mud from their home after La Plata river overflooded and their two-story house was almost completely submerged on September 19, 2022 in Cayey, Puerto Rico.
Jose Jimenez—Getty Images

Hurricane Fiona struck the coast of Puerto Rico on Monday with torrential rains and catastrophic mudslides, causing the entire island to lose power as the category 3 storm flooded the island.

The lack of power plus turbid water at filtration plants cut off water service for more two-thirds of the island. Murky waters flooded the streets, seeping into homes and completely covering a runway in southern Puerto Rico. At least two people have died in the storm, Gov. Pedro Pierluisi told CNN.

The total amount of damage to the island is still unclear. Pierluisi stressed that officials are still in the rescue and response phase, and will begin to assess the scale of the damage once the island is on the path to recovery.

But Pierluisi added that the government response to Hurricane Fiona so far has been better than it was five years ago, when Puerto Rico was struck by both category 5 Hurricane Irma and category 4 Hurricane Maria. They became one of the deadliest natural disasters in over a century, causing billions of dollars in damages and killing nearly 3,000 people.

“We are much better prepared now than Puerto Rico was five years ago when we got hit by Hurricane Maria,” Pierluisi told CNN.

As of last month, the Federal Emergency Management Agency awarded over $32 billion in funding for recovery projects for the 2017 storms. Many areas of Puerto Rico are still fragile from Irma and Maria—nearly 3,000 residences only have partial repairs completed on their homes, making them much more susceptible to flooding from the heavy rainfalls. Hurricane Fiona has only exacerbated the damage.

Here are some organizations that are providing aid for flood victims in Puerto Rico.

The female-led nonprofit is coordinating hurricane relief in the form of non-perishable food, toiletries, diapers, gallons of water, and more. Cash donations are also accepted through PayPal or on its website.

PRxPR Relief and Rebuild fund launched five years ago when Hurricanes Maria and Irma hit Puerto Rico. Business leaders in the U.S. and local organizations work together to help rebuild the infrastructure and provide disaster relief to the island. The organization is implementing its disaster aid protocol and is requesting monetary donations at this time.

The nonprofit works to provide aid to Latino communities across the U.S. and is already on the ground in Puerto Rico. The organization provides emergency relief services and essential supplies to the island. Monetary donations can be made directly to the nonprofit, or communities can host their own fundraisers to encourage their friends and family to donate to the Puerto Rico Disaster Relief Fund.

The nonprofit launched the Hurricane Fiona Relief Fund with a goal of raising $1 million to help residents on the island and other communities who have been impacted by the storm. The website states the funds will be used to deliver food and emergency medical supplies, shelter, clean water, and hygiene products to those impacted.

The IRS announced today that victims of Hurricane Fiona in Puerto Rico will qualify for tax relief. Those impacted now have until February 15, 2023 to file their individual and business tax returns and make tax payments. The IRS disaster relief page has details on other returns, payments, and tax-related questions.