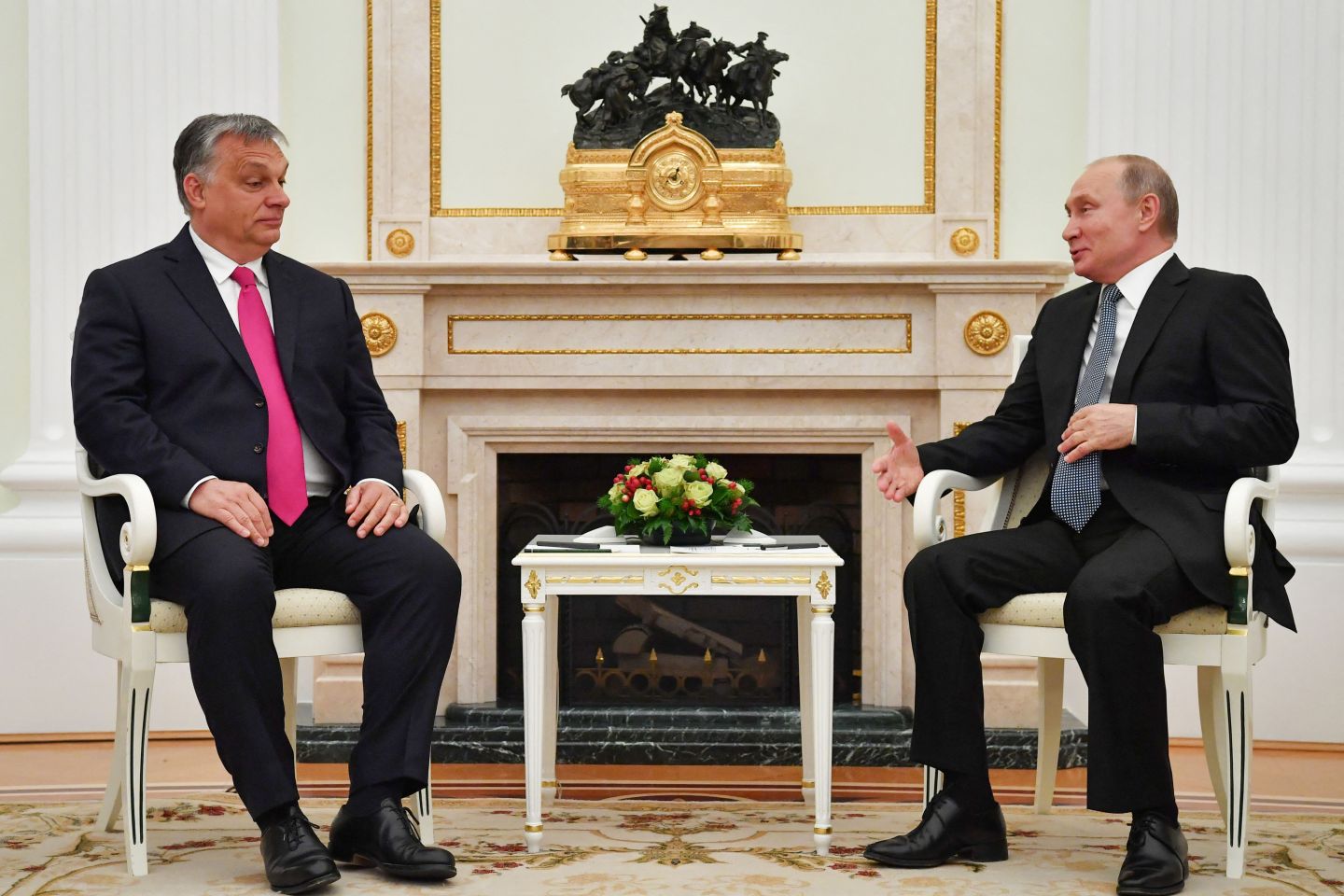 The EU is accusing one of Putin's closest European allies of democratic backsliding.
YURI KADOBNOV/POOL/AFP via Getty Images

The European Union is moving to cut off funds to Hungary after accusing its leader, prime minister Viktor Orbán, of eroding the country’s democracy and ruling as an autocrat, further isolating one of the continent’s last Putin supporters.

The southeastern European country of Hungary, which has been led since 2010 by Prime Minister Viktor Orbán, may have to forgo as much as €7.5 billion in funds from the European Union, which is accusing the country’s leaders of democratic backpedaling and corruption.

Lawmakers say that Orbán’s history of anti-democratic governance in Hungary, which EU lawmakers said last week could no longer be considered a “full democracy,” is concerning enough to cut the country off from the EU’s €1.2 trillion ($1.2 trillion) shared budget.

On Sunday, the European Commission announced that lawmakers had proposed “budget protection measures” that would severely limit funding to Hungary under the current EU budget regime. If it goes through, it will be the first time the EU enacts a 2020 law designed to protect the bloc’s budget from being “misused by EU governments who bend the rule of law.”

But beyond that, it would be the latest effort in democratizing Hungary after years under Orbán, a man who has opposed more aggressive Western sanctions against Russia, has been called Vladimir Putin’s Trojan Horse within the EU, and has implemented policies ranging from banning the dissemination of LGBTQ-related content in schools to blocking Muslim immigrants at the border.

Moving to cut off Hungary from EU funding is the latest effort by democratic Europe to limit the spread of authoritarianism and democratic erosion on the continent.

The law was implemented in response to criticisms that EU budgets were being used to help support populist and increasingly authoritarian regimes in portions of Eastern Europe.

But after years of right-wing turns by the Hungarian government, what was once a joke is now becoming a growing concern for Europe’s leaders.

In his 12 years in charge of Hungary, Orbán—who also served as Prime Minister between 1998 and 2002—has taken control of the country’s independent media outlets, illegally forced hundreds of judges to retire, changed the country’s voting laws, and openly endorsed discriminatory rhetoric against the LGBTQ community and immigrants.

Orbán’s behavior—as well as rumors of corruption linked to members of Fidesz, his ruling party—have pushed the EU to consider limiting how much the bloc actually funds his government.

“It’s about breaches of the rule of law compromising the use and management of EU funds,” EU Budget Commissioner Johannes Hahn said of the proposed measures. “We cannot conclude that the EU budget is sufficiently protected.”

The European Commission now has up to three months to decide on whether to cut Hungary off from the bloc’s budget. Within that time, Hungary will have to implement reforms that make its legislative process more transparent and set up an effective system of anti-corruption watchdogs if it wants to keep receiving EU money.

In the past 12 years he has been in power, Orbán has remained close with Putin.

Since returning for his second stint as prime minister in 2010, Orbán’s style of governance has been remarkably similar to how Putin has ruled Russia in the past two decades. Both governments have employed coercive means to censor the media, and both leaders have created support for themselves through oligarchs—wealthy industry leaders planted in the upper levels of government.

The two leaders have backed each other on multiple occasions. Orbán publicly disapproved of EU sanctions against Russia following its annexation of Crimea in 2014, and last April, Putin hailed Orbán victory in Hungary’s most recent general elections.

Hungary’s economy is deeply tied to the EU’s, the destination of nearly 80% of its exports. It also remains highly dependent on Russia for its energy use, importing 65% of its oil and 80% of its natural gas from Russia, significantly more than other European nations. Maintaining Hungary’s link with Russian energy has been called central to Orbán and Fidesz’s hopes of staying in power.

Orbán has been a useful ally to Putin since Russia invaded Ukraine earlier this year. The Hungarian leader has been vocal in the EU when Russia-related sanctions have come up, delaying progress on the EU’s long-awaited Russian oil ban and repeatedly threatening to derail sanctions packages, with no signs that he will stop doing so anytime soon.

In response to the EU’s decision on Sunday, Orbán’s Fidesz party sought to discredit the bloc for singling Hungary out for blame instead of focusing on the continent’s mounting energy crisis, caused in large part by Putin’s willingness to use energy imports as blackmail in an effort to have Western sanctions lifted.

“It is astounding that even in the current crisis the leftist majority of the European Parliament keeps busy only with attacking Hungary,” Fidesz said in a statement last week.

“The left in Brussels want to punish Hungary over and over again and withhold the funds due to our country.”