The Queen’s death is big business—mourning wristbands are going for $80,000 on EBay 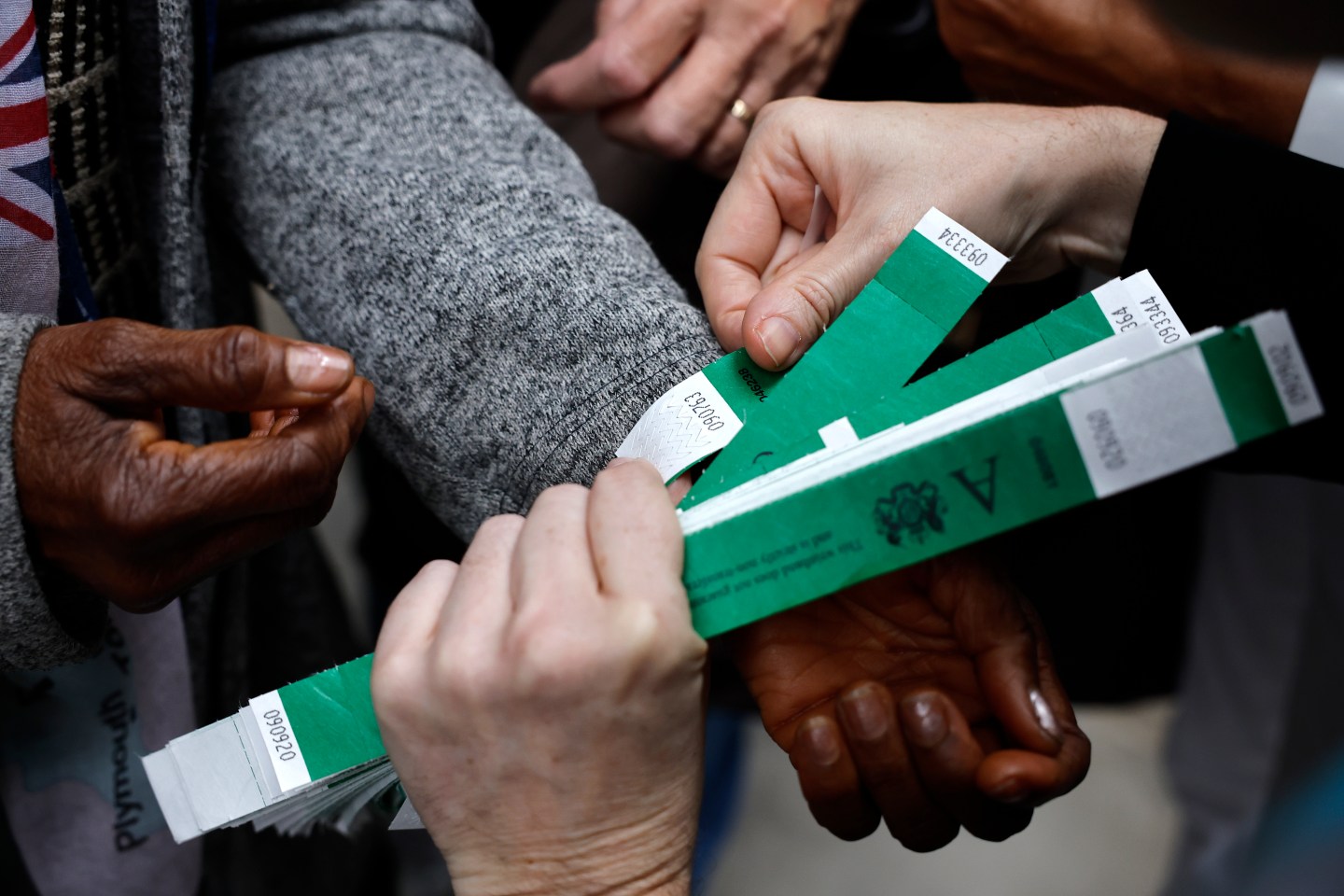 People put on wristbands that indicate their place in line along Shad Thames in London while waiting in line to pay their respects to Queen Elizabeth II.
Chip Somodevilla—Getty Images

Wristbands for the queue to see Queen Elizabeth II’s coffin in London are continuing to sell for thousands of pounds despite eBay vowing to remove listings of the items.

Hundreds of thousands are thought to have made the pilgrimage to the U.K. capital to see the Queen’s coffin at Westminster Hall, where it was lying in state for several days ahead of the late monarch’s funeral on Monday.

Those joining the queue to enter the Hall and pay their respects to the late monarch were given wristbands as “a record of when [they] joined the queue.”

The wristbands, issued by the U.K. government’s Department for Digital, Culture, Media and Sport, came in different colors each day.

According to eBay’s record of sold listings, several used wristbands have been sold in recent days. One was sold on Monday morning for £45,100 ($51,323), according to the records, while others were also sold for tens of thousands of pounds.

It is unclear whether all of the items sold for this amount or if they were removed by eBay’s moderators before the sales could complete.

However, one of the wristbands that the records said sold for £25,000 on Monday was actually removed by eBay, and no payment had been made for the item, the company confirmed.

“These items are against our policies and we are removing them from our site,” an eBay spokesperson told Fortune on Monday.

There were still a number of listings for the wristbands active on the online auction site during the Queen’s funeral.

One of them, seen by Fortune, advertised an “unbroken” wristband for the lying-in-state queue, and had attracted bids up to £55,100 ($62,700) by around midday in London on Monday. It soon appeared to have been removed from the site.

Another wristband listing, which has also since been removed, had racked up multiple bids that priced it at more than £40,000.

Earlier, the Guardian reported that some listings had attracted bids as high as £70,000 ($79,700) before being removed.

Wristbands given to members of the public in the queue for Queen Elizabeth II’s lying-in-state are being listed on eBay for tens of thousands of pounds.
Laura Zapata/Bloomberg via Getty Images

eBay’s policies prohibit the sale of most event tickets—including those for concerts, festivals, sports matches, and theater shows. The rules generally apply to events which are free to attend, like the Queen’s lying-in-state.

Some sellers have tried to find ways around the policy.

One person selling a wristband with an asking price of £14,000 preempted the delisting of their “rare” offering.

“This might be taken down by eBay,” they said, before disclosing their email address and phone number.

“If you are interested email… and we can arrange this sale another way,” the seller added.

Many of the listings advertising wristbands from the lying-in-state queue have touted the items as memorabilia or souvenirs rather than tickets.

People are also using eBay to cash in on other items that have marked the Queen’s death and lying-in-state, including newspapers and posters displayed on London’s public transport networks—although the amounts being sought for these are much lower than the wristbands’ asking prices.