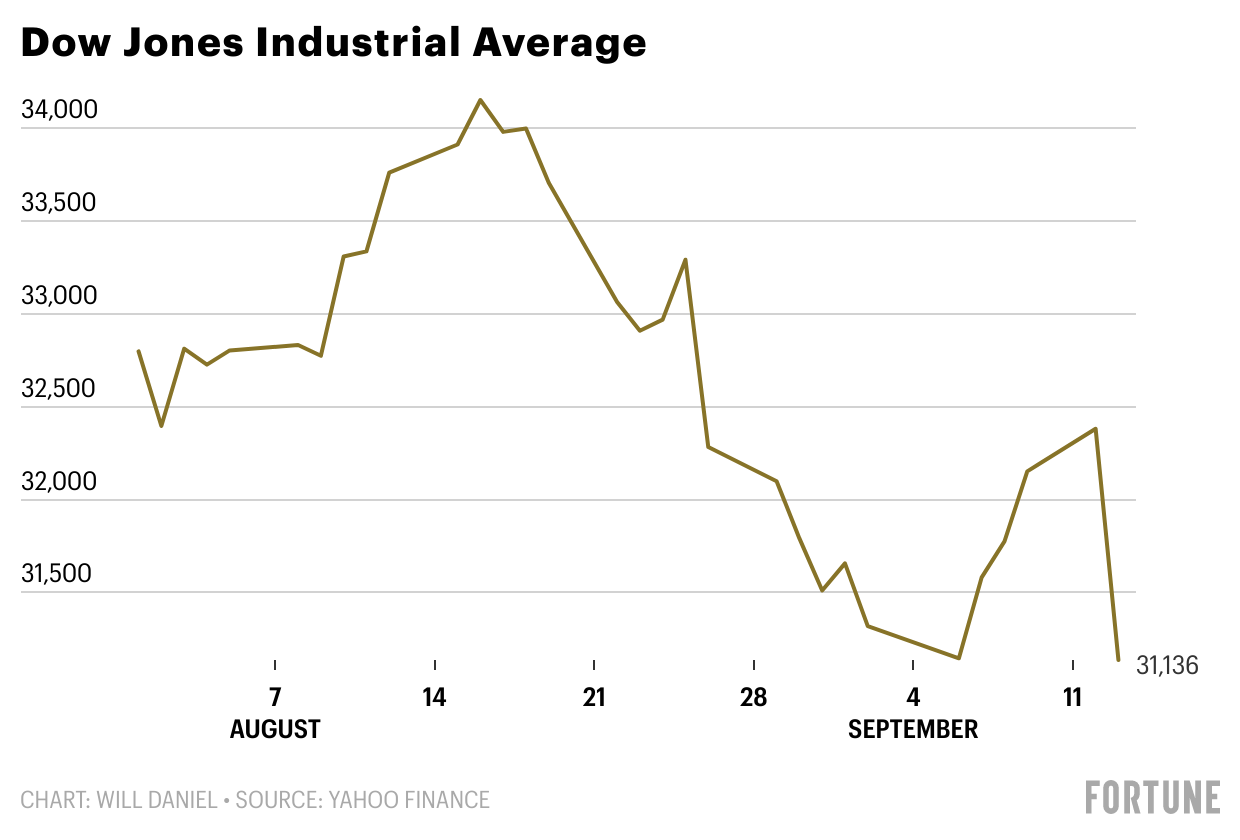 Stocks plunged on Tuesday as fears that the Federal Reserve will ultimately spark a recession spread like wildfire after a hotter-than-expected inflation print.

The Fed has raised interest rates four times this year in an attempt to cool rising consumer prices, with Fed Chair Jerome Powell saying that his inflation fight is “unconditional” and rate hikes will continue even if it means some “pain” for Americans.

But despite Powell’s efforts, inflation, as measured by the Consumer Price Index (CPI), rose by 0.1% in August, and 8.3% compared to the same period a year ago, the Bureau of Labor Statistics revealed on Tuesday.

The Dow Jones Industrial Average fell 1276 points (or 3.94%) to 31,104 after the inflation data went public, as experts were quick to sound the alarm about the rising potential for a Fed-induced recession.

“The Fed has the worst problem in the world,” Chris Zaccarelli, Independent Advisor Alliance’s chief investment officer, told Fortune, arguing that the central bank will be forced to continue raising rates and shrinking its balance sheet even as the economy slows, which will bring a distinct rise in unemployment.

“It’s a political problem, not an economic problem—and the only cure for the current crisis is one that is politically infeasible,” he said. “If the Fed thought they were criticized too much by the previous administration, and they were, wait until they see the type of criticism they will be under as they deliberately create an economic scenario where unemployment jumps significantly.”

Zaccarelli sounded worried about what comes next: “Not only are they going to end up causing a recession, but it is going to be a bad one.”

He isn’t the only economic expert warning Americans about the coming Fed-induced “pain.”

ZipRecruiter’s lead economist, Sinem Buber, told Fortune that the rise in core inflation in August, which excludes volatile food and energy prices, was a worrying sign.

“The real action in the report—the focus of the Fed’s attention, and the figure most synonymous with future inflation—is core inflation. And that delivered a shock, rising 0.6% in August to 6.3% over the year,” she said. “That suggests the Fed may have to hold rates higher for longer to tame inflation, with greater pain for the housing market and labor market along the way.”

The rise in core inflation, in particular, likely puts the Fed’s goal of a “soft landing”—where inflation is controlled without sparking a recession—out of reach, according to EY-Parthenon’s chief economist Gregory Daco.

“Inflation remains broad-based, and the sequential momentum for core CPI portends to only a very gradual easing of inflationary dynamics,” Daco told Fortune. “In the context of this global central bank tightening cycle, higher and more persistent inflationary pressures increase the risk of a hard landing.”

And for investors, the hot inflation reading means stocks will continue to face pressure as rising rates increase the cost of borrowing and lower market valuations.

“Unfortunately for markets, this print will reinforce the need for the Fed to remain aggressive and will likely keep a lid on risk assets over the foreseeable future,” Cliff Hodge, chief investment officer for Cornerstone Wealth, told Fortune.

The good, the bad, and the ugly

Of course, the latest CPI report wasn’t all bad. Overall energy prices dipped 5% in August, owing to a 10.6% monthly drop in gasoline prices. And used car prices also fell 0.1% last month, after surging throughout the pandemic.

However, taken as a whole, the latest inflation report wasn’t what Wall Street was hoping for. Some 70% of the categories that make up the consumer price index saw annual price increases of more than 4% month over month in August. And although gas prices have dropped sharply since June, experts say energy price relief may not last.

Jeffrey Roach, LPL Financial’s chief economist, told Fortune that he fears rising electricity and natural gas prices this winter will end up erasing much of the savings Americans earned from falling gas prices in recent weeks.

Roach also argued that rising food costs are a “growing concern.” Food prices rose 11.4% from a year ago in August, the largest year-over-year jump since 1979.

While rising prices at the grocery store are worrying economists, their main concern seems to be shelter inflation. Overall shelter prices rose 0.7% in August, and 6.2% year over year.

While that may not seem like a lot, it’s a critical statistic, because shelter prices make up over 32% of the consumer price index, of which roughly 8% is rent prices and some 24% is owner’s equivalent rent (OER)—which is determined by a monthly survey that asks consumers who own a primary residence how much they would pay to rent instead of own their home.

Liz Ann Sonders, the chief investment strategist at Charles Schwab, noted in a Tuesday tweet that the OER portion of August’s CPI reading showed a 6.3% year-over-year jump. That’s the fastest increase since April 1986.

“The housing sector is critical as it represents almost a third of total CPI and is likely to be a consistent contributor to inflation, as rents are sticky and are slowly reflected in CPI through surveys that have significant lags in reporting,” Jay Hatfield, the CIO of Infrastructure Capital Advisors, told Fortune.

However, Hatfield argues the Fed’s policies of raising interest rates and shrinking its balance sheet, thereby reducing the money supply, will eventually work to control inflation.

“We continue to be optimistic that inflation will steadily decline over the next six months as the Fed’s 15% reduction in the money supply produces a very strong dollar and slows the housing sector through dramatically higher mortgage rates,” Hatfield said.

Bank of America economists, led by chief U.S. economist Michael Gapen, aren’t as optimistic about the timing, arguing that true price stability won’t come until 2024 in a Tuesday research note. And, like most of their peers, the BofA team are also concerned about the rising possibility of a “hard landing” for the U.S. economy.