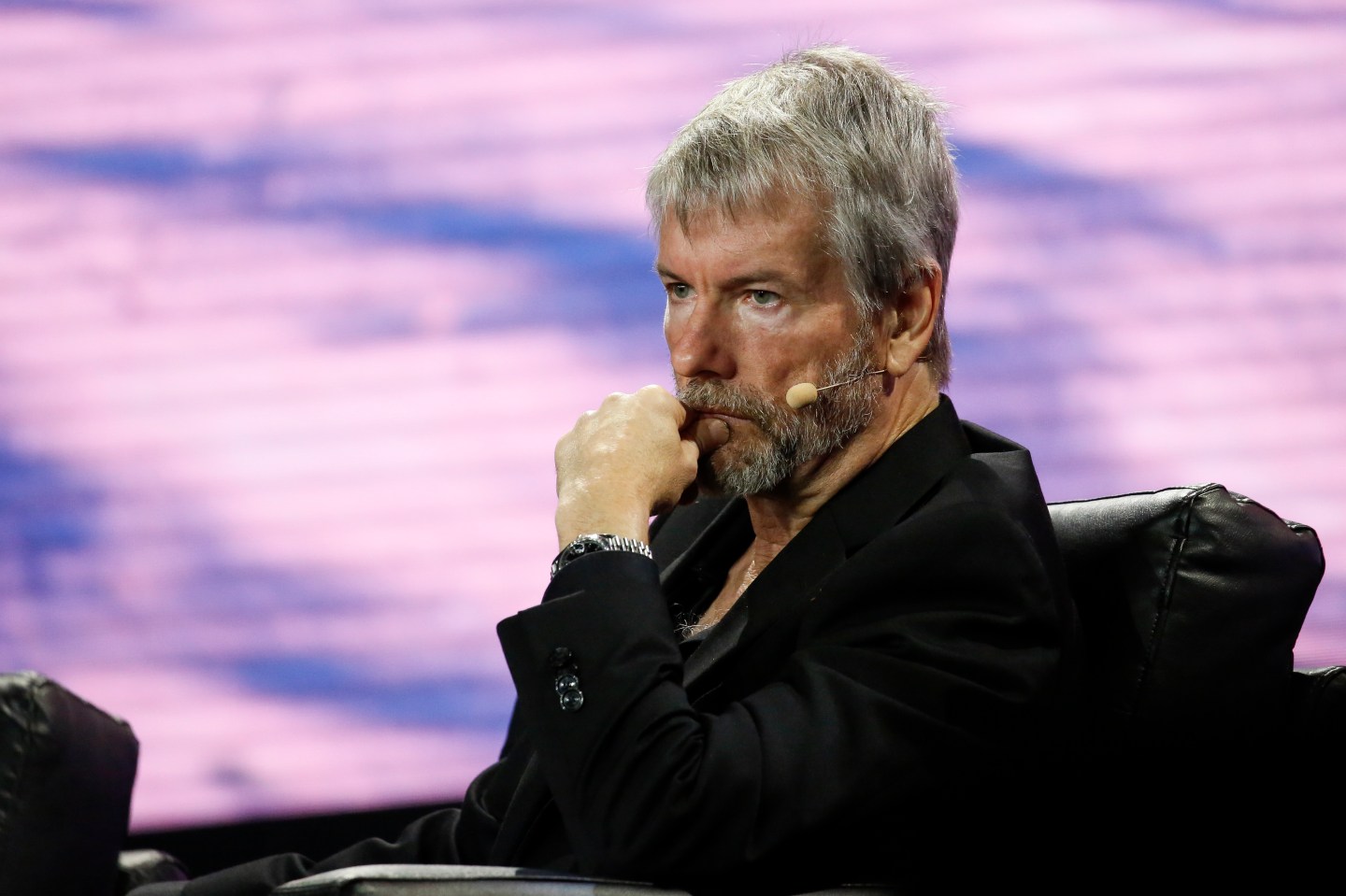 Michael Saylor has a $25 million tax suit on his hands.
Marco Bello/Getty Images

On August 31, the District of Columbia famously filed a civil suit accusing Michael Saylor, Bitcoin’s chief proselytizer, of cheating the District out of $25 million in taxes. So far, the revelations in the action haven’t dented the flagship cryptocurrency’s price. But they present a fascinating picture of how the flamboyant promoter so revered and influential in cryptocurrency circles allegedly behaved as a conman so delighted with his scams that he couldn’t resist bragging about them, the weakness that appears to have proved his undoing.

According to the suits, Saylor mocked other well-to-do folks who paid taxes in the District as “fools,” and exhorted friends to follow his example. Most shocking, Saylor stands accused of recruiting his lieutenants at MicroStrategy to conspire in an intricate plan for orchestrating the fraud. And Saylor so intimidated the brass at the data analytics pioneer that they bowed to the boss, knowing full well he was blatantly skirting millions in taxes, and putting the enterprise he founded at risk. (For Fortune’s full look at Michael Saylor’s wild career and massive bet on Bitcoin, read the full story here.)

The District case arises from an earlier complaint filed by a whistleblower. The District has long deployed a False Claims Act to pursue, for example, contractors who over-bill or fail to complete construction projects. In 2021, the District updated the law allowing private citizens to bring suits, with DC as co-plaintiff, against “high-earning companies and individuals” for tax evasion. In August of 2021, the whistleblower filed the first case accusing Taylor of illegally skirting $25 million in payments. The suit was sealed and remained secret until the District issued a separate action, including virtually the same charges, on the last day of August.

It’s clear that the whistleblower saw a great deal of Michael Saylor, and given the knowledge of the jockeying inside of MicroStrategy, might well have been a high-ranking executive. In fact, the whistleblower’s account is astoundingly detailed. It alleges that Saylor lived in DC most of the year from 2013 to 2020, but claimed residence in the no-income-tax state of Florida. The document is full of fun nuggets that illustrate Saylor’s attachment to the nation’s capital: How Saylor combined three luxury apartments on the Georgetown waterfront to create the 7,000 square foot penthouse he dubs Trigate, and where he really resided most of the time, the yacht and backup craft he docked in front of the abode, his regular appearances at a premier place to see and be seen, Cafe Milano, and his addiction to flying the world in MicroStrategy’s Bombardier Global Express private jet, for which the FAA maintains flight records that provide “an almost perfect representation of Saylor’s travel to and from the District” for the past two decades.

The complaint recounts that in 2012, Saylor purchased a bayfront Mediterranean mansion in Miami Beach called Villa Vecchia for $13.1 million. Shortly thereafter, he got a driver’s license and registered to vote in the Florida, and began filing his taxes in the Sunshine State, while spending most of his time in DC, commuting to MicroStrategy’s headquarters in Tyson Corner, Va and “indulg[ing] in the District’s social scene.” Adds the complaint, “He even suggested that his friends from New York, California, or the District, were ‘fools’ if they did not evade the personal income taxes imposed by their respective states by similarly acquiring a house in Florida and spending time there.”

The whistleblower dug deep to establish that Saylor spent relatively little time in Florida, and most of the year ensconced at Trigate. Saylor, he asserts, voted in only three general elections in Florida, each time by absentee ballots mailed from his corporate offices in Virginia. As evidence Saylor wasn’t relocating, the District’s suit reproduces Saylor’s social media posts from 2012, after he claimed residence in Florida. In them, he proudly displays on Facebook photos of his Georgetown pleasure dome in the final stages of unifying the neighboring units into sumptuous Trigate. In the captions, Taylor extolls “my future home” and laments “how hard” it is to leave the abode on a gorgeous fall morning.

The whistleblower suit assembles evidence from the social media posts, FAA flight data, and most intriguingly, “witness accounts from his inner circle,” to show the number of days that Saylor spent in Florida and DC respectively from 2013 to 2019. Under DC law, time on business or leisure travel where someone is simply going back and forth to the District doesn’t count as days away for tax purposes—as in claiming you’re out of DC half the year away, and hence don’t owe levies there. The complaint charges that from 2014 to 2019, Saylor resided between 270 and 331 days in DC, including trips to and from the District. In no year did he spend more than 71 days in Florida. So Saylor doesn’t come close to qualifying for the 183 days in Florida it would require to qualify as a resident in the state. Tracking his movement establishes that he was physically present in DC, or jetting in and out, the majority of days. The only exception was 2012. But even then, Saylor logged 70 more days in DC than Florida, meaning he owed taxes in the district that year, too.

The suits are demanding big payments from Saylor

The District suit alleges that Saylor effectively forged a devil’s pact with MicroStrategy to perpetuate the fraud. It charges that in 2014, the CFO counted the days Saylor was present in DC and Florida, and established that the boss was really living in the District. For years, MicroStrategy had been reporting his home to federal officials as Florida, including on the CEO’s W-2. The CFO (who is not identified by name) told Saylor that he could no longer “justify” misrepresenting Saylor’s true residency. “The CFO brought the issue of Saylor’s fraudulent tax evasion to Saylor as a potential source of liability for the company,” reads the complaint.

Saylor didn’t mollify his CFO by agreeing to have MicroStrategy declare his true residence. Instead, according to the suit, he crafted a strategy to engage the company’s assistance in concealing the fraud. Going forward, he agreed to accept a nominal salary of $1 a year. Such an arrangement, the strategy went, reduced the likelihood of attracting the DC tax authorities. At the same time, MicroStrategy substantially increased the perks awarded Saylor for personal air travel, use of a car and driver, and a security detail. The company covered the federal taxes owed on these benefits. That no salary but more perks in exchange for the risk of misreporting Saylor’s tax situation assuaged the CFO. The complaint also alleges that the chairs of the comp and audit committees approved the deal.

Normally, these non-cash items would be considered compensation, and fully taxable, in the District. But as Saylor was claiming Florida residency, the perks weren’t reported in DC. Apparently, Saylor and the CFO believed that using fringes in lieu of cash would ensure that the scheme go undetected. According to the complaint, “the agreement [aided] Defendant Saylor’s fraudulent avoidance of his obligation to pay District taxes by cloaking his perpetual non-payment of District taxes.”

The District’s action goes further. It asserts that Saylor wrongly claimed to be a Virginia resident for years prior to switching to Florida. The AG demands $25 million in back taxes from Saylor, 10% annual interest, and assorted penalties. The new fraud statute also carries treble damages, meaning that if he loses, Saylor must pay triple the amount of back taxes, interest and penalties. The complaint doesn’t give a number for the total Saylor owes. The suit is also seeking unspecified amounts from MicroStrategy. In the press release from August 31, the AG states that resolving the charges would cost Saylor and the company combined around $100 million. Naturally, the heaviest weight by far would fall on Saylor; treble damages on the back taxes alone would amount to $75 million.

If the District wins the suit, the Whistleblower—apparently a first-hand witness to Saylor’s crowing over his cleverness—would receive as much as 25% of the amount paid by Saylor and MicroStrategy, or around $25 million.

In response to the suit, Saylor issued a statement declaring, “A decade ago, I bought an historic house in Miami Beach and moved my home there from Virginia. Although MicroStrategy is based in Virginia, Florida is where I live, vote, and have reported for jury duty, and it is at the center of my personal and family life. I respectfully disagree with the position of the District of Columbia, and look forward to a fair resolution in the courts.”

Since news of the suit broke, MicroStrategy’s stock has tumbled from $245 a share to $217 as of mid-afternoon on September 2, a decline of almost 9%. But that’s actually not terrible given its Bitcoin misadventure and weak fundamentals. In its second quarter report released on August 2, the company booked a staggering operating loss of $918 million. That included a $903 million impairment charge from its trove of almost 130,000 Bitcoin. Most troubling, however, is that the underlying software platform is now losing money. Its puny operating profit is overwhelmed by the interest payments on the gigantic, $2.4 billion in debt amassed to buy Bitcoin. The performance was so dreadful that Saylor stepped down as CEO to become executive chairman, tasked mainly with heading the Bitcoin acquisition strategy.

Overall, MicroStrategy has spent $4 billion—financed by both new equity and debt—on Bitcoin that today sells at just under $20,000 a coin, making the company’s war chest worth under $2.6 billion. So Saylor’s lost $1.4 billion in his crypto gamble. Today, its holdings are valued at just $200 million more than the $2.4 billion in loans on bonds that funded the buying. Those credits start coming due in 2025. “Saylor’s only hope is that Bitcoin’s price keeps going up so that he can repay the debt,” says Ryan Ballentine of Bireme Capital, a firm that’s shorting MicroStrategy. He puts the company’s value at just a couple of hundred million dollars. It’s hard to argue with his analysis: The net value of its Bitcoin holdings is less than $200 million, and the software business is taking losses, and hence shows little or no worth as a future money-maker, given that the $40 million in annual interest on the Bitcoin debt would wipe out even positive operating profits. Plus, Taylor has made the stock far riskier by imposing gigantic leverage, and betting the company on the wager that Bitcoin’s price will soar, while it’s spent months in steep decline.

The miracle is that despite the hit from the lawsuit, MicroStrategy is sporting a super-inflated market cap of $2.5 billion. In mid-August, it was selling for an incredible $4 billion. Even now, I reckon that the company’s commanding a multiple of its true value as a profit-making enterprise. So why is it defying gravity? Put simply, MicroStrategy is a meme stock—and thanks to Saylor’s cult following a durable one at that. So far, the suit hasn’t destroyed that following. But Saylor’s made a once-healthy enterprise a proxy for the riskiest major investment vehicle in history. Soon, the revelation may take hold that the prophet who once looked like a seer in promoting Bitcoin is really the same carnival barker who allegedly cheated on his taxes while reckoning he was too invincible to get caught, then fell off the stage by boasting about it to a whistleblower. The markets could soon blow the whistle on MicroStrategy as well.