‘We’re gonna stay here as long as it takes’: Meet the Boston baristas leading the longest strike in Starbucks history 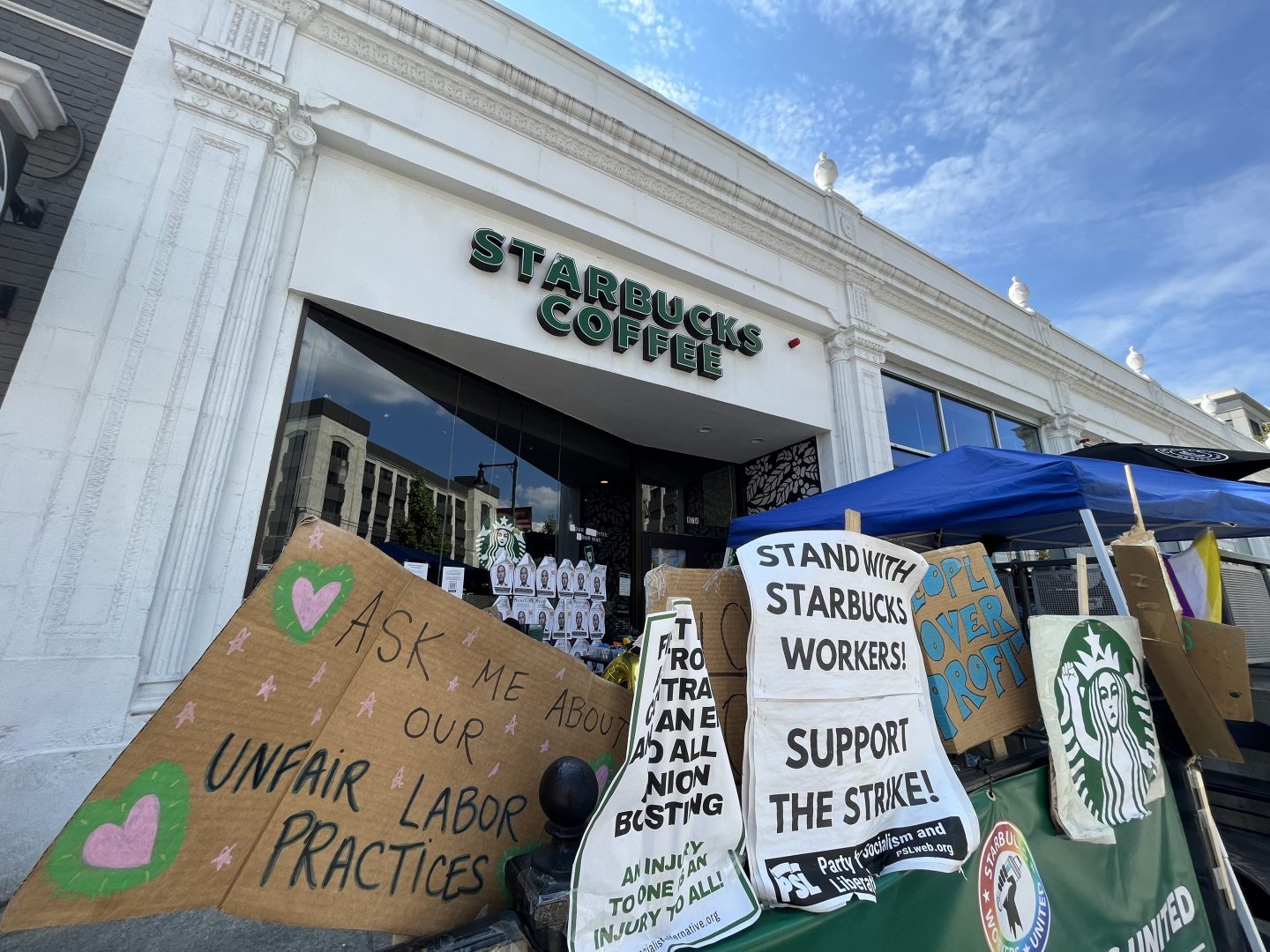 A strike has kept the Starbucks store on the Boston University campus shuttered for 45 days as of Aug. 31.
Xinyan Fu—Fortune

That’s what the ground operations look like at 874 Commonwealth Ave., a Boston Starbucks location that’s currently leading the longest strike in the company’s history. The strike has kept the store shuttered for 45 days as of Aug. 31.

“The bottom line is, we’re gonna stay here as long as it takes,” says Isabel Beaudry, a recent graduate of the Berklee College of Music who has worked at the location for nine months.

To understand the strike, you have to understand what happened when Starbucks appointed a new store manager, Tomi Chorlian, shortly after workers there voted to unionize, Topaz Leo, a barista who has worked at the store for a year, tells Fortune.

Chorlian began cutting hours for certain staff and even told the shift manager to fire anyone who wanted to work for more than 18 hours per week. But employees need to work at least 20 hours per week to be eligible for benefits at Starbucks, Leo says.

Some of the store’s union-affiliated employees, including Beaudry, have taken to couch surfing in the Boston area because they can’t afford their rent after so many hours were cut back, according to Leo.

In the letter announcing the strike on July 18, store employees claimed they experienced a series of unfair actions including “threats, overly restrictive policies, denial of benefits, change in operations, and other alleged violations.”

The letter demands Chorlian be removed from the 874 Commonwealth store and required to undergo additional training and supervision. It also requests a monthly review of staffing schedules “to ensure that shifts are adequately staffed.”

“Starbucks has great partners, and we value their contributions. We respect our partners’ right to engage in any legally protected activity or protest without retaliation,” a Starbucks spokesperson said in a statement to Fortune, echoing similar statements previously given by the coffee chain. “We are grateful for each partner who continues to work, and we always do our best to listen to the concerns of all our partners.”

Chorlian did not respond to Fortune’s request for comment.

‘What we’re doing is not unjustified’

Organized by 20 employees from the store, on the campus of Boston University, the 24-hour picket line now comprises volunteers and striking store workers who are assigned to two-hour shifts, based on submissions to a Google form and a Signal group chat with over 100 members, according to the Boston Globe. The picketers’ main goal is to “not leave the line empty,” preventing Starbucks from trying to reopen the store.

Leo says the strike has received a lot of support, not just from the local community, but also from other unions such as the steelworkers union, the bus drivers union, and the teachers union.

“It’s really helped to reinforce the idea that what we’re doing is not unjustified,” Leo notes. “The reality of it is everyone should have a union, as we all deserve to get paid, and we all deserve to be able to live our lives without having to worry about all this nonsense that they are putting us through.”

Starbucks lawyers have been communicating with lawyers from Workers United, a labor union representing the striking workers, according to Leo. As of the time of this writing, negotiations are still in the “pre-communicating phase.”

“They should be bargaining with us soon,” Leo says. “If not, we will just have to keep going until they do.”

The coffee chain published an announcement on July 23, saying that it would be “exercising its legal right to continue operating 874 Commonwealth while any workers remain on strike.” The letter states that the store will be open for business as soon as it is properly staffed, and suggests that if any workers who are on strike would “unconditionally return to work,” they would be scheduled to do so as soon as possible.

However, the announcement did not directly respond to the workers’ demands or the allegations made against the store manager.

As of Aug. 3, more than 200 Starbucks stores across the U.S. have voted to unionize, while 45 have rejected a union, according to the Mapping the Starbucks Unionization Effort. And workers’ unionizing efforts have received support from left-leaning (and New England–based) politicians such as Sen. Bernie Sanders (I-Vt.), Sen. Elizabeth Warren (D-Mass.), and Rep. Ayanna Pressley (D-Mass.).

Howard Schultz, who is back for his third stint as chief executive, and who built the firm into a corporate giant, has criticized unions as a “third party” that comes between the company and its workers. He said in a recent interview with the New York Times that unionizing will cause Starbucks to lose business, and the coffee chain will never accept the union.

“The customer experience will be significantly challenged and less-than if a third party is integrated into our business,” Schultz said.

Workers United has responded by filing four charges with labor regulators over the Starbucks chief’s statements to date.

The Boston strike is the longest, but it’s far from the only extended union activity at a Starbucks location. Sam Amato, a 13-year employee of the chain, told Fortune in early August that he was fired as a shift supervisor because he became a union leader at a store in Amherst, N.Y., a suburb of Buffalo. That store became one of the first in the country to unionize, and union staff walked out after his firing. A video of the walkout went viral on TikTok, with 4.6 million likes and 53.3k comments.

On Aug. 24, the National Labor Relations Board filed a complaint saying the coffee chain is withholding benefits and pay raises from unionized stores. Back in June, NLRB filed a petition with the U.S. District Court in Buffalo accusing Starbucks of employing what the agency called an “expansive array of illegal tactics.”

Starbucks CEO Howard Schultz said in a recent interview with the New York Times that unionizing will cause Starbucks to lose business, and the coffee chain will never accept the union.
Xinyan Fu—Fortune

However, the picket line at 874 Commonwealth Ave. is still going strong.

“The way they are treating us as employees and as humans is not acceptable,” Beaudry says, and she plans to continue to strike with her coworkers because she doesn’t want other employees to endure what she says is unfair treatment, even though the experience has left her feeling “extremely frustrated” and “stressed.”

“It’s not that I want the strike to be this long, because I want to get paid again. I like working in Starbucks,” Beaudry says. “It’s honestly harder being out here than it is in there.”

Beaudry says that after participating in this strike, she feels empowered to speak to others about unionization efforts because she’s part of something “so monumental.”

“Ten days ago, we celebrated 30 days of being on strike,” she notes. “We’re celebrating because we are continuing to go forward with the strike and not stop and not back down. It makes me feel like I’m doing the right thing.”