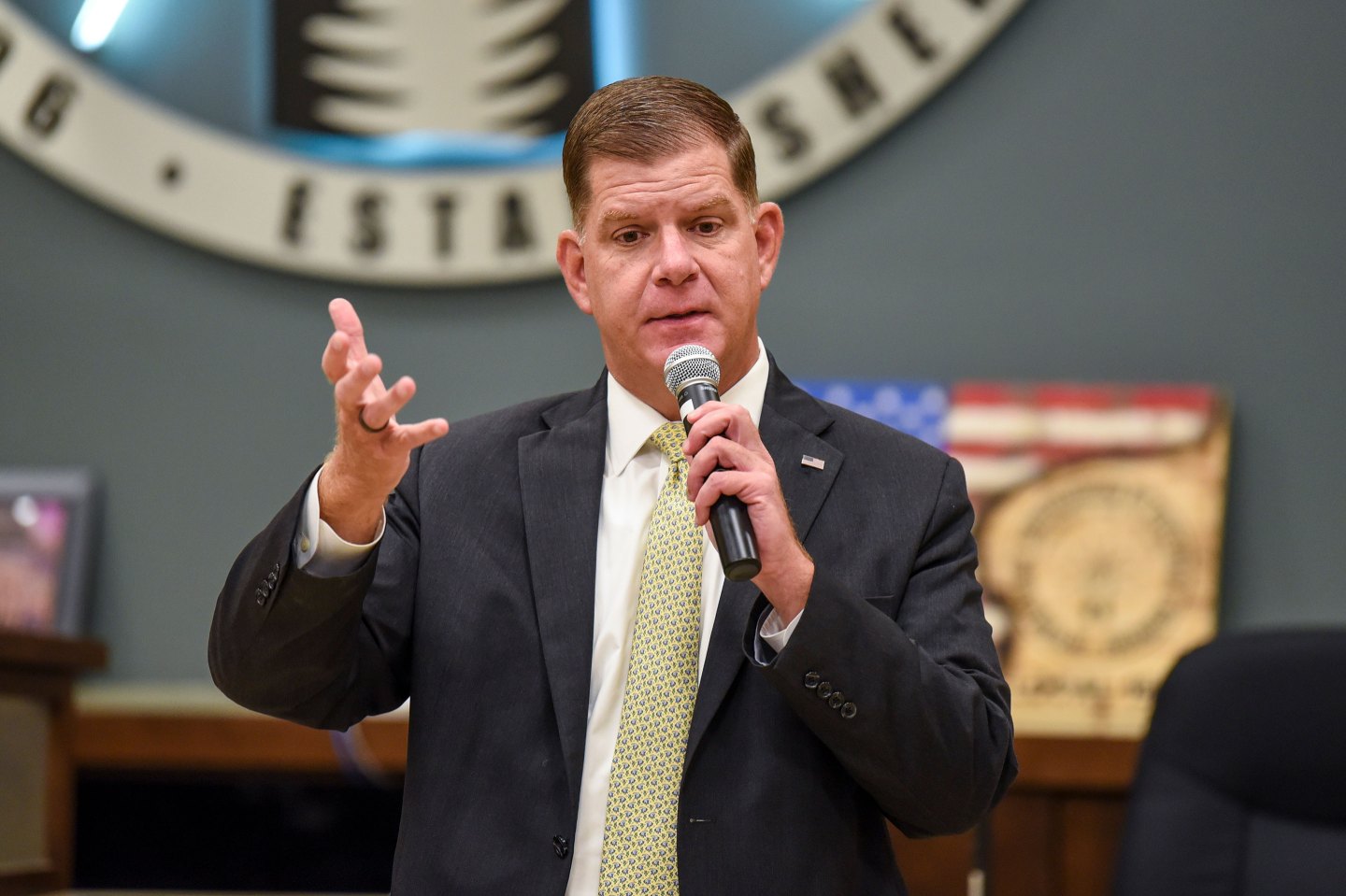 With Labor Day around the corner, Fortune sat down with Labor Secretary Marty Walsh to talk about the current state of the workforce, labor market trends, and what he’s watching for when it comes to the broader U.S. economy.

The following questions and answers have been condensed and edited for clarity.

Experts are predicting that Friday’s jobs report will show the U.S. is adding jobs at a much slower rate than earlier in the pandemic. Some argue that this is just the process of normalizing; others take it as a warning sign. At what point do you see slowing job growth as a warning sign?

Secretary Walsh: At some point, we have to go back to what you described as a normal jobs report. We’re not going to be able to continue to put up 500,000-plus jobs created every month, because we’re going to run out of people.

We’re at a point where, if you’re a city, or town, or the federal government, we really need to continue to make investments in workforce development, job training. When you go into a recession, every sector doesn’t close down. There’s certain sectors that stay open. And we have so many sectors in this country now that we’re seeing, not just back to work at pre-pandemic levels, but beyond that. Construction, tech, cybersecurity, electrical engineering are hiring hundreds and thousands of people right now and looking to continue to hire over the next five years. If you’re a city or state, or if you’re a company for that matter, you want to make sure there’s an educated workforce that can access these jobs when they become available.

That’s something a little bit different than we’ve experienced in the past. Seeing people leaving their job to go to another job—we’re going to see more of that in the future. Companies are going to be in competition for employees in the future.

I’m pretty convinced that I don’t think we’re going to go back. Just like the workplace isn’t going back to that nine-to-five, Monday to Friday in-person completely, our workforce is going to look a little different in the future. We have to be, as a country, prepared for that.

We still have a lot of workers who have been left behind, particularly in communities of color and among women, and are still sitting on the sidelines. And we have a number of workers resisting employers’ return-to-the-office plans. How do you see all this shaking out?

What I hear from employers a lot is, as they think about the future of work in America, there are going to be more jobs and people for that work. Employers all say to me that they need comprehensive immigration reform and visa programs that they can use to sponsor folks if they can’t find workers. And in a lot of those spaces, they can’t.

At some point, Congress is going to have to have a real honest conversation about immigration reform, and what it means to the future of our economy. The biggest single threat to our employers and our economy in this country over the next several years is going to be the lack of workers. Because we don’t have them; they’re not physically here.

Gen Z is entering the workforce in a big way and getting a lot of attention for various labor trends. How much should employers be taking Gen Z’s attitudes about work into consideration?

Every generation that comes in, there’s an adjustment. The Gen Z generation, you’ve got to remember, spent the last year or two years on Zoom in schools, interviews, and work life.

People are demanding better pay, better titles, more wages, better working conditions. If you’re an employer out there and you’re attracting these Gen Zs to your company, you have to be creative. If you’re recruiting folks, sometimes your business model is so strong that the worker has to adjust to the business model. But in a lot of cases, the companies have to adjust to the workers’ expectations.

Quiet quitting seems to be everywhere these days. What’s your take on this trend, and do you think there are any long-term implications for the labor force or the wider economy?

[Editor’s note: Quiet quitting is actually when workers are not outright quitting their job; they’re still performing their duties, but they’re quitting the idea of going above and beyond.]

That will probably level itself out at some point. But there’s a huge opportunity here to capture this moment in time. Employers have to adapt and change to today’s structure.

I’ve had many conversations with employers in America who are adjusting to different types of work styles and work-life balance. The one thing the pandemic showed, and that I think is going to stay for a while, is people looking for a better work-life balance. There’s no question about it.

A lot of the quiet quitting is happening in large financial institutions with people who have second and third homes. And their work-life balance isn’t exactly what they want. They realized with the pandemic, they missed out on their family, their own personal health maybe. For the foreseeable future, we’re gonna see more and more of this until it kind of level sets.

Unionization efforts are popping up all over the country. Is this perhaps an inflection point for unions to regain ground in the U.S.? Some experts have said this is an effect of a better-educated workforce—what’s your take?

I think that’s part of it, the better-educated workforce. You’re seeing workers who are organizing that are either in college or going to college. You see younger people, between the ages of 18 and 25; 70% of that population is looking favorably upon organized labor as an opportunity to put themselves in a strong position.

President Biden announced his student loan forgiveness plan last week. Do you think it will have any long-term impacts on the labor market?

No, I don’t think it’ll have an impact on the labor market. What student loan forgiveness will allow people who are able to access it is the opportunity to create better pathways. A lot of young people go to school for a particular degree and career, and when they graduate, they end up having to go into a different field altogether because they can’t afford to go into the field they went to school for. So I think it’ll create better pathways into those industries. Plus, it might help a young person get a start on buying a home or putting themselves in a better situation. It might give the people a little bit of breathing room to maybe not have to do the three jobs.

They’re still gonna have student loan debt. It’s up to $10,000 per individual and up to $20,000 per Pell Grant. Anyone who went to any college, even a moderate-costing college, is still going to have loans they’ve got to pay off.

The recent Job Openings and Labor Turnover Survey (JOLTS) released Tuesday showed job openings remaining stable at over 11 million, workers still switching jobs, and minimal layoffs. As you’re looking at all of these indicators, where do you see the U.S. economy?

The way I look at this—and let me preface it by saying I’m not an economist—we are trying to compare this moment in time to another moment in time whether it’s the beginning, middle, or end of recession.

The pandemic highlighted the inequities in the workplace. You have a lot of people that in the last year have quit their job, but haven’t stayed out of the workforce. They’re looking for new opportunities for employment. You have companies that are still hiring. Yes, there’s some tech companies and some random companies around the country that are laying off for different reasons. But, in my opinion, the market is going to remain strong for the foreseeable future.

President Biden’s policies have been working. I think some of the investments in the infrastructure bill and the CHIPS Act will have long-term support for the country. The Inflation Reduction Act will have some quicker responses to inflation, but a lot of this stuff is long-term and will benefit us economically in the future.

Let’s hypothetically say we have a downturn in the economy in a couple of years. The infrastructure law will be kicking in in a big way. So it’ll be making up for those potentially lost jobs.