A winemaker set out to revive forgotten grapes. What he discovered could help save vineyards from climate change 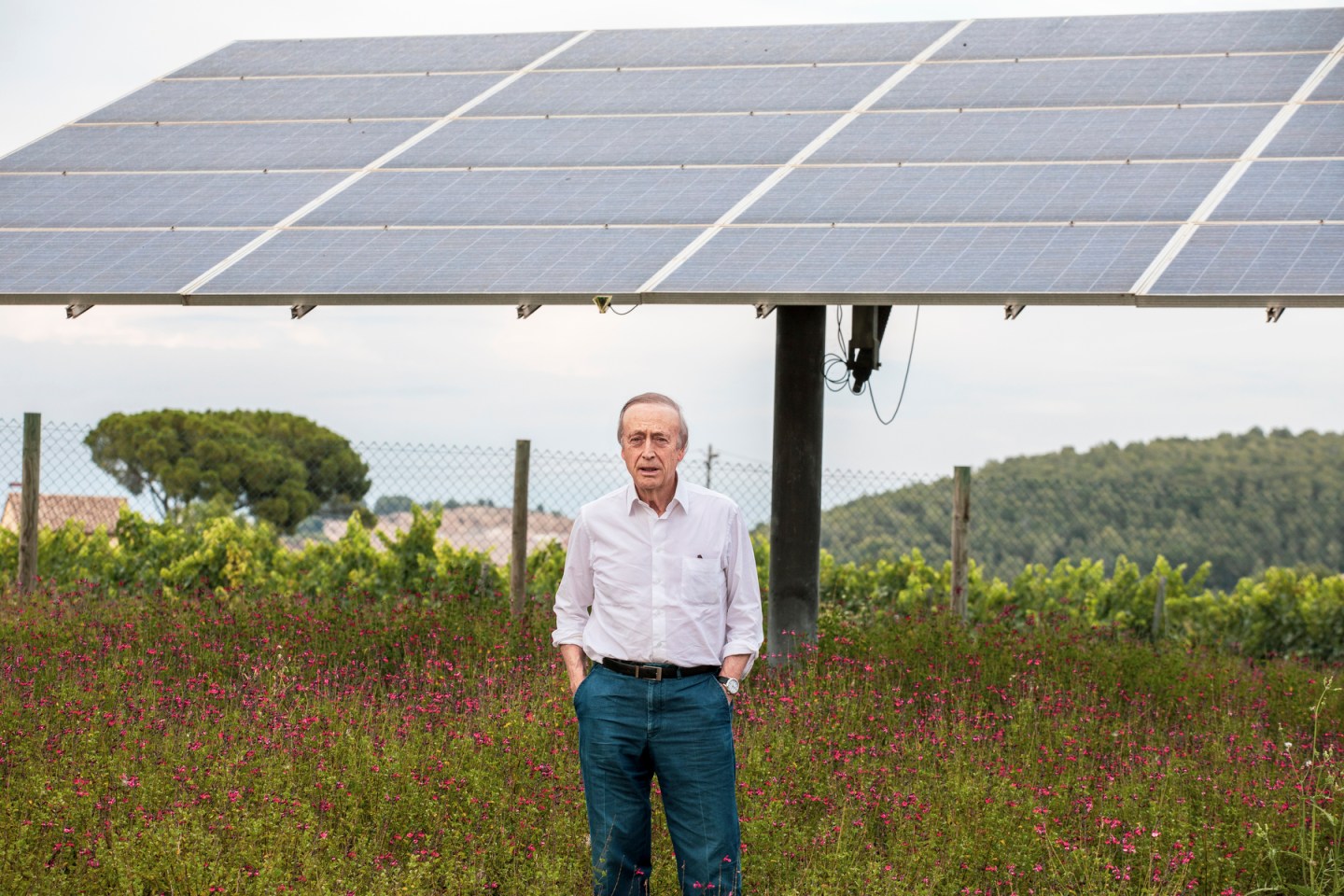 Miguel A. Torres originally launched a project to bring back forgotten grape varieties out of a sense of “cultural heritage responsibility,” he says. The climate change adaptation he unearthed in the process was a “lucky side result.”

Torres, the fourth-generation president of Familia Torres, a 152-year-old winery in Catalonia, in northeastern Spain, started the effort almost 40 years ago after talking with famed viticulture professor Denis Boubals about the great phylloxera aphid epidemic of the late 19th century. The infestation of the tiny insects accidentally imported from North America had destroyed almost every European vineyard, but—Boubals suggested—a few vines had probably survived somehow, somewhere.

Torres, now 80, took up Boubals’s challenge to hunt for orphan vines—what he calls an “exercise in viticultural archaeology.” Over the course of decades, his winery rediscovered 54 ancient grape varieties from Catalonia, including six good enough for Familia Torres to commercialize as wine.

Perhaps far more profound, some of the grapes Torres’s winery unearthed are better suited to extreme heat, offering his own business—and vineyards throughout the world—a vital tool to counter the existential threat of climate change without sacrificing quality.

Save for one blend unveiled in 1999, Familia Torres has just begun releasing wines using the six “new” grapes in the past three years. New York Times wine critic Eric Asimov listed one—Familia Torres Costers del Segre Pirene 2018—among his best wine “moments” of 2019. And at the annual Wines from Spain Awards in May, another—the Familia Torres Forcada 2018—was named best white of show.

If phylloxera were the last great threat to the wine industry, climate change is certainly the next, says Tim Atkin, a prominent wine analyst who holds a Master of Wine certification. “It will require a massive rethink of how the industry does viticulture,” he says.

Rising temperatures have hammered winemakers in recent years, and the assault is expected to get worse. Average growing season temperatures in 22 world wine regions rose 1.4°C between 1901 and 2017 and are projected to rise another 2°C over the next 50 years, according to a study by climatologist Gregory Jones, former director of Linfield University’s Evenstad Center for Wine Education in Oregon.

As grapes ripen, their alcohol-producing sugars rise, and their phenols—which define the color, taste, and so-called mouthfeel of red wine—grow more complex. At the same time, the acidity that gives wine its tartness falls. In a good year, with the right grape in the right climate, the compounds reach their perfect balance at harvest.

Under extreme heat and dry weather, however, the sugars reach their optimal level before the phenols develop, leaving winemakers with a difficult decision: pick early and lose out on complex flavors and aromas, or wait and risk shriveled grapes or heavy, highly alcoholic wine with little acidity.

Recently, winemakers have opted for earlier harvests. In Spain this year, many growers picked grapes two to three weeks early. In areas of France, average harvest dates have moved up by about three weeks since 1950. Some winemakers in southern France near the Spanish border just recorded their earliest harvest ever, starting in July.

“The risk is the fragile ecosystem in marginal areas, where the best grapes often come from,” says Atkin.

Forward-thinking winemakers are experimenting with how they grow grapes—or which grapes they grow—to prepare for a hotter future.

Many growers have tried to delay the ripening of the grapes by shading the grapes more, using targeted irrigation, or putting off pruning.

Others, like Torres, are looking to uncover native vines more resistant to heat. In 1998, Bodegas Roda, a high-end Spanish winery, started classifying the diverse “morphotypes”—vines with subtly different genetic profiles—of Spain’s Tempranillo, a project that has evolved to focus on identifying versions that mature more slowly and better resist climate change. Since then, Roda has partnered with Argentine researchers to study morphotypes of Malbec.

And growers have tried planting new vineyards in cooler areas—at higher altitudes or more polar latitudes. Roda, for one, recently planted a major vineyard in northwestern Rioja at a previous too-cold altitude of 650 meters using 25 of the most promising morphotypes it uncovered in its studies, says managing director Agustín Santolaya. With every 100 meters of altitude, the temperature drops by almost 1°C, Torres says.

“Pinot Noir could shift north to Denmark or England,” Atkin says. “If the last few years of climate change have told us anything it’s how fast things are changing. It’s bonkers.”

Back in the 1980s, Torres started his hunt for ancient vines by placing ads in local and regional Catalonian newspapers that asked readers to contact Familia Torres if they found vines they could not identify. For years, the tips rolled in, alerting Torres to “disappeared” grape varieties that were growing in abandoned vineyards behind natural barriers, like mountains, that had kept out phylloxera for over a century.

“A lot of the people who called us were not winegrowers, but growers of other fruits like apples [who] had completely forgotten about these vines until they saw our ads,” Torres says.

Torres worked with researchers at Tarragona and Montpellier universities and later used microsatellite DNA analysis to identify the vines and make certain that a “lost” variety was native to the region.

Then Familia Torres viticulturists grew the vines in vitro, and later in the winery’s nursery. Once planted in Torres’s central vineyard, which features more than 200 grape varieties from around the world, the vines that exhibited winemaking potential were tested in extreme climate conditions. They were planted at the winery’s Purgatori property near Lleida, Spain, where summer temperatures regularly break 38°C, and at its Sant Miquel de Tremp vineyard in the Pyrenees foothills, which are some 1,000 meters above sea level.

The results of the decades-long experiment surprised Torres and his team—and gave them hope. Not only did six of the varieties possess the characteristics to make good wine, they were also generally slower to ripen and had high acidity levels, making them remarkably well suited for warmer, drier climates.

The resilience of the ancient grapes may be the result of medieval winemakers’ farming tactics. Back then, winemakers mixed 20 to 30 different kinds of vines in any one vineyard and likely selected those that performed best—reaching peak ripeness at the end of the season—for further planting, Torres said. By contrast, many of today’s vineyards—especially in the New World—feature superstar strains of one well-known grape variety (Cabernet Sauvignon, Sauvignon Blanc, and so on) that haven’t been matched to the region over time.

“Torres is looking to the past in a good sense, to the best in traditional viticulture that looked at polyculture instead of monoculture,” says Atkin.

Familia Torres is now growing recovered ancestral grapes on more than 70 hectares of its own land and offering the recovered varieties to other winemakers. Torres’s children have expanded his research to other wine regions in Spain.

“There’s a genetic pool out there that we don’t know enough about that could be a very important tool for transitioning to a warming climate…If there’s a variety that has drought tolerance and creates great wine, it could be one that we can use in genetic work or plant breeding,” says Jones. “Or it may be the variety that takes us for the next 50 years.”

For Torres, the patriarch of a multigenerational wine family, the long and surprising road ends with pride.

“It is the fifth generation who really took the project to another level,” he says. “And in a way [my children] Miguel and Mireia are now planting for the future by returning to the past and reviving varieties used by our ancestors.”