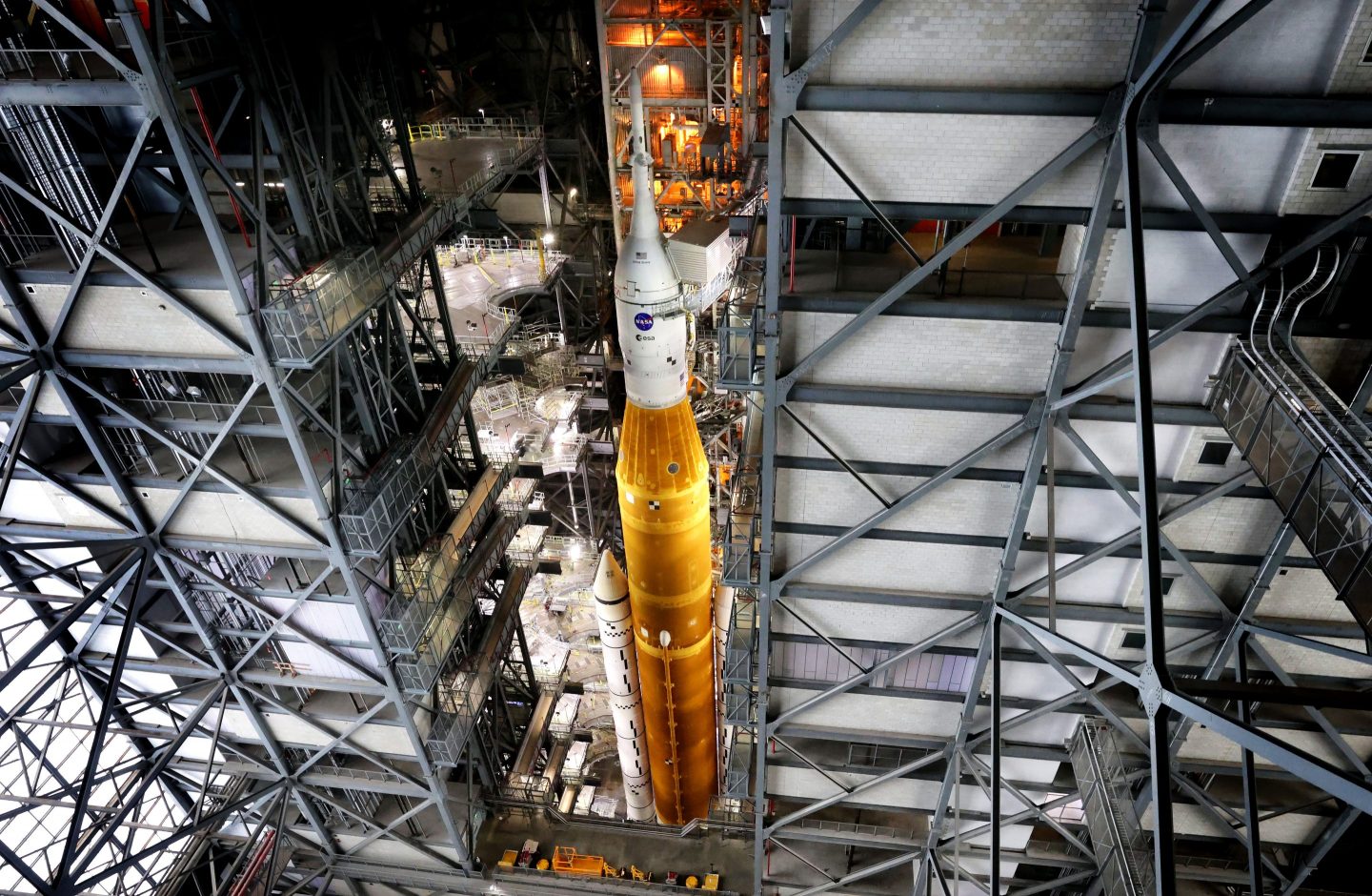 Update: After scrubbing the Sept. 3 launch due to a hydrogen leak, NASA announced it would forego any launch attempts until at least October. The rocket and spacecraft have been rolled off of the launch pad while they work on the issue for safety reasons. The next potential launch window for Artemis is between Oct. 1 and 4. If it’s unable to make that window, Artemis 1 might have to wait until Oct. 24.

Humans haven’t set foot on the Moon since 1972. On Saturday, Sept. 3, NASA hopes to finally begin the process of getting people back there.

The Artemis 1, an unmanned rocket, is set to blast off from Kennedy Space Center on a 42-day mission to the Moon and back. It’s supposed to be a test mission that would put both the booster and the Orion capsule, which will eventually carry astronauts, through its paces—a way for NASA to learn what it does and doesn’t know.

It’s not the first attempt. Originally set to lift off on Monday, Aug. 29, the Artemis 1 launch was scrubbed by the space agency due to fueling issues., specifically a leak discovered during the fueling process. (It turned out that inaccurate sensor readings were to blame for the scrubbed launch.) While NASA had a window of availability on Friday around lunchtime on the East Coast, it opted to delay the launch until Saturday to ensure the issues were resolved.

Hoping to watch the first step in the return to the Moon or want to know more? We’ve got the details.

What time will Artemis 1 take off?

Weather permitting, the Artemis 1 mission is scheduled to lift off sometime during a two-hour launch window that opens on Saturday at 2:17 p.m. ET. The skies might not cooperate, however things are looking better than they did a few days ago. There’s now a 60% chance of favorable conditions at the opening of the window, with conditions improving as it gets later.

If Artemis is once again unable to take off on Saturday, the next window falls on Labor Day, Sept. 5, with a 90-minute opportunity opening at 5:12 p.m. ET.

Can I watch the Artemis 1 launch on television?

NASA TV will carry the launch live, though it’s less clear if the celebrity appearances from Chris Evans and Jack Black that were scheduled to occur Monday will still take place. NASA’s coverage will begin at 12:15 p.m. ET on both TV and its Web streams. Major cable news networks are also likely to cover the launch, and some broadcast networks may briefly break into programming.

How do I watch the Artemis 1 launch online?

There are several online options for space fans to tune in. You can watch on any of the following feeds:

The Artemis liftoff will be the biggest in a long, long time, and the 322-foot SLS, or space launch system, has been billed as the most powerful rocket ever. The two solid rocket boosters and core stage are filled with 733,000 gallons of propellant, which will push the Orion orbiter out of the atmosphere and into orbit. An upper stage will send it on its way to the Moon.

Orion is unmanned but will carry three dummies on board to test what humans will have to endure in the flight in terms of G-force and radiation.

What happens when the Orion orbiter reaches the Moon?

After it completes a full orbit around Earth, Orion will head on a trajectory that will put it in lunar orbit. After a trip of one to two weeks, it will, at times, fly 60 miles over the Moon’s surface, transmitting what are expected to be stunning photos. It will also fly 40,000 miles past the Moon, gathering data.

The entire mission is expected to last between 26 and 42 days.

When will NASA send humans back to the Moon?

If all goes according to plan, the Artemis 2 mission will send astronauts into lunar orbit in 2024. In either 2025 or 2026, the Artemis 3 mission will land on the lunar South Pole, with the assistance of SpaceX’s Starship, returning humans to the surface.

The Moon, of course, isn’t the final destination. NASA hopes, long-term, to learn the best ways to live, work, and survive in hostile outer space conditions. That will make crewed missions to Mars feasible by the mid-2030s.