Celsius Network owes its customers $4.7B after declaring bankruptcy. Individuals are pleading their case to get their savings back 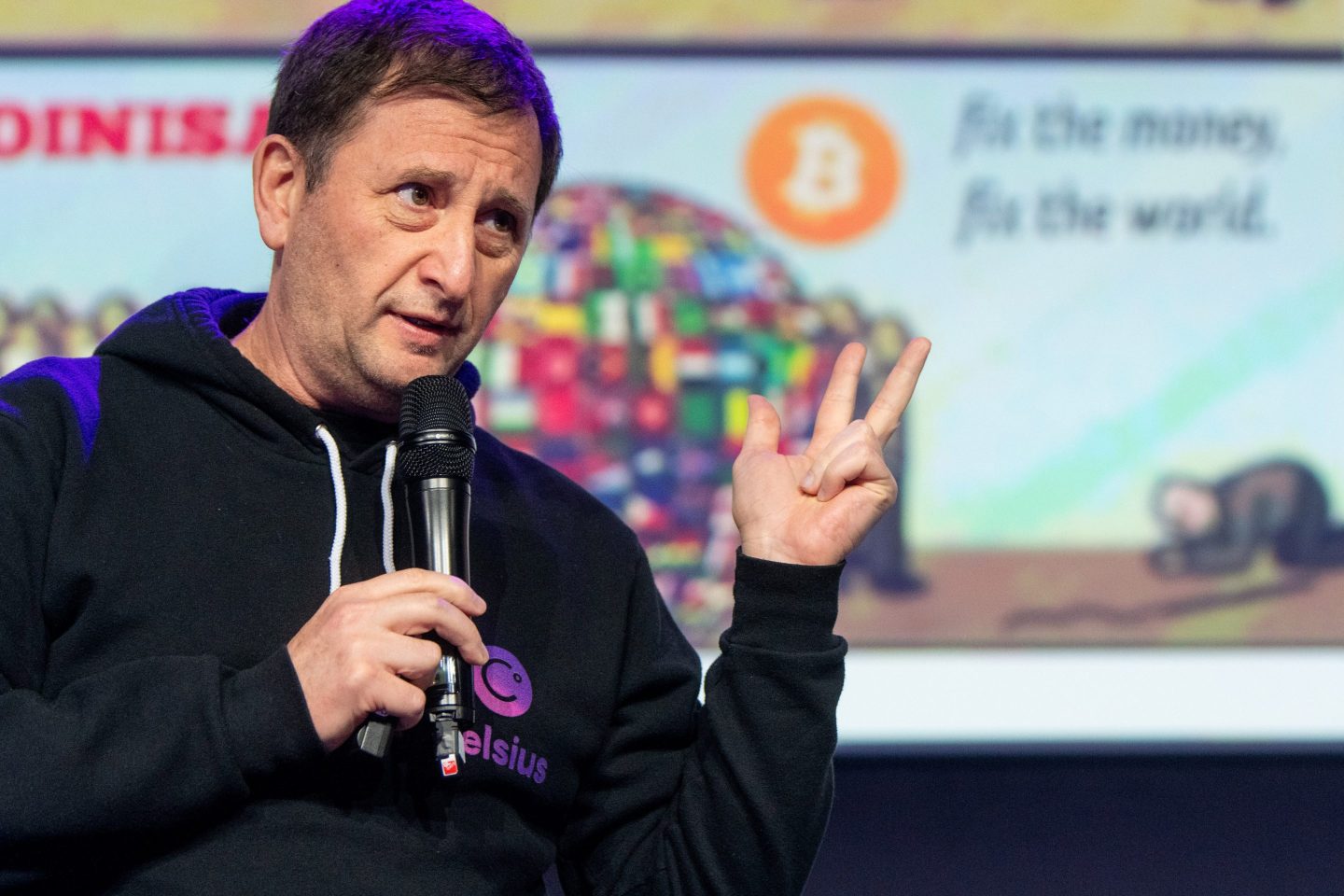 Alex Mashinsky, founder and CEO of Celsius Network, had scaled the crypto lending fintech to more than $12 billion in assets earlier this year before the company declared bankruptcy in mid-July.
Benjamin Girette—Getty Images

Before joining Fortune, I used to cover the wealth management industry. My most difficult interviews were phone calls with individuals who had just lost decades of their life’s savings—seemingly in an instant—after putting their trust in a financial advisor who assured them they weren’t taking major risks with their money. I’ve listened to people cry as they recalled that moment they realized everything they had worked for had basically evaporated into thin air, as they knew they’d need to move back in with their children, or go back to work in their retirement.

A lesson I learned early on was that those with the least to begin with tend to have the most trouble getting any of it back.

So perhaps this is why the demise of Three Arrows Capital, the depletion of TerraUSD, and the ultimate fallout of the crypto lending fintechs this year has felt so devastating. There have been many casualties: A 500-ton, unused yacht named Much Wow, billions in valuations at hot crypto startups, and layoffs across some of the crypto world’s largest companies.

But here’s what is truly gut wrenching: There were individuals who say they were under the impression that their money was safe, and they may have just lost everything.

“It was our chance of having a baby.”

That’s a line from a letter, pointed out in a recent story by the New York Times—one of hundreds sent to the Bankruptcy Court in the ongoing case of Celsius Network, the crypto lending fintech that spiraled into bankruptcy this summer, and whose customers are collectively owed some $4.7 billion. The Australian couple who penned that line, Katie and Christopher Davis, say they had deposited around $150,000 into Celsius in hopes to use it to start a family. “That was our life savings,” they wrote.

The Davis’s are two of thousands of investors who had deposited money into what was allegedly advertised as a crypto-version of a high-yield savings account at Celsius Network that are currently trying to finagle back some of the cash they lost. Celsius Network, under the leadership of its charismatic CEO Alex Mashinsky, had said it had accumulated around $12 billion in AUM by mid-May, and it had achieved a more-than $4 billion valuation in November after getting investment from WestCap and Canada’s second largest pension fund, CDPQ, among others. Its Bitcoin mining subsidiary had been planning to go public. (Spokespersons representing Celsius Network and WestCap didn’t return requests for comment before publication, and a CDPQ spokesman declined to comment.)

But in June, the crypto lender had frozen assets on its platform as the broader digital asset markets tumbled. It had begun to pay hundreds of millions of its debts, but ultimately owed $5.5 billion in liabilities, with only $4.3 billion in assets, according to the bankruptcy filings.

More than $4.7 billion of the company’s debts are to its customers, and those depositors are pleading with the judge to get what they can back.

Here are some excerpts of letters filed in the New York Southern Bankruptcy Court:

“I am a newly retired senior citizen living on primary fixed funds. I have only had assets on Celsius since 2022 with nothing to show for it, not one penny.”

“I deposited money on the Celsius platform as a retail investor who sought an opportunity for a safe, conservative investment. I am an ‘average Joe’ of average means, I work full time as a registered nurse and I am raising a newborn daughter.”

“As I sit here behind my computer, I am almost at a loss for words due to the gross misrepresentation by Celsius Network LLC. In the past 6 weeks, the unexpected freeze of my accounts and subsequent filing of bankruptcy has disrupted both my and my family’s life. The stress of this event on both myself, and my family is beyond words. I don’t know how to express the guilt, the frustration, the shame, the self-doubt, and absolute anger that I am feeling regarding the burden I have caused and placed on my family… How do I explain to my daughters that the financial nest egg that would have been their start to a better future is now ‘frozen’, and we may never see those assets again. How do I possibly rebuild that nest egg now? Most importantly, how do I begin the healing process with my wife and my daughters over this?’

Celsius is one of several crypto fintechs that offered high-interest accounts for investors to park their cash and earn more than they could at a bank—and it’s not the only one to have imploded this summer. The key argument at hand is whether those fintechs had misled their customers into believing their funds were safer than they actually were, as I have written about previously (see here). It’s an issue the Federal Deposit Insurance Corporation raised with another crypto lending platform, Voyager Digital, last month. The FDIC and Federal Reserve had publicly demanded that Voyager “cease and desist from making false and misleading statements concerning the company’s FDIC deposit insurance status.”

“It appears that these representations likely misled and were relied upon by customers who placed their funds with Voyager and do not have immediate access to their funds,” the agencies said. Voyager, which formerly traded on the Toronto Stock Exchange, filed for bankruptcy in early July and delisted its shares from the exchange. (A Voyager spokesman declined to comment apart from pointing back to the company’s press releases and a website page indicating it had worked with the FDIC to “to update and clarify the language on its website.”)

For Celsius customers, some of the depositors take responsibility for not doing enough due diligence themselves. From one letter:

“I will have to live with my mistake to entrust Celsius with my very hard-earned money. I’ve heard of ‘if its sounds too good to be true, it probably is’, and I have to do a better job in applying this to my decisions in life going forward. I just hope that the tens of thousands of people that are caught up in this mess can weather this storm and remain of sane mind and body, and that justice is swiftly served to us, as we thought our coins were safe as we were told they would be, and that people at Celsius are held liable for their poor leadership.”

It will likely take several more months to see how the Celsius bankruptcy plays out, and how much money depositors will see again. But however it ends up, it’s a dark reminder of what can go wrong, and what cost the collapse of a once high-flying startup can have on everyday people.

Some VC investors talk to me about startups as if they were an experiment, as if failure was merely a part of the process, as if founders were blameless champions, fighting it out in the ring.

It’s impossible to measure the cost of success and failure. But there is a cost, and every once and a while it is laid out clearly in dozens of carefully-penned letters.

Editor’s Note: This post has been updated with a note that a CDPQ spokesman declined to comment.

- Flossy, a Los Angeles-based dental care company, raised $14.7 million in Series A funding. TTV Capital led the round and was joined by investors including Slow Ventures, 8VC, Clocktower Technology Ventures, SV Angel, and other angels.

- Mobot, a New York-based mobile experience robotics company, raised $12.5 million in Series A funding. Cota Capital, Heavybit, Uncorrelated Ventures, and others invested in the round.

- Sofy, a Seattle-based mobile app testing platform for software developers, raised $7.75 million in seed funding. Voyager Capital led the round and was joined by investors including PSL Ventures, GTMFund, Revolution, and others.

- Demoleap, a Tel Aviv-based live demo assistant and sales discovery platform, raised $4.4 million in seed funding. Bonfire Ventures and Differential Ventures co-led the round and were joined by investors including 25madison, Ground up, and others angels.

- GitPOAP, a Boston-based contributor recognition platform, raised $4.28 Million in seed funding. Inflection.xyz and Libertus Capital co-led the round and were joined by investors including Avalanche VC, Protocol Labs, POAP, and other angels.

- Roleshare, a London-based job sharing platform, raised $1.2 million in seed funding. Plug and Play VC led the round and was joined by investors including Forward VC, Rethink Capital Partners, Techstars VC, and other angels.