Chinese corporations now dominate the Fortune Global 500 list of biggest companies by revenue— but they are far less profitable than their U.S. rivals 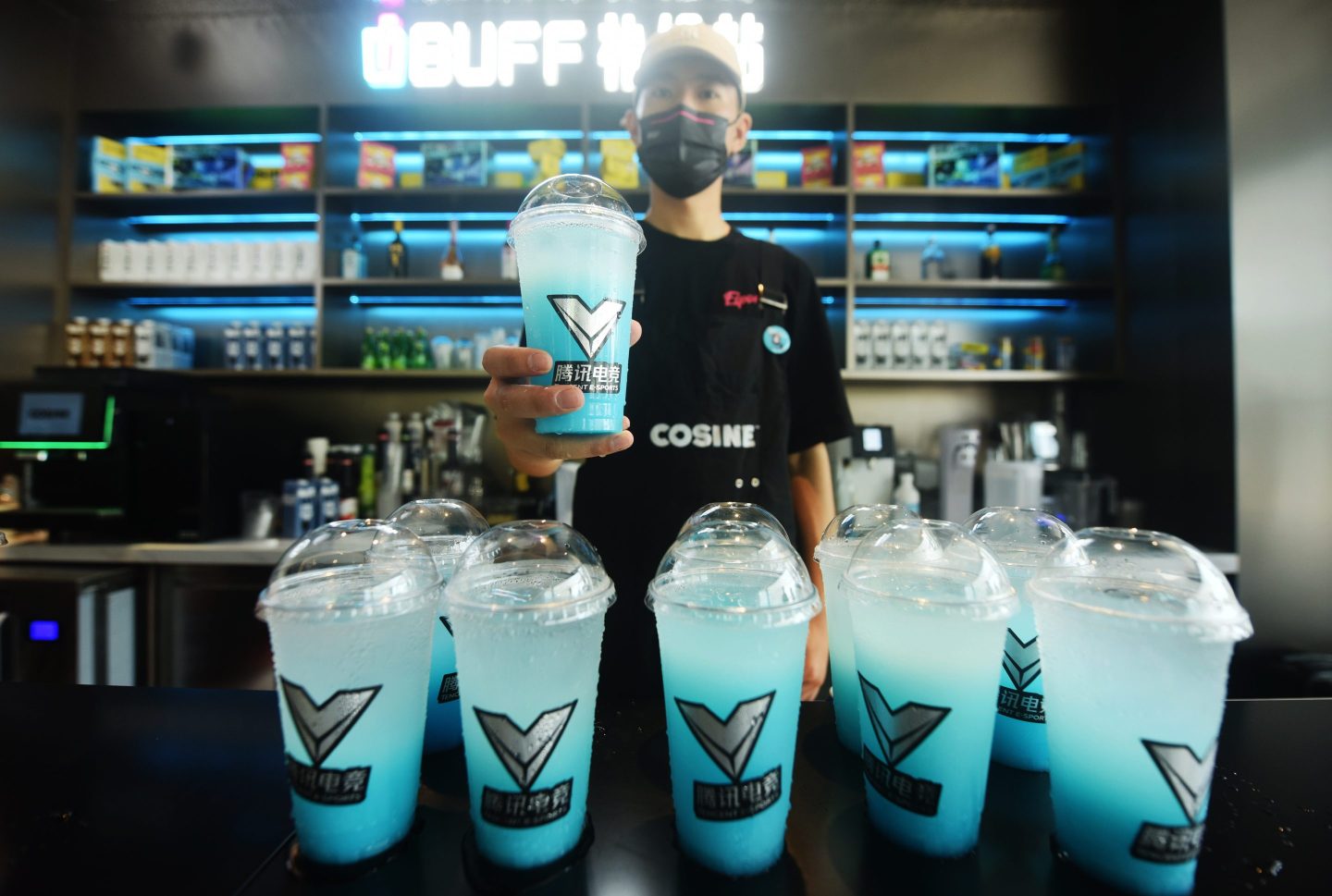 A speciality drink at Tencent's first e-sports themed hotel, The Goose Hotel, in Hangzhou. Tencent ranked 11th and is the only Chinese tech company to crack the Top 20 in profitability.
CFOTO/Future Publishing/Getty Images

“For the first time, Chinese companies on the Fortune Global 500 list have made more money than their U.S. counterparts,” exulted the state-owned Global Times.

Strictly speaking, that’s not true. The Global 500 ranks firms according to sales, not profit. Despite their extraordinary continued revenue growth, the Chinese companies on this year’s list significantly underperformed their U.S. and European rivals if measured by how much money was left over after expenses. There are several possible reasons why.

China is home to 136 companies on this year’s Global 500, eclipsing the U.S., which was home to 124 firms. Add in the nine companies from Taiwan, and the total number of firms from Greater China rises to 145. That’s two more than last year, and up from just three companies in 1995, the first year Chinese firms made the Global 500.

In 2021, the year on which the 2022 ranking is based, Fortune Global 500 companies from Greater China posted a record $11.5 trillion in revenue, accounting for 31% of the $37.8 trillion total revenue for all companies on the list—and topping, for the first time, the $11.2 trillion revenue reported by U.S. firms.

The 100 “most profitable” companies on this year’s list included 18 firms from Greater China, a new record but less than half the 41 “most profitable” firms that hailed from the U.S. And China’s giants seem even less imposing if profitability is measured as a percentage of sales rather than absolute earnings.

Chinese companies on the Global 500 list reported an average profit of $4.1 billion versus an average of $10.1 billion for U.S. firms and $5.8 billion for European firms. The average profitability of Chinese firms has exceeded that of U.S. firms in only three years since 1995: on the 2003 list, in the aftermath of the U.S. dot.com crash, and on the 2009 and 2010 lists, which reflected losses from the Global Financial Crisis.

If measured by average profit per company, the profitability gap between U.S. and Chinese firms on this year’s list is the widest since 1999 when the Global 500 included only eight companies from Greater China. Chinese companies on the list score even lower by “productivity,” which divides profits by the number of people they employ. Chinese companies earned $30,800 per employee last year, only a fifth of the $154,400 per employee earned by U.S. firms.

The reasons for this year’s wider profit gap between the China and the U.S. aren’t obvious. U.S. firms were buoyed by the strength of their home economy, which grew by 5.7% in 2021, its most robust performance since 1984. But China’s economy, too, was in good health last year, expanding by 8.1%.

One possible explanation for the higher profitability of U.S. firms is that the U.S. has more companies than China in high-margin sectors like technology, finance, and retail while China has more companies than the U.S. in low-margin sectors like energy and materials. The ten most profitable companies on this year’s Fortune Global 500 include four U.S. tech giants—Apple, Alphabet, Microsoft, and Meta Platforms—which together earned about $200 billion. The only Chinese tech company to crack the Top 20 in profitability was Tencent Holdings, which ranked 11th with profits of $34.8 billion.

Beijing’s ongoing regulatory crackdown against the nation’s leading internet companies—in which the state last year hammered Fortune 500 stalwarts Alibaba Group Holding, JD.com, and Tencent with multi-billion dollar fines—also may have weighed down Chinese profits. Alibaba reported a 56% decline in profits in 2021 over the previous year, even as its revenues grew 26%, lifting the company eight places higher to No. 55 in the Global 500 rankings. JD.com swung to a $500 million loss for the year but still rose 13 places to No. 46 in the revenue ranking.

China’s State-owned Assets Supervision and Administration Commission (SASAC), the government body that oversees 96 of the country’s biggest state-owned enterprises (SOEs), acknowledged the lower profitability of China’s firms this month in an English-language post on its website. “The gap between Chinese companies’ average profit level and that of Fortune 500 companies…has widened this year,” the post said. “The average profit of the 145 Chinese companies on the list is $4.1 billion, lower than the global average of $6.2 billion and 2.5 times lower than that of U.S. firms.”

The post quotes Wang Peng, a researcher for China’s state-run Academy of Social Sciences who speculates that the problem is Chinese companies’ failure to make better use of enterprise software and other productivity-enhancing technologies. “If traditional manufacturing companies can make good use of the industrial internet and other technology-driven factors to develop their business profits are very likely to exceed that of foreign peers in coming years,” Wang argued.

Dragged down by state-owned enterprises

Perhaps. But a more plausible explanation for the lower profitability of China’s largest companies may be that so many of them are state owned enterprises (SOEs). By Fortune‘s reckoning, the Chinese government owns a majority stake in at least 87—or about two-thirds—of the companies from Greater China on this year’s list.

But no other country comes close to China in the scale and scope of state ownership. The Chinese government owns a majority stake in the largest firms in nearly every major sector of the economy: oil and energy, metals and minerals, airlines, shipbuilding, banking and insurance, telecommunications, automobile manufacturing, pharmaceuticals, and tobacco. SOEs account for as much as 39% of China’s GDP, employ as much as 16% of China’s labor force, and control an estimated 60% of the nation’s productive assets. Economist Arthur Kroeber argues that China’s SOEs are an “integral part of the political power structure” whose importance is “much greater than implied by economic statistics alone.”

The dominance of state-owned enterprises in China’s economy is a legacy of the country’s Communist past. Under Mao Zedong, the Communist Party wiped out large family businesses in the 1950s. Until well after Mao’s death in 1976, the state controlled nearly all non-farm economic activity. Mao’s successor, Deng Xiaoping, set China on a path towards private ownership and market competition—but never wavered from a Leninist conviction that the state must retain ownership of large-scale enterprises in key sectors to assure control of the economy’s “commanding heights.”

In 1998, then-premier Zhu Rongji launched a sweeping campaign to prepare China for entry into the World Trade Organization that, over the next four years, forced the sale or liquidation of tens of thousands of inefficient small and medium-sized state firms and eliminated 40 million jobs. To pressure large SOEs to function more like businesses than bureaucracies, Zhu ordered the largest public companies to create subsidiaries that could be listed on overseas stock exchanges. But full privatization was never part of the plan.

In 2003, the government of Hu Jintao put nearly 200 of China’s largest state-owned firms under the control of SASAC, a newly created agency reporting directly to the State Council. SASAC was given broad authority to appoint senior executives at SOEs and tasked with consolidating its portfolio into about 100 larger firms whose increased sized would, in theory, make them more globally competitive “national champions.”

That’s not exactly how things turned out. When the Global Financial Crisis struck in 2008, China’s state planners responded with a mammoth stimulus program that pumped billions of dollars in subsidies and low-interest loans into the largest state-owned companies—leaving smaller private firms to struggle. In China, business analysts popularized the four-character idiom 国进民退 (pronounced “guojin mintui“), meaning “the state advances, the private sector retreats.”

In his 2019 book, The State Strikes Back, Petersen Institute of International Economics (PIIE) senior fellow Nicholas Lardy argues that since Xi Jinping became president in 2012, the “picture of private, market-driven growth has given way to a resurgence of the role of the state in resource allocation and a shrinking role for the market and private firms.” SOE boards and managers, apparatchiks appointed by SASAC and the Communist Party, lacked any incentive to eliminate waste or focus on innovation, according to Lardy. Executives at China’s largest state-owned enterprises behaved as “asset maximizers” rather than “profit maximizers,” borrowing huge sums from state-controlled banks and local governments and misallocating capital so badly that, by Lardy’s estimate, they dragged China’s annual GDP growth rate down as much as two percentage points lower than would have been possible if SOEs were as profitable as private companies.

Xi seemed to signal an interest in returning to market-oriented reforms—at least at first. In a policy blueprint issued at the end of his first year as president, the Chinese leader declared that in restructuring China’s economy “market forces” must “play a decisive role in the allocation of resources.” But two years later, when a speculative bubble on exchanges in Shanghai and Shenzhen collapsed, Xi ordered a gaggle of state-owned financial institutions to prop up the market by buying shares.

Wendy Leutert, a China economy specialist at Indiana University Bloomington, argues that “the use of SOEs as a macro-economic tool to arrest Chinese stock market turmoil in summer 2015 was a turning point that deepened Xi and other political elites’ commitment to state ownership and control.” Xi’s first major SOE reform policy document issued later that year, she notes, “did not once mention the ‘decisive role for markets.'”

Indeed, Xi has since stressed the importance of SOEs to achieving the party’s industrial policy and geo-strategic objectives. In an April 2020 speech, Xi lauded state firms as “the economic and political foundation of China’s socialist system and a key pillar for the Party’s rule.” SOEs, he added, “must be built stronger, better, and larger.”

Tianlei Huang and Nicolas Veron, researchers at PIIE, argue China’s private companies are advancing relative to state-owned firms despite global perceptions that Xi intends the opposite. In a March report the two researchers calculated that the 2021 Fortune Global 500 ranking (based on revenue from 2020) included at least 32 private-sector Chinese firms that accounted for 19% of revenue generated by all 130 listed Chinese companies. In the 2005 Fortune Global 500 ranking, they note, all 15 companies were SOEs. Huang and Veron found more dramatic evidence for the private sector’s rise when looking at market value. In 2020, of the 100 largest listed Chinese companies by market capitalization (including but not limited to companies on the Fortune Global 500), 49 were private companies and they accounted for 54% of market value for the entire group. Private companies’ share of market value slipped back to 48% last year, but Huang and Veron expect that, because of their higher profitability, private firms will resume their steady displacement of state firms in years to come.

“It matters that Chinese policies in favor of SOEs have not prevented or stopped the private sector’s advance,” the researchers conclude. “At least until the summer of 2021.”