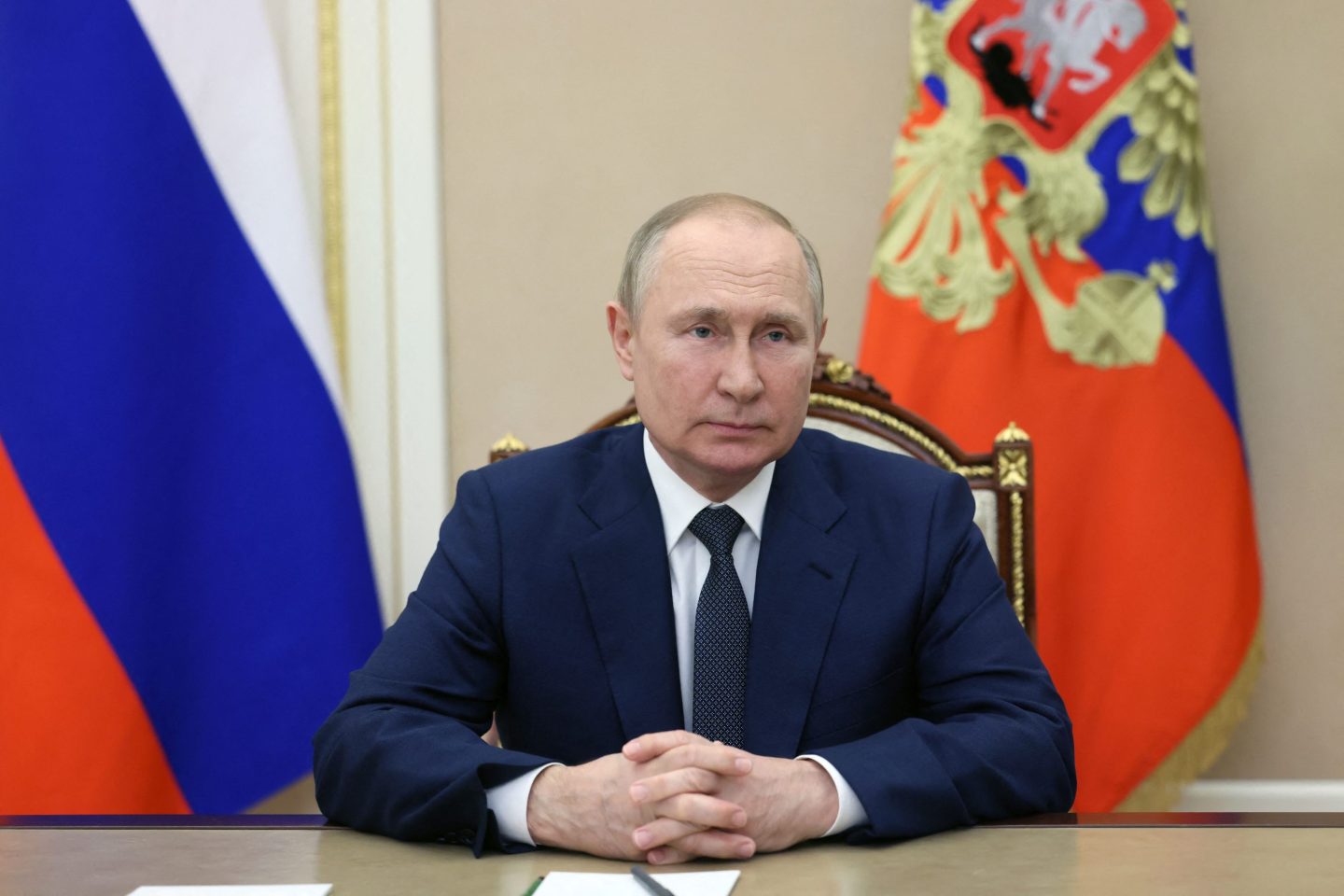 Russian President Vladimir Putin attends the IX Forum of the Regions of Russia and Belarus via a video link in Moscow, on July 1, 2022.
Mikhail Metzel—Sputnik/AFP via GETTY IMAGES

In the six months since Russia invaded Ukraine, around 300 global companies have exited the Russian market, and another 700 have halted new investments and projects, or curbed operations in the country.

Western firms from the U.S. and Europe dominate the long list, which includes banks Citi and Goldman Sachs, apparel brands like Burberry and Adidas, and technology giants like IBM, Intel, Snap and Twitter, according to research from the Yale School of Management.

The large-scale corporate exodus, alongside tough western sanctions, has devastated the Russian economy—reversing decades of foreign investment and cooperation—despite the Kremlin’s continued petrodollar inflow and its insistence that Russia is faring just fine.

But not all global companies have retreated from the country. Around 47 of the world’s 200 biggest companies are still doing business in or with Russia. The process of leaving, after all, can come with major costs. Now, after concerning new moves from the Kremlin, experts say the companies that stayed are now at heightened risk of nationalization as Russia wrestles with how to best deal with the mass corporate exodus, and seeks greater control of their economy.

Political and reputational pressure pushed companies to exit Russia in a hurry after the Ukraine invasion.

But making a clean break with the country has proved to be costly and complex, and many companies that previously announced their intention to leave have continued to do business there as they evaluate how to get out without losing too much money.

French bank Société Générale became a cautionary tale when it  took a $3.2 billion hit selling its stakes in Russian lender Rosbank and affiliated subsidiaries to Russian nickel billionaire Vladimir Potanin (who has since been sanctioned). It sold its Russian assets in a hurry—but to a government-linked businessman, as foreign buyers are few given the risks involved. As one senior banking executive told the Financial Times: “We’re all trying to find a clever way to exit the country. But what SocGen did isn’t the best way to do it. There is an ethical discussion… to consider when selling, or basically donating, to an oligarch.”

But other companies, including many from Japan and China, are still all in on the Russian market. Resource-poor Japan, which has condemned Putin’s war on Ukraine, has continued their oil and gas partnerships with the country. “Our policy is not to withdraw,” Japanese Prime Minister Fumio Kishida said earlier this year.

Chinese state-owned railway and telecom companies, alongside private tech and heavy industry firms, are also still operating as usual in the country—though they remain wary of triggering secondary sanctions from the west. U.S. companies that have stayed include Match Group, the owner of Tinder, video game developer, Riot Games luxury brand Tom Ford, among others, according to Yale’s research.

But the Kremlin’s recent moves might change those calculations, and indicate that the Russian government is willing to take drastic measures against businesses to tighten control of the economy.

If it was once a difficult decision for companies to stay in Russia or leave, it could get a lot easier if Putin decides for them.

On July 1, he signed a decree to allow the government to seize the Sakhalin-2 oil and natural gas project. The Kremlin order gave control of Sakhalin-2 to a new, state-created firm that could strip foreign investors of their rights if it wants to, one of the most forceful moves by the government in response to the corporate exodus. U.K. energy giant Shell and Japanese trading firms Mitsui and Mitsubishi hold double-digit stakes in the Russian energy project.

This month, the two Japanese investors took a $1 billion-plus hit on its Sakhalin-2 assets after writing down the valuation after Putin’s decree. Mitsui and Mitsubishi have stated their desire to remain on the project, but are uncertain where their future stands.

The decree demonstrates that Russia is not just willing to expropriate foreign assets, but is also positioning itself to engage in “expropriation blackmail,” Mark Dixon, founder of the Moral Rating Agency, a research organization focused on foreign firms in Russia, wrote in a July report.

The Sakhalin-2 case shows that foreign investors have already been expropriated, and that Russian authorities are giving them the chance to either agree to the new terms of the new entity that now controls the energy project—or lose everything, Dixon told Fortune this week.

“We anticipate a tsunami of expropriations or blackmailed concessions over the next couple of months,” Dixon wrote earlier this year.

Other experts agree. The Russian government will nationalize—which amounts to expropriation or confiscation by the state—“one foreign company after the other” because of the lack of options available, Anders Åslund, an economist, former senior fellow at the Atlantic Council, and author of Russia’s Crony Capitalism, told Fortune. Russian assets can’t be sold easily because of the dearth of foreign buyers, plus, for those companies that have exited, the companies can’t leave them without owners, he says.

Russia has denied that it will expropriate or nationalize the assets of foreign firms.

“We are not interested in the nationalization of enterprises or their removal,” the country’s trade and industry minister Denis Manturov recently said. Additionally, a draft law that would allow the government to formally nationalize the assets of international firms that have exited Russia has now been paused. The bill didn’t make it through Russian parliament before the summer recess. But western companies remain under significant pressure to make a clean break with Russia or be subject to the Kremlin’s whims, experts say.

The high risk of expropriation remains, even though nationalization might be delayed, simply because the Kremlin has little alternative, Åslund says. Many foreign investors have now left, and “the only natural option for the Russian government is either to seize [the companies] or allow them to be seized by Russian businessmen close to the Kremlin for little or nothing—like [lenders] Rosbank and Tinkoff Bank,” he says.

The pausing of the draft law on nationalization doesn’t “detract from the long-term direction of the Russian economy—which is towards greater state control and increased Kremlin interventions to mask over structural challenges arising from Russia being cut off from international markets as a pariah country,” Steven Tian, director of research at the Yale chief Executive Leadership Institute, the team responsible for researching the corporate exodus from Russia.

He attributes the pause on legislation to infighting between government officials. Some, such as Igor Sechin, an oligarch who runs Russia’s oil giant Rosneft, are staunchly advocating for nationalistic Russian policies, while others are geared toward free market measures. “But clearly, the latter faction isn’t winning right now—even if they come out on top on a couple of occasional skirmishes,” Tian says.

Approximately 47 of the world’s 200 biggest global firms operating in Russia right now are at high risk of their Russian holdings becoming expropriated or nationalized, because of the amount of their investments in the country or current stakes in Russian business, according to the Moral Rating Agency report.

European, Japanese and Chinese investors in Russian energy projects make up a large chunk of the list, which highlights BP’s 19.75% stake in Russian state oil company Rosneft, worth $11.2 billion, and TotalEnergies’ $13.7 billion Russian energy investments. Western consumer goods firms also made the list, including food and beverage company Nestlé, which derives 2% of its revenue from Russia, and home goods maker Unilever, where Russia accounts for nearly 2% of its total sales.

Jeffrey Sonnenfeld is a professor of management and senior associate dean for leadership studies, who is leading Yale’s research on companies that have left Russia. He told Fortune that Putin’s recent nationalization highlights the Kremlin’s desparation now that Russia has become an “uninvestable nation.” In a recent paper, Sonnenfeld’s teams highlights the financial incentives companies have for leaving.