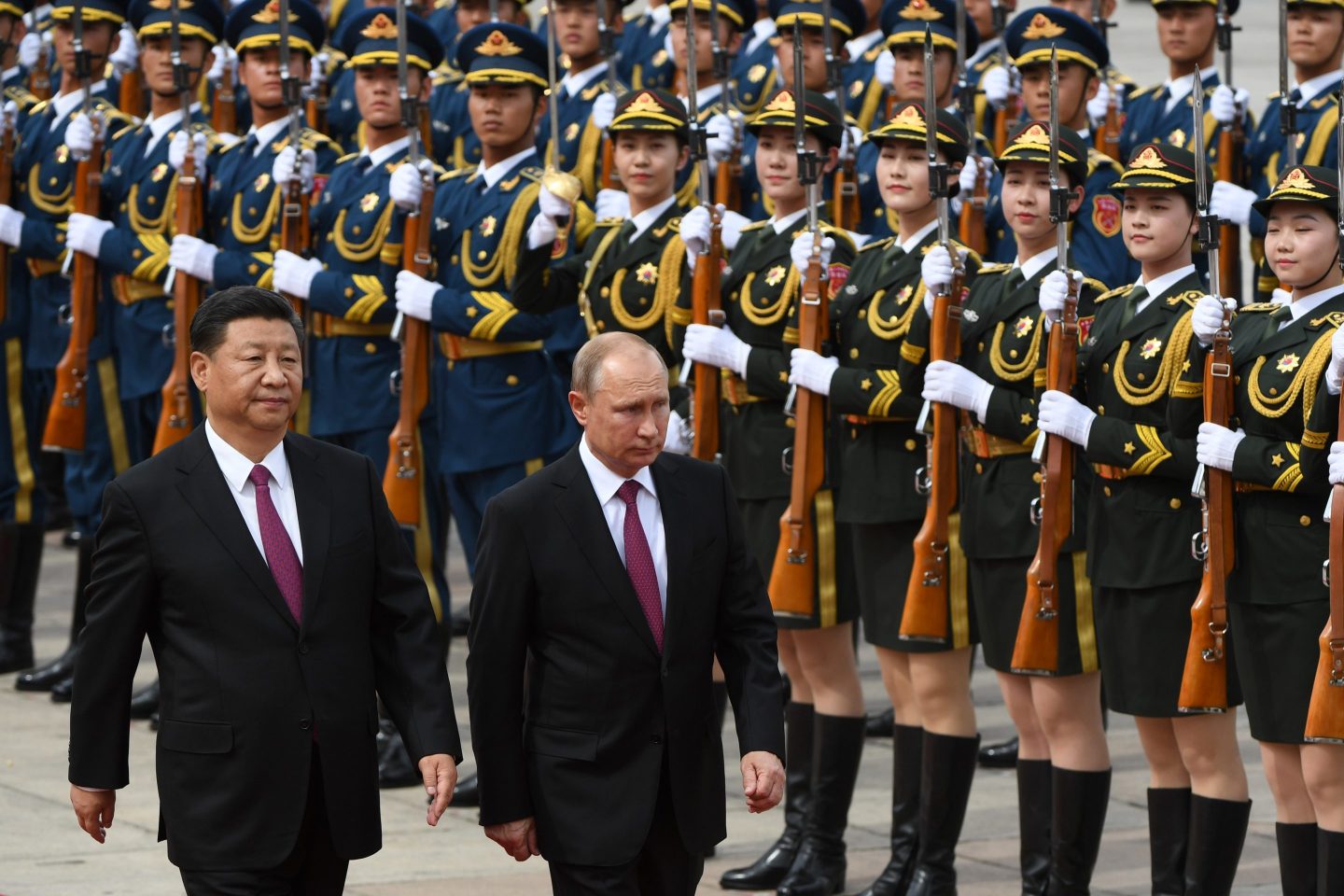 Russian President Vladimir Putin with Chinese President Xi Jinping during a welcoming ceremony outside the Great Hall of the People in Beijing on June 8, 2018.
Greg Baker—POOL/AFP/Getty Images

In 2019, Xi said President Vladimir Putin was his best friend. And in February of this year, Xi and Putin pledged that China and Russia’s partnership had “no limits.”

Now, four months into Russia’s invasion of Ukraine, China seems closer to Russia than ever. Chinese companies stayed in the Russian market as Western firms exited en masse. And perhaps most important, in May, Russia leapfrogged over Saudi Arabia to become China’s top oil supplier.

But some experts say that Beijing’s friendship with Russia is only surface level, and that its skyrocketing oil purchases don’t tell the whole story: China will take advantage of some cheap Russian crude, but it’s walking a fine line trying to secure its own economic interests without triggering Western sanctions.

Putin’s assault on Ukraine in February hit Beijing and Moscow’s “no limits” friendship with its first serious stress test.

As Western nations sanctioned Russia, global buyers of Russian oil retreated and Moscow was forced to slash its crude prices to lure other customers. China gobbled up the cheap Russian oil. Russian Urals, the benchmark for Russian crude, was down 30% by April. Chinese imports of Russian oil grew from 5.42 million tonnes in February, to 6.39 million and 6.55 million in March and April. By May, that figure ballooned to 8.42 million tonnes—equivalent to 1.98 million barrels per day (bpd)—up 55% by volume from a year earlier, according to Chinese customs data. China extended its record imports of Russian crude in June, with seaborne oil shipments and pipeline supplies on track to total 2 million bpd, analysts say.

China felt something akin to an “obligation to take advantage” of Russia trying to move its crude at bargain prices, Edward Chow, senior associate of energy security and climate change at the Center for Strategic and International Studies (CSIS), said during a July 8 webinar hosted by the Atlantic Council, an American think tank focused on international affairs.

“If you’re a teapot refinery in Shandong, and someone is selling you oil at a 30% discount, you buy it,” Chow said.

The same is not true for China’s large, state-linked oil firms.

Unlike Russia, China is not being directly sanctioned by Western countries over Ukraine. But secondary sanctions against China would pressure global companies, like financial institutions and technology providers, to stop working with the sanctioned Chinese parties.

American officials have acknowledged that Beijing, so far, is complying with global sanctions against Russia. But as the war drags into its fifth month, the likelihood of the U.S. and its allies imposing secondary sanctions against China is “now at an all-time high,” according to the Atlantic Council. In late June, for the first time since the war began, the U.S. took action against China by adding five Chinese companies to a trade blacklist for supplying the Russian military and “entities of concern.”

It’s unsurprising that China’s large, global oil firms are “proceeding with caution when it comes to doing business with Chinese entities,” Downs told Fortune. The “reality [is that] they do not want to lose access to the global financial system,” she says.

Oil investments, unlike oil trading, involve financial exposure that lasts not for a few months but for several decades, Chow told Fortune. Because the length of Russia’s invasion of Ukraine is uncertain, and the extent Western countries will go to impose secondary sanctions is also unclear, China’s oil giants will be especially cautious investing in Russian energy projects, Chow says.

China’s economic ties with Russia “pale in comparison to [its] activities with the U.S., Europe, Japan” and other partners, he told Fortune. The risk of harming its business ties with bigger partners because of Russia is “too great,” he noted, particularly during a fraught time for a Chinese economy struggling with lagging growth, weak consumption, and continued COVID outbreaks.

Cheap Russian fuel has been a boon to China over the past few months, and a major help to Russia as it continues to wage war on Ukraine and subsidize its economy as global firms retreat.

As the EU phases out Russian fossil fuels, Moscow is likely angling for more energy investment from Beijing, experts say. But the ball is in Beijing’s court as to whether or not it wants to substantially deepen energy ties with Russia, Downs said.

There are several projects coming up that could boost the flow of Russian energy to China. The two countries are currently discussing a potential Power of Siberia II natural gas pipeline, a major energy project that would double Russian gas exports to China by an additional 50 billion cubic meters. Russia would transport the fuel overland (via Mongolia), making this project attractive to Beijing—because it views overland routes as more secure than oil that travels through the Strait of Malacca—and especially if the supply can be secured at a discounted price, Downs says. Discussions for a third pipeline are also underway.

But Beijing is intently weighing these benefits against the fact that the second pipeline, on top of existing Sino-Russian oil agreements, would potentially make China overly reliant on Russia. One crucial element of China’s energy security strategy is diversifying its energy suppliers to “avoid being too dependent on any one supplier,” Downs says.

And China is hedging its bets by negotiating major energy deals with other countries. In the past year, China has inked 23 mammoth long-term contracts for 27 million tons of liquefied natural gas (LNG), with three-quarters of the sellers located in the U.S., Qatar, and Russia.

Chinese firms signed 10 long-term contracts for up to 14.8 million tons of LNG from U.S. suppliers from January 2021 to this April, like Chinese state oil firm Sinopec’s 20-year, $30 billion supply agreement with Louisiana-based Venture Global—which will double U.S. LNG imports to China. These contracts, and the fact that China has stood by them, show that the country is prioritizing diversification over price alone, experts say.

According to Downs, the war only underscored that “diversification is the right strategy for China.”