Kansas just turned out in record numbers to stop an abortion ban. Here’s what that could mean for other elections this year 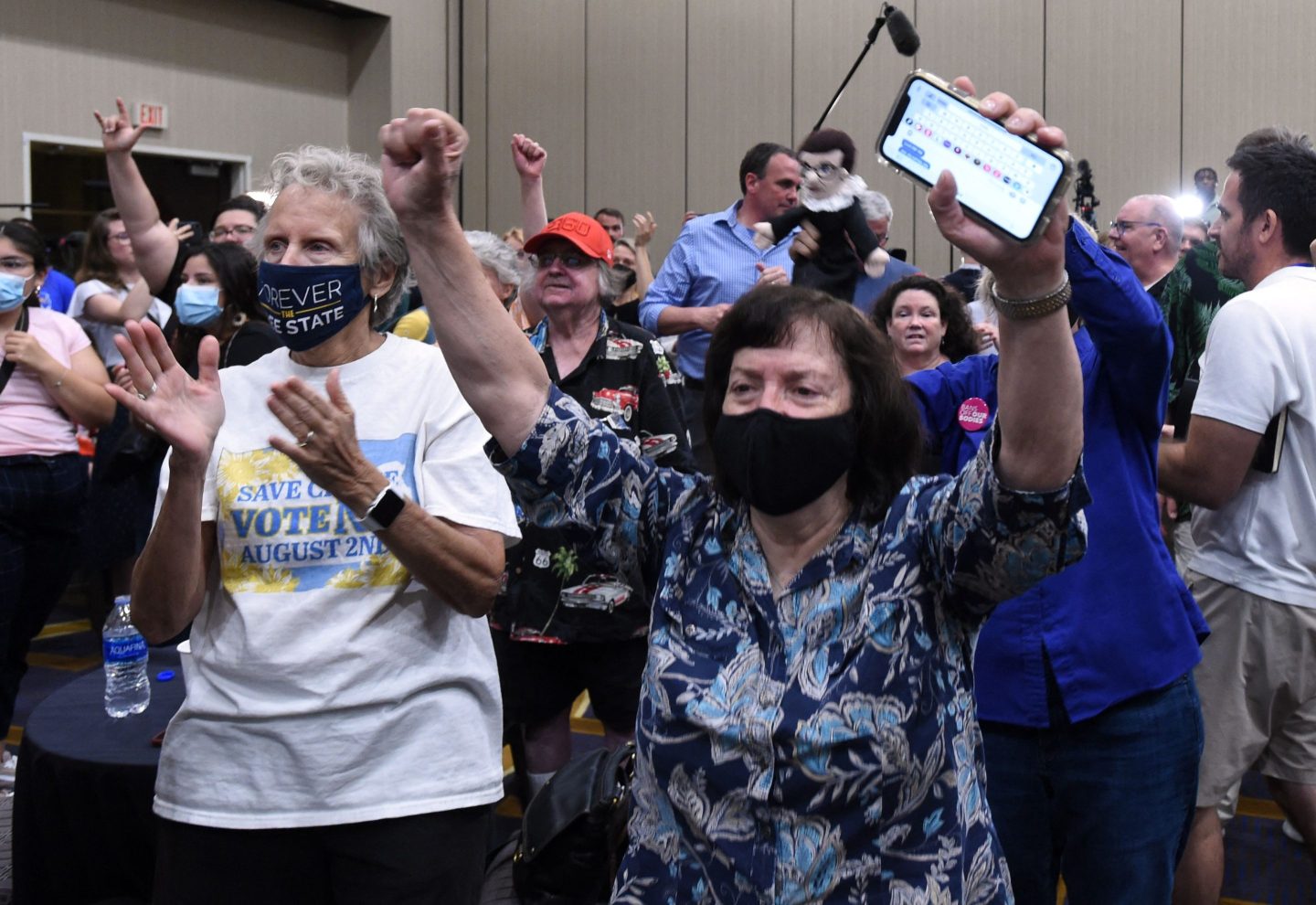 All eyes were on Kansas this week as the state voted on a constitutional amendment that would have banned abortion access.

The vote was anticipated to be close in the historically red state, which hasn’t voted for a Democratic president since 1964, with strong campaigning on both sides of the issue.

The election was the first time since the overturn of Roe v. Wade in June that Americans had the opportunity to voice their opinion on abortion access and reproductive rights at the polls. And experts told Fortune the Kansas election shows that abortion is an issue that will motivate voters, and could spell trouble for the Republican party in the upcoming midterms.

John Mark Hansen, a professor of political science at the University of Chicago, told Fortune that reproductive rights have the potential to sway voters more than other issues this year.

Although the majority of Americans are in favor of abortion access, some recent op-eds have speculated that they don’t care enough to vote on it.

The Kansas vote seems to have dispelled that theory.

This vote didn’t happen during a general-election year, making the high turnout particularly significant. In the 2018 Kansas primary election, for example, voter turnout was just 27%, doubling later in the year for the general election. On Tuesday, turnout was near general-election numbers of around 47%, and counties are still counting remaining ballots.

When all votes are finally tallied, “it’s probably going to be somewhere in the neighborhood of 50%, which for a primary election in an off year is awfully good,” says Hansen.

A significant part of that turnout likely came from unaffiliated voters, who make up 30% of registered voters in Kansas, compared to Democrats who make up 26% of the electorate.

The pro-choice advocacy group Kansans for Constitutional Freedom has cited those unaffiliated voters as central to its effort to combat the Kansas abortion ban, and argues that reproductive rights are not a solely partisan issue.

“We talked to voters across the political spectrum and made sure that they were educated on what the actual stakes of passing this constitutional amendment would be for Kansas,” said Rachel Sweet, the organization’s campaign manager, when asked about its strategy with unaffiliated voters in a press conference following the election. “This is an issue that transcends partisan boundaries.”

Pat Egan, an associate professor of politics at New York University, told Fortune that the turnout in Kansas likely hints that there will be similar uptick in voter turnout in other states where abortion is on the ballot this year, either through similar written measures or where pro-choice candidates are vying for seats.

“One of the things that this election tells us is that we’re going to see big surges and turnout in any race that’s focused on abortion,” he says.

There are several elections in 2022 that will be focused on abortion access.

Left-leaning California and Vermont will ask voters to approve greater protections for reproductive rights than are already in place. Meanwhile, measures similar to Kansas’ amendment to restrict abortion access will be on the ballot in Montana and Kentucky.

But even if reproductive rights are not explicitly on the ballot in every state, Egan says they will impact any tight race between candidates from opposing parties this fall.

“Whether or not abortion is on the ballot literally, it’s on the ballot in practice, and that’s going to drive a lot of voters to the polls,” says Egan.

Democrats until now have been looking at an uphill battle in this year’s races. High inflation, gas prices, and steady talk of an imminent recession have all made Biden’s popularity numbers sink. History also shows that the president’s party often does poorly during midterm elections.

But if voters believe abortion is on the ballot, that could change their voting calculus, according to both Egan and Hansen.

This could particularly apply to gubernatorial races in states with a conservative legislature. For example, in Michigan, where Democratic Gov. Gretchen Whitmer will face Republican candidate Tudor Dixon, voters will essentially be deciding the state’s stance on abortion as well. Michigan currently has a dormant abortion ban from 1931 on the books. If Dixon wins, she could allow a current injunction on the ban to fall away, and the state could lose its current status as an abortion haven.