‘We’re stuck with this white elephant’: A Wisconsin town’s big bet on electronics maker Foxconn hasn’t panned out as planned 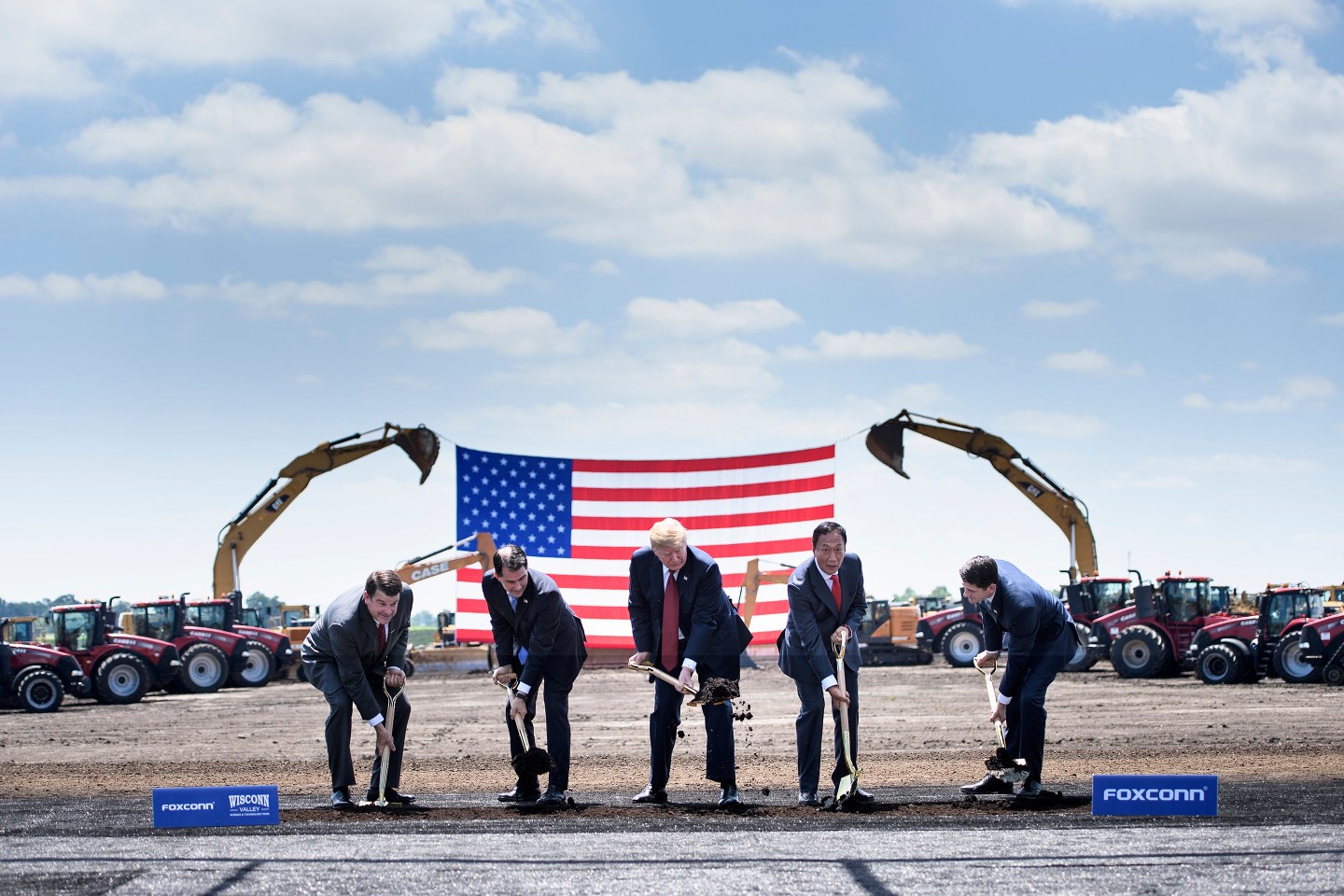 In 2017, Terry Gou, then CEO of electronics manufacturing giant Foxconn, announced in the White House’s East Room that his firm would spend $10 billion to build a state-of-the-art megafactory in Wisconsin that would make LCD television and computer screens. “We are committed to creating great jobs for American people,” Gou said at the press conference, promising 13,000 new jobs for Wisconsinites.

The announcement spawned the Wisconn Valley Science and Technology Park and the aspiration that the cornfields of southeastern Wisconsin could become a global tech hub with the help of Foxconn, best known for producing iPhones for Apple. “We believe this will have a transformational effect on Wisconsin, just as Silicon Valley transformed the San Francisco Bay Area,” Wisconsin’s then-Gov. Scott Walker declared at the press conference, alongside then-President Donald Trump and top Wisconsin lawmakers.

Now five years into the experiment, so-called Wisconn Valley has failed to live up to expectations. Instead of a sprawling 20-million-square-foot factory complex, Foxconn has built a far smaller campus. There is a 1-million-square-foot warehouse, a 260,000-square-foot “smart manufacturing center,” a 120,000-square-foot “multipurpose building,” and a 100-foot-tall glass globe that bulges from otherwise empty farmland like an otherworldly “orb,” says Gordon Hintz, a member of Wisconsin’s state assembly.

Nobody is quite sure what the buildings are being used for, though it’s clearly not manufacturing. “The whole thing has just been a joke,” says Hintz.

But the town of Mount Pleasant, home to the project, isn’t laughing.

The government of Mount Pleasant and that of its county, Racine, collectively borrowed nearly $1 billion to fund Foxconn’s incentive package. The town now depends on Foxconn’s tax bill to pay off that debt.

But with Foxconn’s annual tax bill set to soar from $16.6 million in 2021 to at least $36 million from 2023 until 2047, and the site generating little apparent revenue, local residents fear Foxconn could back out and leave them on the hook for hundreds of millions of dollars. The scramble is on to salvage enough of the initial Wisconn Valley dream to keep the town of 27,000 people afloat.

A few months after the White House announcement about Foxconn’s plant, Mount Pleasant was unveiled as the chosen site. At the time, it was easy to buy into the hype—especially considering Foxconn’s eye-popping $10 billion commitment. “We are a Rust Belt city who has lost a tremendous amount of manufacturing jobs over the last couple of decades,” says Kelly Gallaher, a Mount Pleasant resident of 29 years. The factory felt like it could be “a magic bullet that was going to bring manufacturing back,” she says.

But the plan drew skepticism when details about it began to trickle out. Gallaher, now a vocal critic of the project, soured on Foxconn after realizing the municipality had begun threatening to seize land from her neighbors under eminent domain to make room for the factory. “The time in which we went from being excited to very worried was about 72 hours,” says Gallaher.

Building an LCD factory in Wisconsin makes little sense in isolation. Some thought the Foxconn factory, far from Chinese supply chains and cheap labor, would struggle to operate efficiently. “It just doesn’t work in the U.S.,” says Victor Shih, a professor of Chinese finance and politics at the University of California at San Diego.

To pay upfront for the Foxconn site and infrastructure such as water pipes and road upgrades, Mount Pleasant created a special district, called a tax increment financing, or TIF, district. It allowed the town to borrow $911 million on an annual budget of $23 million. “Let’s say you have an income of $50,000,” says Lawrence Tabak, author of Foxconned, a book about Foxconn’s Wisconsin factory. “That would be like buying a $10 million house and then trying to figure out how you’re going to pay the taxes and mortgage debt.”

At the time, the theory was that the TIF district would quickly pay for itself. Foxconn’s rapid development of the property would generate enough revenues and raise the property’s value to let the town levy higher taxes on the company.

Yet Foxconn never found a productive use for the land. After abandoning plans to build LCD panels, offering no explanation as to why, Foxconn has pledged at various times to make electric vehicles, a vaguely described “AI 8K+5G ecosystem” tech product, ventilators, and robots that make coffee.

In 2020, news site The Verge reported that Foxconn employed hundreds of people at the site, at least some of whom didn’t know what their jobs were. The implication was that the workers were hired for the sole purpose of meeting minimum requirements for Foxconn to continue receiving installments from a separate state incentive package.

But Wisconsin had some protections. The state funding of up to $4.8 billion was structured around tax incentives that would be doled out over 15 years and tied to specific benchmarks. Last year, after it was deemed that Foxconn had failed to live up to its end of the agreement, Wisconsin and Foxconn renegotiated that package. The state slashed its tax incentives to $80 million. At the same time, Foxconn’s investment commitment tumbled from $10 billion to $672 million, and it cut its pledge of 10,000 jobs to merely 1,454 by 2025.

Even the factory project’s backers agree that Mount Pleasant has a lot more riding on the success of Foxconn’s campus than either Foxconn or the state government. Wisconsin has agreed to cover 40% of Mount Pleasant’s debt should Foxconn bail, but otherwise Mount Pleasant would be on the hook. “There’s absolutely no way they can pay off the debt” if Foxconn stops paying its taxes, Tabak says.

But Alan Yeung, former director of U.S. strategic initiatives at Foxconn and author of Flying Eagle, a book about the Wisconsin project, dismissed the idea that Foxconn would ever renege on its tax commitment. “It’s not only groundless, it is irresponsible to speculate,” he says.

Foxconn has built only a fraction of the industrial space it had initially promised in Mount Pleasant.
Mike De Sisti—Milwaukee Journal Sentinel/Imagn Content Services

Another reason to believe the manufacturer will pay its annual tax bill is that $36 million is “not a lot for a company like Foxconn,” says Shih, the UC–San Diego professor. Indeed, it represents a small fraction, just 0.02%, of Foxconn’s $181 billion in annual revenues.

Others aren’t so sure.

Doug Fuller, an associate professor at the City University of Hong Kong focusing on high tech in Asia, points out that Gou, the Foxconn founder, is a “notorious cost-cutter.” Those traits are partly why Gou has been so successful and also why he may try to find a way to back out of the tax bill, Fuller says.

Tabak referenced a 2018 news article based on leaked emails between Foxconn and local Wisconsin officials showing that top Foxconn executives had complained about the high price of hotel rooms in nearby Milwaukee. “If they’re unwilling to pay $200 a night for a hotel, what makes you think that they’re going to pay [$36 million] a year for nothing?” Tabak says.

Hintz, the assembly official, cautions that it’s too early to declare Foxconn’s site dead. It’s still a “viable project” that could provide jobs and tax revenues for Mount Pleasant, even if it may not be on the scale of Foxconn’s initial plans, he says. Electric-vehicle startup Fisker and chip giant Intel both recently considered setting up factories on Foxconn’s site before backing out. There’s hope other companies will eventually commit.

Yeung says that five years on, it’s still too early to judge whether the project is a success and that Foxconn could still build a successful factory in Mount Pleasant or lease it to another manufacturer. “I am still a believer in Wisconn Valley,” he says.

But where some see potential, others see a colossal waste of time and resources.

“We are stuck with this white elephant,” says Gallaher, the local resident, “in the form of a gigantic, billion-dollar dirt farm.”

The following shows how Foxconn’s project has been scaled back over time.

This article appears in the August/September 2022 issue of Fortune with the headline, “Fleeting tech factory dreams.”