The revival of the Tour de France Femmes was a major victory for women’s cycling, but the fight for equity in cycling is far from over 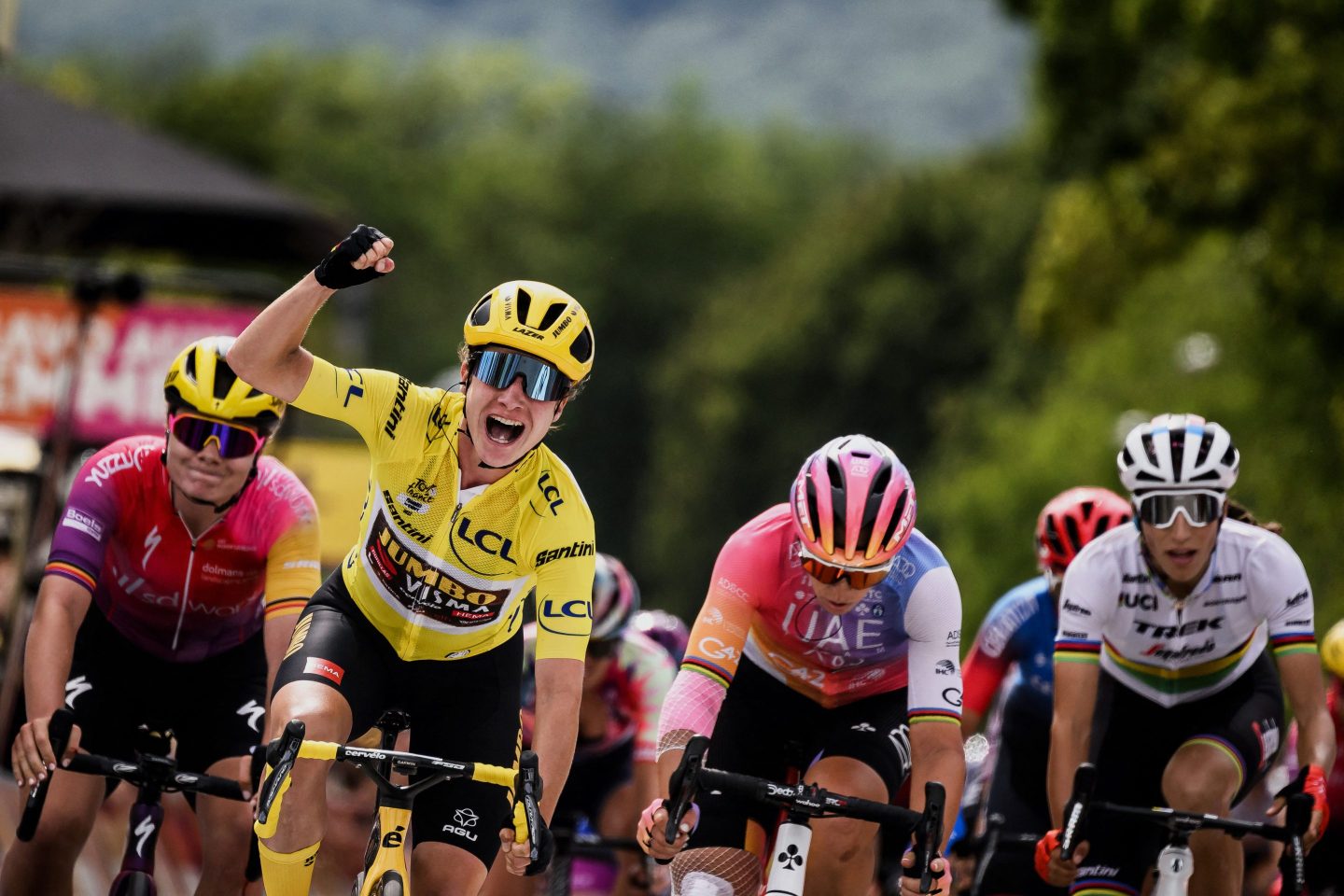 – Long road to equal pay. By the time Marianne Martin quit competitive cycling in 1986, she’d accumulated over $10,000 in debt.

“That was a lot back then. It was certainly a lot for me,” Martin tells Fortune. The debt, coupled with health problems (which she also didn’t have the resources to care for), forced her to leave cycling earlier than planned, leaving her with limited career options. “I put my nose to the grindstone and I paid off [the debt] in a year and a half, but it was definitely a factor in me choosing my life direction after sports.”

Martin won the Tour de France Femmes, the women’s version of the prestigious Tour de France, just two years before her departure from cycling. She was the first American to win any Tour de France race. But in 1989, the women’s race was canceled due to waning support and a lack of financial backing. Women wouldn’t have a race comparable to the Tour de France until this year—a 33-year absence—thanks to a nearly decade-long campaign to bring it back. The race concluded yesterday, with Dutch cyclist Annemiek van Vleuten coming in first.

While the Tour de France Femmes’ revival marks a significant victory for women in professional cycling, not much has changed since the 1980s.

But the gender disparity in cycling doesn’t end with prize money. For many women, the sport has long been exclusionary, with sparse access to funding that would allow women to compete in the first place.

The world governing body for cycling, the International Cycling Union (UCI), did not implement a minimum wage for women cyclists until 2020—a standard already in place for men. This year, the minimum salary for the women’s WorldTeam was $31,000 compared to $44,000 for the men’s ProTeam. The UCI has promised to standardize the minimum wages for both teams by 2023.

As for sponsorships, support for individual cyclists is uncommon and usually goes to teams, says Ayesha McGowan, who became the first Black woman to compete in pro cycling in 2014. Many female cyclists rely on a second job or family support to supplement their cycling salaries.

“There’s a saying that the women’s peloton is probably one of the most educated bunches in the world,” says McGowan, who rides with the Netherlands-based Liv Racing-Xstra WorldTeam. Sixty-five percent of female Continental riders—the UCI’s second-tier team—work a second job or rely on support from family, according to the 2022 Rider Survey from the Cyclists’ Alliance, a union representing female cyclists. The same goes for 25% of top-tier World Tour riders. “I have a teammate who’s a doctor. It’s not uncommon to see women in the peloton, even now, still having second jobs or other employment.”

“We need to get more women in the sport. Unless there’s better pay and better financial support, we’re not going to get it. It’s a catch-22,” says Martin. Data on gender-based participation in cycling is sparse, though one study from the International Journal of Environmental Research and Public Health found that women’s participation in ultra-cycling races varied from 3% to 11%.

Increasing women’s participation in cycling inevitably requires increased financial support. Martin and McGowan are some of the backers of the Strive for More pledge, started by the fitness platform Strava and the Cyclists Alliance. The $1 million commitment aims to bring more women into competitive sports over the next three years.

“There are so many people who don’t have the resources to be a part of this sport. It’s expensive and it’s not super accessible on a high level,” McGowan says. While she notes that many, including herself, are introduced to cycling through commuting, it’s hard to translate that to competitive cycling. “With bike racing, the equipment and the necessities that you need to be an active participant adds up very quickly. And so it’s super helpful to have those resources.”

Martin hopes that Strive for More will provide women cyclists with more options than she had once they choose to move on from the sport.

“I went into debt to do what I wanted to do. It was stressful. It gave me limited choices when I quit racing to move into what might have been my ideal career because I had to get money right away,” she says. The pledge is “making it possible to have some financial support along the way. And when they move on from it, they’re not burdened with this immense debt that I was burdened with.”

- Itinerary secrets. House Speaker Nancy Pelosi departed on a trip to several Asian countries on Friday, including Singapore, Japan, South Korea—and possibly Taiwan. Pelosi remains mum on the decision to visit the Chinese territory, which no U.S. official has visited in over 25 years. But the possibility has caught the attention of Chinese President Xi Jinping. State media reports Jinping warned against Pelosi’s possible stop in Taiwan during a call with President Joe Biden on Thursday, saying “those who play with fire will eventually get burned.” On Monday, U.S. and Taiwanese officials confirmed that Pelosi expects to visit Taiwan, though it still remains off her public itinerary. Politico

- Volatility be damned. Grocery delivery service Instacart still plans to follow through with its IPO, even as other companies back away from their IPO plans amid high volatility. The company, led by CEO Fidji Simo, first announced its intention to go public via an SEC filing in May. It saw a boon during the early parts of the pandemic, but shrinking demand led investors to cut its valuation from $39 billion in 2021 to $15 billion this May. Still, the company reported profitability in its second quarter. Wall Street Journal

- Tension, or no tension? During a May interview made public on Thursday, Justices Sonia Sotomayor and Amy Coney Barrett insisted that relations between the justices have remained warm and cordial. “We have life tenure, so we get along. You’re not going to rupture relationships with people you’re going to be spending your career with,” Barrett said. But just the day before their interview, conservative Justice Clarence Thomas likened the Dobbs draft opinion leak to infidelity, and said there was a loss of trust in the court. New York Times

MOVERS AND SHAKERS: Gannett Newspapers executive Sheila Rayam has been named the next executive editor of the Buffalo News.

- Jetpooling. Kylie Jenner is no longer the only celebrity catching ire over private jet use. Taylor Swift, Kim Kardashian, and Oprah Winfrey actually rank worse than Jenner for excessive jet use, according to Yard, a U.K. based sustainability marketing firm. Swift came in first on the firm's ranking, taking 170 flights so far in 2022 and emitting a total of 8,293.54 tonnes. Swift's team pushed back on the ranking, insisting the jet is loaned out to other individuals and that attributing all of the jet's trips to her is "blatantly incorrect." Business Insider

- Star treatment. A Spanish prosecutor is seeking an eight-year jail sentence and a $23 million fine for Colombian singer Shakira as part of her tax fraud case. The “Hips Don’t Lie” singer is accused of evading as much as €14.5 million in taxes between 2012 and 2014 by living in the city of Barcelona but maintaining a fiscal residence in the Bahamas; Shakira denies the allegations, insisting she didn't move to Spain until 2015. She lost an appeal to dismiss the case in May, and turned down a settlement deal that would have avoided court hearings last week. Fortune

- SCOTUS gloating. Supreme Court Justice Samuel Alito mocked foreign outcry over the Court’s decision to strike down Roe v. Wade during a speech made public on Thursday. In his first public speaking engagement following the decision, in which he addressed the Notre Dame Law School's Religious Liberty Initiative in Rome, Alito said he wrote the first opinion to be “lambasted” by foreign leaders, including outgoing U.K. Prime Minister Boris Johnson, Canadian Prime Minister Justin Trudeau, and Prince Harry. He then joked that Johnson “paid the price” for his remarks that the decision was “a big step backwards,” suggesting some tie to Johnson’s subsequent resignation. CNN

- Tough gig. It doesn't pay to be in Hollywood, according to Euphoria actor Sydney Sweeney. Though she was able to buy a $3 million home in the Hollywood Hills, the actor had to score commercial deals to afford other necessities like her management team, saying she couldn't afford life in L.A. with "just acting." Sweeney is paid $25,000 per episode of Euphoria; for contrast, Jennifer Aniston was paid $22,500 ($39,000 in today's currency) per episode during the first season of Friends. Fortune

“Creating this album allowed me a place to dream and to find escape during a scary time for the world. It allowed me to feel free and adventurous in a time when little else was moving… It was a beautiful journey of exploration.”

-Beyoncé, whose seventh album, Renaissance, was released on Friday.