The FTC wants to block Meta’s ‘illegal’ acquisition of a small VR fitness app, because the social giant is trying to ‘buy market position’ instead of earning it 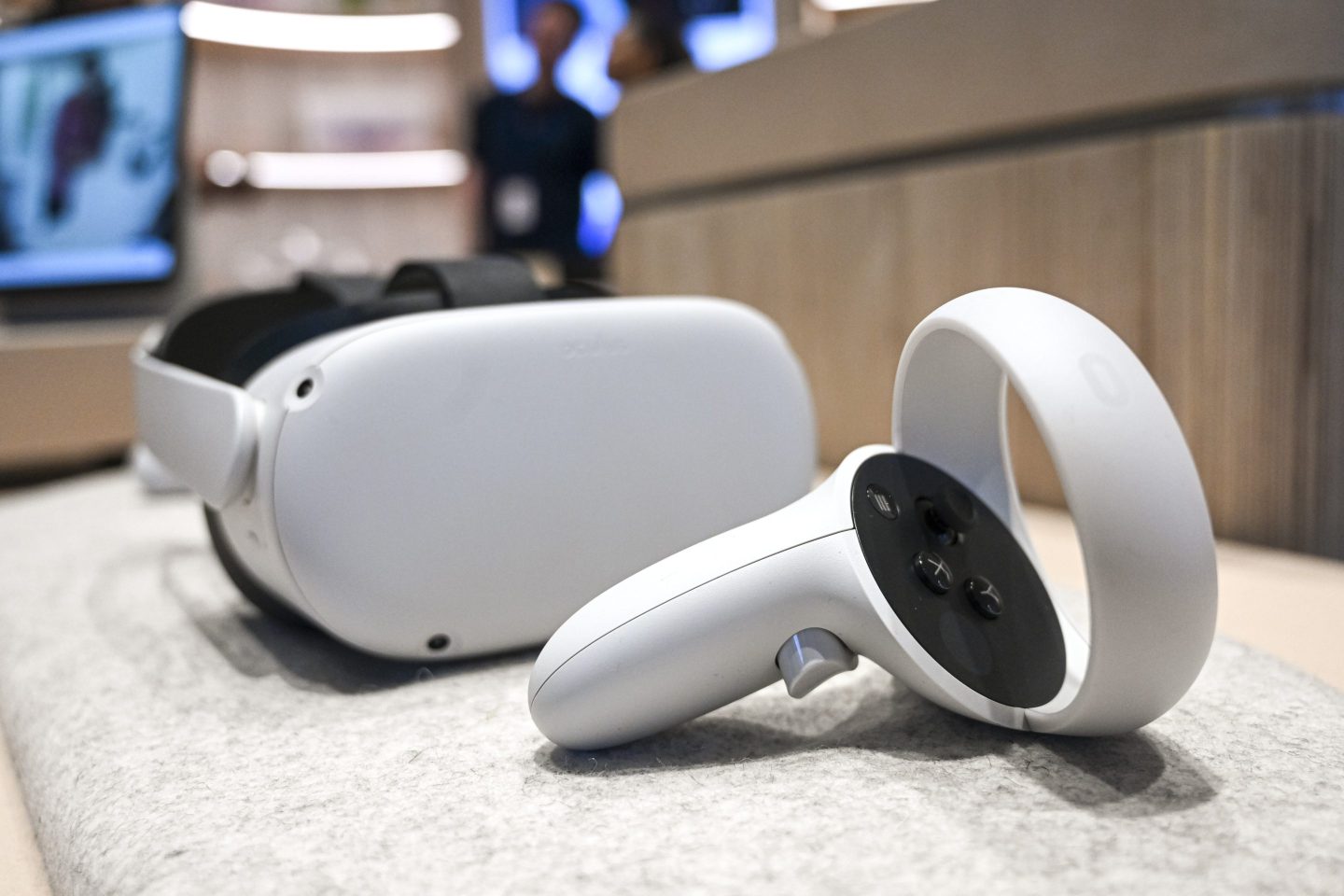 A Meta Oculus Quest 2 virtual reality (VR) headset during a media preview of the Meta Store in Burlingame, California on May 4, 2022.

The FTC said the acquisition of Within, which develops apps for VR devices, including the popular fitness app Supernatural, would “tend to create a monopoly,” according to the complaint, which was filed in federal court in San Francisco Wednesday.

Meta has made a number of acquisitions, most of them small, to bolster its offering in virtual and augmented reality. Chief Executive Officer Mark Zuckerberg believes that in the future, the company will popularize a metaverse—a more immersive version of the internet, where people can populate an alternative virtual world to go shopping, go to work and see friends.

Meta, which announced its plan to buy Within in October, is the world’s top VR headset maker with its Oculus product controlling about 80 percent of the market, according to research firm IDC.

Virtual reality is a small but growing slice of the consumer technology industry. Meta has identified the space as its next big bet, requiring big investment. The company’s Reality Labs division reported an operating loss of $10.2 billion in 2021, and Zuckerberg has said that investments in virtual and augmented reality will lead to “significant” losses early on.

“Mr. Zuckerberg has made clear that his aspiration for the VR space is control of the entire ecosystem,” the FTC said in the complaint. “The proposed acquisition of Within would be one more step along that path toward dominance.”

The FTC has also sued Meta over its 2012 acquisition of photo-sharing app Instagram and the 2014 WhatsApp transaction, arguing the company sought to buy up nascent competitors to keep them from challenging Facebook, its social networking product. That lawsuit, filed in 2020, remains ongoing. Meta argues that the transactions were lawful.

“The FTC’s case is based on ideology and speculation, not evidence,” said Meta spokesperson Christopher Sgro. “The idea that this acquisition would lead to anticompetitive outcomes in a dynamic space with as much entry and growth as online and connected fitness is simply not credible.”

The antitrust agency has faced significant criticism from Congress and antitrust advocates for allowing the biggest tech companies to acquire startups that might grow into rivals. In a 2021 report, the FTC found the five tech giants—Alphabet Inc., Apple Inc., Amazon.com Inc., Microsoft Corp. and Meta—acquired hundreds of smaller firms over the previous decade, often using loopholes in antitrust law to avoid notifying antitrust regulators about the deals.

Meta reports second-quarter earnings after the market close on Wednesday. Analysts expect a 29.6% decline in earnings per share on flat revenue compared with a year earlier due to a slowdown in advertising spending that’s left technology giants competing for fewer marketing dollars.

The FTC voted 3-2 along party lines to bring the case, with the agency’s two Republican commissioners opposed. The FTC asked the court to temporarily halt the transaction, which Facebook said it plans to close on July 31. The agency also sought an injunction blocking the deal on antitrust grounds.

The case is FTC v. Meta Platforms Inc., 22-cv-4325, US District Court for the Northern District of California (San Francisco).

—With assistance from Joel Rosenblatt.